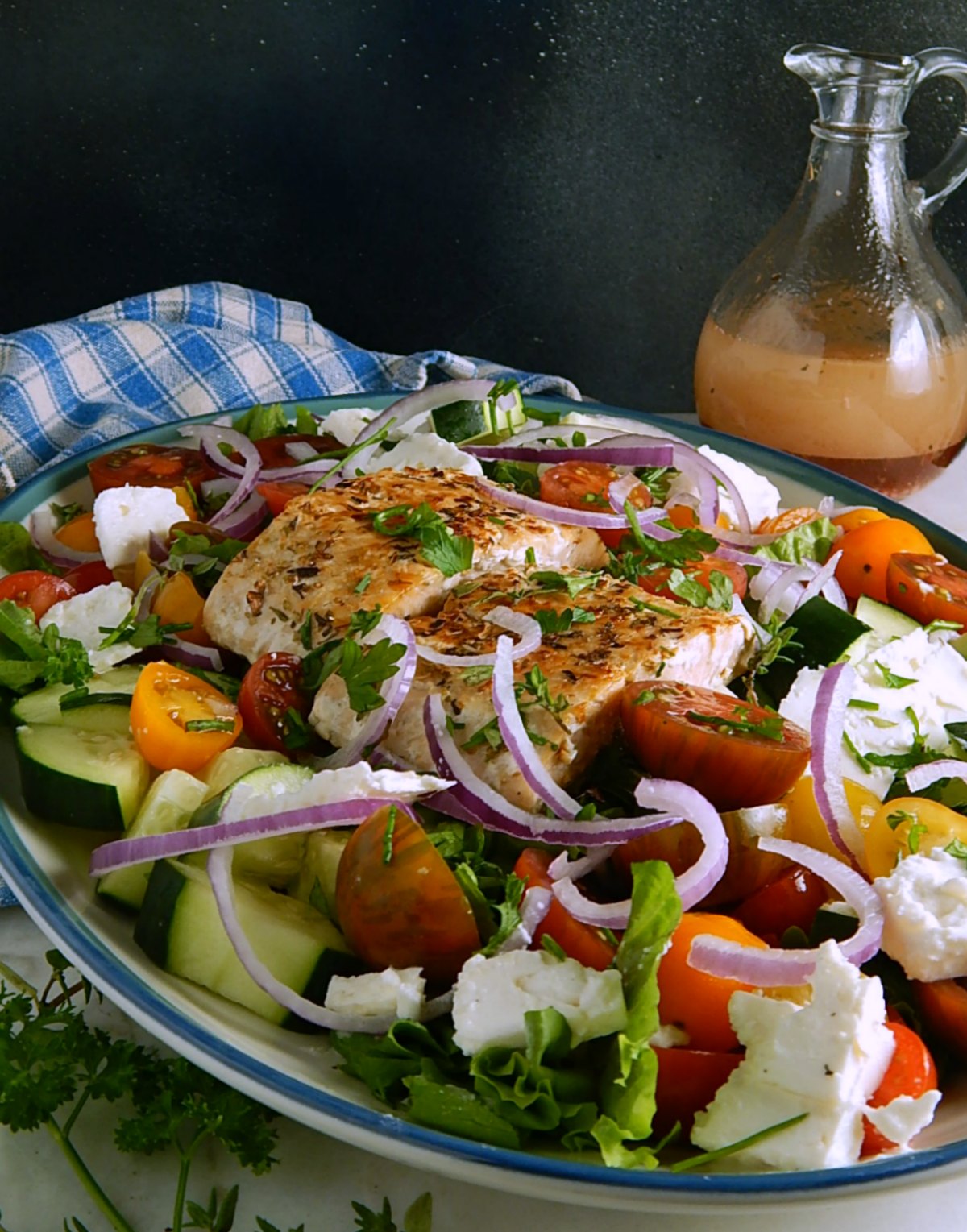 Our summer has gone from cold, cool and rainy to hot, humid and rainy in a snap of the fingers! I don’t know about you but I just go limp when it’s too hot and humid. I don’t want to do anything, I don’t want to eat and I sure as heck don’t want to cook. And then when I do get hungry? I make bad choices. My solution? Make a great big ol’ salad and top it off with a quick & easy protein and a fabulous dressing. And so here’s my Mediterranean Salmon Salad.

I’m betting everyone in your family will find something to love about this salad, and if the idea gives you pause, this salad is so easy to tweak. If you have a family of meat lovers, add more salmon and let the veggies take a secondary role. If they don’t like fish, sub in chicken. If your worried the kids won’t eat the sharp dressing, add some yogurt to their portions and it will turn into a milder, creamy dressing. And of course, add in more or less of any of the ingredients to suit their taste.

I know my kids weren’t the greatest salad eaters when they were young, but they would pretty much go for tomatoes and cucumbers without a problem and of course, loved big old salads like this when they were a little older. Even if they just picked and chose and at least ate a few of the veggies, I considered that a win! I’ll never forget the time my son came in from playing (around age six, I think) forked down the salmon, ate a couple of tomatoes and said, “Great chicken Mom. Can I go out and play, now?”

The salad portion of this dish is really Greek in nature. Tomatoes, cucumbers, red onion on a bed of sturdy lettuce. Romaine is great; curly green lettuce works well, too. I kept the salad portion simple but you could add in olives and/or pepperoncini or bell pepper or anything else you like. Then there’s the dressing; my Classic Greek Vinaigrette kind of takes this to the next level. If you’re in a hurry, sub in a store-bought option. And the salmon, quickly marinated while you prep the salad and baked off (that takes just minutes) tops it all, along with some shavings of Feta and a few herbs from the garden.

You might notice that I only have two small salmon filets on top of my salad. That’s because I love to use this for meal prep, since it’s only me here, now. The veggies are sturdy enough to last for several days, but the salmon has a limited time in the fridge. The salmon cooks so quickly, it’s not a problem to quickly knock off a couple more pieces later in the week to complete the meal, or I can just go vegetarian and eat it as is. I do serve the dressing on the side for meal prep. The cucumbers and tomatoes are no problem dressed, and just get better and better, but the lettuce can get wilty.

As you can see from the short list of ingredients, this is an easy, peasy salad to get on the table. If you remove part o the peel from the cucumber, it will leave you with some of the fiber but takes off a bit of the bitterness which lies in the peel. And that helps to make it more a-peal-ing to kids. Besides, it always makes them prettier. That’s optional. The tomatoes, though, really are best halved so the juices mingle in the salad, they absorb the flavor of the dressing, and they’re easier to manage and eat.

As for the salmon, let the vinaigrette do double duty. Just drizzle a little over the salmon before you start the salad (generally, you don’t want to marinate any fish more than 30 minutes) and bake it off for a few minutes. Put it on a bit of aluminum foil and turn the edges up slightly for no cleanup. Bonus! And of course, for this salad, you can make a portion per person of the salmon or make a little less and just flake it so it goes throughout the salad.

Go with a little salmon and flake it so all the portions have a bit or use a fillet per person; it’s all up to you and who much you wish to spend. Watch for fresh salmon at a low around any of the summer holidays, and many holidays throughout the year. Frozen can be a great option, too. I look for a great store special on frozen salmon through the Lenten season, prior to Easter so I always have some on hand. As you can imagine that is a more frugal option. If you ever have a little leftover Salmon, this salad is a great way to stretch it.

Buying Feta is never intuitive. If you have access to a Greek or Middle Eastern market, check there. The prices can be surprisingly low. I bought some fabulous Feta at Bill’s Imported Foods (just driving over to Minneapolis was a fun trip) for $4.99 a pound. The other day, I checked my grocery store. A block of Feta in a plastic package was $4.99 for 8 ounces. The crumbles, in the same sized package, right next to it was $3.99 for 4 ounces. The crumbles are never a good deal and always inferior, and I think people pick them up because they think they’re a dollar less than the block. The grocery store block Feta is $9.98 a pound, the crumbles are $15.96 a pound. By the way, if your crumbles are $3.99 and only contain three ounces like some I saw, that’s $21.28 a pound! You might want to see my post “What to Know About Feta” for more information on it.

You will always save money if you go with simple, chunked tomatoes rather than cherry tomatoes, but there’s no doubt the mixed cherry tomatoes add a bit of panache. Check Aldi for your veggies like tomatoes and cucumbers if you have one nearby. If not, let the sales guide you. It’s seldom that I don’t by more than one cucumber when I see them two for one and toss them in salads or in a little vinegar all summer long. If you have a choice, and tomatoes are at a great price pick up some perfectly ripe and a few more to ripen on the windowsill for the following week.

Preheat oven to 300 degrees. Place salmon pieces, skin-side down, as close together as possible on a piece of foil with the edges turned up, placed on a sheet tray. Drizzle with a little vinaigrette and season with salt and pepper. Let sit for up to 30 minutes while the salad is being made. Bake until just done, timing varies on the thickness of salmon; from 9 minutes and up to 12 or so, for a thick filet. Salmon should be just flaky but holding together well.

I’ll be sharing Mediterranean Salmon Salad at Fiesta Friday #283, cohosted this week by Antonia @ Zoale.com and Jhuls @ The Not So Creative Cook.