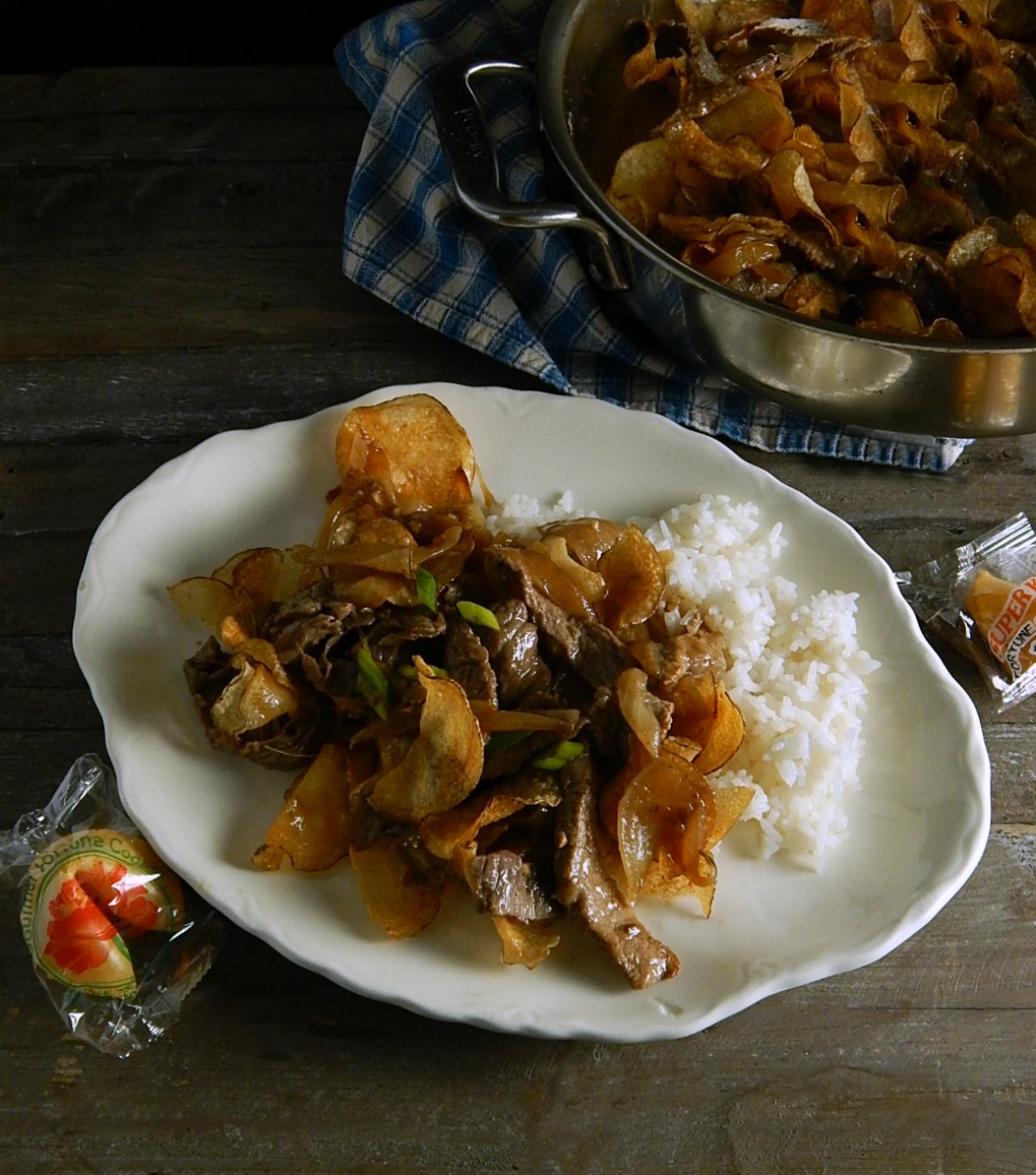 It’s easy to get a little confused with the history of some of the Asian dishes. It seems every region has its own spin…and that’s before we get to Asian/English, Asian/Island or Asian/American dishes! But Vietnamese dishes always seem to be unique in that some are heavily influenced by the decades of French rule. I think this might be one. Regardless, c’mon! Potato Chips & Beef and that lovely sauce! Who could resist?

Vietnamese Beef & Potatoes Bo Xao Khoai Tay is it is the last thing I would think to order at a Vietnamese restaurant. It was my son who got it and gave me a taste and I was hooked! I was like snitching from his plate and he was like (in that annoying way that turns the word into two syllables) Mo-om! I can hardly tell you how much I love this dish. Crave is probably a better word… and so I knew I was going to have to make a home version. I figured this would be a great recipe to post out because I think it’s the kind of Asian dish that everyone from small children on up would fall in love with, too.

The Vietnamese Beef & Potatoes Bo Xao Khoai Tay itself just seems so simple but all the flavors come together in a magical alchemy. Thinly sliced, flavorful beef, crisp/tender onions, and those potatoes – they’re crispy and delish and just glazed with the sauce. At my fave restaurant, those potatoes aren’t potatoes cut like hash browns, which is the version I most often see, or served over French fries like a marvelous Asian version of poutine. Nope, they’re thick potato chips. And when those potato chips mix with the sauce it’s out of this world delish.

Of course, there’s usually rice served alongside, which I usually just ignore unless there’s a lot of sauce. And I don’t want to waste a single drop of that sauce! Usually, I just attack the dish by eating all the crispy potatoes first, then move on to the beef and onions lurking below, along with any potatoes that have slid down into the depths of the dish and absorbed that sauce. (The rice in the pics is my favorite, Perfect Instant Pot Rice. The Instant Pot Rice is great when you’re focusing on the main part of the meal. Set it, and forget it!)

Vietnamese Beef & Potatoes Bo Xao Khoai Tay is deceptively simple considering the amount of flavor. There aren’t a lot of fancy ingredients; the sauce just has a handful of things, but one is Oyster sauce. That might not be available everywhere, and if it isn’t, just use a little Hoisin sauce, instead. You’ll want to marinate the beef for about an hour if you can. The potatoes in this dish are thin potato slices that are deep fried, but if you’d rather, use chunks of potatoes and skillet fry. Honestly, both have their drawbacks in terms of effort and time, but I think it’s easier to deep fry the potatoes than tend chunks of potatoes in a pan and I love the results.

The beef is thinly sliced, and that’s easiest to do with a very sharp knife, so sharpen your knife before you attempt that! If you toss your beef in the freezer for about 20 minutes before cutting, it makes it easier. Sometimes expensive cuts like filet or rib roast are used in Vietnamese Beef & Potatoes Bo Xao Khoai Tay. I just use round, thinly sliced against the grain and don’t overcook it and it’s perfectly tender.

It seems like most restaurants that serve Vietnamese Beef & Potatoes Bo Xao Khoai Tay are quite a bit heavier on the potatoes and onions and lighter on the beef. The restaurant I love gives me about five or six strips of beef in a huge portion. Many home versions call for a pound of beef, so how much you use is up to you. I like a ratio of about 12 ounces of beef to one onion and 2 medium-largish potatoes. You absolutely can tinker with the ratios and make it to suit yourself and your budget.

If you have a mandolin, some kind of cutter or food processor, it’s easy to cut the chips for this dish. Mine were actually just a bit thinner than my fave restaurant version so I’d go just a bit thicker in the future. Honestly, if you don’t have any kitchen equipment to help out and unless you’re determined to have your chips like potato chips, it’s still going to be great if you use chunks of potato about the size of a hash brown.

I usually twice fry my potato chips like this recipe for Best Potato Chips, but this time I borrowed a little trick I learned years ago from Cook’s Illustrated. I twice cook the potatoes. After they’re cut and rinsed off, put them in a microwave safe bowl, add more water, cover tightly with plastic wrap and nuke for a few minutes or until the very edges have turned a bit translucent but the potatoes aren’t cooked through. Watch and check them – they’re thin and should not be cooked through and if you go too far you won’t be able to fry them. Then I drain and pat dry so have about 4 clean kitchen towels and space for them on your counter. It’s an amazing trick that will make any French fry or hash brown or potato chip turn out just like a restaurant version without the hassle of twice-frying.

Note: A very smart friend & blogger (Cooking is Fun…Really!) suggested in the comments below that a good quality bagged potato chip can be used if you’d like to shortcut this recipe. If you aren’t going to be eating the full amount of the Vietnamese Beef & Potatoes Bo Xao Khoai Tay at one sitting, you can make all the chips up and set some of them aside and toss them in when you reheat the leftovers.

So many Asian dishes are light, full of veggies and absolutely healthy (It’s the way we cook “Asian” food in the US that gives it a bad rap. Piles of delicious meat, fried and then cooked in heavy sweet sauces. They’re hard to resist!) but I’m not sure that Vietnamese Beef & Potatoes Bo Xao Khoai Tay qualifies as healthy! Even with the fried potatoes, though, I think it’s better for you that some of those sticky sweet concoctions that can use up to a cup of sugar and you might find your family loves it even more. And there’s a bit of a balance, cost wise. Potatoes and onions are always dirt cheap so they stretch that pricier beef.

Because I want to tinker around with making a roast, I just picked up a sales priced one and sliced the beef for my Vietnamese Beef & Potatoes Bo Xao Khoai Tay off the edge. It’s actually a great strategy to take one pricier item and stretch it across more than one meal. I usually do that with leftovers but today I did that division up front. Look for beef to be at a low in the fall and around any holiday when beef is often the star, like Christmas, New Years or Valentine’s day. You’ll find the pricier cuts on sale and usually find the cheaper cuts at a low, often the following week. There’s only so many Filets and Rib Eyes and something has to be done with the lesser cuts so they get priced to move. Stock up your freezer!

I buy potatoes and onions in larger bags and store them apart, usually in paper grocery bags with the top folded over. With potatoes, buy the big bags if you’ll use them, and since they’re generally a variety of sizes, use the nice, large ones for bakers or when size matters and the smaller ones in recipes where it doesn’t. When I fry, I generally use a smaller diameter pan with tall sides – that makes it easy to use less oil. Then I strain and save the oil for another dish.

The Potatoes & Finishing the Dish:

Mix together beef and marinade ingredients. Set aside for one hour.

The Potatoes & Finishing the Dish:

Thinly slice potatoes into rounds the thickness of thick potato chips. Add potatoes as they’re sliced into a microwave-safe bowl filled with water. Swish potatoes around, then strain and discard water. Put potatoes back into the bowl, add water to cover, cover the bowl with plastic wrap and microwave for about five to six minutes or until potatoes are turning translucent on the edges. Remove, drain, then lay potatoes out on a thick, clean towels, cover with another and press to remove excess moister.

When ready to cook, heat oil to 350 degrees f. Fry potatoes in batches until golden brown, stirring now and then so potatoes will curl a bit, then when done, remove to a paper towel lined sheet tray, salt lightly.

In the meantime add oil to a large skillet. Heat to medium-high and add onions, cooking, stirring now and then until golden brown in spots and still crisp-tender. Add garlic and cook for a few seconds. Push aside and add beef to the center of pan. Spread it out and let the beef sit for a minute or two until it releases, then stir together and cook, stirring as needed, until just barely cooked through. Immediately add the water, soy and fish sauce, stir, briefly heat through and remove from heat. Taste and adjust seasonings, adding salt, pepper, more fish sauce or soy sauce or a pinch or two of sugar if desired.

Place the potatoes on top of the hot beef mixture and gently toss together. Serve immediately. If there is going to be a delay in serving, hold the beef mixture and potatoes separately then combine when ready to serve.

Garnish with green onion and serve with rice, if desired.

I came across a photo of Vietnamese Beef & Potatoes Bo Xao Khoai Tay from my fave restaurant on Yelp.