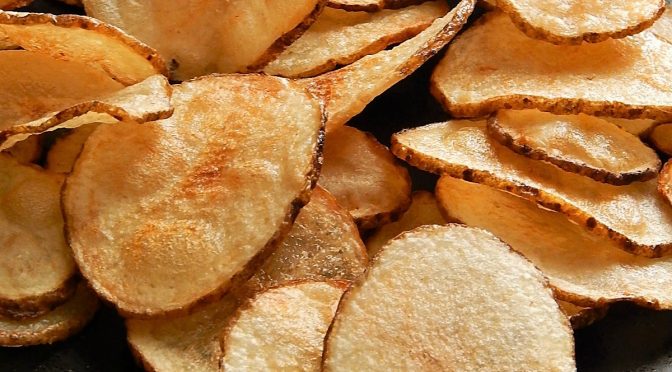 I don’t eat potato chips often, and I REALLY don’t make them often. Coz they’re a pain. I’m not gonna lie. It’s a messy endeavor; a production. There’s deep frying, and there’s that cutting (pull out the mandoline or the food processor) and then the standing at the stove, the cleanup.

But now that I think about it, frying these chips really isn’t more difficult than trying to do potato chips in the oven, with the hot oven, the turning, and all the attention. Either way is a little cray cray, but just look at the results of deep frying these!

But even if you don’t need crunchy home-made chips for a special dish, like McMullan’s Irish Nachos, just make them, sometime, just for fun. They’re sure to be a hit and one that people won’t forget. Seriously, they are a game-changer.

So you know they’re memorable, homemade potato chips. And they’ll make memories. And they’ll be very happy memories…at least until you tackle the cleanup!

Potatoes are dirt cheap and almost always on sale around St. Patrick’s Day and other holidays. Pick up a few extra when they’re at the low. Don’t store potatoes near onions, though. Potatoes should be stored in a cool, dark place.

The larger cost of making homemade potato chips is the cooking oil. You’re going to want an oil that stands up well to the heat. I don’t fry very often, but when I do, I will generally make something else with the oil, just so I feel I have maximized my use of it.

You can read more about leftover oil on my page for leftover oils, fats and drippings, which includes links to Alton Brown’s transcript for his Let There Be Oil episode. If you’re as geeky about food as I am, you’ll find it interesting. Links are at the bottom of the page.

Peel potatoes, if desired, and slice thinly, about 1/4 inch deep. Place in a container of water large enough to hold the slices as they’re cut.

When potatoes are all sliced, drain the potatoes and add about a cup of clean, warm water to the container. Add the sugar and salt and mix until dissolved. Add the potato slices back in and mix, then top off with cold water to cover potatoes. Brine for 30 minutes to overnight.

When ready to cook, add oil to a deep pot. Heat to 325 degrees F. While oil is heating, drain potatoes well and lay out on an absorbent towel. Cover with another towel and pat until dry.

Cover a large sheet pan with 2 layers of paper towels and have at the ready. Fry potatoes, working in batches until they just begin to pick up a little a little color. Remove and place on one half of the pan to drain.

When all the potatoes have their first fry, turn the heat until the oil reaches 365 degrees, F. Fry the potatoes a second time, in batches, until potatoes are crispy and lightly colored. Remove and place on the dry side of the paper towel covered sheet pan. If you need more room, layer on clean paper towels on the other side.

Salt while warm and serve immediately.

The teaspoon of sugar and salt is enough to brine 4 potatoes. If making a larger batch, increase both.

I’ll be bringing these chips to Fiesta Friday #215, hosted this week by  Laurena @ Life Diet Health and Alex @ Turks Who Eat. We’d all love it if you stop by & see a collection of recipes and posts by the fantastic food bloggers who’ve joined in.