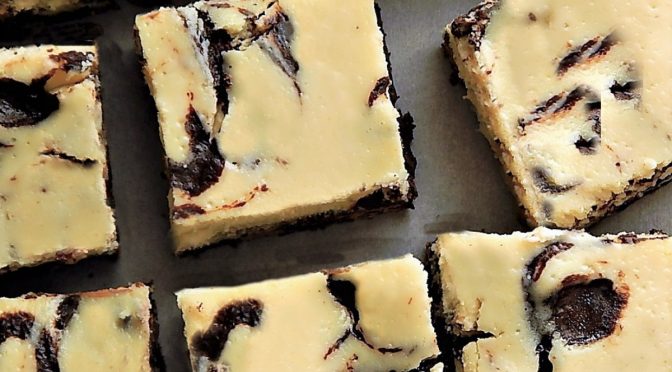 Hi guys! Hope you all had a great St. Patrick’s day on Saturday. I wish I would have posted these Really Bailey’s Cream Cheese Brownies before, so you all could have them for the celebration. You might want to pin them or save them or just make them anyway. With or without the hooch, they’re insanely good!

These brownies are amazeballs. Yeah, I had to go there! The brownie part is sturdy and fudgy, the swirled cream cheese layer just a beautiful thing. And best of all, they taste like they have a little Bailey’s Irish Cream in them.

I’ve tried a few Bailey’s Brownies before, but none of them lived up to my expectations. This year I had an “aha” moment. I consulted my recipe for Irish Cream, Reverse Engineered.

So essentially, in these Really Bailey’s Cream Cheese Brownies, the whole cream cheese topping really IS Bailey’s, just a very mild version. The Baileys flavor is subtle and not too strong and there are no worries about anyone getting tipsy. Each brownie has about 2/3rds of a teaspoon of whiskey. I personally wouldn’t have an issue with anyone eating these but I’m from an older generation; if you do, classify them as adult brownies or make them w/o the whiskey. Instructions are in the recipe.

These brownies have to be made ahead – you’ll want them cool before cutting. What’s interesting is that when they are made ahead a little, the Baileys flavor seems to come forward a little bit more. The big bonus, though, is because knocking these out ahead makes them a great party recipe.

I adapted this recipe from King Arthur Flour’s Chocolate Cream Cheese Brownies so you know they’re stellar! They are very different to make. For the brownie layer, the butter and sugar are heated and then the cocoa, salt, baking powder, and whiskey are added. That’s just a tablespoon of whiskey in the brownies; it’s no stronger than a tablespoon of vanilla. Only after that mixture cools just a bit are the eggs added, then the flour and then chocolate chips folded in.

I’ve always noticed with recipes that when cocoa is added to (or visa versa) a wam ingredient, it really intensifies the cocoa flavor, like in my fave Hershey’s Ultimate Brownies or any recipe where the cocoa is added into a cake with warm coffee! Don’t wait around once your butter/sugar mixture is done; get that cocoa in asap!

Make sure to divide the recipe in half in the prepared, parchment-lined pan. That parchment is important in this recipe; you need to get them out of the pan to cut or you’ll have a mess!

The cream cheese layer is a no brainer; beat the cream cheese, add in the sugar and flour and mix, then the whiskey, then the eggs, on low, one at a time. Never overmix once the eggs are in; it makes any cream cheese prone to sink and/or crack.

After the cream cheese layer is added, you’ll dollop the remaining batter on. I think it’s nice when the dollops are of different sizes, some large, some small and others just little bits, but make sure you leave a good amount of the white cream cheese w/o any chocolate for contrast. Swirl it, but don’t dig down into the bottom layer so you’ll have a good base.

First of all, have you SEEN the price of Bailey’s Irish Cream, lately? Or even the knock offs? As far as bang for the buck, the whiskey is going to give you a lot more mileage. And then you won’t have to sacrifice any Bailey’s!

Really Bailey’s Cream Cheese Brownies are sturdy, rich and very chocolaty, and as a consequence, aren’t “cheap” to make. Shop well for your ingredients.

Cream Cheese & Cream are on sale during holiday weeks and keep for weeks in the fridge, so always buy on sale. Items like cocoa and chocolate chips are another great holiday buy. I picked up a huge bag of Nestle’s Chips at Costco the other day at a fantastic price, but am not a great fan of either the Aldi or Costco chocolate chips. I love most of their other stuff, though!

Preheat the oven to 350°F. Lightly grease a 9″ x 13″ pan, line with foil or parchment, leaving an overhang (to make it easier to remove brownies) and grease again.

To make the brownie batter:

In a large saucepan, melt the butter, then stir in the sugar, cooking for several minutes until the mixture comes together and has a bit of a shine. Remove from the heat and stir in the cocoa, salt, baking powder, and whiskey. Allow to cool slightly, around 5 minutes. Mix eggs together in a small bowl, then whisk in the eggs, then the flour, stirring until smooth. Fold the chocolate chips into the brownie batter. Set aside. The batter will be divided in half.

To make the cream cheese batter:

Beat the cream cheese until no lumps remain. Mix in the sugar and flour. Gradually, on low speed, add the whiskey, beating just until the mixture is smooth, then the eggs, one at a time, beating and scraping after each addition.

Bake the brownies for 35 to 45 minutes, until a tester inserted into the center comes out clean, and the edges of the cream cheese mixture are set, and just very slightly starting to pick up color. The center will be a little “jiggly.”

Remove them from the oven, and loosen the edges with a table knife. Cool to room temperature, then refrigerate. Cool completely before cutting.

This is a great make-ahead recipe. Bring out of the fridge about an hour before serving. The Bailey’s flavor intensifies a little after a day.

I’ll be bringing Really Bailey’s Cream Cheese Brownies to Fiesta Friday #215, hosted this week by  Laurena @ Life Diet Health and Alex @ Turks Who Eat. We’d all love it if you stop by & see a collection of recipes and posts by the fantastic food bloggers who’ve joined in.