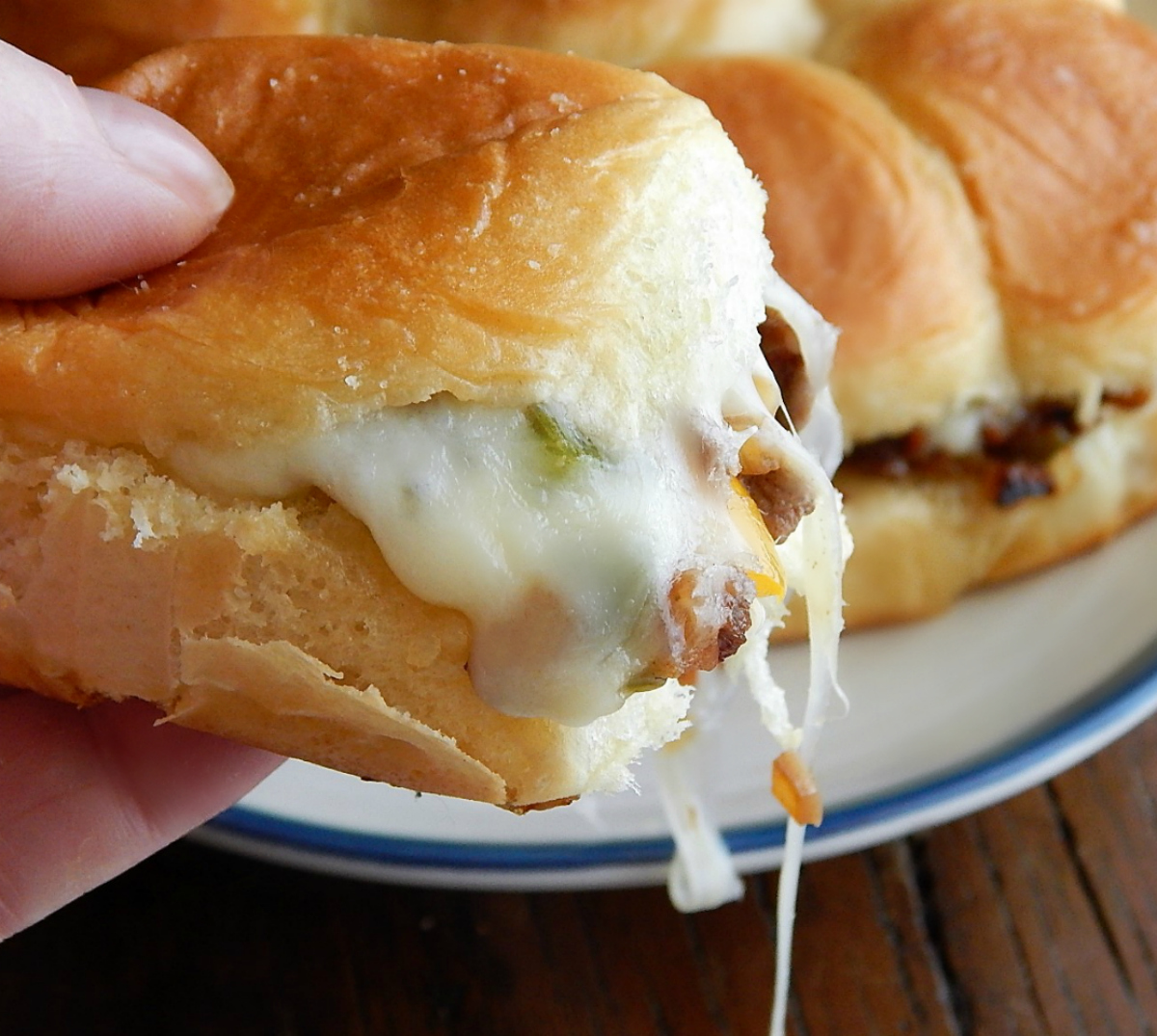 In the Twin Cities, we’re getting all psyched about hosting the Superbowl this year and in honor of that, I’ve come up with these fun Philly Cheesesteak Sliders to represent the Philadelphia Eagles. And just to be a good host, I have a little something for New England Patriots, too. Check out my New England Clam Chowder.

Hosting a Super Bowl is a pretty big deal for a city. You might say it’s a Super Big deal! We have a nifty new (ish) Stadium.  There’s a new layout in our Meet Minneapolis guide. Every day there’s a new article and new happenings. It’s all pretty exciting.

But what are we Minnesotans going to eat? (Unless you’re at the BIG party and Andrew Zimmern is cooking or you’re a diehard foodie.) We’ll be eating something do-able. We’ll have wings and lots of them, dips and chips galore. Some kind of Meatballs, and if you’re an old school Minnesotan, it might be Swedish meatballs, but they will almost always be in a slow cooker. We might have Wild Rice Soup. And for sure, all the usual suspects, Pizza, Chili and/or Tacos. And bars. Lots of bars (they’re really a Minnesota thing) for dessert.

And at my house, Philly Cheesesteak Sliders. Get one of these little sliders in your hand, the cheese melding the peppers, beef, and buns together & you’ll go nuts. Your guests will go nuts. The filling in these sliders is fabulous. The thick layer of melty cheese is just perfect. And the drizzly stuff on top adds so much flavor. Honestly, though, I think the magic happens with the Hawaiian Rolls. They’re super soft, sweet & salty and just the perfect foil for any kind of slider.

Speaking of which, sliders are kind of ubiquitous for game day. They’re fun, you can pick them up, they’re easy and you can make a bunch. Heck, if you’re having a big party, make trays ahead, assembly-line style and just pop them in the oven for 15 minutes as needed.

The beef can be the packaged frozen kind, the actual cheesesteak beef, thinly sliced beef or deli roast beef. If it’s the cheesesteak or thinly sliced steak, it has to be cooked and it’s an extra step, but as far as flavor, either of those options gets my vote.

Then you just need bell peppers and onion, diced so the sandwiches are easy to eat. There are a few little secret ingredients, subtle, so the Cheesesteak flavor shines out. Don’t question that mayo – trust me on this it’s what helps the sliders hold together and gives a barrier between the beef and the bun so the bun doesn’t get soggy. As far as the cheese, it cheese can be sliced, shredded or hand-cut. For the best sliders, I cut my own so I can get a good thick cheesy layer. You do you, though and what works for you.

As is I think these are fabulous; they can be made ahead and so much easier and much less expensive than serving full-on Philly Steak Sandwiches. When making these, I figure two sliders per person and assume at a game party there will be lots of other snack options. If you’re serving heavy eaters, you might want to allow for more per person.

Hawaiian Rolls can be pricey but are usually on sale around the Super Bowl & you can sign up on King’s Hawaiian site for coupons. Other options are slider buns (check the bread aisle and the bakery) which can be a little pricey, too, or for a budget option, little potato dinner rolls from the bakery.

That frozen cheesesteak is usually Ribeye and usually expensive, although it might be on sale around the Super Bowl, too. A cheaper alternative is to pick up a sales priced steak, maybe a sirloin, and have the butcher cut it, or cut it yourself, against the grain in wafer-thin slices. Freeze your beef or about 20 minutes and sharpen your knife.

It helps if you have a kitchen slicer and if you’re on a budget and find yourself making a lot of your own items, it might be well worth having one. If you use deli meat, shop around. All kinds of lunch and deli meats will be on sale around the Super Bowl, too.

Cheese is an item I really look for on sale or at Aldi and is usually a stock up item for me around the Super Bowl, often at a low. If the cheese isn’t opened, it keeps for weeks in the fridge Keep your block of cheese clean, don’t use the counter to cut it on (counters can be so dirty) and use a clean knife. Immediately slip any remaining the cheese right back into a Ziploc if there’s leftover and it will keep much longer.

In a large skillet, add the oil, heat to medium high and add bell peppers and onions, and cook until almost soft. Add salt and pepper, then push them to the side. Be generous with the salt.

Salt and pepper the steak, generously. Add the steak in two batches to the skillet, pushing and cutting at it with a spatula until it’s broken down and just cooked through. Toss the first batch up on top of the veggies and add the second batch to the skillet. Set aside, off heat, when finished. If desired (and recommended) add a few dashes of Worcestershire sauce to the steak as it cooks.

Remove rolls from packaging, but don’t separate into individual rolls. Using a long, serrated knife, slice through them all at once, horizontally, about halfway through. Remove the top layer.

Spread the bottom layer with mayonnaise, then add the rolls to the casserole dish. Mix together the pepper, onion and steak mixture and distribute over the mayonnaise, as evenly as possible. Top with cheese. Add the top layer of the rolls.

In a microwave-safe cup, melt the butter (about 1 minute) then add garlic powder and a couple of dashes of Worcestershire. Brush the mixture over the rolls. Sprinkle with sea salt.Cover with foil and bake for 10 minutes. Uncover and bake another 5 to 10 minutes, until the tops appear a little dryer and the cheese inside is melted. Serve immediately, out of the dish or place on a platter and separate, if desired.

I’ll be taking this recipe to Fiesta Friday #207, hosted this week by Lily @ Little Sweet Baker and Judi @ cookingwithauntjuju.com.