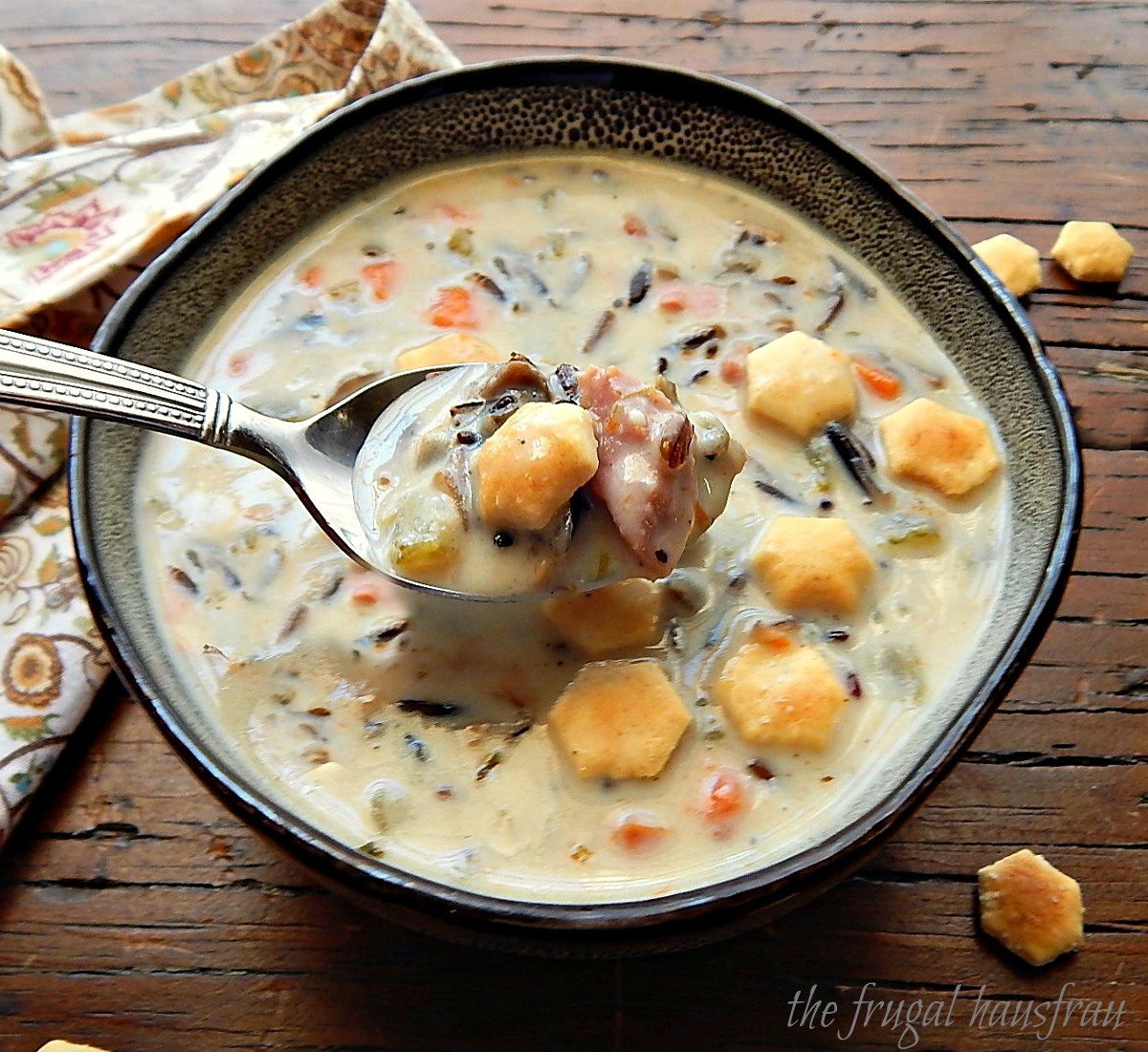 So hey, here I am a Minnesota blogger and I have no Wild Rice Soup on my blog. Uff da. Well, I do have a Wild Rice and Smoked Turkey Chowder (amazingly good and healthy!) but it’s just not the same as a Classic Wild Rice Soup in the Instant Pot, now is it? (As a quick aside, I will be posting recipes that aren’t Instant Pot and aren’t soup, it’s just been a crazy Holiday week, so if you don’t have an “IP” please bear with me!)

So here it is, a creamy Classic Wild Rice Soup in the Instant Pot with Wild Rice, ham (some people use chicken or turkey, so feel free to sub – and this recipe is ideal for any leftover Holiday turkey or ham), mushrooms for deep umami flavor & classic veggies as a supporting cast: onions, carrots & celery. Oh, and a touch of Sherry if you’re so inclined.

But we can forget about any “Cream of” Soups. Nope, there’s not a can in sight for this soup – unless it’s canned or boxed broth. 🙂 Instead, a roux (butter & flour cooked together) brings a gorgeous texture and silkiness to the soup.

I had a dilemma about that roux in Classic Wild Rice Soup in the Instant Pot: generally, you don’t want to cook roux based items in any pressure cooker; thickening agents go in at the end. So I opted to make the roux in the pan & whisk it into the soup at the end, even if it means dirtying another pan.

I like to use my own crazy special blend of Rotisserie Chicken Spice Rub in my soup; I love the flavor in there. Seriously. It’s like an amped up seasoning salt. There’s a version made by McCormick if you don’t want to mix up your own. Or you could riff and add a little seasoning salt or anything else you want. Hey, it’s your soup!

There’s only one rule for Classic Wild Rice Soup in the Instant Pot: you gotta use real wild rice, not a blend. While wild rice can be pricey, it’s a healthy grain, and swells to about 3 1/2 times the original volume. I know, right! It’s like me after too many carbs! Take a peek around the bags & boxes at the store. There may be packages of less than perfect rice at a lower price. Like wild rice “seconds.” It won’t matter in a soup.

So here it is, the real deal Classic Wild Rice Soup in the Instant Pot, with all the flavor and comfort you can imagine, from up “Nord” to your home, where ever you are. And done in the fraction of the time of a stove-top or slow cooker version. Hope you love it as much as we do!

An absolute classic Wild Rice Soup from up “Nord” to your home.

Turn on instant pot to Saute, high heat. While it preheats, toss in butter and diced mushrooms & cook until starting to brown. Add the rest of the ingredients, except ham, and stir. Sprinkle ham on top, close and seal instant pot and set to High Pressure for 30 minutes. Use the Quick Release Method.

In the meantime, in the last 10 minutes or so of the cooking time, make the roux.

In a medium-sized, preferably heavy saucepan, melt the butter over medium heat and whisk in the flour. Cook, whisking often for two to three minutes until the mixture begins to look slightly drier.

Turn down the heat slightly and add the milk in several additions, whisking constantly until all is incorporated and smoothed out. Turn up the heat and bring to a simmer, two to three minutes, until thickened.

Note: this is a heavy, thick roux, almost the texture of a wallpaper paste. Work carefully in adding the milk so lumps don’t form.

When steam has released from the Instant Pot and lid is opened, hit cancel, then Saute, high heat. As soon as the soup begins to boil, whisk the roux in a little at a time. This is best done by picking up a portion of the roux in the whisk and whisking vigorously until the whisk has no more roux on it, then repeating.

When finished, turn off Instant Pot and remove the soup in the liner so it doesn’t continue to cook. As the soup cools slightly, it will thicken a bit more. Taste and adjust seasonings.

I’ll be taking this recipe to Fiesta Friday number 204, hosted this week by Sandhya @ Indfused.com. If you’ve never stopped by Sandhya’s blog, full of Indian and Indian American fusion, do so! You’re in for a treat. And be sure to stop by Fiesta Friday and see all the New Year’s posts! Party food galore. Happy New Year’s, ya’all!

Put your own Spin on It:

Over the years, I’ve come up with my favorite ways to flavor this soup, but feel free to alter in any way. If you don’t care for mushrooms, leave them out. If roux isn’t your favorite way to thicken this soup, try peeling two large potatoes, but leaving them whole (use large so they don’t cook so much they disintegrate) on the top. Remove and mash with the 1/2 & 1/2 (you may need less) then return to the soup.

If you came to this recipe looking for a way to use leftover ham, be sure to check out the link below for 12 Days of Ham. You might want to see the sister post for 12 Days of Turkey, too.

38 thoughts on “Classic Wild Rice Soup in the Instant Pot”