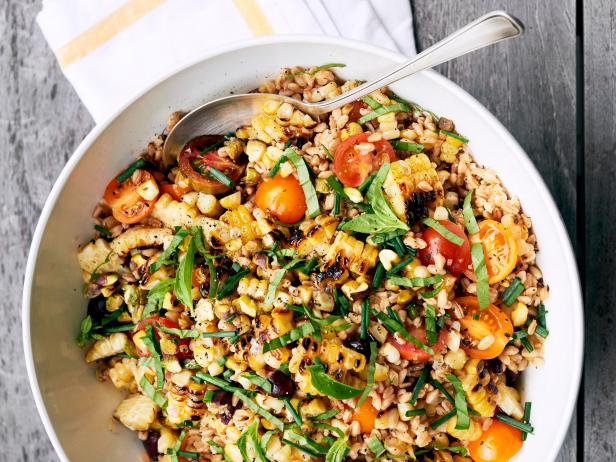 Do you ever mess up a recipe and then decide that you liked it so much you couldn’t have it any other way? Well, that’s what happened to this Warm Farro Salad with Charred Corn from the July/August Food Network Magazine. It turned out to be a happy mistake.

So I’m going to tell you how I made the Warm Farro Salad coz I will make it every time this way. I made a few other changes, too: I typically down play the grains and up the veggies in a salad like this. What I got was a bright and fresh salad full of all the goodies: charred corn, cherry tomatoes, & Kalamata olives.

The biggest surprise was how the lemon really stood out in this salad, which I loved; maybe that’s because I cut back a little on the basil. I don’t know if it’s because I grow my own herbs and they’re fresher than what you buy at the grocer’s but sometimes the amount in recipes really just bowls me over.

Anyway, when you buy Farro, check and see if you can’t get it from the bulk area of the store or a health food store rather than paying a ton of money for those little packets you find near the rice. You’re likely to find corn (see how to pick a good ear) and tomatoes on special all summer long; just make sure to use that corn asap when you get it home.

The red cherry tomatoes are usually less than the “heirloom” mixed but Aldi is a great place to pick up either on the cheap. (I think they even have farro there, now.) Even less, although not as pretty, is a regular sized tomato. Chunk and strain it for a few minutes.

I love cutting my corn over a bundt or angel food pan – it makes the job so much easier! Thanks to Real Simple for the photograph.

In a jar with a lid, shake together the olive oil, lemon zest and juice, apple cider vinegar and mustard; season to taste with salt and pepper and set aside. (You’ll use about 3/4’s of the vinaigrette to mix in with the farro and reserve about a 1/4 to remoisten or bump up the flavor of the salad before serving.)

Preheat a grill to high, then start cooking the farro on the stove-top. While the farro cooks, you’ll grill the corn.

In a medium-sized saucepan with a tight lid, add two cups water to the cup of farro, along with the tablespoon of olive oil and 1/2 teaspoon salt. Bring to a simmer over medium-high heat, turn to a low simmer and cook, covered, until al dente, about 20 to 22 minutes. Remove from heat and set aside for five minutes. Drain if necessary. (Keep an eye on it while cooking; it can boil over or absorb more water than expected and scorch.)

While the farro is cooking, brush the corn with a tablespoon of oil. Season with salt and pepper. Cook on the hot grill, turning with tongs, until slightly charred, 8 to 10 minutes. Cut off the kernels.

Add the corn kernels, tomatoes, olives, red onion and chives to the farro. Gently toss to combine; add more vinaigrette if desired and season with a good amount of salt and pepper. Garnish with the basil.

I’ll be taking this recipe to Angie’s Fiesta Friday , hosted this week by Liz @ spades, spatulas & spoons and Jenny @ Jenny Is Baking. If you have a minute, click over to Fiesta Friday & see all the link ups, or Liz & Jenny’s blogs.