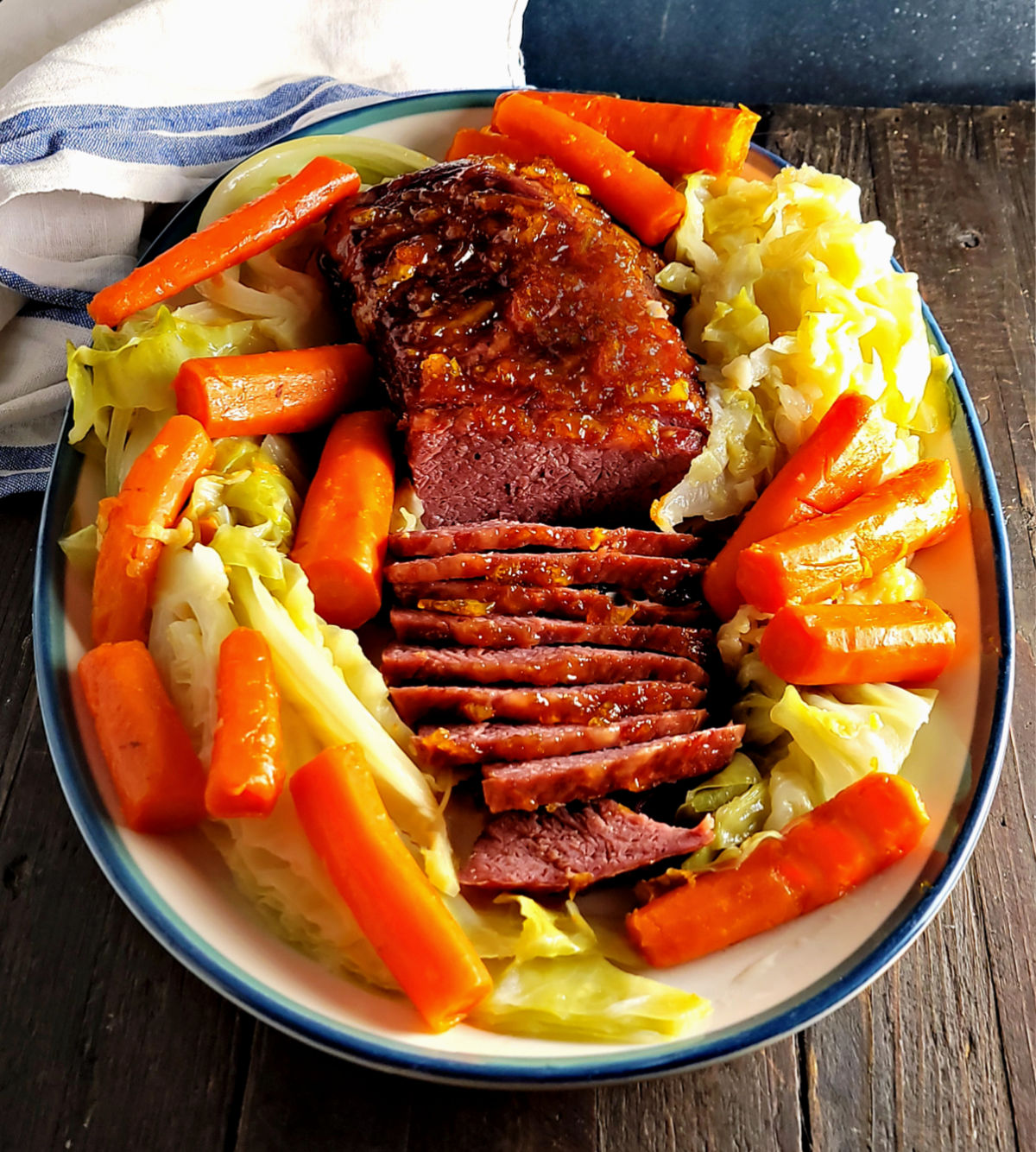 I make the same Corned Beef & Cabbage every year. Year after year. It’s that good. (And every year I make the braised stovetop version of it, not the slow cooker version, although slow cooker instructions are on the same recipe. This year, though, I wanted a change-up. Something more sophisticated. And here it is, Whiskey & Marmalade Glazed Corned Beef inspired by the Silver Palate Book.

See, I’ve been helping the folks out for a while now and my StepMom Pat kinda turned up her nose at the idea of Corned Beef. She’s of the age where she went through the depression as a child and isn’t a real fan of recipes that are what I’d call old fashioned “plain cooking” like corned beef and cabbage. I knew some “enticing” was in order.

I don’t think Pat’s alone. I think there’s a lot of people these days wanting to up their game on the old Corned Beef. Even this Grandma wants to be trendy now and then, and if there is a trendy corned beef, this recipe has GOT to be it.

It’s a very, very loose adaptation of the old Silver Palate Glazed Corned Beef with a newer cooking method and a few extra special added touches of my own. Yep. Whiskey. And don’t skimp on the bright, tanginess of the powdered mustard or a wee drop or two of the hot sauce in that glaze. Those are what transforms the glaze from sticky sweet to a complex mix of flavors that are going to tantalize you and leaving you wondering, “Just what IS this deliciousness?”

I feel like I’m a day late (or two days to be exact) and a dollar short, as they say, on this recipe, posting right AFTER St. Paddy’s day. Pin it for next year or pick up some very sales priced corned beef at the store and make it now or in the next few weeks. 🙂 Corned Beef keeps for weeks in the fridge and can be frozen, too.

As far as the method, the corned beef is not overcooked, beautifully sliceable, flavorful and juices are absolutely amazing! In this recipe, no liquid is added and this corned beef is concentrated flavor. I gotta admit I was dismayed when I pulled this corned beef out of the oven and thought it looked a little homely, but I was converted at the first bite I snitched while taking pictures.

There are four stages of cooking.

When corned beef is resting, take those juices, concentrated with flavor, and simmer the carrots and cabbage in them. Basically, the carrots simmer, the cabbage steams on top. Watch the liquid level and add a little water if needed. They’re amazing; the carrots will be soft but keep their integrity and the cabbage will be fresh and gorgeous.

Serve the corned beef with a rustic red potato mash.

As far as cost, Corned Beef isn’t always the cheapest of meats, even when on sale for St. Patrick’s day, but watch closely and you’re likely to find some decent pricing with competitive sales. Depending on how the stores in your area handle the excess after the holiday, you may be able to pick a couple up for dirt cheap. Corned Beef will keep for weeks in the fridge and freezes well, so I always pick up extra if it’s at a great price.

Luckily, all the rest of the Corned Beef Cabbage Dinner IS dirt cheap and usually on sale. Compare pricing if you come across those bags of veggies, though. Sometimes the bagged “specials” might be more (or at least more per pound) than buying potatoes, carrots, and cabbage on their own. And while you’re at it, pick up extra of any of the vegetables while they’re on sale especially the cabbage if you have room. Then make my Cabbage Rolls or Cabbage Roll Soup, both perfect for cold spring days!

These days, corned beef seems to come in smaller packages, but If you can set a little corned beef aside to come back to the table another night, you’re able to “cost average” that brisket over two meals or more. While the Corned Beef will be the star of the show the first night while it will take on a secondary role the second. Think Classic Reubens, of course, or my Connemara Soup, Irish Pub Nachos or check out my Irish & Irish American Collection for cost-effective ways to stretch a little leftover Corned Beef.

This fun sweet, sticky, smoky glazed corned beef dinner might just be the best change-up you can make to your St. Paddy’s day dinner.

Preheat oven to 300 degrees. Line a pan a little larger than your corned beef with foil, leaving the foil hanging over the edges and using enough foil so it can be folded over the corned beef and sealed.

While the corned beef is cooking prepare the glaze. In a very small saucepan, whisk together the marmalade, vinegar, whiskey, mustard powder, soy, salt & pepper and hot sauce. Bring to a good simmer and cook, stirring now and then, until the marmalade has turned in to a thick sauce. When it cools, it might harden a bit.

Remove the corned beef from the oven and open, then arrange the foil so you can easily pour the juices into a large saucepan or Dutch oven then carefully do so. Turn the oven up to 425 degrees.

Add the carrots to the bottom of the pan that’s holding the juices from the corned beef. Arrange cabbage wedges over the top. Bring to a simmer, add a lid and simmer until the carrots are tender and cabbage is cooked through, about 20 – 22 minutes. Check the liquid level and add a little water if needed.

Serve the corned beef with the carrots and cabbage.

Note on cooking time: An hour per pound is a rule of thumb but if your corned beef is a thicker cut like this one was, it may take longer to become tender.

Note on cooking time: An hour per pound is a rule of thumb but if your corned beef is a thicker cut like this one was, it may take longer to become tender.

I’ll be bringing this recipe to Angie’s Fiesta Friday!