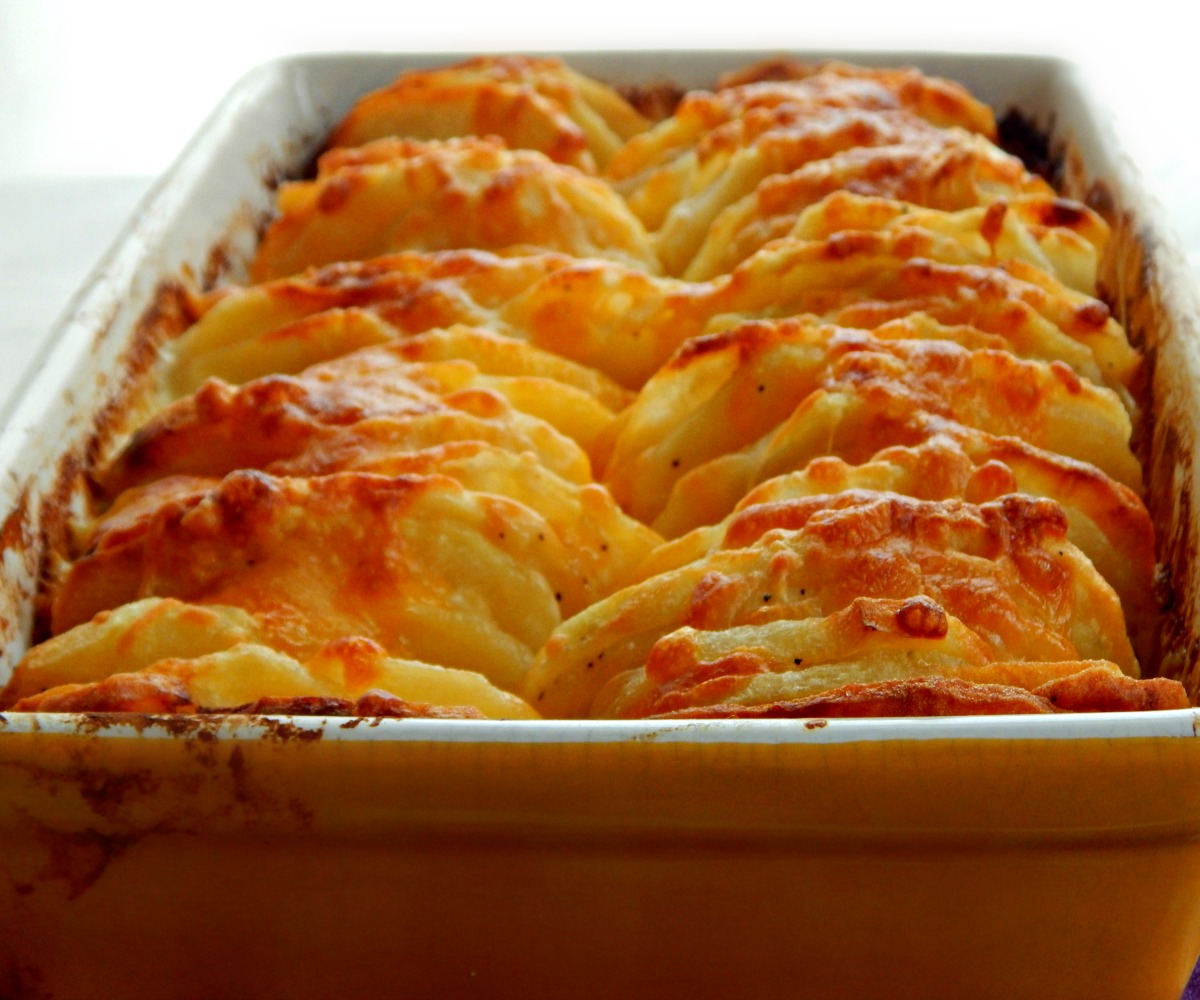 I have a little secret. I’ve been holding out on you. See, I’ve been making these Hasselback au Gratin Potatoes for months now and never posted them. They’re amazing, they’re gorgeous and they’re amazing. Oh, I said that already. Well, I can’t say it enough. As a matter of fact, every time I come across this post and see these pics, bad as they are, my mouth starts to water! These are a must make in my book.

So to go on the site, here, I need a photo and every time I’ve made these we’ve just gobbled them all up before I could even get a picture. They’re that good. Even these photos were rushed as I ran off with the potatoes for their photo to cries of, “Hey, where are you going with that?!!” from the folks who were gathering at the dinner table!

Hasselback au Gratin potatoes are make little noises when you eat good. They’re take a second and third helping even if you’re already stuffed good. And they’re sitting around the table talking as you finish dinner and picking little crunchy bits from the nearly empty casserole even as you say, “I have to stop!” good.

They’re “Hasselback” because the potatoes are stacked sideways & sticking out of the pan; the ridges are supposedly reminiscent of the ridges on the back of Hasselback Hog. What baking these potatoes vertically does for you is it gives you a casserole of au gratin potatoes with a maximized cheesy top part while the bottom of the potatoes in the casserole are infused in a creamy, dreamy garlicky deliciousness. Best of both worlds!

This recipe is different than most of the recipes out there because it does have a crunchy, cheesy top that gives way to an ooey-gooey cheesy layer before you get down to the bottom portion of the potatoes with that lovely creamy garlicky deliciousness. They are just insanely good and they came about by accident!

See, I had made a recipe from Serious Eats, but honestly we were slightly overwhelmed by it. We thought it was a bit “Meh.” That’s when I decided to remake it but boost up the flavor a bit; use garlic powder instead of minced garlic and more salt to totally infuse the cream with flavor, Then I ran out of time & in a panic put the casserole of potatoes the microwave to give them a head start and then put them into the oven.

That time in the microwave not only knocked a half an hour off the cooking, but it was also a bit of accidental alchemy that seriously took this dish over the top. What I really did in that microwave was twice cook or par-cook the top layer of potatoes, and that’s basically the same technique that’s used to make french fries crispy and the same method that I use when I make my Bomb Baked Potato Wedges. I put a photo of them, below.

Now you can just cook the Hasselback au Gratin Potatoes for an hour and a half like the original recipe states, but I highly recommend going for 30 minutes in the microwave and thirty minutes in the oven. That’s less time and twice as good! Directions for both baking methods are in the recipe. below.

Choosing the Casserole Dish & the Potatoes:

Gone are the days when everyone only had two sized casseroles, an 8×8, and a 9×13. This recipe is sized for a 2-quart casserole, so that’s about 8×11 if it’s rectangular like mine. And that’s perfect because it will fit in most microwaves.

Normally, I’m not super picky about the size of the potatoes in most dishes, but I just happened to have potatoes that were much larger than my “normal” cheap bag that often has mixed sizes in it. These were more on the line of the bakers you see sold loose at the store. That worked out beautifully because the potatoes are large enough when stacked sideways that they stick out of the pan just a little and maximize that golden brown and deliciousness.

The size of the potatoes and the size and shape of the dish can be variables. It’s a good idea to have an extra potato or two and maybe even a little extra cream until you see how things “stack up.” (I couldn’t help myself. ) I eyeball things by laying the potatoes out next to the casserole so I can kind of get an idea of how many to slice. Do use a mandolin if you have one; you’re looking for slices about 1/4 of an inch thick. I cut mine by hand, but sharpen your knife first it makes a big difference.

Of course, you want to watch for sales on potatoes if possible and the bakers at my store do go on sale pretty often throughout the fall and winter expecially. They are a little spendier than the russets in the 10 pound or even five-pound bags but it makes such a difference in this recipe that I don’t mind paying a bit extra. Of course if you do have a bag of potatoes, give them a sort and pull out the largest for this recipe.

It’s the cream and the cheese that are the pricey items here. I always pick up grocery store cheese when it’s on special; it keeps forever unwrapped and can be chucked in the freezer. Do make sure to use a good sharp, dry Cheddar for this recipe, though if possible. That’s going to maximize the crunchy crispy top crust o these potatoes.

For the cream, watch for sales during holiday weeks and buy it to have it on hand if you use it. With the high-fat content, it literally keeps for weeks. If you have an Aldi nearby, their normal everyday price rivals the best grocery store sales price and your buyer’s club has decent prices, although you’ll have to buy it by the quart.

These Hasselback au Gratin Potatoes are stellar! From the crispy cheesy top to the creamy garlicky deliciousness underneath. People will RAVE!

Note: although garlic is oftten a preferred ingredient in the case of these potatoes, the garlic powder infuses all the cream with flavor.

Adjust oven rack to middle and preheat to 400 degrees F. Grease a 2-quart casserole dish (I use an 11 x 7″) with butter or spray.

Add half the Parmesan and/or Asiago or mix of both to a large bowl. Mix in cream, minced garlic or garlic powder & salt and pepper. Add potato slices and toss to coat, separating slices so each potato is covered. Working by the handful, pick up potatoes, trying to keep a little cheese between the slices and pat into a fairly even horizontal stack. You’re looking to keep the side edges of the potato pretty even but have a lot of variation in the stack on the top edge, so turn some around as needed..

Working in rows along the outside edges, place in casserole with the top edges up and aligned vertically. Continue placing potatoes in casserole, working around the perimeter and into the center until all potatoes have been added and potatoes are pretty tightly packed. You’ll want them tight enough so that you can’t get a finger width in, but not so tight that there’s not room for the cream to seep through. If necessary, slice additional potato, coat with cream mixture, and add to casserole. Pour excess cream/cheese mixture evenly over potatoes until the mixture comes half to 2/3rds of the way up the sides of the casserole. You may not use all the cream or you may need to add a bit more. Mix the reserved Parmesan/Asiago with the cheddar cheese and set aside.

Choose method of baking but do place a large sheet of foil on the oven rack under the baking dish to catch any potential spill over:

Cover tightly with foil and transfer to oven. Bake for 30 minutes. Remove foil and continue baking until top is pale golden brown, about 30 minutes longer. Carefully remove from oven, sprinkle with reserved cheese, and return to oven. Bake until the potatoes test done with tested with a knife (it should slide in easily with little resistance) and the top is deep golden brown and crisp, about 30 minutes longer. Remove from oven, let rest for a few minutes, and serve.

Cover with a layer of plastic wrap and microwave on high for 30 minutes. Make sure to preheat oven at appropriate time so it’s at 400 degrees F. when the microwave time is over. Remove from microwave, sprinkle with cheese and bake for 30 minutes until the potatoes test done with a knife (it should slide in easily with little resistance) and the potatoes are crisp & cheese is melted and the cheese is deep golden brown. Remove from oven, let rest for a few minutes, and serve.

Note: there is always going to be a bit of variable in this dish – depending on the shape of the dish & the size of the potatoes you may need more or less to fill the dish. That can affect just how much cream you’ll need, too. I try to eyeball the potatoes next to the dish to estimate how many I’ll need but be prepared & have an extra potato on hand if you need to fill in.

Although this recipe should serve six to eight, these were so good four of us polished this off. Judge accordingly.

I’ll be bringing this recipe to Angie’s Fiesta Friday!