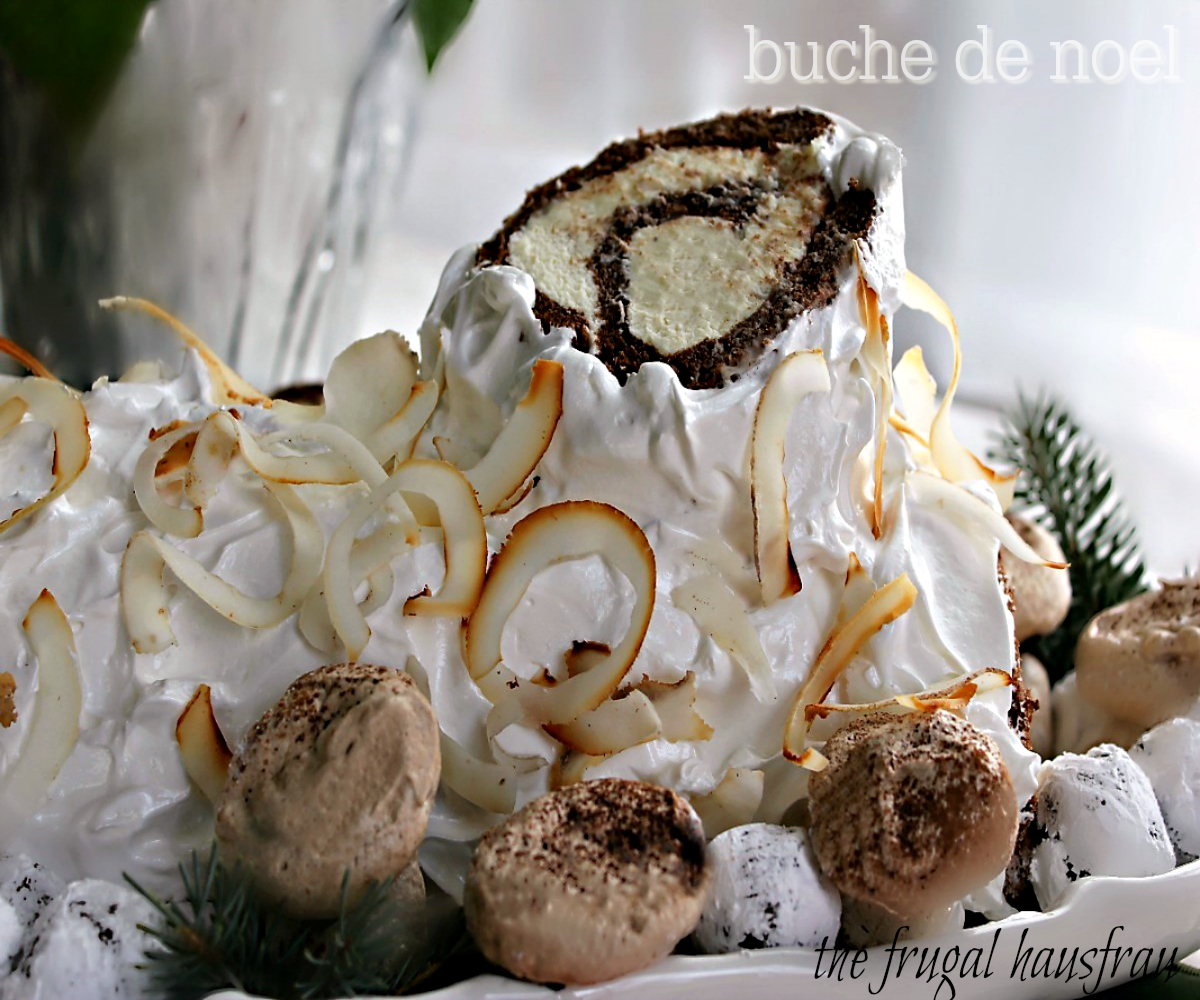 I try to make this cake. Buche de Noel Yule Log, from Martha Stewart’s 2003 Christmas Book, every Christmas Season. She calls it Birch de Noel, and I always thought it was fitting because up “Nord” here in Minnesota, all the logs are blanketed in snow through the winter season. You betcha! I guess it appeals to the realist in me, though this dessert is pure fantasy!

It’s a fantasy of chocolate on chocolate, a white chocolate mousse wrapped with a deep chocolate cake, all all topped by sparkling billows of snowy white Seven Minute Frosting…and who can resist the rustic chocolate truffles or the darling little meringue mushrooms sprinkles about? There are a few coconut shavings drifting over the cake, just to mimic I don’t know what – maybe the papery bark of a birch? I usually add them because they just add a little something to the looks. They can easily be skipped if you wish. I wish my photos did this beauty justice.

I can’t really express in words how much I love this cake; it’s not just about the looks. Each component is absolutely divine on its own and together make a showpiece. And while I often make this at Christmas, I wouldn’t hesitate (and have) served it at an earlier Holiday party and once at a New Year’s eve party.

But once you make it, be prepared; this is a hero cake! You may be asked for it every year and chances are no one will want the recipe. They’ll just assume it’s much more difficult than it is to make. You can truthfully answer, thanks, it’s was no problem” as the compliments roll in.

In actuality, as long as you break this cake down into components, it IS fairly simple. Or maybe I should say each component is simple. Most of the components have to be made ahead (except for the frosting) so they’ll set up so this is a dessert you can literally start a week or two ahead by making the coconut, the truffles, and the meringue mushrooms.

When the cake is baked, it’s cooled and filled with the cooled White Chocolate Mousse, then rolled and needs at least two hours of chill time before it’s frosted. So that Mousse has to be made ahead so it’s cooled, too. So I find it easiest to prepare the mousse, chill it, prepare the cake and fill it the day before it’s needed. Then the only thing that has to be done day of is the frosting and the decorating.

So here’s your game plan counting down from when the cake is served:

So as you can see, a little planning can make this a fun cake to make! There are plenty of truffles and mushrooms so you can decorate the cake as you wish and satisfy the little ones by giving them a few extra and a bit of frosting and let them make their own creations or just go hog wild and let them have at it.

The cake is surprisingly easy to roll and the part that always stresses me out the most! If you don’t have a rack large enough to turn the cake out on (you’ll turn it out onto the rack then remove the parchment paper you baked it with) just use the back of a large sheet pan. Don’t turn it out on your counter because when you’re ready to roll it, you’ll lay the towel over the cake and then turn it over onto the towel.

Just make sure you have a large, clean smooth towel at the ready. That’s the hardest thing at my house! You might want to hide it away rather than leave it on the counter if you don’t want to risk someone grabbing and using it.

You’ll roll the cake up in the towel, then unroll it, fill it and roll it again. By using the towel first, you’re “training” the cake, basically. It really does come together well and a few little cracks here or there are always covered by frosting.

Really shop the holiday sales and keep in mind you’ll end up with a considerable amount of egg yolks, seven, so have a plan for them. Maybe a pudding, custard, ice cream or egg nog! You’ll have quite a bit of leftover coconut, too. I generally shave and toast it all and freeze for another use, later. Sometimes I make coconut shrimp for New Year’s Eve.

For the cake and components:

For the Meringue Mushrooms:

To prepare the coconut:

Heat oven to 350 degrees. Wrap coconut in a kitchen towel, and place in oven for 20 minutes. Remove from oven, and place on a work surface. Reduce oven to 250 degrees.

Tap coconut with a hammer until it cracks in several places; break it into pieces. The white flesh should be slightly pulling away from the hard shell. Separate it, keeping pieces of coconut as large as possible. Using a vegetable peeler, shave the largest pieces of coconut into long curls, and place on a baking sheet in oven.

Bake for 15 to 20 minutes, until just dry. This may be done a week or two ahead. Save enough coconut (you’ll need about 1/2 cup finely grated, the smaller pieces are fine to save) for the filling. They may be wrapped well and frozen if the coconut is being done ahead, but do not grate until you are ready to fill the cake, then grate them on the small holes of a box grater. You will have extra coconut.

Heat oven to 400 degrees. Line a 12-by-17-inch jellyroll pan with parchment paper, and set aside.

In the bowl of an electric mixer fitted with the whisk attachment, beat egg yolks on high speed until pale yellow, 4 to 5 minutes. (I use the same bowl and whisk.)

Using a rubber spatula, fold egg-yolk mixture into egg-white mixture. Sift cocoa powder and flour over top, and gently fold in. Pour batter into prepared pan, and smooth top with an offset spatula.

Bake until cake springs back when touched, 9 to 10 minutes. Remove pan from oven, and immediately turn the cake out onto a wire rack lined with parchment paper. Peel parchment paper from the top of the cake, and cool completely.

Dissolve gelatin in 1/4 cup cold water, and set aside for 5 minutes. Place chocolate in the bowl of a food processor, and pulse until very finely chopped.

Prepare an ice-water bath; set aside. Place 3/4 cup cream in a small saucepan, and bring just to a boil over medium-high heat. Add gelatin, and stir for 30 seconds to dissolve completely. Pour into food processor with the motor running, and process until chocolate mixture is smooth.

Transfer to a medium bowl and place over ice water bath. Chill until mixture is thick enough to fall from a spoon in ribbons.Whip remaining 1 3/4 cups heavy cream to soft peaks. Fold into chocolate mixture. If not using immediately, refrigerate in an airtight container.

To prepare the Seven Minute Frosting:

In a small heavy saucepan, combine 3/4 cup sugar, the water, and corn syrup; cook, stirring occasionally, over medium heat, until sugar dissolves. Raise heat, and bring to a boil, washing down sides of pan with a pastry brush dipped in water to prevent crystals from forming. Continue cooking without stirring until a candy thermometer registers 230 degrees, about 5 minutes.

Meanwhile, beat egg whites in the bowl of an electric mixer fitted with the whisk attachment on medium speed until soft peaks form, about 2 1/2 minutes. Gradually add remaining tablespoon sugar until combined.

Once sugar syrup has reached 230 degrees, immediately remove from heat; with mixer on medium-low, carefully pour mixture into egg-white mixture in a steady stream down the sides of the bowl to prevent splattering. Increase speed to medium-high, and beat until mixture is completely cool and stiff peaks form, about 7 minutes. Add vanilla, and beat until fully incorporated. Frosting should be shiny and smooth. Use immediately.

To assemble the cake:

With a long end of cake facing you, roll carefully into a roulade. Wrap in a kitchen towel, and secure with clothespins or large metal binder clips to hold the roll in a tight round shape. Place on a baking sheet, and refrigerate until firm, at least 2 hours.

Remove from refrigerator, and unwrap. Using a serrated knife, trim the ends of the roll, cutting on the bias. Choose the more presentable end, and place it, cut-side up, on the log, forming a branch. If desired, use the other cut end for a second branch.

Transfer the log to a serving platter. Slide 5-inch strips of parchment paper under the log to protect the tray while decorating. Coat with seven-minute frosting using an offset spatula. Remove parchment pieces. Decorate with meringue mushrooms, snowy chocolate truffles, and coconut shavings and greenery dusted in sugar if desired.

To Prepare the Meringue Mushrooms:

Heat oven to 200 degrees. Place Swiss Meringue (below) in an 18-inch pastry bag fitted with a large round tip (Wilton #1A). Line two baking sheets with parchment. Pipe meringue, forming domes 1 to 2 inches in diameter. Pipe a stem shape for each dome. Place baking sheets in oven for 1 hour, reduce heat to 175 degrees, and continue baking until meringues are completely dry to the touch but not browned, 45 to 60 minutes.

Place white chocolate in a heat-proof bowl, and set over simmering water. Turn off heat; stir occasionally until completely melted. Allow to cool slightly. Spread white chocolate over dark chocolate; use a toothpick to create lines from the center of the cap to the edges. Let set in a cool, dry place.

Poke a small hole in the center of each mushroom cap using a paring knife. Dip the pointed end of each of the mushroom stems in melted white chocolate, and insert into hole in center of cap. Allow to set. Meringue mushrooms should be kept in an airtight container in a cool, dry place.

Very lightly dust the tops of the meringue mushrooms, with a fine sieve, with a little cocoa powder.

To Prepare the Swiss Meringue for the Mushrooms:

Fill a medium saucepan one-quarter full with water. Set over medium heat, and bring water to a simmer.
Combine the egg whites, sugar, and cream of tartar in the bowl of an electric mixer, and place over saucepan. Whisk constantly until sugar is dissolved and whites are warm to the touch, about 3 minutes. Rub the mixture between your fingers to test.

Transfer bowl to mixer stand, and whip, starting on low speed and gradually increasing to high, until meringue is cool and stiff glossy peaks form, about 10 minutes. Add vanilla; mix until combined. Use immediately.

I’ll be taking this Buche de Noel by to the Fiesta Friday 100 anniversary extravaganza, and I’m also co-hosting this event, so a big shout out to Angie from the Novice Gardener and Fiesta Friday for putting the event on and Steffi from Ginger&Bread, Suzanne from APugintheKitchen and Judi from CookingwithAuntJuju for co-hosting, too. Stop by, say hi, visit and mingle and I hope to “see” you there!