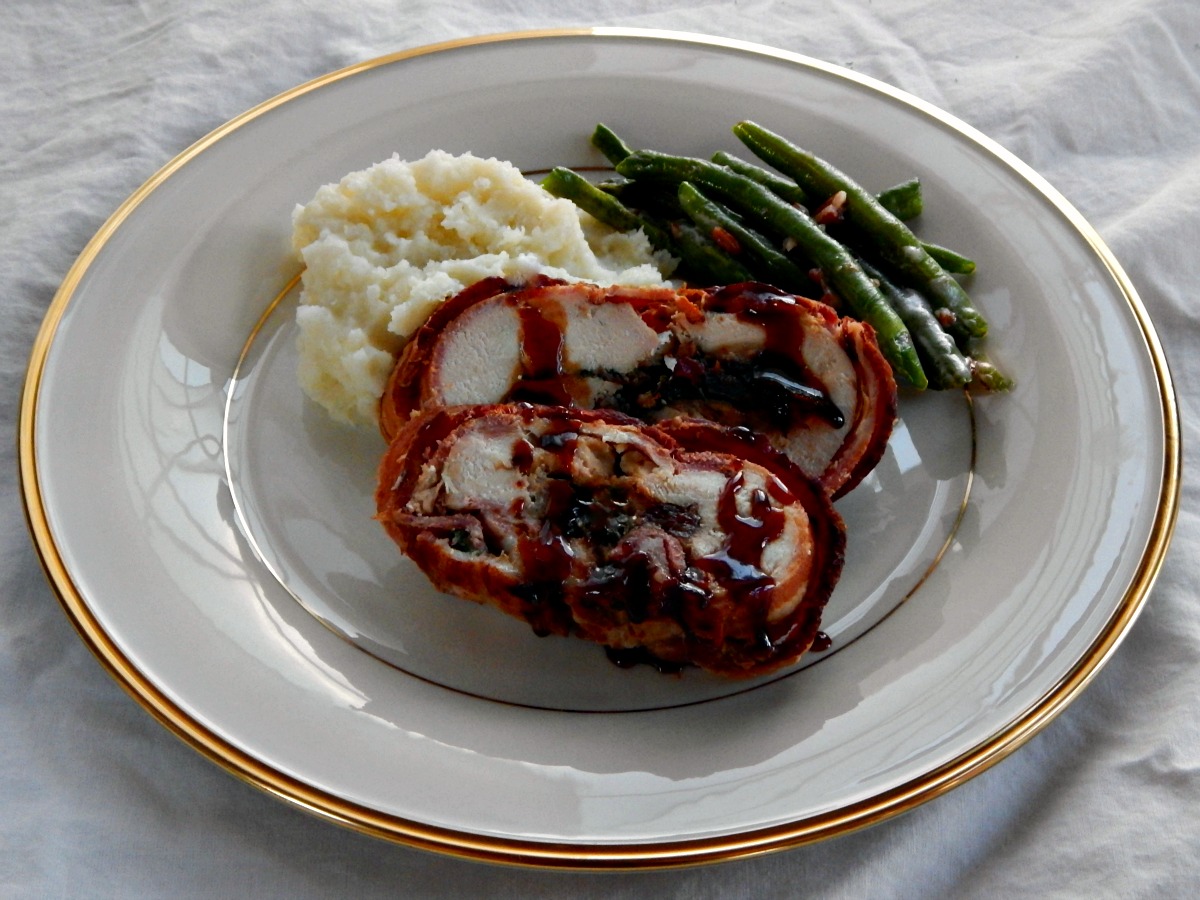 Are you like me? When you’re waiting at an office or for an appointment, do you read all the food magazines first? And if there aren’t any, do you read others from the back to front because the recipes are in the back? That’s exactly how I came across this recipe from Better Homes and Gardens* for Stuffed Chicken Roast. I practically drooled over it! I was obsessed – I knew I had to make it!

What! I could just imagine how good it was, and believe me, it lived up to that anticipation! It was very impressive, too, sliced up on the platter when we brought it to the table. (I wasn’t able to get a pic before it was served, so borrowed BHG’s.) This Stuffed Chicken Roast would be perfect for a winter/fall Holiday dinner or company.

I think the universe was conspiring to have me make this Stuffed Chicken Roast. The folks had an old bottle of port in their stash (many people do, it’s often bought and used once, then relegated to the back of the cupboard where it keeps forever) and chicken breast was on a big sale – Not only could I not pass up such a gorgeous entrée (those flavors – smoky bacon, dried cherries, port!) but this hit me as an amazing way to take everyday, inexpensive ingredients and transform them into something AH-MAZ-ING! I love that!

This elegant recipe was a bit fussy, but a lot of that was first time figuring out stuff – it was actually easier than I anticipated and I’ve added some notes and pics to help you out. And then of course, I’ve made a few small changes. There wasn’t enough sauce for one, and a few other things that didn’t really work well for me! Too much stuffing, too. I tried, I really did, to cram it all in and still had about a cup too much. It went into a breakfast scramble the next day, so I cut slightly back on the ingredients, below.

I’d encourage you not to wait for a Holiday to make this – pick up the phone, call a few friends and use this fantastic entrée as a reason for a party! 🙂 We served it with Harvest Wild Rice Salad, Mashed Potatoes and Green Beans with Pecans & Gorgonzola.

In a small saucepan combine the port, cherries or cranberries and sugar. Stir until boiling to dissolve sugar. Reduce heat and simmer, uncovered, for 10 minutes, until port is syrupy. Remove from heat and strain fruit, reserving both liquid and cherries. Cool completely (may be covered and chilled overnight). Add vinegar to liquid, to taste. Add salt & pepper to taste.

In a deep saucepan, cook sausage over medium heat until cooked through, stirring to break up pieces. If sausage is lean, add a tablespoon or so of water to facilitate cooking; it should evaporate by the time sausage is cooked through. Remove sausage from skillet with a slotted spoon, leaving drippings behind.

Add butter to same pan. Add onion; cook and stir until tender, about 5 minutes. Add spinach; cook, stirring until wilted, about 2 minutes. Remove to a colander set over a large bowl. Press out liquid with the back of a spoon; discard liquid.

In a medium bowl stir together the sausage, spinach mixture, drained cherries or cranberries, cheese, bread crumbs, and parsley. Set mixture aside.

Original instructions say to “pound chicken breasts between 2 pieces of plastic wrap to an even 1/2-inch thickness; set aside.” I used four “single” or 1/2 boneless breast halves. Rather than dealing with all the pounding, I cut each breast almost through, horizontally, from the center to the wing side (thin side) making a few intermediate cuts towards the middle so it will lie flat, then lightly pound, covered with a layer of plastic wrap, to an even thickness. See photos in gallery, below.

Lay out two pieces of plastic, each about 18″ long, vertically, side by side, overlapping by about 2 1/2 inches. Lay six 18-inch pieces 100% cotton kitchen string vertically at about 2-inch intervals. Weave a 24-inch piece of string through the center of the strings.

Lay bacon strips at a slight diagonal across the strings, overlapping slices. Arrange chicken breasts evenly on top of bacon, leaving a 1 1/2-inch bacon border at the top and bottom and overlapping the chicken pieces slightly. Press to make even thickness.

Sprinkle with salt and pepper. Spread sausage mixture across center of chicken. Quickly lift and fold chicken and bacon over filling (be bold and do it in one motion – fold, don’t roll) using plastic wrap to lift. Tuck chicken and bacon under opposite side to form a roll.

Using plastic wrap, turn seam side up. It is helpful to have something to support the roll front and back, like a rolling pin, wine bottle, heavy measuring cups.) Pull plastic wrap away and tie the vertical strings to make a tight roll, making sure bacon isn’t disturbed and tucking it under and adjusting strings evenly as you work. Add more string as necessary to secure. Tie the lengthwise string last, weaving it back and forth in and out of the other strings as you go.

Line a roasting pan with foil; add a rack. Transfer roast, seam side down, to rack in prepared pan. Roast for 1 3/4 hours or until done in center (165 degrees F). Remove and let stand 10 minutes before slicing. Serve with remaining port sauce.

From the kitchen of http://www.frugalhausfrau.com, adapted from Better Homes & Gardens

* BHG is responsible for another one of my favorite dinners – Honey Roast Chicken with Spring Peas! I love, love, love that chicken. They’re also the inspiration behind Harvest Wild Rice Salad served alongside this dinner!

I will be bringing this Stuffed Chicken Roast to Throwback Thursday, No. 17,  where I’m honored to be a co-host as well as to Fiesta Friday number 98, with two brand-new co-hosts, Sadhna @ Herbs, Spices, and Traditions and Natalie @ Kitchen, uncorked.

Make sure to stop by and check out all the posts, and please do contribute one of your own! See you there!