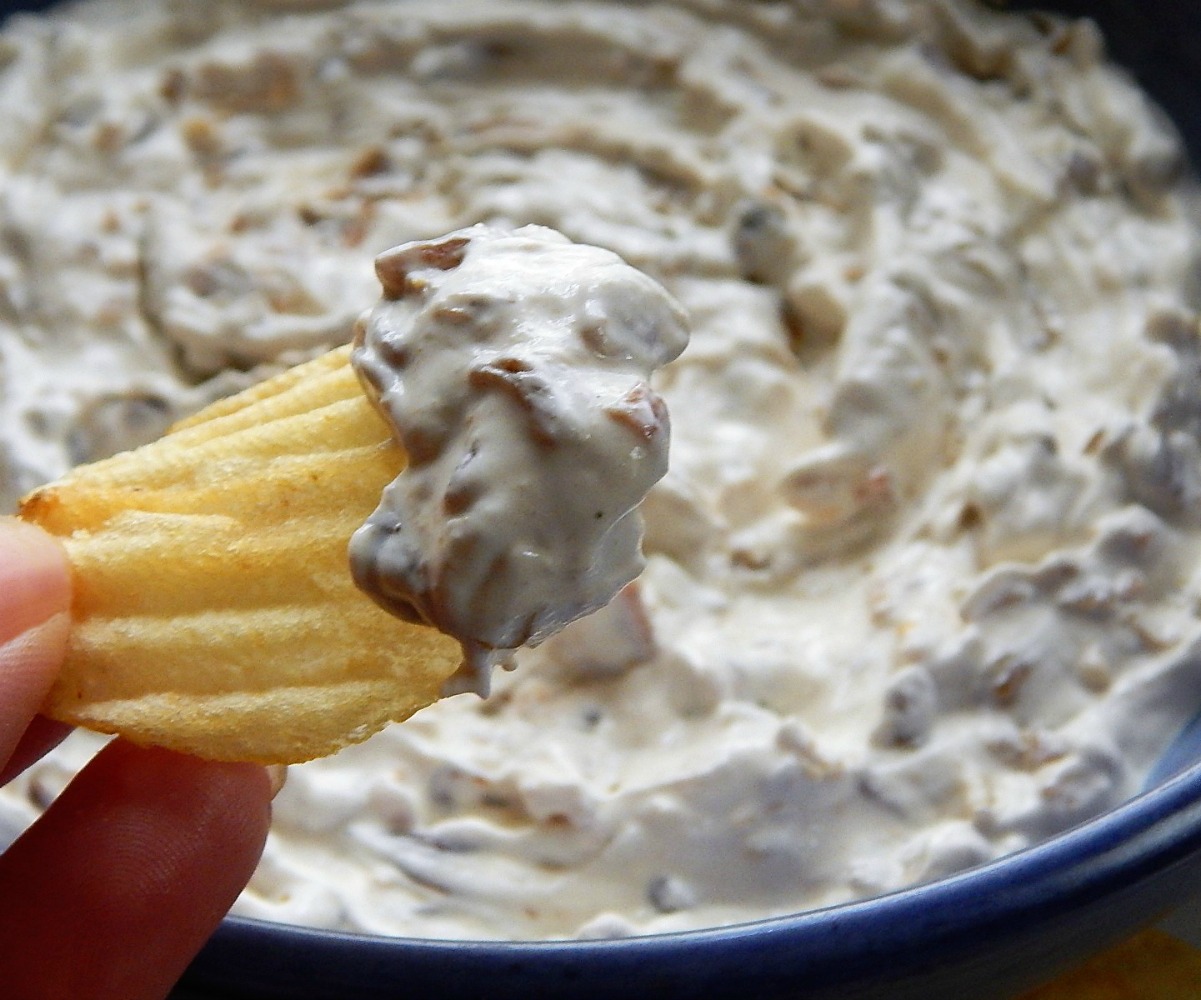 French Onion Dip – from my earliest memories, it’s always been around, whether made from the packet (like my home-made version made with my home-made onion soup mix) or bought at the store.

I love love love French Onion Dip. You might call it a guilty pleasure! The promise of this French Onion Dip with Bacon from Cook’s Illustrated (and a few extra caramelized onions from the tart I made last week) prompted further investigation! I mean bacon? C’mon!

This dip lives up to the hype! But talk about timing! The Super Bowl is coming up and we’re smack, dab in the middle of winter here in Minnesota – when you’ll see many of us getting together to watch a favorite show, do book club, play games or just hang out.

What could be better at a party than chips and dip? Especially if it is a dip that will put all others to shame. Feel free to double or triple this recipe. This dip is best if refrigerated for a while before using, so talk about a perfect for make ahead recipe.

I’d be hard-pressed to babysit a pot of onions for a half cup, but I’ve I’ve given directions in the recipe. In the meantime, I’ve learned to cook smarter. I’ll make a big pot and divide the rest up in little bags in the freezer. Here’s three ways to make a larger batch of Caramelized Onions – once you have onions on hand, throwing together a dip like this is a breeze!

Excessive stirring makes this dip sticky, but it can be thinned with a little water or more dairy. Use a good, thick sour cream. If you can’t get good sour cream, line a strainer with a paper towel, place over a bowl, add the sour cream and leave in the refrigerator until desired thickness.

Fry bacon in small skillet over medium heat until crisp, about 5 minutes, stirring often; remove with slotted spoon to paper towel–lined plate and set aside.

When frying bacon, try adding a tablespoon of water to a cold pan, add the bacon, then bring up to heat. This minimizes the possibility of the bacon cooking unevenly and burning.

Combine 1/2 cup caramelized onions, cider vinegar, sour cream and bacon in medium bowl. Season to taste with salt and pepper and serve. If time allows, this dip is better after it sits and even better after a day. May be refrigerated in airtight container for up to 3 days.

If desired, garnish with green onion and a few bacon bits.

Place the oil, onions and 1/2 teaspoon salt in a 10-inch saute pan over medium heat.

Cook, stirring occasionally, until the onions are golden brown, about 25 to 30 minutes. Remove from the heat and set aside to cool for 15 minutes.

Slice though bacon while frozen, then return to freezer.