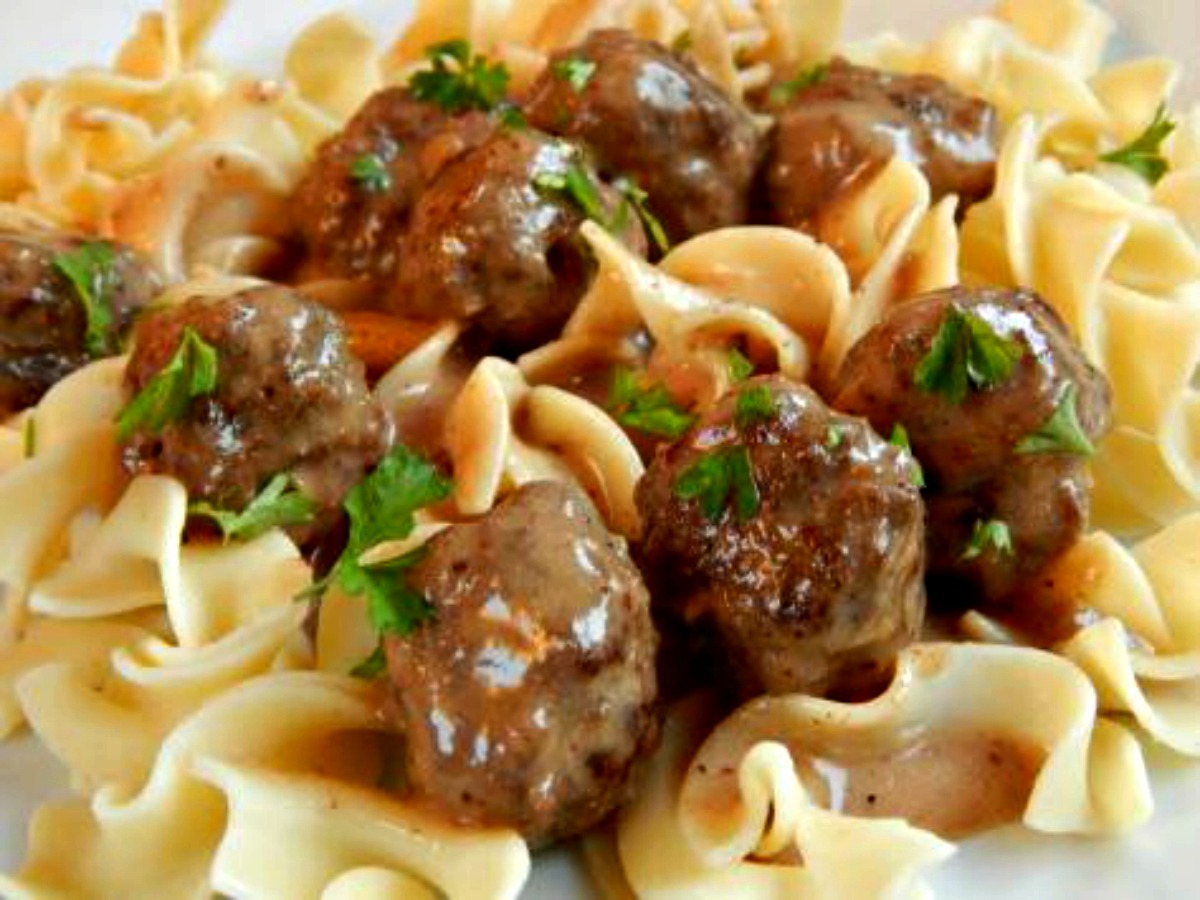 I’ve been up and down my family tree and like many Americans, I’m a crazy mix up of genes, but one thing I don’t have is a drop of Swedish blood. I do, however, live in Minnesota, you betcha, home of a large Swedish population and home of the American Swedish Institute. And I can attest that Swedish Meatballs are very popular in the Twin Cities, especially during the Holidays.

Most of my friends, even those with families originally from the Land of Midnight Sun, use a package of frozen meatballs for their Swedish Meatballs, and usually, they’ll make up a creamy and delish sauce with a lot of Sour Cream. That’s how I first learned to love Swedish Meatballs. But when I saw Tyler Florence make “Lena’s Swedish Meatballs” I knew I’d been missing out!

Tyler’s Swedish Meatballs have a darker sauce, which I’ve heard is traditional in Sweden, with just a touch of cream to round it out and make it silky. And while that silky brown sauce is so good I swear you’ll want to lick your plate, the meatballs are fantastic, too. They’re just tender little balls of love, all browned on the outside with just such a beautiful texture and flavor throughout. They’re a little labor-intensive (a scoop helps so much for portioning and an electric skillet, for browning if you have one) but so worth it.

So, friends and family, the secret’s out, now, on “my” Swedish Meatballs with that traditional brown sauce. I hope ya love them as much as we do! Serve the meatballs and sauce over egg noodles and if you want to be traditional, serve a little lingonberry jam on the side; if it’s hard to find or super pricey, cranberry sauce is an excellent substitute. The biggest secret to this recipe? Toss in a few “uffdahs” and a “doncha know” or two and nobody will know/guess you’re not Swedish.

There was a problem in Tyler Florence’s original recipe, though, the measurements were off. Tyler said the recipe would make 50 small 1″ meatballs but it was more like a hundred. And in his recipe, he browned them off and then baked them to cook them through. I found that the 1″ meatballs are perfectly done once they’re browned and there is no need to bake. My guess is that he must have made much larger meatballs.

I also used a little bit less of the butter and just a pinch of white pepper. When I make the meatballs, I use just ground beef, or sometimes just ground beef and pork, because veal isn’t readily available here. I think they’re fantastic either way though it would be nice to try it sometime with the veal.

When I make these meatballs, I pull out my electric fry pan. It makes it so much easier. I don’t use if often anymore coz it’s a little old school but I pull it out and have never given it away because it’s so useful for this recipe!

Ground Beef by many, is considered to be”cheap” meat, but that’s really not the case any longer; sometimes a cheaper chuck roast is less than ground beef. Shop for groud beef carefully, buy on sale and freeze for when you need it. For the most flavorful and unctuous meatballs, don’t use super lean ground beef, especially if you’re not using pork and/or veal.

Ground Pork isn’t always available at our stores up here in the Twin Cities and is surprisingly pricey when it is, especially considering it is usually ground from the shoulder, one of the cheapest cuts there is. If you can’t get, don’t want to pay so much or want the freshest ground pork, just buy shoulder, chunk it up and pulse in your food processor. Portion the rest out (they’re usually large) for other recipes.

I’ll buy cream at Aldi (it’s around the same price at Costco but at Costco it’s in a much larger container) or at the store during holiday sales. Cream keeps very well due to its high-fat content, usually several weeks or a month or two past the “sell by” date depending if it’s pasteurized or ultra-pasteurized. The sale price is generally about half that of the regular price so it’s a good practice to pick up a couple cartons on sale if you use cream regularly.

Add the butter in a large saute pan over medium heat. Add the onion and cook until translucent. Remove the onion to a plate and cool. Wipe out the pan with a paper towel.

In a large mixing bowl, combine the ground meats, egg yolks, and onion. Add salt, white pepper, and allspice. Squeeze excess milk from the bread and add the bread to the bowl. Measure the milk or cream left behind, add 1/8th of a cup to the meat mixture. If there isn’t that much, add more milk or cream to measure the 1/8th cup. Mix gently with your hands or wooden spoon until everything is fully incorporated.

With a bowl of cold water standing by, form meatballs about 1-inch across. Dip your fingers in cold water, from time to time, to keep the meat from sticking to your hands.

Melt the additional two tablespoons butter in pan. Add meatballs, working in batches if needed. (An electric frying pan works well here, too.) Do not overcrowd the pan. Brown all of the meatballs, turning often, until done. If working in batches, pan may need to be wiped out between them.

To make the sauce: Pour off all but two tablespoons of the fat from the skillet and return it to the heat, or pour it all off and add 2 tablespoons of butter and swirl it around to coat the pan. Sprinkle in the flour, and stir with a wooden spoon or whisk to dissolve the flour into the fat.

Slowly pour in the chicken stock, and stir to loosen the bits from the bottom of the pan. Simmer, stirring now and then, until the liquid is reduced and the mixture starts to thicken to a sauce. This will take several minutes. Season with salt and peppers, to taste. Lower the heat and stir in the cream and the black currant jam. Add the meatballs to the sauce. Simmer until the sauce thickens slightly and the meatballs are heated through 15 to 20 minutes. Sprinkle with chopped parsley.

May be made partially ahead:

If desired, meatballs may be made and cooked a day or two ahead. Add a little water to the grease and drippings in the skillet, pour into a cup and refrigerate. When ready to make the sauce, remove the fat (use two tablespoons of it for the sauce) and set aside the drippings to add in with the stock. The drippings may worked through a small strainer for an absolutely smooth sauce. Warm the meatballs through in the simmering sauce.