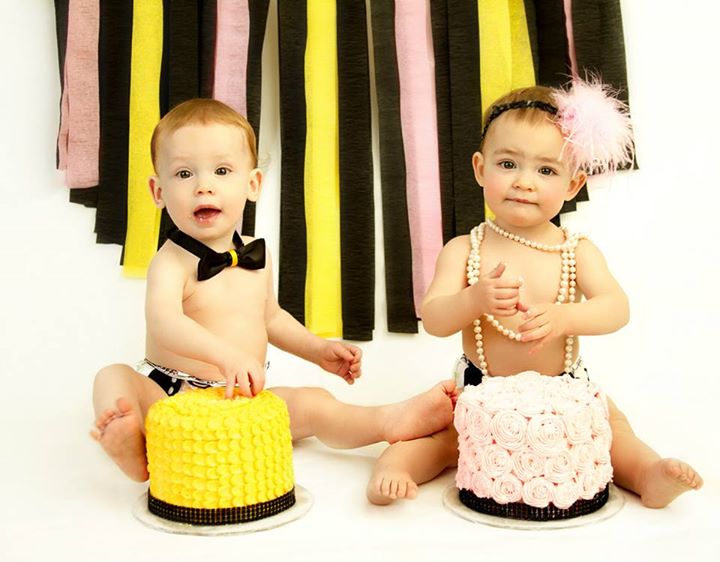 Another year has slipped by so quickly my head is spinning! The highlight was not one, but two trips to Georgia. Well, that and Child number 2, my son, is on his own. With two jobs, no less. 🙂

Just off of crutches, the January trip started with pneumonia two days in and ended with a futile 11 1/2 hour trip to and from the airport, usually 25 minutes away. My self, daughter J, son,  dog and grand children, a three-year old and twin infants were stuck in Snowmaggedon. Who knew a minivan could be so small or that the one beacon of light would be Waffle House? They stayed open just to help the stranded when everything else closed.

The Twins one year! My talented daughter made those cakes…

My Christmas visit was far easier, although hustle, bustle, commitments and a bug going around my daughter’s kept me from spending as much time as I’d have liked with the littles, my brother graciously stepped in and invited me up to his lake house. Magical, and Gibson loved it. My sister-in-law dubbed it “Dogmass” as my nephew brought along his new pup, Gus, I had Gibby and they have two of their own.

As far as blogging, I started this humble little blog for my daughter, J, and never dreamt others would find it. A few followers encouraged me, Lollie who said I made sense, bless her, Kathryn who travels from Canada to Australia and back and Jen, who has her own blog, Attempting Zero Waste. Laura Loving Life stopped by now and them, too, as did the folks at Putney Farms. Thanks, guys!

Of course, I can’t forget the Green Lizard, who reached out to me from across the globe or the Hungry Mum who visited during the night – she’s a fantastic Aussie baker.  I’d be remiss if I didn’t mention Heather from Meta’s 1942 meals, who cook’s from Meta Given’s cookbooks. They kept me going, even when my family thought I was a little nuts! Thank you guys, and Happy New Years!

Before I knew it, I was a little emboldened and commented here and there on other blogs, and now I feel as if I’ve found my “tribe.” I’m so pleased to have met wonderful cooks from across the globe, all so willing to share their specialties, time and friendship. Each “click” reported on WordPress makes me think that maybe in some small way, something I’ve shared has made a difference in someone else’s life, even if it is only getting dinner on the table for just a little less.

This year, and every year, by far the most popular posts are my post on White Sauces and What to do with Them and my page for Alcohol Substitutes. As far as recipes? Just like last year, The New and the Old 2013, a few seem to have staying power – and the ones that do are always a big surprise! I try to stay on the “healthier” side of frugal, but my most popular posts are usually the down-home standards.

Taste’s Like Chicken, Chipotle’s Chicken, a copycat recipe for the Chipotle Mexican Grill chain, came out strong, with a tremendous amount of hits from the first day on, but didn’t make the top 10. It’s still a personal favorite of mine (and my gluttonous son – how does he stay skinny?) and in frequent rotation at my house and his. I’d like to give it best personality award – I love this recipe and wish I had a bowl or burrito right now. Best to marinade overnight, though.

Cheesy Chicken and Turkey Noodle Casserole continues to make me smile, and brings in a lot of visitors. It was in the number one place last year, too. A down-home wonder, don’t tell anyone it has Velveeta and is best made with leftover Turkey or Chicken! Since it makes a large amount, it’s perfect to divide and bring a casserole to a new mom, an ailing friend or anyone who needs a dose of comfort – while still getting dinner on the table for your family.

In the number two spot is Scalloped Potatoes. These really are the ones your Grandma made, straight from a 1950 Betty Crocker cookbook. We make them every year after a holiday ham. Sometimes I defy tradition and add a little cheese for the kids. I grew up eating these at many family and church functions and they’re my ultimate comfort food. They must be for many others, too – they come in every year in the top five, usually in the first or second spot.

Who knew? Cream of Anything Soup has moved up to the number three spot. I’m guessing a lot of readers want to avoid additives and sodium, and I’ve also noticed at the store that canned soup prices have gotten high! Free yourself from the canned stuff – pennies and only a few minutes to make at home, it is so much better than the salt-laden canned varieties. Not the most exciting recipe on my blog, it is a work horse and a great foundation recipe.

A super quick little recipe, a rework when I wasn’t satisfied with what I found online, Chicken Addiction Bourbon Chicken is a favorite. While it is perfectly good using common pantry ingredients, searching out the Asian ones will give you a recipe that’s out of this world. This recipe was popular from the first day posted and has come in number four for the year in the amount of views – not bad for a newcomer to the blog. Make extra, it really is addictive.

In the number five spot is Home-made Egg Noodles. You would not believe how incredibly easy they are to make, and unlike watching the process from a chef on tv, I walk you through with photos, showing where you can go awry and how to fix it. Heck, isn’t that what half of cooking is about – fixing our mishaps and mistakes. I swear, you can’t learn that on tv. 🙂 These noodles will simply “make” any recipe you use them in. I love them in my Chicken (or Turkey) Noodle Soup.

A mixture of ground beef, cabbage and onion baked inside a tender bun, chances are you may not be familiar with the Runza or Bierock as it is more traditionally known. If you’ve grown up in Nebraska, you may have a recipe passed down through your family, but if not, try this one. I promise it won’t disappoint – on the contrary, you may find yourself making them and stocking your freezer, too. I love the simple flavors, but stuff these with almost anything!

Yet another casserole, and I do try to get beyond pasta on a frugal blog, but this one is rather unique and very good. A tuna casserole with lots of crunchy vegetables and briny olives, this Cheesy Tuna Casserole is a favorite of my daughter and was passed on to her by the in-laws. I think the Olives must be a nod to their Greek Heritage. If you’re going to have a Tuna Casserole, have this one – it beat out my post for Meta Given’s Tuna Noodle Supreme.

Number 8 in my “stats” is this marvelous stew – I call it Beef Stew with Wine or Not and Bacon. You’re probably starting to pick up on my literal naming of food…I have to make this once a year, at least, or I think I’ve missed out. It’s seldom that I eat red meat, but here is one instance that I think my stats really came through and were spot on. It’s truly a gourmet experience from humble ingredients – it’s stew done right. Make Crusty Bread to go with!

In 9th place is what I call “Almost Bobby’s Oven Fried Chicken” and it is fabulous. And yes, I “stole it off” Bobby Flay and fabulously frugalized it. Crunchy, moist, simple, and flavorful, it’s making me hungry right now. Even your pickiest eaters, even those who love fast food, will gobble this stuff up with no complaints at all. I like that even though it does have a crust, there’s a lesser proportion of crust to chicken than you’d find in a nugget and it is crunchy without being fried.

The biggest surprise of all? The number 10 spot goes to Deviled Ham. Who could guess? First posted in 2012, it’s never really received any attention, but perhaps the newer photo helped it shoot up to a higher ranking. If ever you have a big old ham at Christmas and need to bring an appetizer to a New Year’s party – this is the recipe to think of. It’s amazing how many people get excited by deviled ham. 🙂 Of course, it puts the little cans of Underwood to shame, if I do say so myself.

So as I said last year:

“…while I keep working on finding and developing recipes that reflect the better trends in nutrition and still keep the budget under control, what this year has taught me is that sometimes the old favorites from Grandma’s day and beyond still have relevance. Like that old Girl Scout song:

Happy New Years Everyone! And may you have many more new memories this year to cherish along with the old…”