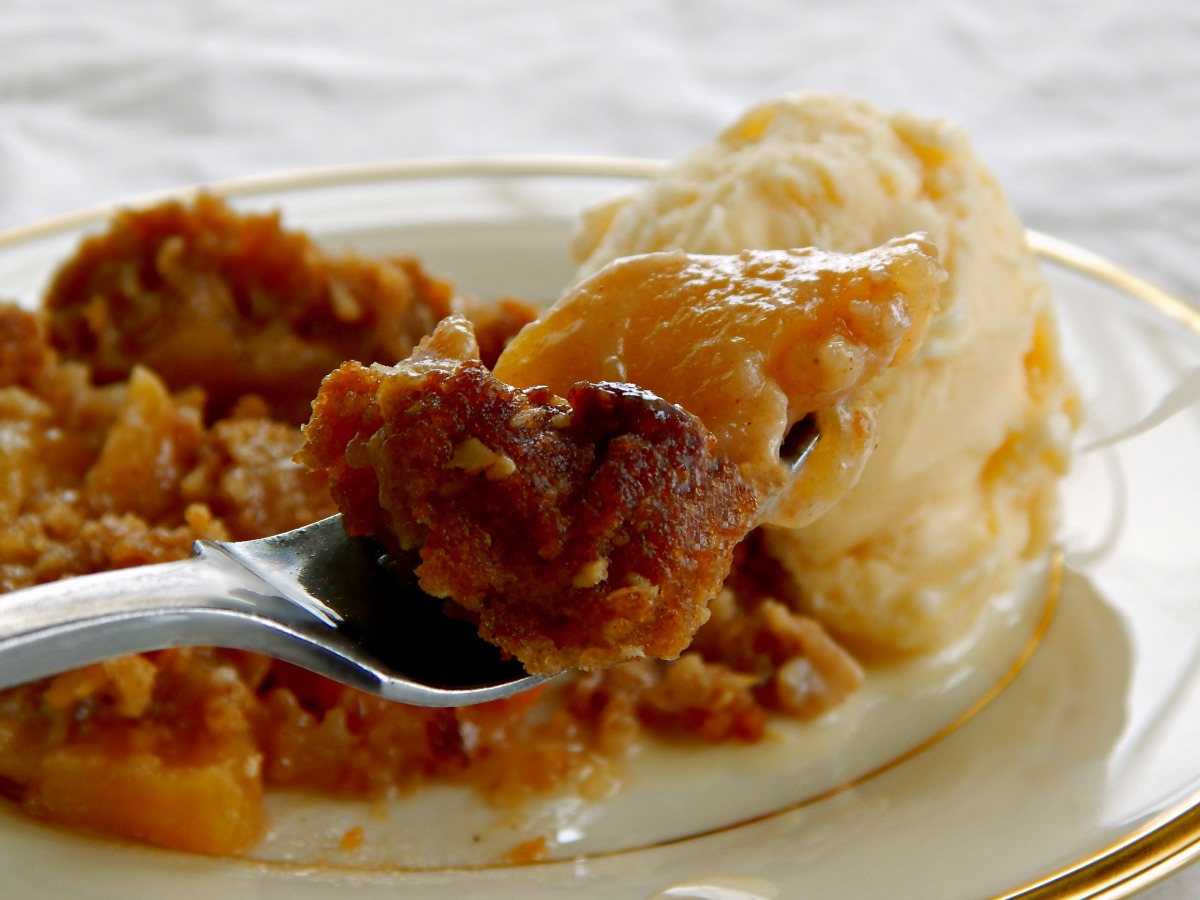 Apple Crisp is American as Apple Pie, but fruit crisps are so good with many fruits or combinations. I’ve been making variations with this simple recipe for years – so easy it’s almost a non-recipe. Don’t let that fool ya, though, these crisps are always beautiful, brimming with fresh fruit flavor.

This isn’t “my” recipe – I have it in my head it might have been developed by Pam Anderson, author of How to Cook without a Book and many other cookbooks!

Go figure, huh? I don’t know about you, but I need my recipes and could hardly live without my books, magazines & the internet! For one thing, I have no memory for details, but I can and do remember marvelous food! And want to have it again and again and pass on treasured food memories to my kids and grandchildren. Of course, that doesn’t mean I’m not going to tinker!

My first fruit crisp?  Apple crisp, with a recipe almost like this, made in 7th grade. It had an Oatmeal Streusel topping, though this one is a bit fancier. I learned it in 4-H and made over and over until the whole family was over it! Then I moved on to Chocolate Pudding! So here’s one to make, to teach and to pass on.

Note that this has an unusual baking temperature, which works very well. The Streusel topping, I think, is best made by hand. I often double or triple it and toss in the freezer, which is how I discovered how much better it turns out when sprinkled on frozen! Make the streusel first, spread on a plate or sheet pan and put it in the freezer as you prepare the fruit. Nuts can be added to the topping, if desired.

I have one more secret, too, which isn’t in the recipe, which I often use when I make an apple or a pear crisp. If I happen to have any of my home-made Butterscotch Sauce or any other caramel type of topping, I’ll sometimes drizzle the top of the crisp – 1/2 to 3/4 cup or so before adding the Streusel topping. It’s fantastic and makes a “sauce” that can be spooned over ice-cream. Today I used a Ginger Caramel Sauce.

When I use the Apple and Caramel combo, I am not kidding you, people go nuts! Try it and see – you’ll be lauded as a Queen (or King) and people will toss rose petals on your path and fan you with palm fronds. Well, maybe not, but they will think you’re a genius when they taste this! 🙂

Preheat oven to 425 degrees. Toss fruit with lemon and zest, spread evenly in an eight-inch square pan, pressing down lightly.

Mix brown sugar, flour, oatmeal, spices, and salt. Add butter and mix into coarse crumbs. May be done in the food processor, about 10 pulses, then five seconds. Sprinkle over the fruit.

Place in oven for 15 minutes, then reduce heat to 350 degrees. Bake until topping is brown and fruit is tender when tested with a fork, 30 to 40 minutes.

Serve warm or at room temperature, with whipped cream or vanilla ice cream if desired.

Fruit for Any Fruit Crisp:

Put Your own Spin on It:

2 thoughts on “Any Fruit Crisp with Streusel Topping”