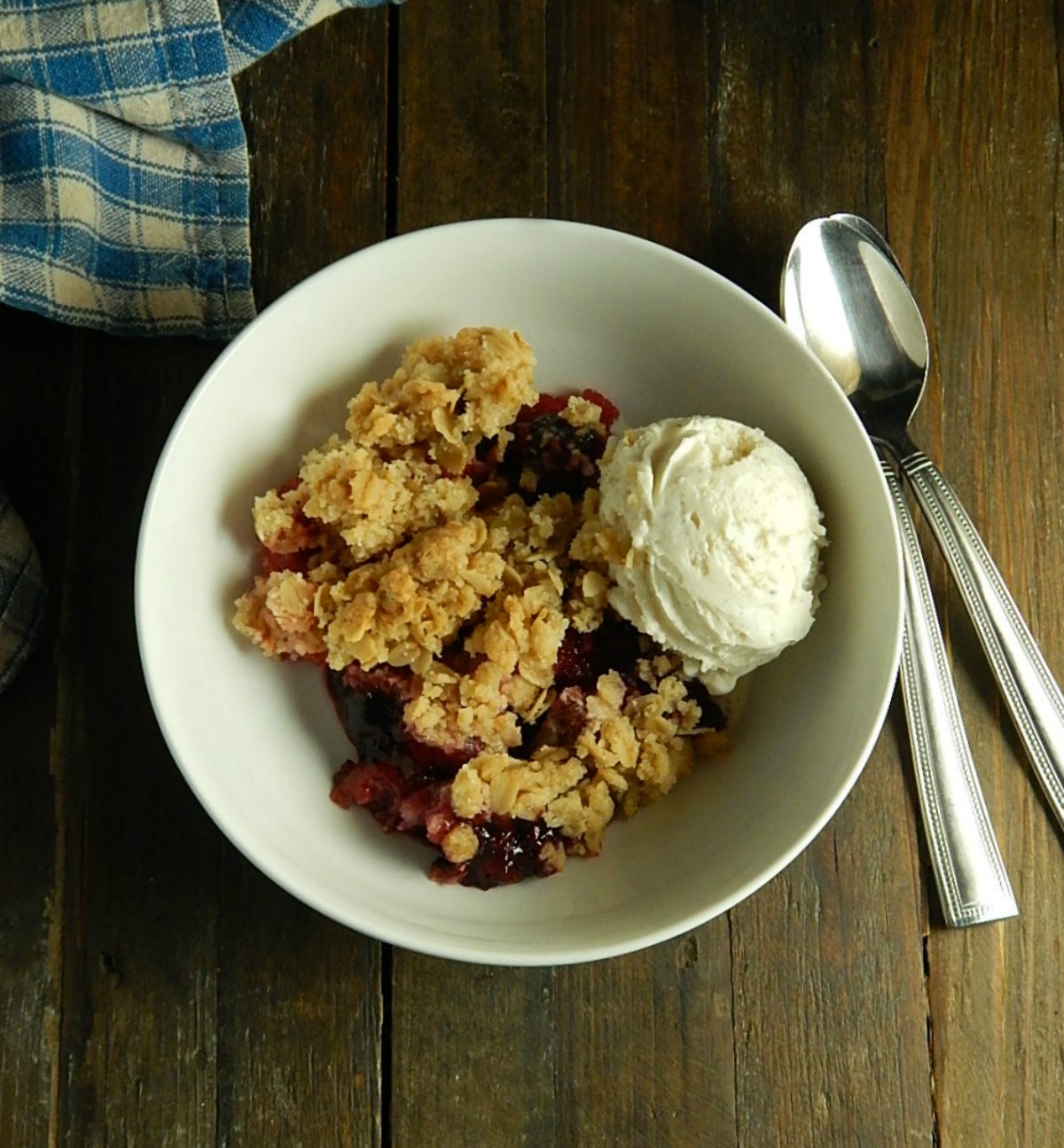 Part of the reason that this recipe is so simple, and the reason the berry flavor really shines, is that there’s nothing in this crisp to detract from the true berry flavor. There’s no spices, no vanilla, and def no brown sugar. Other than the berries, there’s just a touch of lemon zest and that’s only to enhance the flavor of the berries, not to add its own notes to this simple song.

You can use just about any berry you’d like in this recipe, even just one kind if you want, although the mix of berries is what gives the crisp a complexity all of its own. It’s best made partially with strawberries because they’re a little bulkier than most berries and help give a little volume.

My favorite combination of berries to use in this crisp is strawberries, blueberries, blackberries, and raspberries, and of course of all of these, at least in my area of the country, the blackberries (which are one of my fave things in the world) are the priciest. So my next fave option would be the strawberries, blueberries, and raspberries. Of course in season, if you forage or pick own or hit up a great sale, that changes everything! And if you have any other favorite berries, feel free. It’s really impossible to go wrong if you use what you like.

The crispy topping, made with oatmeal, a little flour, white sugar and butter bakes up into a beautifully crunchy and crispy topping. It’s almost shatteringly (gosh is that a word?) crispy. I love that is is more neutral in flavor than toppings made wtih brown sugar, which always has a little caramelly taste.  It’s all about celebrating the berries and the more neutral topping lets the berry flavors ring out clear and true. It holds up well with ice-cream, too! Bonus!

If you’d like to see other desserts made with berries and/or fruit on my site, check out my main menu for Fruit Desserts. You might find something else you like, too.

I gotta tell you that almost every time I post a fruit dessert without cinnamon, someone comments on Pinterest that it has no “flavor.” I appreciate berries as being pricey and precious and so flavorful on their own that they shouldn’t be disguised by cinnamon, which is a warm, strong spice and does little to enhance berries. To me cinnamon is best left to spice desserts, pumpkin, spice cakes, desserts with apples and pears, desserts more often served in the autumn and winter.

Now if you know you will want it, feel free to add a touch of cinnamon or a dash of vanilla. A teaspoon of the vanilla in the berries, maybe and the cinnamon in the streusel. I’m not the food police, but do know that one of the best ways to bring berry flavor forward is just a little lemon. The acidity brings the flavors out.

And as far as making this crisp, the only hard part about this recipe is the waiting! Make sure to very gently stir the berries to keep them as intact as possible, especially if using any very soft berries like blackberries and raspberries.

The streusel does take a few minutes to mix. Try to work the butter in as much as possible, and squeeze it a bit. It’s likely a little will be “loose” and that’s ok. Just break up those squeezed pieces into little clumps and sprinkle any of the loose streusel over. Don’t pack down or pat it into place. When you don’t , some of the juices from the berries bubble up and through the topping and that’s so delish!

Anytime I make a fruit-based recipe like this, I place a little aluminum foil on the rack below the dish just in case there is a boil-over in the oven. That can be reused to cover the berry crisp if there’s any left. And speaking of covering, if you do have leftover, place in the refrigerator uncovered until cool and then cover it; that will help the topping stay as crispy as possible.

I really already talked a bit about saving money on berries. Be versatile with the berries you use; if one is too pricey, just omit it and use more of the ones that cost less. Buy in season if possible (nevermind you that it’s November right now, lol!) buy around holidays when the price is often lower and sales are great. Use frozen if the price is great. Check out Aldi or your buyer’s club if you have one. Their everyday prices for fresh and frozen often beat out the grocery store sales. And if you garden, pick your own or forage, kudos!

Stock up on oatmeal in the fall, buy it in bulk when it’s cheapest or look for sales with coupons at the grocery. You might find it on sale during holidays that are known for brunches: Mother’s Day & Easter. Aldi is a great place to pick up oatmeal if you have a store nearby and is indistinguishable from the name brand.

If you aren’t all that familiar with tapioca, it’s a starch from the roots of the cassava plant. It’s right in the baking aisle, usually with all the boxed puddings. It is the main ingredient in tapioca pudding and is often used to thicken pies, other fruit desserts, and soups and stews. A box keeps literally for years, and it’s pretty inexpensive.

In season in the winter months, look for bags of lemon on special – crunch the numbers. There’s really not much reason to pay full price as lemons store well in a bag in the fridge as long as they’re kept out of condensation. Look for lemons that are heavy for their size. Use every bit – grate the rind then wrap and save the rest for something else. Cost for one lemon: 33 cents.

In a large bowl, combine the berries. Mix together sugar the 2/3 cup of sugar, tapioca and lemon zest; sprinkle over berries and toss gently. Pour into a greased 11×7-inch or equivalent. baking dish; let stand for 15 minutes.

Meanwhile, make the topping, in a small bowl, combine the flour, oats, sugar, and butter. Sprinkle over berry mixture when the 15 minutes is up.

Bake at 350° until filling is bubbly and topping is golden brown, 45-50 minutes. Serve warm and, if desired, with vanilla ice cream or sweetened whipped cream.

I’ll be sharing Easy Mixed Berry Crisp at Fiesta Frida 301, hosted this week by this week by Antonia @ Zoale.com and Angie, herself.