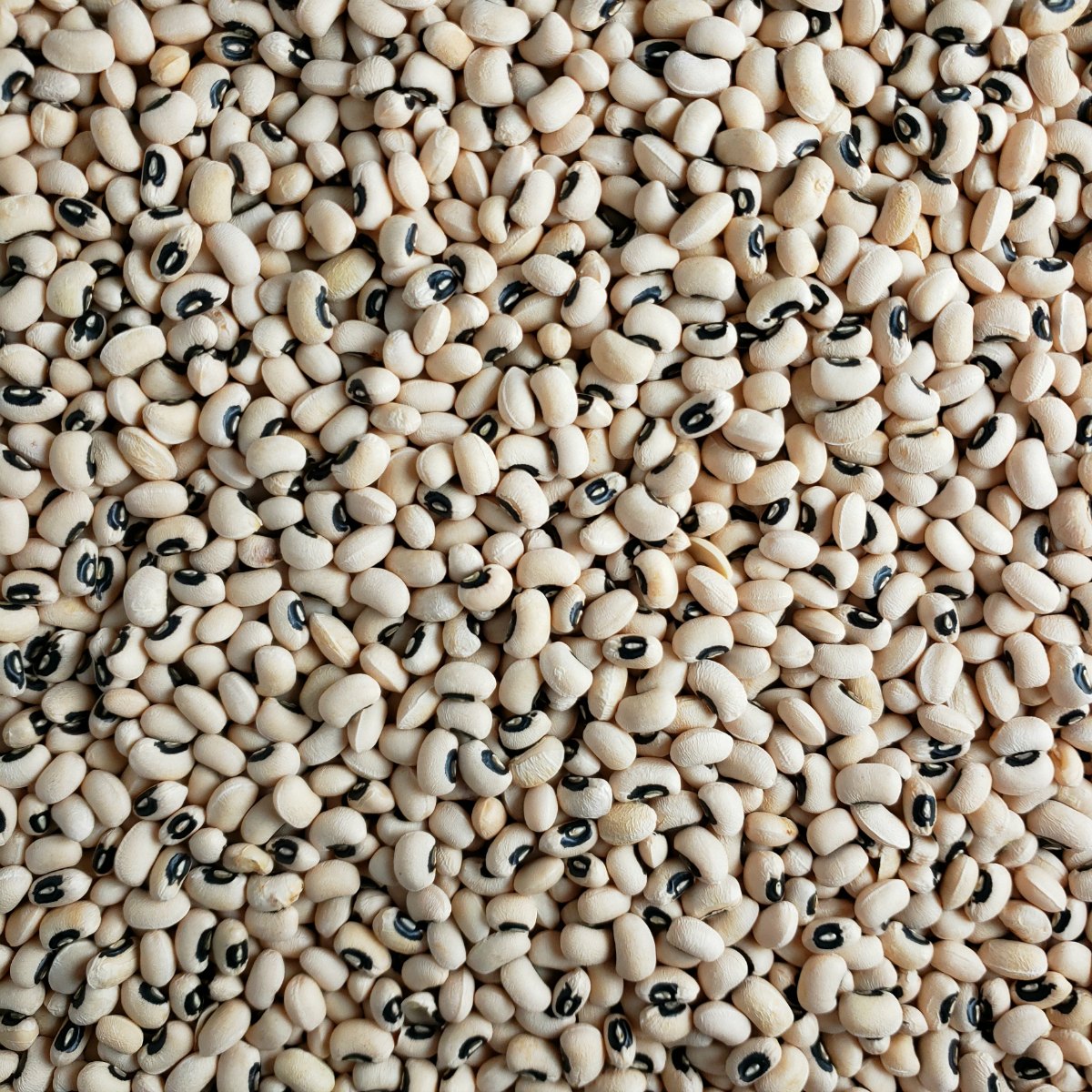 Not too long ago, I was looking at some of my posts about Black-Eyed Peas. A Black-Eyed Pea & Rice Salad (I loooove that salad!) and since the Holidays are approaching and Black-eyed peas are considered a “lucky” dish for New Year’s, I was thinking too, of the dish, Traditional Black Eyed Peas. Since they have been on my mind, I thought now would be a great day to talk about Black-Eyed Peas, their nutrition, how to shop for them and how to store them.

Over the years, I have given shopping hints on almost every post. This year, I’ve decided to move forward with my original vision, and cover an ingredient from some of my posts pretty much from top to bottom, with a goal of eventually having my site be a better resource for you. Today, obs, I am choosing Black-eyed peas.

What to Know About Black-Eyed Peas:

The black-eyed pea, black-eyed bean or goat pea is a legume, a subspecies of the common cowpea. It’s known the world over for its creamy color with a dark spot, hence the name “black-eyed”. The commercial variety is called the California Blackeye; in the South, there are numerous varieties grown, many of them heirloom, and the sizes and color of the eye may be different. Black-eyed peas of all varieties are green when freshly shelled and brown or buff when dried.

According to Wikipedia, the first domestication probably occurred in West Africa, but the black-eyed pea is widely grown in many countries. It was introduced into the Southern United States as early as the 17th century in Virginia. Most of the black-eyed pea cultivation in the region, however, took a firmer hold in Florida and the Carolinas during the 18th century, reaching Virginia in full force following the American Revolution. The crop would also eventually prove popular in Texas.

A very popular dish that originated in Texas is Cowboy Caviar. Throughout the South, the black-eyed pea is still a widely used ingredient in soul food and cuisines of the Southern United States.

In the South eating Traditional Black-eyed Peas or Hoppin’ John on New Year’s Day is thought to bring prosperity in the new year. The peas are typically cooked with some type of pork and served with a chili sauce or a vinegar-based pepper sauce. The traditional meal also includes collard, turnip, or mustard greens, and ham.

What to Know About Black Eyed Peas, Shopping:

Black-eyed peas can be purchased dried by the bag (and probably in bulk in some stores), frozen in limited areas as well as canned and you may be able to purchase fresh if you live in an area where they are grown. Package sizes and prices all vary by how the peas are processed, brand, season and location, so a hard and fast comparison is tricky. (See how to compare, below). A serving is considered to be 1/2 cup of cooked black-eyed peas.

Black-Eyed Peas, like most dried beans, are naturally inexpensive and thrifty; even so, there are a few things to think about when buying. Buy dried black-eyed peas or any legume from a store with a high turnover and you will be more likely to get a fresher, better quality bean. Stores in different areas of town (even different stores in the same chain) may have different pricing on basics like legumes. Check “ethnic” markets, too.

Always, the products used the most are the ones to watch the prices on; if Black-eyed peas is a “one-off” item, cooked once a year, the pricing isn’t as important as it if you are using them regularly or need them in quantities for a crowd.

How to Compare Pricing, Dried and Canned:

The easiest way to compare prices across all the available options is to price each option out by serving (1/2 cup) by dividing the price by the number of servings.

Since that may be hard to visualize and can be meaningless (especially since the per-serving price is small) it is helpful to then turn that into a per-pound price: Multiply the price per serving by 11 (the number of servings in a one-pound bag). That way all options can easily be compared to a one-pound bag of dried peas, the least expensive option.

In my area, this week:

What to Know About Black Eyed Peas, Storing:

Dried black-eyed peas should be stored in a cool, dry location off the floor, in heavy plastic or another airtight container. If the wrap is flimsy, transfer to a more appropriate container. They are best if used within the first year or two; as they age they become harder, more difficult to rehydrate and take longer to cook. A little baking soda will aid in softening hard peas.

Although no studies seem to have been done on vitamin degradation on dried black-eyed peas, according to the University of Nebraska (link at bottom of page) it’s likely that if the dried beans follow the pattern of other foodstuffs in that after two to three years, while the peas will still be safe to eat, vitamin loss will occur and after five, it’s likely that many of the vitamins will no longer be present.

Canned Black-eyed peas are generally stamped with a “best” date (picked out by the producer) of two to three years after processing, but stored correctly, under 75 degrees F. with no dents or bulges, according to the Canned Food Alliance will still be safe for years and possibly decades.

Frozen black-eyed peas are best used within 6 months, maybe a bit longer if they are in a deep freeze. Again, the will still be safe to eat if frozen longer but may suffer freezer burn or become dried out.

While you’ll want to check under the sections below for hints on cooking, if you are interested in cooking specifically for longer storage, consider the following:

What to Know About Black Eyed Peas, Before Using:

Any fresh or dried beans should be thoroughly examined and sorted through for stones and debris; today’s processing methods usually are pretty thorough but still, stones can be found and that can potentially be an expensive trip to the dentist.

Dried black-eyed peas generally don’t require the amount of soaking as many legumes, but soaking will speed along the actual cooking process. See my post on Soaking & Brining Beans, Traditional or Instant Pot for more info on that process and know that soaking can aid in digestion. See the Downside, below.

In addition to Brining, soak with one of these methods:

In addition to my post of Brining Beans, you might want to take a peek at my post for cooking basic black-eyed peas. I gotcha covered with Black-eyed Peas Stovetop, Slow Cooker & Instant Pot.

Just recently I came across a small rock & a dirt clump in my dried beans.

To store your cooked black-eyed peas (or any legume) never place a large pot of them in the fridge or freezer or cool to room temperature before refrigerating. Instead, place into shallow containers so they cool quickly and refrigerate or freeze promptly.

As with any prepared food, limit the amount of time (keep the total time under 2 hours) the black-eyed peas are in of the “danger zone” of 40 degrees F. to 140 degrees F. Beans because of their density need to paid particularly close attention to. Discard beans or peas left out longer than two hours.

Use cooked black-eyed peas within 4 to 5 days.

What To Know About Black Eyed Peas, Nutrition And Health Benefits:

As with all legumes, black-eyed peas are especially good sources of soluble fiber, which helps prevent type 2 diabetes by keeping blood sugar balanced after you eat. Soluble fiber also binds to cholesterol and carries it out of the body. The folate and iron can aid in producing enough red blood cells to avoid developing anemia. Manganese is an antioxidant with a very important function: It protects mitochondria, the structures inside cells that produce energy and it also helps metabolize fats, carbs, and protein. Vitamin A is needed for a properly functioning immune system and helps to protect vision.

I just realized that the charts from My Fitness Pal, below, for canned Black-eyed peas and homemade, made from dried, don’t show all the nutritional information. In the meantime, I’ll look for some more complete charts.

What To Know About Black Eyed Peas, The Downside:

Canned black-eyed peas contain quite a bit of sodium; a half-cup serving can contain up to four to five hundred milligrams of salt while the recommended daily intake for an adult is less than 2,300 mg of sodium per day, equal to about one teaspoon of salt. A person with hypertension may be told to eat even less: 1,500 mg per day. Rinsing the canned black-eyed peas will help to reduce the amount of sodium.

Legumes of all types are notorious for causing bloating and gas, often rated second only to milk. While some blame the fiber, that’s just part of the story. Very Well Health explains the process well. Beans contain a sugar called oligosaccharide that the human body can not break down and absorb in the same way that it breaks down other sugars by the normal digestive process that takes place in the small intestine. This is because the human body actually does not produce the enzyme that breaks down oligosaccharides.

The Oligosaccharides in beans make it all the way to the large intestine undigested. It is the bacteria in the intestine that finally breaks down these sugars. Doing so causes fermentation and the production of gas that we release as flatulence. Rinsing your black-eyed peas (before and after soaking) and soaking them as well as cooking thoroughly can help eliminate potential issues. Soaking beans allows the dried beans to absorb water, which begins to dissolve the starches that cause intestinal discomfort.

There is an enzyme that breaks down oligosaccharides, called alpha-galactosidase. This enzyme, which the human body does not make, is derived from the fungus Aspergillus niger and is available in pill form under the brand name Beano and others. Those with diabetes should be aware that this enzyme can cause a rise in blood sugar, and they should not be taken by those with fungus allergies or with the genetic disease galactosemia.

And while it’s true that for some people, fiber can cause issues, for the rest of us it is simply a matter of indoctrinating ourselves to increased intake. Start small, eating a few tablespoons of beans at a time and eat them more often and it’s likely that you’ll have little to no problem adjusting naturally.

There are certain folk remedies for reducing the potential for gas while cooking. In Mexico the herb Epazote is often used in bean dishes; the herb is very robust and easy to grow and you may recognize it as a common weed in many areas. The other herb said to help eliminate issues when cooked with beans is Ajwain.

Epazote – photo from the Grower’s Exchange

Here are the few black-eyed peas recipes on my site along with my post on Soaking and Brining Beans. I hope you’ll love some of these recipes or that I’ve inspired you to use black-eyed peas in some of your favorites!

I’ll be sharing What to Know about Black-eyed Peas at Fiesta Frida 301, hosted this week by this week by Antonia @ Zoale.com and Angie, herself.

15 thoughts on “What to Know About Black Eyed Peas”