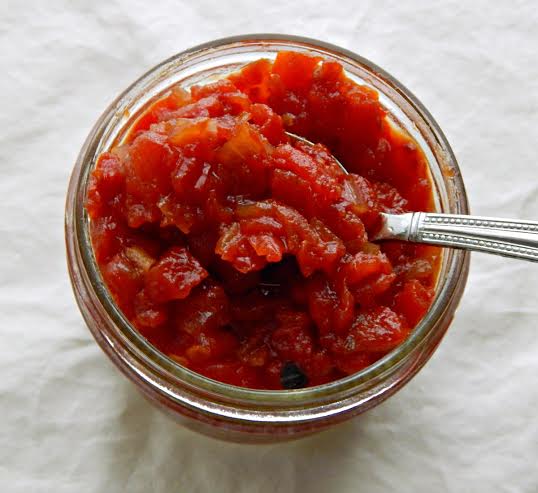 In honor of the upcoming New Year’s (and to use up a bag of black eyed peas and a couple of ham hocks languishing in my freezer) I decided to make Black Eyed Peas. And there is no better accompaniment to Black Eyed Peas than a my home-made Chili Sauce.

Now by “mine” I mean the one I only slightly adapted from Sheila Lukens’ recipe in her USA Cookbook – You might be familiar with her Silver Palate cookbooks. I’ve been making her Garden Chili sauce for years, and originally chose this recipe because it reminded me of the vague list of ingredients my Grandmother left – another of her recipes with no instructions – like her Irish Apple Cake! 🙂 But no worries – I included Sheila’s orignal recipe with my changes in parentheses.)

If you’ve never had a home-made chili sauce, this will blow you away. My son describes it as “overwhelming, flavors flying at you from all different directions – spicy, sweet and confusing!” And it is. Sweet, sour, and just a little hot, you’ll find a zillion uses for it.

While I’ve used a Heinz Chili Sauce in my meatloaf topping and again in the old standby for Pulled Briskit or Shoulder, this Garden Chili Sauce is a whole ‘nother animal. You can’t even compare it to Heinz.

Today, I cut back the recipe and used canned diced tomatoes since it’s (duh) December in Minnesota and I couldn’t come by decent tomatoes. That’ll teach me! But it was surprisingly good, just a little chunkier than usual due to the firmness of the canned tomatoes.

This is a sauce, though, best (and least expensive) made in the summer with gorgeous home-grown tomatoes. If you don’t have your own, hit up a farmer’s stand or a farmer’s market. I have my own pickling spice that is excellent in this.

Prepare 4 1 pint jars and lids by sterilizing in boiling water according to manufacturer’s instructions.

Tie the pickling spices (and mustard and celery seeds if using) into a cheesecloth bag, add to the pot and cook over medium-low heat until reduced by half, stirring occasionally to prevent sticking, about 45 minutes.

Add the vinegar and cook another 40 minutes over low heat. Remove the spice bag and stir in the lemon juice.

Pack the hot sauce into the jars, leaving a space 1/4-inch from rim; seal and process according to manufacturer’s instructions. Store in a cool, dry place; refrigerate after opening.

Note: if you don’t wish to can this sauce, consider portioning out in Ziploc bags and freezing or reduce the recipe. This will keep for several months in the fridge.

From the kitchen of http://www.frugalhausfrau.com, adapted from The USA Cookbook

I’ll be taking Garden Chili Sauce to the Fiesta Friday 100 anniversary extravaganza, and I’m also co-hosting this event, so a big shout out to Angie from the Novice Gardener and Fiesta Friday for putting the event on and Steffi from Ginger&Bread, Suzanne from APugintheKitchen and Judi fromCookingwithAuntJuju for co-hosting, too. Stop by, say hi, visit and mingle and I hope to “see” you there!