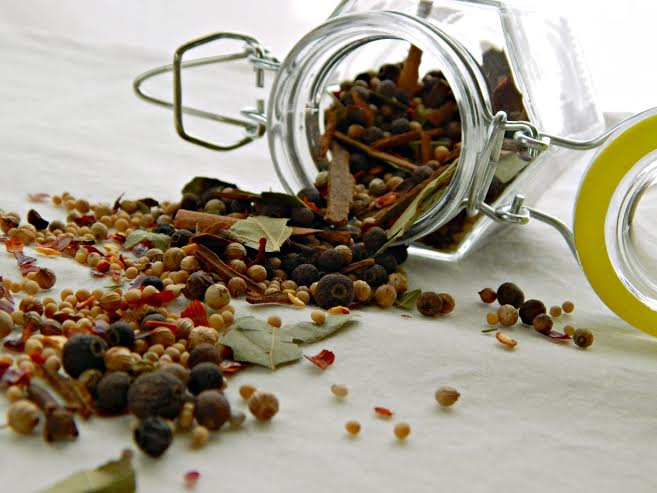 Most pickling spice recipes share a number of standard ingredients with just a few variances in amounts and proportions, and many have an extra special touch or two that makes them stand out. Here’s a recipe that will work well in almost any recipe that calls for “pickling spice.”

Unless you’ve been lucky enough to have a special recipe handed down, you’ll probably want to experiment a little here and there to find your own special blend. Maybe you’ll like one recipe for a certain kind of pickle or recipe and then want to tweak it for another. Make notes on what you’ve used and how the final product tasted.

I don’t do a lot of pickling, so I tend to stick to the basics: Mustard Seed, Coriander, Allspice, Clove, Cinnamon and Bay. I usually add Pepper of some sort, whole peppercorns and some Red Pepper flakes and now and then a little ginger. I like to stay away from anything powdered because it makes for a cloudy pickle brine.

So here’s my recipe, handed down, now, to you! So tweak away and make it your own! This will store, in a tightly sealed jar, literally for months and months, although the first ingredient to lose its punch will be the red pepper flakes.

Mix all ingredients together. Contents will settle, so gently stir before using.

Note: if you’re only using a portion, make sure there is an appropriate amount of the clove in your measure.

I’ll be taking this Pickling Spice to the Fiesta Friday 100 anniversary extravaganza, and I’m also co-hosting this event, so a big shout out to Angie from the Novice Gardener and Fiesta Friday for putting the event on and Steffi from Ginger&Bread, Suzanne from APugintheKitchen and Judi fromCookingwithAuntJuju for co-hosting, too. Stop by, say hi, visit and mingle and I hope to “see” you there!