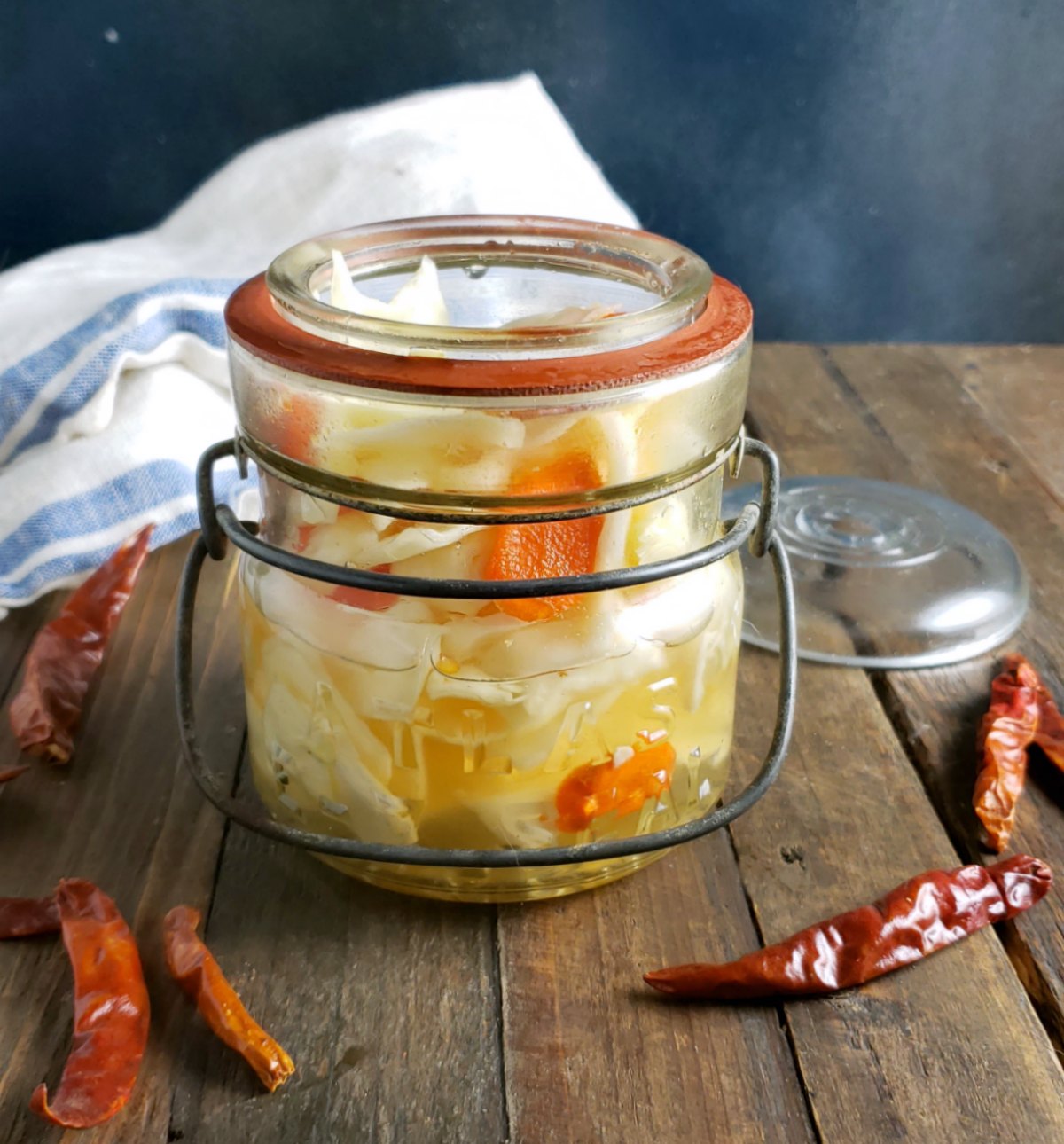 I’m so psyched about this Quick Asian Pickled Cabbage. It’s easy, it’s humble and it inspired a whole meal. This is a recipe that mimics some pickled cabbage I had once at a restaurant so maybe Asian “leaning” would be more descriptive. Honestly, though, I don’t think anyone will search for that!

Hey, as I’m writing this, the Coronavirus is really picking up everywhere and I’m pretty sure that I’m not the only one who’s picked up a few cabbages when they’ve been on sale the past few weeks before St. Patrick’s day in anticipation. If there was ever a veggie that keeps great, it’s gotta be cabbage! It always keeps best in the fridge, but it will do well in a cool area, maybe a basement or the garage. Make sure it’s well ventilated (not wrapped in plastic.)

One of my cabbages, though was looking a little worse for wear, the edges getting a little wilted, so I thought that would be a great time to do something with it. If there’s one thing about pickling, it does help preserve just about anything for a little longer in the fridge. (See my page on Pickles & Related Items for a few more recipes.) This is a recipe that’s just a quick little refrigerator pickle; there are a lot of fermented cabbages (not just Kimchee) throughout Asian cuisine, but that’s another day, another project.

But this pickled cabbage is super simple and amazing fabulous for only having just a few ingredients, the basics are cabbage, carrots optional, vinegar (I’ll give you some options) sugar, and salt. There are two ways to look at pickles like this: they can be a palette cleanser, a foil for a more intense dish (like the Waterfall Pork I served it with) or a hotter or more intense flavor to brighten up a more mundane dish. This is definitely the first! It’s sweet and crunchy with just a little zing, and even though I tossed in a couple of dried peppers it’s not hot at all, they just add a little depth.

I’ve seen recipes around that claim this little dish is “authentic” and it is if you live in the US! To claim it as Thai or Vietnamese is a pretty big stretch! But yanno what? It is inspired by and not having to stand by any hard or fast rules or be obligated to recreate a traditional recipe gives us lots of options to play with our food! That’s perfect for coming up with a recipe that’s going to be able to use what we might have in our pantries.

Asian Pickled Cabbage really is simple and you can make as much or as little as you’d like, just scale the recipe up or down. All you do is cut the cabbage into rough inch wide pieces and thinly slice carrots. Then heat a mixture of rice (or rice wine) vinegar, water, sugar, and salt and pour it over the cabbage. Let it sit preferably four hours or more and it will keep well in the fridge for several weeks if made as directed.

The cabbage should be covered with the briny vinegar mixture and depending on the containers used, you may need more or less liquid. I’ve given the amount I used when I placed the cabbage in quart jars.

I used a few whole dried peppers (chili pequin) in pickled cabbage, not to make it “hot” but just to add a hint of extra flavor. Since they are dry and would take forever to release any flavor as is I tossed them in a skillet until they started to puff up a bit, then turned them and let them go a few more seconds. That helps the essential oils release into the brine.

As far as Rice Wine Vinegar or Rice Vinegar they’re the same thing but don’t confuse either with Rice Wine, which isn’t a vinegar. Rice Wine Vinegar or Rice Vinegar can be even more confusing. In addition to the plain version, they can come in a Seasoned version which is sweet or a Flavored version, like one I bought by mistake that is Mango flavored. For this recipe, don’t use flavored, but the Seasoned can be used, see below.

What Kind of Cabbage & Vegetables Can I Use:

Any green cabbage from plain old garden cabbage to Napa or similar varieties. All kinds of vegetables and some fruits can pickled but I like to stick to items that will go well with the cabbage. Bell peppers, cauliflowers, and onion, yellow or white or the sturdier parts of green onion in addition to carrots will all be delicious in this recipe.

What Kind of Vinegar Can Be Used:

The standard is the rice (rice wine) vinegar but you can make substitutions. Go by taste in the substitutions. You’re looking for a bright contrast between sweet and sour, not a harsh, bracing concoction.

If you don’t have plain rice (rice wine) vinegar, you can use the sweeter seasoned version but you will probably want to cut back on the sugar. In a pinch sub in some other vinegar. White wine vinegar would be a good sub. If all you have is white vinegar or apple cider, you can still use them but they are harsher. Add a little extra water and a little extra sugar, maybe a tablespoon or two of each.

Options For Flavoring and/or Dried Chiles:

If you’d like to use a few dried peppers, the ultimate would be a dried Asian pepper. They’re super hot so be careful. I used Chile Pequin because they’re easy to find in many grocery stores and widely used in Mexican cooking. A few red pepper flakes could be used instead and even a few black peppercorns or in a pinch, a few grinds of black pepper can add some interest. If you would like to make this pickled cabbage “hot” just use more peppers.

You can experiment and make the pickled cabbage more complex by adding in a thin slice or two of ginger, a star anise or a few coriander seeds. Other pickling spices that will go well might mustard seed or allspice.

I assume no one will be shopping for anything unless it is an absolute necessity but I am always the eternal optimist! This too shall pass so I’ll include my usual buying strategies.

Cabbage is a cool-weather crop and often at the best pricing in the fall with one exception. Around St. Patrick’s Day you’ll see it drop to a rock bottom price as stores will get very competitive to get you in the door. I always advise to buy extra; this is when you want to make your cabbage rolls, and it’s fabulous in so many soups and makes a marvelous braise as a side, maybe with sausages. You can check out my post, Saving on St. Paddy’s Day from my series on Win at the Grocery for other items that might be at a low in early March.

Plain old white vinegar in the jugs usually go on sale before Easter (My Easter post is Easter & Lent, Leveraging the Sales) but the big surprise is that many kinds of vinegar go on sale right along with it. They are often unadvertised, so check down the condiment aisle as you shop. For specifically Asian ingredients, watch around the Chinese New Year, which varies every year (it begins on the day the new moon appears between January 21st and February 20th) for often unadvertised sales. If you live near an Asian market, that’s the place to shop for those ingredients (and others) at a low.

Place cabbage, carrots and chili peppers in a large, non-reactive bowl or divide into jars. Bring vinegar, water, sugar, and salt to a boil, stirring until sugar and salt are dissolved. Pour over cabbage, let cool then refrigerate for at least four hours.

Note: To prepare chiles, heat a skillet over medium-high heat. Add the chili peppers and allow to toast until fragrant, turning often as needed, watching carefully so as not to scorch, about 30 seconds or so.