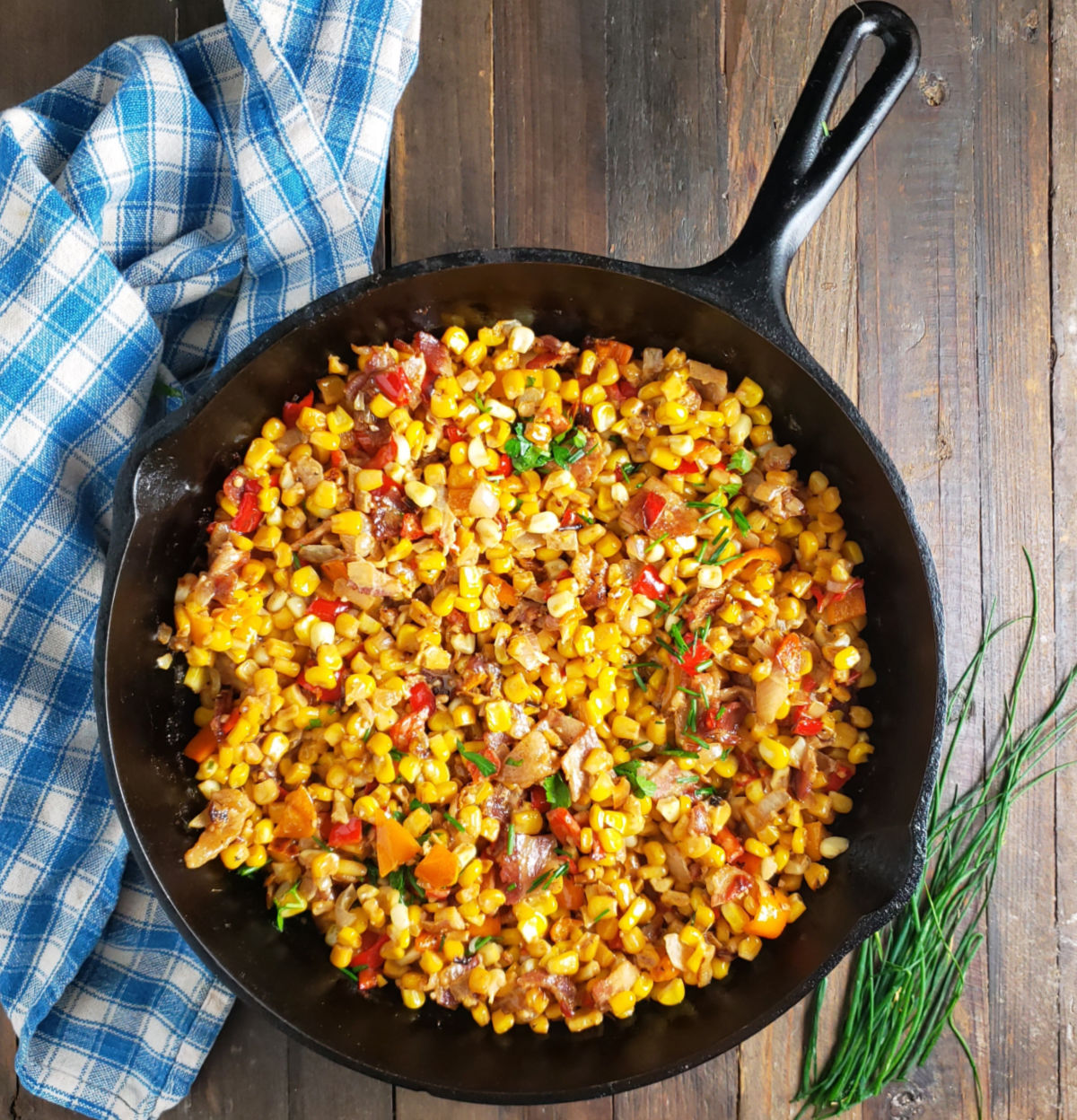 I’m pretty wild about my Quick Corn & Bell Pepper Maque Choux, and I hope you’ll be, too. It’s got to be the perfect end of summer dish; a great transition into the heavier, comfort foods of fall.

If you’re not familiar with Maque Choux, whacha gotta know is that this is my take on it and is divine – keeping in mind I’m a Yankee! Basically, it’s a corn and bell pepper saute but amped up with a little spice and taken to a whole new level with a touch of cream.

Real deal Maque Choux, as least as I’ve had it in New Orleans, tends to be a longer sauteed dish done in one pot. Here, I shortcut the standard longer cooking time by using already cooked corn, which I think is a great way to eliminate the whole standing by at the stove thing or at least being nearby, for long periods of time.

There’s good sweet corn, bell peppers, colored ones, which are a bit sweet, too, onion, garlic, and a little spice and then it’s all brought together with the touch of cream. And of course, I used my own Cajun Spice Blend in this but any brand you like will do.

One more thing. If you’re gonna make this, ya gotta know how to say it! I was a little stumped the first time I heard the name. Just pronounce it as Mock Shoe and you’ll be as close as you can get w/o a Cajun accent. 🙂

Quick Corn & Bell Pepper Maque Choux – when finished the line left from drawing a spoon across the bottom won’t fill in immediately.

First of all, the corn starts cooked, then is sauteed and heated through in the skillet after it’s removed from the cob. So you gotta get that corn. You can drop it in boiling water or if you have an Instant Pot, that’s the way to go. Sweet Corn in the Instant Pot is fabulous and so flavorful – and kudos to not heating up the kitchen! Whatever method you choose, make sure your corn is as fresh as possible!

If you use fresh corn and cook it, you’ll cut if off the cob (try placing it in the center of an angel food cake or bundt pan turned upside down, with a sheet pan under to catch the kernels. Then once clean, scrape the corncob with the back of your knife to remove any “milk” from the corn.

Every cook will have their own spin on this recipe, whether it’s been handed down for generations or one divined in more recent times. For this version, I love to use both bacon (and the drippings) and cream for richness. Don’t cook the bacon until perfectly crispy for this recipe – you’ll want it crispy but still “pliable” so it melds into the final dish.

I do like to cut the onions and the bell peppers on the small side so everything is easy to pick up with a fork. I just think it’s more attractive. Do make sure to give them some good time in the skillet before adding in the corn; you’ll want them more soft than crisp/tender.

And after the cream is added (and you can use anywhere from 1/2 a cup to a cup) do watch it closely. It should all meld together as the cream thickens and coats the corn. If you run a spoon across the bottom of the dish, it should leave a line that doesn’t fill in right away.

When you use Cajun seasoning, you do have to let it cook for a bit or it will leave a raw spice flavor. You can get an idea if you’ve got your perfect amount after you add, but it’s going to be harder to adjust late in the recipe. Since the dish finishes quickly after the cream is added, just be fast about it if you’re going to add more. I gotta give a shout out to my Homemade Cajun Spice Blend in this or any recipe!

As it stands, this recipe has a slight kick but it’s not really spicy at all. It should be perfect for any family dinner and a fabulous compliment to all kinds of Cajun dishes and these spices work well with Barbecue, too. It would be fabulous with my Grilled Blackened Cajun Chicken, btw.

If you do happen to have any leftover Maque Choux, store in an airtight container in the fridge. You’ll need to reheat any recipe like this with cream carefully, especially if microwaving. Reheating too fast can “break” the cream causing it to become greasy.

If you’re looking for another use for any leftover other than just reheating and eating, try tossing some into cornbread or corn muffins.

Actually, this dish could be made a little ahead by cooking the corn earlier (or *gasp* I’m going there) using frozen or a good brand of canned corn. Now canned isn’t something I’d probably normally do, but so many peeps I know have cans of corn they’ve stocked in their pantries in the last year and a half and this recipe would be a great way to disguise any canned taste. I might not be allowed back in Louisiana after that suggestion!

In season and on sale, fresh corn will beat out both frozen and canned in price; it’s a myth that fresh veggies are always more expensive. Do watch the sales. If you need to sub, an average ear of corn is about a cup. A can about 1 1/2 cups and frozen packages always vary in size.

Hey all, I feel I’ve wasted years, make that decades, by not making this recipe before! If you love corn and/or any kind of corn pudding, I bet you’ll love this Quick Corn & Bell Pepper Maque Choux!

I hope you enjoy it and serve it next time you’re feelin’ all extra! Take care, and thanks for stopping by!

Add bacon to a large skillet, turn on the heat to medium and cook, stirring as needed, until fat is rendered and the bacon is just crisp but still a little soft. Remove bacon, set aside, and pour off all but two tablespoons of the drippings. If there aren’t enough drippings to make two tablespoons, add a little oil or butter.

Add the onion and bell pepper to skillet and cook, stirring often until softened, about six to eight minutes. Add the garlic and continue to cook until garlic is fragrant, about a minute longer. Add the corn and heat through. In the meantime, run the back or your knife across the cobs, “milking” them of any of the juices. Add that corn milk to the pan.

Add cream and Cajun seasoning and simmer, stirring occasionally, until the cream thickens and coats the corn, two to three minutes. Add salt and pepper to taste. Toss in the chives and/or parsley or thinly sliced green onion. Serve warm.