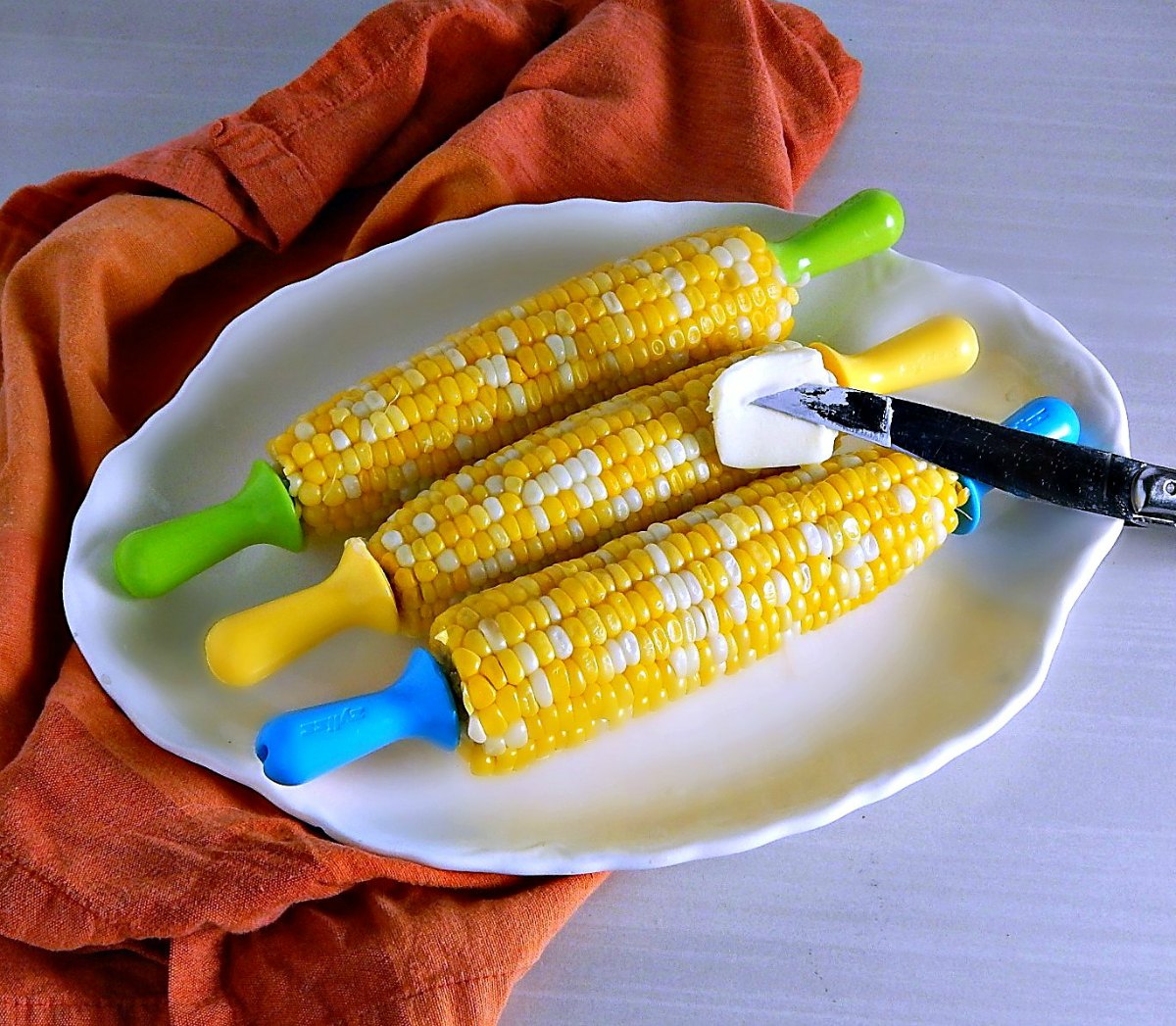 Why would you cook Instant Pot Sweet Corn? Because it really is fantastic. The short cook time and little water keeps all that corn flavor where it should be – in the Sweet Corn itself.

It’s a little scary, sometimes, the no peek method of cooking in the Instant Pot, and that holds true for just about everything, including Sweet Corn. Cooking in the IP is sometimes a leap of faith. But no worries about Instant Pot Sweet Corn. Trust the method and you’ll have the best, easiest, no fuss, no boiling water sweet corn.

I grew up in Northwest Iowa, and I know, I know, Nebraska is the “Cornhusker State” but there’s plenty of corn in Iowa. Lots and lots of corn. But Sweet Corn, when it comes in season is a “thing” not just in Iowa but all over the Midwest (and it’s not in season yet, but soon!) We grow it ourselves, get it from neighbors, pick it from cornfields, buy it at roadside stands. We pick it up at farmer’s markets and from huge cardboard boxes at the store.

We boil our Sweet Corn, usually in salted water, but that can be changed up sometimes and some people have secrets. A little sugar, vinegar or maybe milk, but most of us think that’s an abomination. We steam our Sweet Corn, too and we grill it all kinds of different ways. At the fairs, we buy it. The vendor will peel back the husk, dip it in a vat of butter (we like to believe it’s butter, anyway) and hand it over. It’s like the first “food on a stick.”

But most of all, we cook it at home, aiming for the freshest corn and the simplest method, knowing that time is of the essence. The sweet sugars in the corn diminish every minute after that corn is picked, turning to starch. Which isn’t to say it isn’t good, it’s just not quite the same. That simple, classic method is to just bring a big vat of salted water to a boil and drop in the corn. The IP does the same job but the corn is even better! The sweet corn is magically plump, gorgeous and full of corn flavor. Even my rather skimpy, came from who knows where, out of season corn was delish when made in the Instant Pot.

Instant Pot Corn on the Cob

There isn’t anything to making Instant Pot Sweet Corn. Add a cup of water to the IP, put in the rack that came with the Instant Pot, fill it with corn and set to 1 minute. Two if you like your corn softer. That’s it. Do a quick release, but even if the corn stays in the IP for a few minutes, there’s no damage done. By the way, if you are cooking a lot of corn in the IP rather than just a few ears, don’t increase the timing to compensate. The cooking time in the Instant Pot is counter-intuitive. More corn doesn’t mean more time.

There’s nothing worse than ruining good corn by overcooking, and that was a worry for me since the corn can’t be checked as it cooks. The first few times I made Instant Pot Sweet Corn, I was right there, waiting for the IP to beep it was done. Then I got lazy. Or distracted, or wandered off, as I’m prone to do. And I didn’t catch the beeper (I’m pretty deaf) and when I opened the pot several minutes after it was done, cringing at what I thought was going to be a disaster, I found the Sweet Corn was just fine. Perfectly fine, in fact.

And all my worries about cooking Sweet Corn, which usually requires a big vat of boiling water, split-second timing and the hot, steamy removal of said Sweet Corn, in the Instant Pot evaporated. Better tasting corn, beautifully cooked with no mess, no hassle and no dealing with huge pots of boiling water? I’m all over it! I may be cooking my Sweet Corn on the grill this summer, but for my Classic Sweet Corn? It’s the IP for me!

You’ll get your best prices on Sweet Corn at the grocery when it’s in season and/or a holiday week. Look for the five (or four) for a dollar specials. If you want, you can shuck your corn at the store for less mess, but those that know corn know you pick it the day you use it, never refrigerate it (unless you’re not going to eat it right away – which you should never admit to) and husk it right before cooking. And you don’t open it before you buy it – that’s for rank amateurs. Look for fresh silk at the top and inspect the husk for small holes or breaches.

Press along the top of the ear and you’ll be able to tell if the cob has beautiful, full kernels. Try it on another portion of the ear to see what it feels like. Then look for the “nod.” That nod you get, that little signal of respect, from others in the know that signifies that you’re a sweet corn badass as you toss your corn in the cart, and back away from the crowd. And leave…corn intact and that husk protecting the delicate, sweet kernels.

So we all know that corn on the cob, freshly cooked, slathered with butter is nothing short of heavenly, but that leftover Sweet Corn is nothing to be desired. When I was with the folks, Pat would inevitably toss any sweet corn that wasn’t eaten, even when I cooked a little extra to refashion in the next couple of days! It seemed to be a point of pride for her. There’s no need to do that, and I might even convince you to cook a little extra with my post on 25 Ways to Use Leftover Corn.

When time is up, release pressure manually, remove corn and serve with salt and pepper and butter.