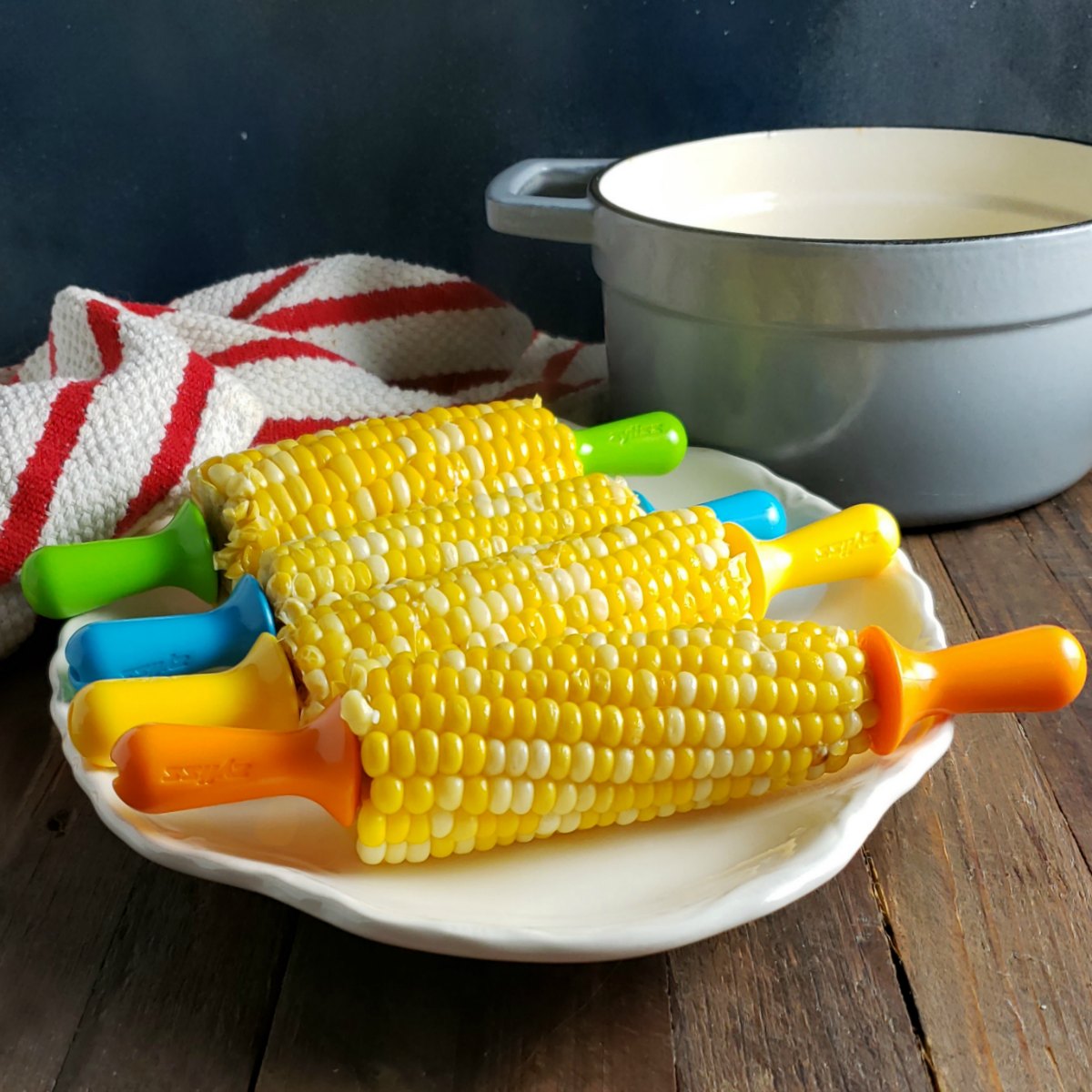 I gotta tell you guys sumpin. See, I live in Minnesota but grew up in Iowa. So I know corn! But what are you gonna do when you *need* corn and you can’t wait for those magical days in late summer to get your fix? Maybe you want corn and you can’t get that perfect ins season corn? Maybe the corn you have isn’t quite at its peak or you left it to sit just a bit too long? Or the packages of corn you bought didn’t quite live up to expectations? That’s when a recipe like this Sweet Corn in Milk & Butter is going to shine!

I gotta tell ya I can be a food snob sometimes (all ya hafta to do to get that is read my site) if I can afford to be that is! One thing that’s always affordable is just picked in-season sweet corn. And I  wait every year for it, make it how I was taught, lightly simmered to perfection, coated with butter and seasoned with salt. Boom. Mic drop. There is nothing better!

About Sweet Corn in Milk & Butter:

But even a corn snob can live and learn and curiosity got the better of me…I’ve seen this method around for a while, sometimes called Butter Bath Corn. The corn is cooked in a mx of milk, a touch of sugar and salt, and a little (or a lot) of butter.  And I’m always seeing those little packets of sweet corn at the store, these days pretty much all year round. I wondered could this method transform those packets of corn into something even I, admitted corn snob, would eat?

The short answer? YES, happily. Now that being said, this sweet corn in milk and butter is a corn “dish” if that makes sense, just like creamed corn or corn chowder is a corn dish. The corn is definitely flavored and enhanced and the texture is different than when sweet corn is simmered in a big pot of water. I also did a side by side comparison with the same corn just simmered in water…wow, what a difference!

I’ve tried a few different ratios of the ingredients when making Sweet Corn in Milk and Butter. I wanted to find the corner where practical and budget worthy met delicious! I didn’t want to go cray cray and make this super expensive (there was no way a stick of butter was going in!) but I wanted just the right amount of milk and just enough butter to coat and cling to the corn when it was pulled from the pot. As corn sits in storage or at home, the sugars in it gradually turn to starch. Just a hint of sugar brings that sweetness back. And of course, ya gotta have salt! I think I got there but feel free to fiddle.

By the way, if you’re curious about the plate below, this sweet corn was the perfect side for my Sweet & Spicy Cajun Spare Ribs and the other item is my Bacon Ranch Potato Salad. Now that’s a perfect summer meal!

First things first. When you prepare the corn, make sure you get every little bit of silk off it that you possibly can…the milk mixture coagulates on any fine tendrils left behind and it’s NOT attractive! You’ll end up doing triage after the corn is done trying to remove those from that hot hot corn. Not much fun. There is such a thing as a corn brush and if you eat a lot of sweet corn, it’s worth a couple of bucks but almost any small brush will do and your budget option is a cheap (preferably unused, rite?) toothbrush.

I’m not going to give you set measurements because the size, shape, and amount of corn you are making are gonna vary, and so, probably is the size and shape of your pan. Here’s what worked for me and I used the smallest pot I had that the corn I used would fit in and still give me plenty of room at the top to prevent a boil-over, just to minimize the ingredients I would use.

Prepare (if using a packaged corn, cut the ends off to get rid of any dried out corn on the edges, if using a whole cob, trim and cut in half so it will fit in tighter) place in the bottom of a pot, add milk half up the corn. Top with water. You’ll need to push the corn down a little if it floats to judge how much water you need. Add about two teaspoons of sugar, a teaspoon of salt, and about 2 tablespoons of butter. The butter helps to keep the foaming down. Bring to a simmer, partially cover and simmer for 6 to 15 minutes until the corn is to your desired tenderness, stirring now and then.

When finished, there should be a slick of butter across the top and if there isn’t add just a little more. Give each cob of corn a little shake in the liquid to remove any strings of milk proteins then bring it up through the butter, coating the cob. Serve immediately. You can add more butter, but I think you’ll agree it’s good to go once you taste it.

It was interesting that the corn took a bit longer to get tender in the milk mixture (anyone out there a food scientist?) than the corn I made in the side by side comparison. The corn that wasn’t eaten immediately took on shriveled appearance quicker, too. It still tasted just as good.

What to do with that Milk, Butter Mixture:

I was a little wowed at how good that milky mixture tasted and just how much corn flavor it had picked up. I just made an informal chowder for a couple of quick bowls of soup and had it for lunch the next day. I heated the mixture up, added a diced up potato, cut off the corn I had leftover (or you could just dump in some frozen or canned corn if you have no leftover) and simmered it. Lots of pepper and I basically had another meal. I didn’t take a pic.

I didn’t have a lot of liquid, so I didn’t want to put a huge effort into my little chowder, but I do have two “formal” recipes for corn chowder on my site if you want to have a recipe as some guidance. You can go fancier than I did and add a little cream or scrape the cobs or put as much (or as little) effort into your chowder as you want. Here’s my End of Summer Chowder and my Potato Corn Chowder.

You’re not limited to standard corn chowder. You could take the flavors easily to the Southwest by adding some poblano or canned green chilis, maybe a little Chipotle pepper in adobo, garnish with a little Feta or Cojita cheese if you’d like. If you’re interested in making something like grits or a spoonbread, corn risotto or any other recipe that could benefit from a little corn flavor, the liquid could be used in those recipes.

I think we’ve been told so often that frozen and/or canned vegetables cost less than fresh that we believe it. There’s no doubt that frozen/canned veggies are easier to prepare and there’s no waste, but generally, if you buy in-season veggies, you’re going to win with fresh. The comparisons aren’t always easy and straightforward, which adds to the confusion. With corn, an ear can vary in size and can be bought fresh by the ear or bought like my corn was, in a little packet of four halves.

As I’m writing this, it’s June of 2020 and I’m not in the stores making price comparisons.  Luckily my corn was at the lower end of the price scale but there’s no doubt when I crunched the numbers, even I was surprised! I just “had” to have it, and paid the price! I hope you’ve enjoyed this post and if you try this method, I’d love to hear what you think.

Add corn to pot. Add milk to level 1/2 way up the corn. Top with water. Add sugar, salt, and butter. Suggested amounts, for about 4 corn cobs, use 2 teaspoons of sugar, 1 teaspoon salt and 2 tablespoons butter.

Bring mixture to a good simmer, turn down and partially cover. Cook to desired doneness, stirring now and then. Remove, shaking the corn with tongs first to knock off any milk proteins, then bringing the ear of corn up through the butter to coat.

Note: Increase as necessary. If the butter hasn’t slicked on the surface, add a little more.

Keywords: Corn, milk, Side, Vegetable Side