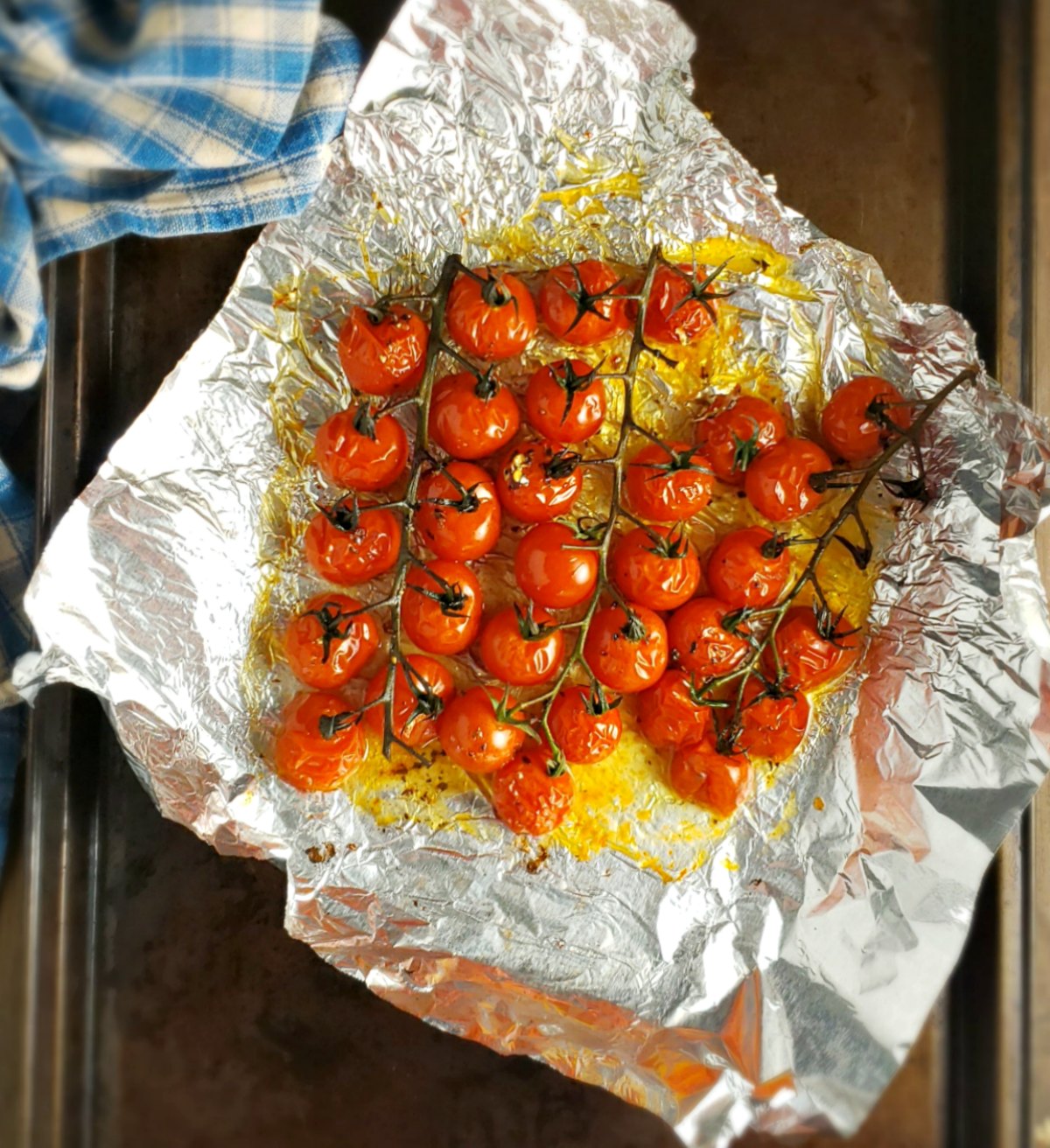 We’re sitting here in the Twin Cities just waiting to get slammed by a blizzard, and we’re not alone. There’s a whole swath across the upper Midwest. I keep checking the weather but it’s so bright and sunny it’s easy to be in denial. Maybe they’re exaggerating. Maybe we’ll get missed! One thing I do know? We’re having these Oven Roasted Cherry Tomatoes & they’re like a breath of sunshine no matter what the weather and what the time of year.

Oven roasting is a sure way to take almost any vegetable to a whole new flavor level with a minimum of time and effort, and these little baby tomatoes are no exception. Even out of season, cherry tomatoes are usually a good bet at the store but drizzle a little olive oil over them, sprinkle with a few herbs & a little garlic and you have bright little flavor bombs.

How to Use Oven Roasted Cherry Tomatoes:

I used these tomatoes to make a quick little appetizer; they’re fabulous when plopped onto a little crostini that’s been spread with a little ricotta or cream cheese. Take it one step further and when they’re all assembled, drizzle them lightly with any juices left behind from the roasting.

Now you’ve got a classic appetizer that’s gonna be right at home at just about any function from a game day or office potluck to a shower, a wedding or dinner party to the fanciest cocktail party or soiree. I’m thinking of the upcoming Grammy Awards & the Superbowl but hey, I gotta say I loved them dropped in the Easy Tomato Ravioli Soup I made the other day. Since I don’t have a fancy soiree coming up. ): But I do have a recipe for my soup, coming up tomorrow, so stay tuned.

There’s no need to stop there once you have Oven Roasted Cherry Tomatoes. They’re an appetizer, a condiment, an ingredient and/or a side. Toss them in a Panzanella Salad, like my Updated Panzanella instead of regular old tomatoes. Toss them, with the roasting juices, with pasta for a simple, fresh dinner or maybe upgrade a pasta dish like my Tuna, Tomatoes & Artichokes. Serve them over hummus or risotto for a meatless meal. They’ll take your average grilled cheese, BLT or just about any sandwich to the next level. Or just place a few on the side of your plate of just about anything, for a gorgeous side.

Roasting your Cherry Tomatoes is ridiculously fast and easy. Toss the tomatoes on a foil-lined sheet tray for easy cleanup and to capture the juices. Just turn up the edges of the foil around the tomatoes to contain those juices. Drizzle them with a little olive oil but don’t overdo it; we’re looking for intensity in flavor. There’s no need to actually measure but about a tablespoon for a package of tomatoes is about right.

Then immediately before all the olive oil rolls off, sprinkle with herbs (I like to use dried herbs for their intensity of flavor and I like to use my Homemade Italian Seasoning – that stuff is magic) and pop them in the oven. You can use your favorite herbs, a blend or just one or two, like rosemary, basil or tarragon. Add a sprinkle of salt if you wish.

Watch them closely at the end. It’s best if they are just releasing their juices and not collapsing if you want to use them on crostini like I did, although they’re just as good spread on crostini if roasted longer. I just think they look more dramatic when they’re still holding some shape, the flavor is incredible with the juicy tomato and I like that one plump cherry tomato can go on each little toast. If they’re all collapsed, just one little tomato will look a little chintzy, so it helps maximize my budget to not over roast.

How to Make the Cherry Tomato Crostini:

To make the crostini, use store-bought or make your own. Slice your bread, in this case, I opted for a baguette for small, cute crostini, about 3/8ths of an inch thick, at an angle. Spread them out on a large sheet tray or two, lightly brush with olive oil, sprinkle with salt (you can use herbs if you’d like) and roast them in the oven at 450 degrees F. for several minutes until lightly golden brown. Turn over and repeat.

Ovens vary in temperature so roasting time varies. I find about six minutes does the trick on the first side, three or four on the second. Turn the trays in the oven if they aren’t roasting perfectly evenly, and watch them towards the end of the cooking time. Depending on how many you’re making, the crostini can be roasted right along with the tomatoes. They can also be made ahead and should keep for a week or two with no issues if they’re perfectly dry and crunchy throughout, once cooled, in a sealed plastic bag.

There will be about 30 to 32 tomatoes in a carton, my bread gave me about 35 slices so I picked the best ones, and it took about 3 ounces of cheese to put a conservative schmear on each little toast. Do that after the crostini have cooled, although the tomatoes can go on while still warm or when cool.

If a tomato is still firm and hasn’t released any juice, before adding to the crostini, take a knife and pierce the bottom; that’s going to prevent it from “spurting” when someone takes a bite of it. Then just sprinkle the juices, there won’t be a lot (and you shouldn’t use a lot because they’ll be messy and hard to eat) but they’ll be intense, over the finished crostini. Finish with a few herbs, I used chives but thin ribbons of basil will work although you’ll want to make sure they stick to each crostini which is fussy.

This is quick and easy as it, but there are always ways to turn things out faster; the downside is that it’s almost always a little more money to work with some convenience products.

Talk about an easy, fabulous and fairly inexpensive appetizer! The price, of course, is dependent on the price of the ingredients.

Oven Roasted Cherry Tomatoes just out of the oven.

Add the Cherry Tomatoes, turn up the foil around the perimeter of the tomatoes. Drizzle with olive oil, sprinkle with herbs and salt as desired.

Roast until tomatoes are blistered, soft and juicy, about 15 to 20 minutes.

I’ll be sharing at Fiesta Friday #311, co-hosted this week by Zeba @ Food For The Soul and at the Weekend Potluck at South Your Mouth.