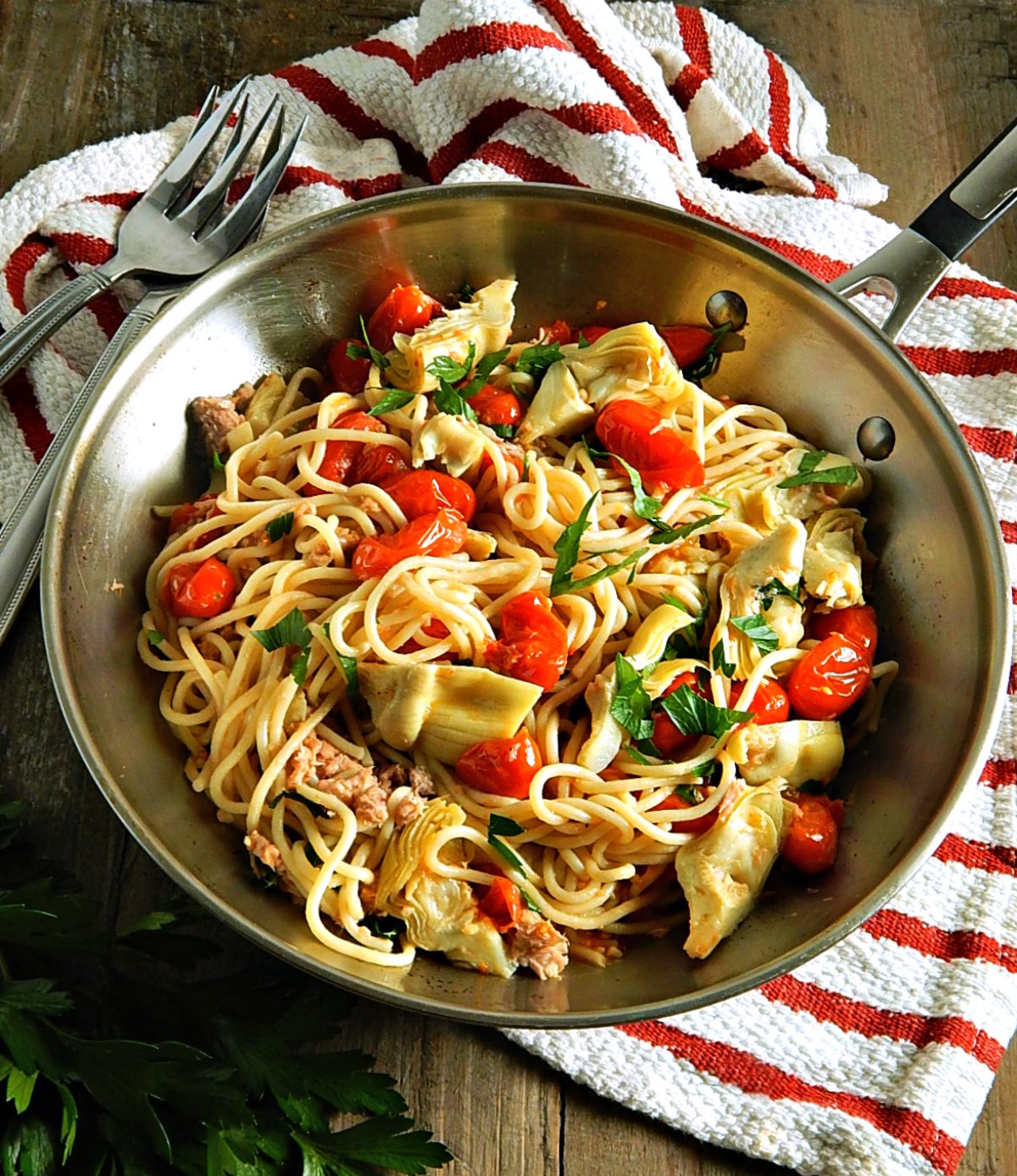 When the temperatures are soaring and the tomatoes are coming in like crazy, either from your garden or maybe they’re just plentiful and delicious at the store, it’s nice to have a no-brainer, easy, no heat up the kitchen meal. Like Pasta with Tuna, Tomatoes, Artichokes.

Even better, Pasta with Tuna, Tomatoes, Artichokes can be served hot as soon as it’s made or served at room temperature as almost a kind of healthy, protein-packed “salad.” Can spaghetti be a salad? Well, this one can! And bonus that you can make it earlier in the day when it’s bound to be cooler and then pull it out for dinner. Leftovers are great, too, chilled, the next day.

About Pasta with Tuna, Tomatoes, Artichokes:

I always love a good spaghetti dish, but honestly, I’m kind of over spaghetti with red sauces. I know I have a few on my site here but I’m kind of old and after years of serving my kids spaghetti (oh my gosh my kids loved it!) I’m always looking for pasta dishes that are a little different, a little new to me, at least. And while Pasta with Tuna, Tomatoes, Artichokes is a classic, it really fits that bill.

It’s nice, too, that everything in the Pasta with Tuna, Tomatoes & Artichokes are all things that so many people are familiar with, just combined in a new way. That makes it pretty family friendly. I do seem to remember that Kraig, my son, wasn’t wild about artichokes (but my cat is, Homer loves them – go figure) but that just meant more for me, lol! So when the kids (all grown up now) were looking for something easy, fast & cheap, and I had plenty of tomatoes, I thought it was the perfect time to post this.

And speaking of fast, If you use angel hair pasta, you can have dinner on the table in about 15 minutes. There’s nothing to making this recipe! The hardest part is waiting for the water to boil, it’s that easy. And while the water is boiling and the pasta is cooking, toss your cherry tomatoes in a big skillet with the oil, garlic and basil and open and drain your tuna and artichokes. As soon as that spaghetti is ready, toss that hot spaghetti into your skillet and then in goes the tuna and artichokes. Easy, peasy.

There are a zillion ways to vary this recipe and change things up if you want. Sans tuna, it is a fantastic vegetarian dinner. Pasta with Tuna, Tomatoes, Artichokes can easily be taken in a different direction by tossing thinly sliced or ribboned zucchini or summer squash into the tomatoes. While these vegetables are sautéed, the same recipe can be made with oven roasted veggies added in to warm through. Maybe even leftover ones! Bonus for a way to use them up if they are in your fridge.

Personally, I don’t think you could go wrong with a few briny olives, and a bit of white or red wine vinegar passed at the table adds a bit of brightness. And while I’m thinking about Pasta with Tuna, Tomatoes, Artichokes and all the ways to complicate it up (lol) it made me think of an even simpler, but similar recipe. That’s my Pan Roasted Cherry Tomatoes. They can be made up and tossed with pasta, too.

There is no sense in paying full price for pasta or any of the ingredients in this recipe when you can pick them up on sale. And if you’re a couponer, there will be coupons for both pasta and tuna. Probably not for the artichoke hearts, though. Look for them on sale, often unadvertised, around holidays and check your discount shelf or bins if your store has them.

Tuna is best bought during Lent when the prices are lowest and Tuna is aggressively marketed. There are usually a few great sales just before Christmas, too, usually during Advent. Since both Lent and Advent are periods of religious observation, you’ll never see the sales on Tuna and other fish advertised as such, and if you’re not familiar with either Lent or Advent, the sales might just pass you by without you ever knowing that they are a recurring annual event. Stock up for the year because the canned fish is often half or more off.

There’s no doubt that Cherry Tomatoes are pricier than regular old tomatoes, but these days they’re usually packaged and you’ll find them by brand. So yeah, there are coupons, sometimes for a dollar off. If you have a coupn matching site, they’ll alert you to sales and coupons or if you know the brand of tomatoes (in our area it’s often Del Monte) check the producer’s web site.

Bring a large pot of salted water to a boil over high heat. Add the salt and pasta and cook until tender but still firm to the bite, stirring occasionally, about 8 to 10 minutes. Drain and reserve about 1 cup of the pasta water.

In a 12 t0 14-inch skillet, heat 1/4 cup oil over medium-high heat. Add the onion and cook, stirring frequently, until soft, about 5 minutes. Add the garlic and cook for 30 seconds. Add the cherry tomatoes and basil, if using dry. Add the basil at the end if using fresh basil. Cook, stirring occasionally until the tomatoes begin to soften, about 4 to 5 minutes.

Drain the pasta, reserving about a cup of the cooking water. Add the pasta, the tuna, artichokes, and the parsley, along with the basil if using fresh. Toss until all the ingredients are coated, adding a little pasta water, if needed, to thicken the sauce. It should be creamy. Season with salt and pepper to taste.

Transfer to a serving bowl and serve warm or at room temperature. Pass red or white wine vinegar as desired.

Easily Cut Cherry Tomatoes, Grapes, Olives, Etc. Simply place the lid of a yogurt, sour cream container, etc. upside down (lip up) on the counter, fill with whatever round objects you want to cut, place another lid lip down, press gently but firmly and slice horizontally through the center.

How much and what kind of Tuna is safe to eat? Check out this handy calculator by Colin Dunn of Planet Green. Hint: light tuna has much lower levels of mercury than Albacore.