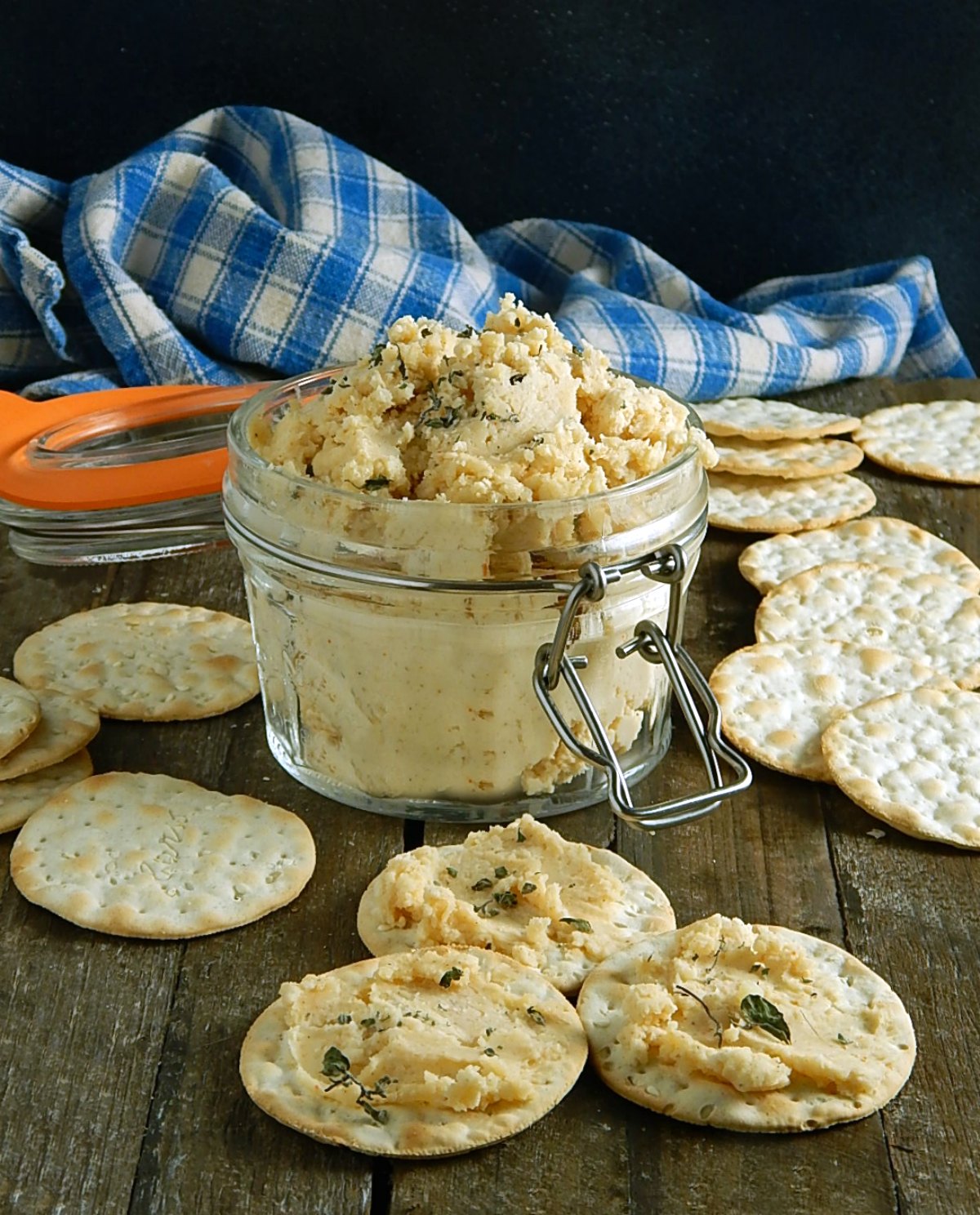 I have good news today. See, some of you know I’ve been having some trouble with my joints; typing, while still slow and has to be done just a little at a time is easier and I’m trying to use the voice options on my computer. And cooking has been challenging, but I’m really trying to focus on fun & easy (and lightweight) food. And the best news? I made Old English Potted Cheese and it’s a super easy cheese spread and just to die for.

I have been wanting to make Old English Potted Cheese since I came across it on The Guardian and I gotta say I’m glad I took the plunge and “gotter done.” It might seem strange but what first drew me was the word “potted.” It’s just so quaint sounding and makes me think of ye olde English pub tucked away in a small village. Well, something potted is a spread, in this case, it’s a mixture of cheeses, and it’s going to be just as at home at your house as in a pub, perfect for just about any occasion from a romantic dinner (Valentine’s Day is coming up) to party to a game day.

What we have here is a pretty amazing Cheese Spread that’s packed with flavor. And while there’s a whole host of English cheeses recommended (many are available at my larger grocery store) I made mine with white Cheddar. A little butter smooths everything out and then there are just a few little touches of spice, a little fortified wine (aka Sherry at my house) and the obligatory splash of Worcestershire.

This Potted Cheese is going to be great spread on crusty bread, crostini, crackers, or maybe served with slices of apple and/or pears. Actually, it will be great on just about anything you want to spread it on. It can be served as is or if you want, it can be toasted in the oven until melty and crusty and served warm.

There’s a lot of information out there about Potted Cheese, especially for something so simple as a bit of cheese whirred up in the food processor! People are passionate about it for good reason, beyond that it’s been traced back to the 18th century! It’s just so freakin’ fantastic! I chose to work off a traditional recipe from Jane Grigson, a renowned English cookbook author and consulted one of my fave blogs, British Food in America. If you’re a food nerd, that’s a fun read with lots of hints and variations and recommendations.

I already gave away the secret to making Old English Potted Cheese. Whir it in a food processor. Grate the cheese and then pulse into the smallest bits before you add the butter and the rest of the ingredients. Make sure the butter is at the right temperature. If your cat has been camped out on your kitchen floor register blocking all the heat (because it got down to 36 degrees below last week and she’s figured out how to stay warm) and you walk in to find your kitchen is frigid, pop your butter in the microwave for just seconds. The butter should bend but still hold its shape so it blends well. It shouldn’t be too warm, either, or it might seem a bit oily in the final product.

Today, I went absolutely classic; the only changes I made in the recipe was to use a Vermont white Cheddar and a little allspice instead of the mace; I don’t usually cook with mace so I don’t have it on hand, so I’m betting most people don’t. I’d def include the allspice, though – it’s like a little magical touch.

There are so many ways to vary the recipe. Different cheeses (and potted cheese is often made with bits of this and that, kind of like this recipe for Fromage Fort), different alcohols (some are suggested in the recipe) you could add just about anything you’d like. Wine, whiskey, bourbon, even beer as long as it will complement the cheese. Think about add-ins, like roasted garlic, caramelized onions or shallots. I even thought a smidge of horseradish or maybe a splash of hot sauce would be great in this and an herb or two can set it off. Maybe thyme, marjoram (there’s a touch of marjoram sprinkled on the cheese in my pics) or rosemary if you’re into it. Really, it’s hard to go wrong. And it has to be said because I’m an American: why not some bacon?!

You’re probably going to want a good cheese for this recipe, and there are several kinds of English cheese listed in the recipe if that’s in your budget. I kind of splurged on a Vermont Cheddar and the flavor of the spread is incredible. It wasn’t cheap but it was worth every penny. It also came out to be a lot less than any old grocery store prepackaged carton of Kaukauna (and made more) or a purchased cheeseball. I’m justifying, I know. And when Kraig (my son) was by, raiding the fridge, I gave him a dire warning not to touch that cheese! He’d eat cheese by the block when he was a kid and still will!

I picked my cheese up at Costco, and my final price for the cup and a half or so of my Old English Potted Cheese was around $5.50 so it’s not like this is an outrageous price for an appetizer. If the price is not an object go as fancy as you’d like and just so ya know, even a grocery store Cheddar (shop well, buy it on sale; it’s always on special so stock up) will be fantastic once it has a bit of Sherry or other alcohol of choice and the spices dumped in. If you want your Potted cheese to go further at a party, spread it on crostini or toast or crackers on trays ahead rather than putting it out for everyone to help themselves.

Just like Fromage Fort, Old English Potted Cheese can be made with bits and pieces of whatever you have hanging out in the fridge. Hard cheese, soft cheese (you may need a bit less butter if you use mostly soft) or anything in between is gonna be great. We Americans tend to like a little cream cheese in our spreads – that is one “cheese” that’s going to dull the flavors so resist the impulse.

As Jane Grigson said (quoted in British Food in America) “I make the most outrageous mixtures, cutting them up (bits of cheese) and reducing them to crumbs…then adding the butter, some Amontillado sherry and plenty of coarsely ground black pepper.” and to paraphrase this produces “a far more rewarding “result than any cook deserves. The thing is to keep tasting, then add alcohol and seasonings accordingly.”

Cheese should be finely grated; if not, add to food processor and pulse well. Add the butter and process well into a paste. Add alcohol of choice and the mustard powder, cayenne, and ground mace, along with the splash of Worcestershire, if using. Pulse to combine, scrape down and continue to process until smooth and well combined. If possible, refrigerate for at least 24 hours before eating, to allow the flavors to combine.

Bring to room temperature before serving or it may be hard and crumbly. Delicious served spread on toasts or broiled on toast or with a good biscuit such as a Digestive or an oatcake.

I’ll be sharing Old English Potted Cheese at Fiesta Friday #262, co-hosted this week by Jhuls @ The Not So Creative Cook and Angie of Fiesta Friday.