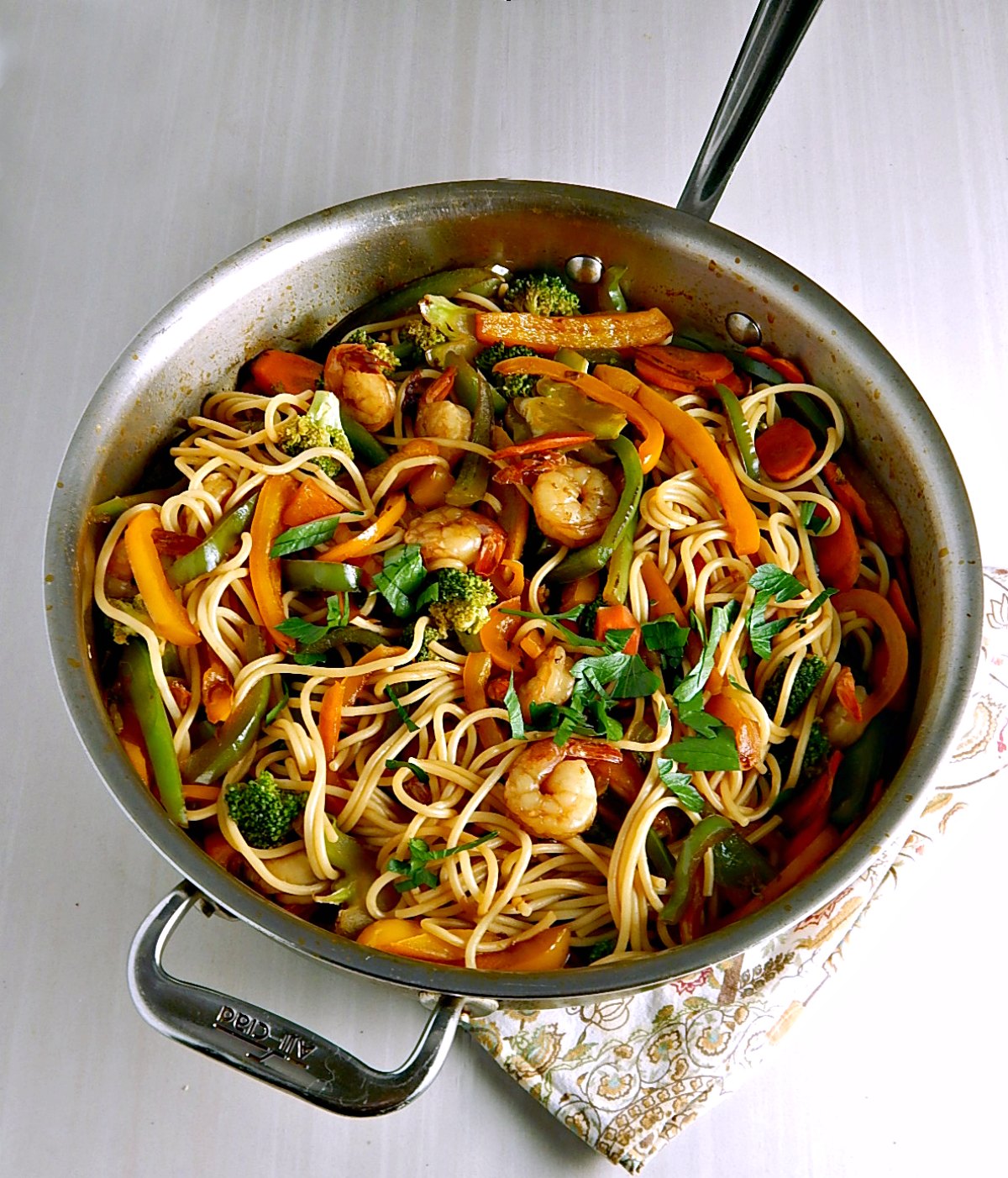 I made this Easy Fast Shrimp Lo Mein awhile back and am just now getting around to sharing it. And I already want it again! Are you a Lo Mein fan? This is the recipe that’s going to have you getting your Lo Mein at home any time the craving hits.

While I made my Easy Fast Shrimp Lo Mein with Shrimp (obvs) and broccoli, bell pepper & matchstick carrots, you’re not limited to that combo. The sauce for this Lo Mein is so scrumptious, you can use it if you want to make any Lo Mein, steak maybe or chicken and any veggies you like using this same sauce.

Lo Mein really is all about the sauce, and this one’s like magic. So simple and so delish! It’s just the perfect thing to coat those noodles and transform those veggies into deliciousness. Easy Shrimp Lo Mein is a great recipe to serve to the fam when you’re trying to get them to eat more veggies. They might go for the shrimp and the noodles first, but then they’re bound to at least accidentally get a few of those veggies tangled in those lovely noodles and they’re going to get how delicious they are.

Real Cantonese Lo Mein is a bit different than our typical restaurant style Lo Meins like this Easy Fast Shrimp Lo Mein, but there’s hardly a better dish to introduce your family and friends to Cantonese food than this one. Some say Lo Mein is one of the most popular Chinese Take Out dishes. I know my folks went nuts over a variation I made for them a while ago.

When you get ready to make this recipe, start with the noodles (and I’ve gotta mention, this is a great recipe to use if you have leftover spaghetti noodles in the fridge – then it’s even faster!) and by the time they’re done, you’ll have everything else ready to go. You’ll want to make the veggies and shrimp in a large pan so you have enough room to toss the noodles in with everything else, and you’ll want to make sure your noodles are just shy of al dente. They’re going to cook for that last minute in the sauce so they’ll absorb that yumminess!

And of course, just a note, don’t overcook your veggies at the start (or your shrimp) because they’ll keep cooking as the noodles are tossed in. Choose any veggies you like. I picked the broccoli, peppers, and carrots because they’re so common in Lo Mein and everyone I know loves them, but other good candidates are cabbage, mushrooms, snow peas, Chinese broccoli, greens, scallions, bamboo shoots, and water chestnuts.

For the noodles, yes, you can use Lo Mein noodles, either fresh from the refrigerator section or dried. I just used spaghetti because when I decided to make my Easy Fast Shrimp Lo Mein that’s what I had in the cupboard. And that just shows how easy and forgiving Lo Mein is. Just decide to make it and raid the fridge and pantry and whip it up. That sauce is just like a blank palette for you to add what you love and/or have on hand.

Unless you live near an Asian market, even if you have Lo Mein noodles available, they’re likely to be a bit pricey in comparison to most other kinds of pasta. For some of you, I know that’s not a biggie and isn’t likely to break the bank, but if you’re looking for an easy, readily available option, spaghetti or even better, linguini works great in any Lo Mein.

My Easy Fast Shrimp Lo Mein is mostly veggies with just a little shrimp to accent the recipe. That’s actually a great way to stretch any recipe and it makes just about any recipe healthier. I buy my shrimp strategically and since I’m in Minnesota, frozen is the best option. I pick it up at a low during Lent, and I check around the Christmas and New Year’s sales, too. By then, even though I tend to use shrimp sparingly, my Lent supply is running low or gone, and you don’t want to keep shrimp too long in the freezer. Safety wise, it’s just fine, but it can get dried and the quality might not be as good after several months. If time allows, I thaw the frozen shrimp overnight on a layer or two paper towel, loosely covered.

As you know, some veggies can be a lot more than others. Not only are the veggies in my Easy Fast Shrimp Lo Mein basic, common veggies available almost everywhere, but they’re also pretty inexpensive. Broccoli might go on sale in your area. Bell peppers do go on sale where I live. Generally, the red, yellow & orange peppers run twice as much as the green bells, so choose accordingly…I like to buy my peppers on sale, enough for the current week when they’re on sale and enough to use the following week. They keep pretty well for a week or two.

Drizzle a large skillet with oil. Over medium-high heat, add the broccoli stems and carrots, cook for about 2 minutes. Add the bell peppers and broccoli florets and cook for three to four minutes; they should still be a little crunchy. Make a space in the center and add shrimp, cook two minutes or so, then flip shrimp over.

Add the sauce and bring to a simmer, cooking until the sauce has slightly reduced and shrimp is just cooked through. Remove skillet from heat and add noodles, tossing and turning over to incorporate the shrimp and vegetables and coat the noodles with the sauce.

Note: If the stove isn’t hot enough while stir-frying vegetables, add lid for a minute or two.