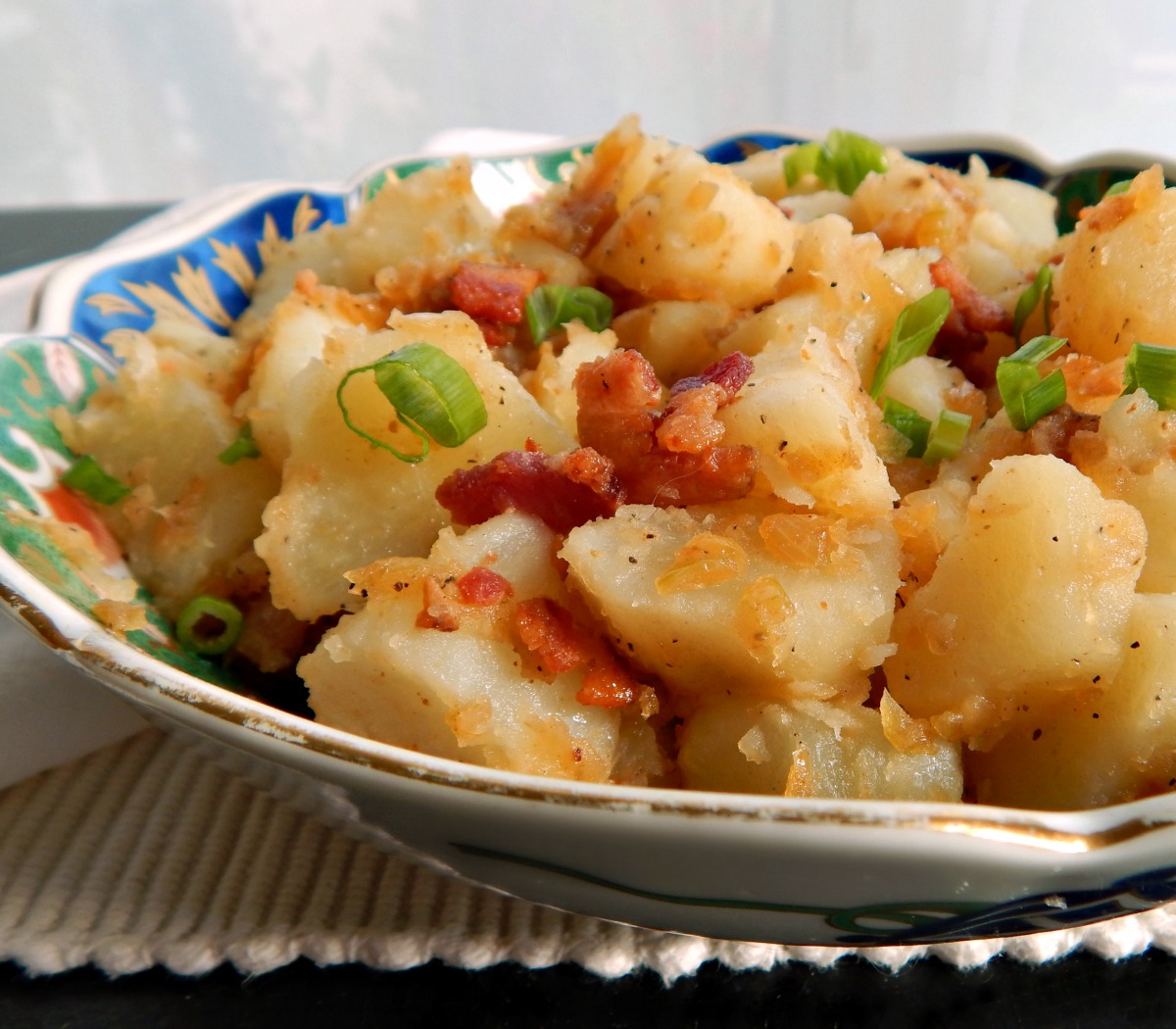 Have you ever had a really good homemade German Potato Salad? Even if you haven’t, you might have seen it at the store, maybe at the deli, and possibly depending on where you live, in a can!  If you’ve tried any of those products (no offense to whoever is making them) you might not really “get” what German Potato Salad is. It really has to be homemade to be good.

German Potato Salad is a potato salad like none other. It’s tender chunks of potatoes coated with a gorgeous vinaigrette. It’s just a little tart from the vinegar, rich with bacon and absolutely delicious. It’s a mind-blowing combination of flavors that’s gonna induce cravings. Seriously, after you taste this, you’re gonna want it all the time. I mean, how could you not with these ingredients?

I remember my Mom making German Potato Salad now and then; her Mom was Irish but her Dad was 1st generation German, but it wasn’t really a regular thing in our house. I imagine my little Irish Grandma (she was 4′ 10″) tried to pick up recipes that my Grandpa Herman would like; that must have been hard on her, back in the day, because out of the seven boys in my Grandpa’s family, I think he’s the only one who took a bride that wasn’t descended from someone of German ancestry, or at least from a country that was close by Germany.

Even so, I paid pretty close attention when Mom did make it (I usually did if I loved something) and sampled it whenever I could, church suppers, potlucks, etc. I think it fell out of fashion though, in the years all of America seemed to become fat phobic! And when I’ve made German Potato Salad, I never used an actual recipe, just cobbled it together from memory, but all that changes this year. I want something more formal to pass on to my kids and to pass on to you.

One thing about German Potato Salad, besides that it’s pretty quick to make, it doesn’t have to be chilled, so it’s kind of a cheat when getting dinner on the table. It also doesn’t have as many food safety issues if you’re toting it to a picnic or potluck or maybe a tailgate as some of the mayo potato salads do. It’s fabulous warm, fantastic at room temperature even good cold from the fridge, although that last might just be me! And speaking of tailgates, especially here in the Midwest where we serve so many things like brats and dogs…this salad is the perfect accompaniment! Yeah, impress all your buds with this. They’ll be clamoring for it every time.

The recipe is super easy; really the key point is one I picked up from my Mom and recently saw in a Cook’s Illustrated recipe for potato salad, too. Sprinkle the potatoes while still warm with the vinegar. They pick that bit of flavor up and for such a simple little touch, it makes such a difference in the finished recipe.

There are a lot of recipes for German Potato Salad that call for flour; I think you’ll find it unnecessary after you taste this. Just keep it simple, keep it fresh and it’s going to be a gorgeous thing. Other recipes use a little celery; I think it’s good with the celery, too, just add a stalk, finely diced and cook it right up with the onions. I do sometimes, sometimes I don’t. It depends on if I happen to see the celery in the fridge and the mood strikes. It gives a nice little texture.

You can peel your potatoes or not. I like them peeled for the best flavor because every surface absorbs a little of that dressing, but if I’m in a hurry, I won’t bother. It’s seriously good ether way. If I’m using little baby reds, I don’t peel, either; I’ll just give them a cut or two. Do use red potatoes. They’re waxier and that helps them from sucking up all the vinaigrette so a good coating stays on the outside and it’ doesn’t get dry. Today, I didn’t happen to have any and used russets. They’ll do in a pinch but they’re not ideal.

The only pricey item in this recipe is the bacon – do watch for sales, especially during holiday weeks (and we have so many in the summer), stock up and freeze. Potatoes are never usually expensive but if you have a cool place to store pick them up on sale – but don’t store potatoes and onions together

Cook potatoes in salted simmering water, about 15 minutes until just tender; don’t overcook. Drain and add to a large bowl in two or three layers, sprinkling each layer with salt and pepper and a little vinegar. You’ll use and a total of two of the tablespoons vinegar on the potatoes; the remainder will go in the vinaigrette.

While potatoes are cooking, prepare the vinaigrette:

In a saute pan, cook bacon until brown & crisp and remove. If the bacon was lean, add the optional oil. You’ll want about three tablespoons of drippings/oil in the pan. Add onion to the pan and cook until the onion is golden brown and softened.

Add the beef broth, bring to a boil and remove from heat. Add the remaining two tablespoons vinegar and reserved bacon, taste for salt and pepper, and add a good pinch of sugar.

Drizzle vinaigrette over potatoes and gently toss. Garnish with parsley or green onion. Serve warm or at room temperature.

I’ll be bringing this recipe to Fiesta Friday, hosted this week by Monika @ Everyday Healthy Recipes and Jhuls @ The Not So Creative Cook.