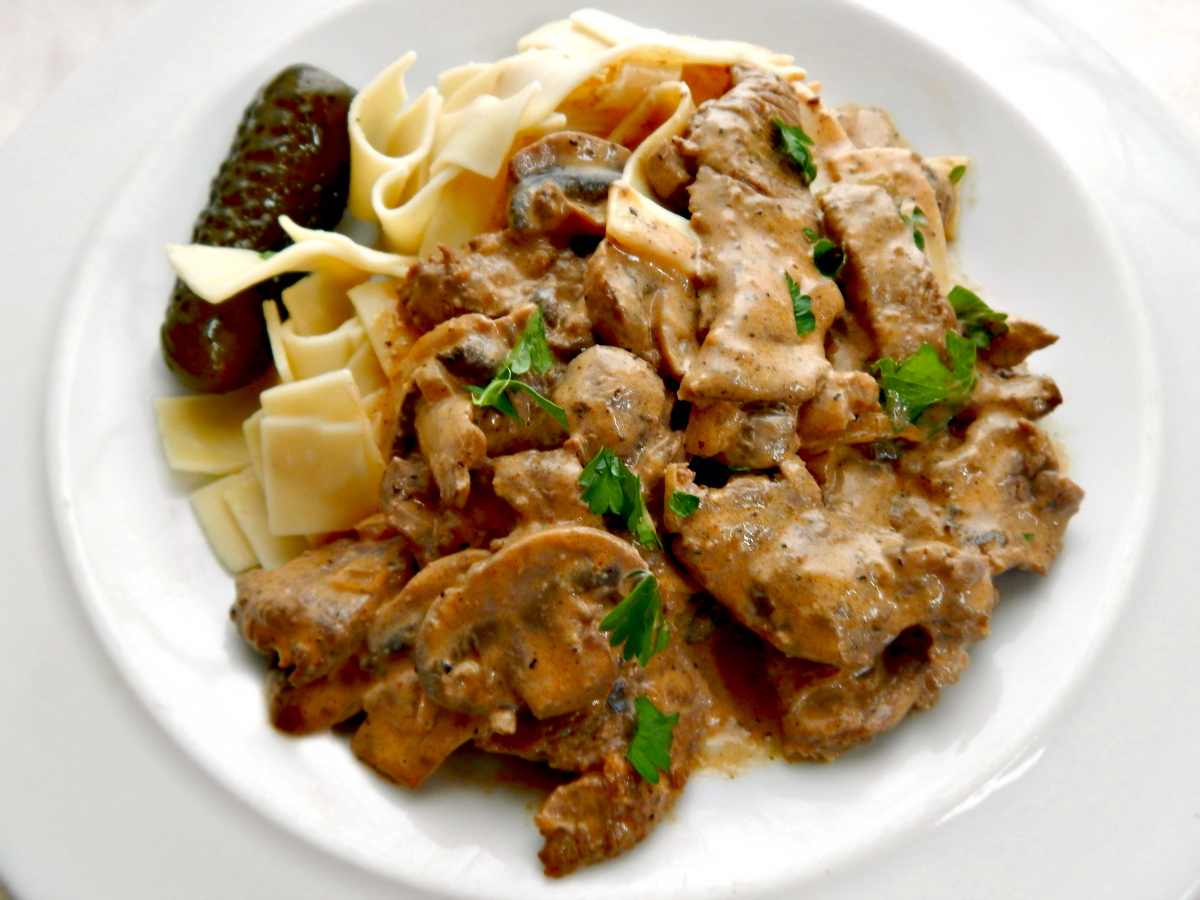 Do any of you guys have that one Aunt? The one that always made you feel special and had just a little something extra to her personality? Mine was my Aunt Ginny, my Dad’s sister. She was definitely the fun Aunt, and she was fabulous. And she was a fabulous cook, too. I have a couple of her recipes on my site but my favorite is The Best Beef Stroganoff.

My Aunt Ginny’s Beef Stroganoff – she brought the recipe back from Russia during the Cold war.

About The Best Beef Stroganoff:

Beef Stroganoff is one of those fancy meals that are super easy and super fast and is really almost a cheat to make. Even this recipe for the Best Beef Stroganoff that has a few special touches you might not see in our run of the mill American Stroganoffs is still fast and easy. As a matter of fact, Stroganoff only has a handful of ingredients and I can’t for the life of me understand why so many of us Americans put so much strange stuff in it. Mustard, Worcestershire sauce, cream cheese, ground meat all come to mind.

I’ve been told no self-respecting Russian would serve Beef Stroganoff without Sweet Gherkins on the side, but the Sweet Gherkins are IN this recipe. And they’re the perfect counterpoint to all the rich cream. Try them in the dish. You can push them to the side if you don’t care for them…did I say that? Seriously, don’t do that…

The other things that make this Stroganoff special? It uses soured cream, not our American Sour Cream and it’s served (normally at our house) over rice, just like Aunt Ginny had it in Russia. I didn’t use the rice when I made it for my Dad (Aunt Ginny was Dad’s Sister) and just used a good egg noodle. He was not happy. Nor was he happy that I use a pretty heavy hand with the spices, a lighter hand with the cream (I use half beef stock and half cream so the stroganoff isn’t so heavy) and tossed a smidge of brandy in the mix.

I guess we’ll have to have a “Stroganoff Off”, Dad and I, and see what version is the best. Between you and me, I’ll make it exactly like Ginny next time, just for my Dad. When you’re my Da’s age, sometimes you just want what you want and at his age, he deserves it, too! And I’ll give you my Aunt’s recipe and my changeups, too, in parentheses, which are really pretty minimal so you can choose.

My Aunt Ginny’s Beef Stroganoff – she brought the recipe back from Russia during the Cold war.

Beef Stroganoff is so simple that technique makes all the difference. Prep all your ingredients ahead of time and have them at the ready because you’ll be using a pretty hot pan and the recipe cooks quickly. Like minutes quickly and you’ll want to work fast. Start with “souring” your cream so it’s ready when the rest of the recipe is done.

Slice the meat thinly against the grain (place it in the freezer for about 25 minutes and the firmer meat will be easier to slice) and really sear the beef until it browns over a *sharp* fire, as Ginny said. That’s high heat. Remove the beef and be careful while cooking those mushrooms not to burn the bottom of the pan and that lovely fond. That fond is so important to the flavor of the dish. If the pan is getting too dark, add a little water and stir the fond up.

Never boil the stroganoff after the cream is added, just gently warm the cream through. Boiling may cause the sauce to curdle. If you need to reheat (as if anyone has leftovers!) in the microwave, be very careful and heat at a lower setting if possible. High heat will cause the sauce to separate.

My Aunt and folks always used thinly sliced Sirloin for this recipe, I’ve always used Round steak (you have to be very careful not to overcook either, especially the round or it will be tough and not tasty) and many recipes use the pricier tenderloin. Personally, I like the flavor of the Sirloin best, but you can choose your price point.

Both mushrooms and cream are often on sale around holidays and Aldi usually has great prices on both. Cream keeps for weeks, due to its high-fat content, in the fridge.

Mushrooms last a bit longer if you turn the package over and poke a few holes in the bottom. Store them upside down. That way they won’t sit in condensation and won’t go south as quickly.

Aunt Ginny’s Recipe (My changes are in parentheses)

First, sour the cream by adding a tablespoon of vinegar per cup of cream. Set aside.

Preheat a large skillet with 2 tablespoons butter over medium-high heat. Sprinkle beef with paprika, nutmeg and salt, and pepper. When the skillet is good and hot, working in batches, lay beef in a single layer; cook until seared and browned on the first side, then turn and quickly sear on the second.

The beef should be well browned and still slightly pink in the center; it will continue to cook a bit from carryover heat as it rests and cook a little more when it is returned to the hot sauce. Remove from heat and set aside, tented with foil to keep warm, and repeat.

Turn the pan down to medium, add the remaining two tablespoons butter and add onions and mushrooms to the pan. Cover and cook for several minutes, stirring now until beginning to brown. Remove the lid and continue to cook until mushrooms are golden brown and the liquid is pretty much gone. If the bottom of the pan is getting too dark and in danger of burning as the mushrooms cook, add a little water to the pan (maybe two, three tablespoons.) Add garlic to pan if using and stir for a minute or two until garlic is fragrant.

If using brandy, add to the pan, carefully off heat and stir until evaporated, scraping the bottom. Put the pan back on the heat. Push the mushrooms aside and add the tomato paste, cooking until it loses a bit of its bright red color, about a minute or so.

If using stock, add it now and cook until reduced by about half. Turn the heat to low and add the cream (either the one cup or two cups depending on whether part of the liquid you used was stock) and stir in to form a sauce. When the cream is warmed through, add the beef back in along with any juices and the julienned gherkins, and stir together.

Taste, and add more salt and pepper if desired. Garnish with parsley if desired and serve over rice or pasta.

I’ll be sharing this at our very own Throwback Thursday Link party, hosted by Quinn, Alli, Carlee & Meaghan. Click the link to check out our blogs & rules or just click the blue froggy, below.

I’ll also be sharing to Angie’s Fiesta Friday Party – the hosts this week are Julie @ Hostess at Heart and Linda @ Fabulous Fare Sisters. Stop by and mingle.

28 thoughts on “The Best Beef Stroganoff?”