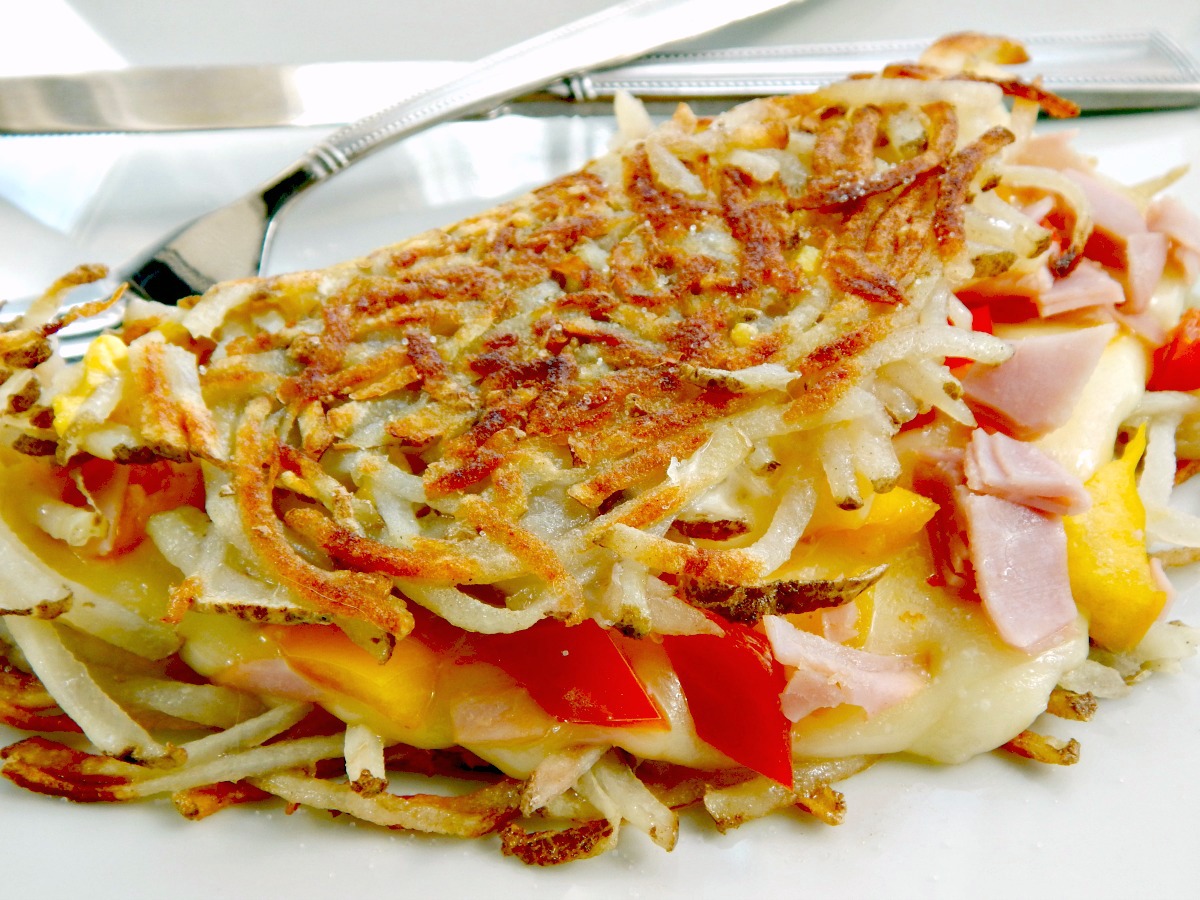 First, I have to tell you the story about how I found the Hashbrown Omelette, or if you’d like to call it, the omelet of awesome deliciousness. This omelet is a layer of beautifully cooked hash browned potatoes topped by a thin layer of egg, cheese, ooey and gooey, & a filling of your choice. Then, the whole works is folded over into a crispy, crunchy, on the outside, cheesy, creamy, on the inside, breakfast.

But on to the story: My small Iowa home-town was founded, after many disasters, by a few Irish families. My Mom told me they settled there because the land, with its easy rivers and gently rolling hills reminded them of their Irish homeland. Despite floods, harsh winters, “Indian” troubles, droughts and grasshoppers, they made a go of it. The town was even picked up and moved once or twice. Over time, they were joined by others, and the town grew but always kept its Irish flair.

So, of course, you’d expect celebrations for St. Patrick’s Day, as a point of pride. It’s a rollicking good time: parades and events all weekend; family and friends flock to the area and it’s become a time of reunions and gatherings of family and friends. Houses, of course, are full of celebrants, the streets full as well, and everyone is wearing green! I wasn’t there but I watched it unfold this year through Facebook.

Brian Boru Band in front of the statue of Robert Emmet, courthouse in back. There is a chunk of the Blarney Stone embedded in the base of the statue.

That is how I discovered the Hashbrown Omelette! Tanya, one of our hometown ladies, posted a photo! She made close to dozen, wasn’t it Tanya? Hashbrown Omelettes for her family the morning of the St. Patrick’s day parade. When someone is making that many of something, well, you know it’s a labor of love. You know it’s something so fantastic that everyone is clamoring for them. And Tanya, it seems, wasn’t going to let anyone go without! (Small towns = Big hearts.)

Immediately the comments began pouring in, from friends and family who weren’t there to eat them, reminiscing about them, asking for the recipe. Lots and lots of comments! I knew I had to find out how to make Hashbrown Omelettes! I knew I had to try one! Tanya and I sent several emails back and forth and she detailed out each step for me. Thank you, Tanya! Believe me, I wasn’t disappointed!

I had a few worries about making Hashbrown Omelettes, all of which proved to be of no consequence. The recipe is easy, quick and no-fail! It always helps to get a recipe from an expert – they guide you through any potential pitfalls. Here’s what I wondered about:

While I wanted to try Hashbrown Omelettes because they looked & sounded so fantastic, it turns out they’re frugal as well. Bonus! Tanya (and I) used a grated potato, which she notes everyone likes best, but she said 3/4 cups of frozen hashbrowns will work, too.

They need cheese, and her daughter (like most kids) loves the American cheese, which is guaranteed to be oozy! Well, that’s dirt cheap, too! (I used a Muenster in mine, from Aldi, because that’s what was in the fridge, and Tanya’s son-in-law prefers Cheddar.) I think anything that melts nicely would work here!

Hashbrown Omelette – Much quicker than you’d think to make!

Next, you add the egg (just one, two is just too much) & a few toppings – it turns out only a few toppings will fit in, so that’s inexpensive, too. Feel free to go wild with almost anything and you won’t break the bank.

The possibilities of add-ins for Hashbrown Omelettes, from down-home to chi chi gourmet are almost endless. I can see myself riffing on these as a way to use up whatever is in my fridge. Maybe a Pizza Hashbrown omelet would be great, or Asparagus and Goat Cheese. Mushroom Swiss? I know my son would like a “Meat Lover’s” version.

If I were cooking these for a crowd, I’d consider preparing all the toppings in advance and lay them out on a tray so everyone could pick and choose what they’d like for a personalized experience. Any extra can be scooped into a salad for dinner that night.

So, here is Tanya’s Famous Hashbrown Omelette, and I hope I’ve done them justice! They are going to be a new tradition at my house, and a few others, too! And for all you home-towners, Erin go Braugh! (You can see that I did kiss the Blarney Stone embedded in Robert Emmet’s statue base – I just keep talking and talking and talking, lol!) Now that I think of it, maybe I should say Hashbrown Omelette go Braugh!

This omelette is a layer of beautifully cooked hash browned potatoes topped by a thin layer of egg, cheese, ooey and gooey, & a filling of your choice. Then, the whole works is folded over into a crispy, crunchy, on the outside, cheesy, creamy, on the inside, breakfast.

Melt about a tablespoon of butter in a 12″ skillet over medium to medium-high heat.

Add potato and with a spatula, flatten into a large thin circle. Leave an empty space around the outside edge of the hash browns and the edge of the skillet, but spread the potatoes as evenly and thinly as possible with as few holes as possible. Make sure the 10″ inch lid will fit over the top of the hashbrowns.

Place three small pats of butter on top of the flattened hash browns, salt, and pepper if desired, and cover with the lid. Cook until the bottom of the hashbrown is showing just a bit of browning. Note: If you haven’t done it ahead, this is an ideal time to chop up the ham, mushrooms, onions, green peppers or whatever is going inside in the omelette.

When the hash brown has begun to brown, add egg and with the bottom of a spoon or a spatula, spread and nudge it across the hash browns. Put the lid back on and let the egg set for a minute or two.

When the egg is no longer runny (it doesn’t have to be completely done) add a slice of cheese to the center. Fold and break the other slice into triangles and add a “point” to each side of the slice. (It will look like a four-sided star.) Replace the lid and let the cheese melt slightly.

Uncover, add toppings and fold half of the omelette over on itself. Put the lid back on for just a moment so it heats through, then unlid and serve immediately.

This makes one. If you’re making a lot, simply cut up enough toppings all at once. Potatoes need to be freshly grated or they’ll turn brown. A food processor makes this easy and makes the best looking omelette because it makes long shreds, if you don’t have one, a helper can grate and cut toppings as you cook.

These are so good, I’m going to post them on Fiesta Friday, an ongoing blogger’s event. Even if you just came to see Tanya’s recipe, check out Fiesta Friday Friday! Bloggers “bring” their best dishes for this weekly event. It’s a great way to see a lot of different dishes and recipes. This week, it’s co-hosted by Selma @ Selma’s Table and Margy of LaPetite Casserole.

Update: This recipe was featured on Fiesta Friday! Thank you guys, I’m honored!