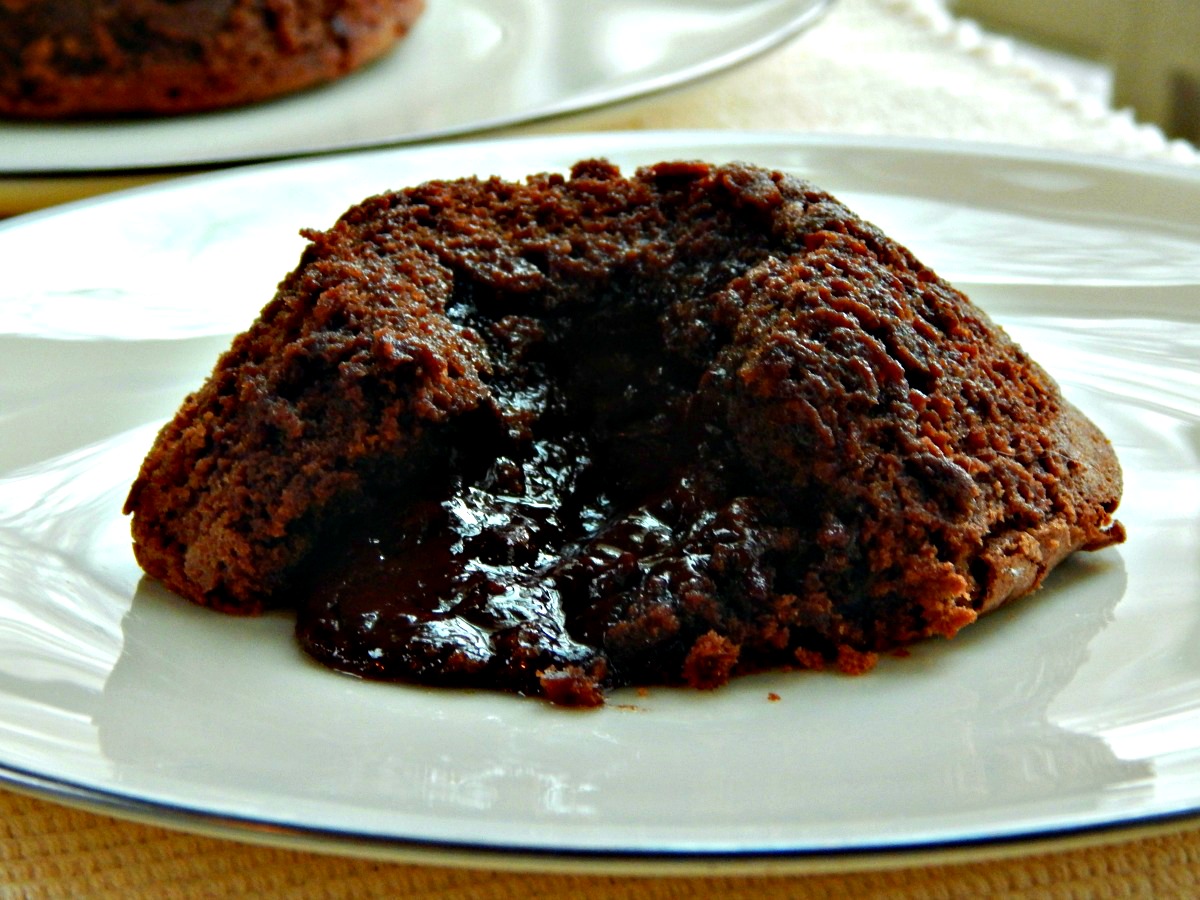 Individual Molten Lava Cakes have become ubiquitous – they’ve been around for years and seem to have a huge staying power, especially in restaurants. Why? Because they’re so darn good, pretty cheap to make and impressive when done right. I kinda think I’m over them…until I take a bite!

I posted not too long ago about Individual Chocolate Souffles, which to my mind are a different animal than the Molten Lava Cake. With much discussion, I learned that under baking a souffle with split-second timing can leave a souffle with an oozy, flowing center. That method just doesn’t compare to these Molten Lava Cakes. These ooze a gorgeous ganache of pure chocolate without any fuss or bother.

And when I say these ooze, I mean they really ooze. A rich, pure chocolate river of ganache flows beautifully out of the dessert. Yum. The secret? Tuck a little ball of chocolate ganache in the center of the little cakes before baking. And just to clarify for any of you that aren’t familiar with the term ganache, that’s chocolate melted with cream and is basically the center of a chocolate truffle.

You’re gonna have leftover cream, but that’s ok because you can garnish these with whipped cream to use up the rest of the carton. And you’re gonna want something (ice cream will be excellent, too) to serve with these cakes, they’re so rich and that warm chocolate (I think) is best cut with something vanilla! If you’re feelin’ fancy, add a touch of your favorite liqueur to the whipped cream and sub it in for the vanilla in the recipe. I vote for Frangelica!

I was hesitant to post two such similar desserts so close together, this and the Individual Chocolate Souffles, especially when I am always itching to move on to the next best thing or post another favorite family recipe! There was an outcry, here, of a poor put upon family member who wasn’t present for the Souffles. While I can’t make everyone happy, it’s possible I can brighten up the day of a few! And these cakes will brighten up the day of anyone you serve them too! And brighten up yours, coz you’re gonna be the hero of the day!

Below, Jon Favreau “schools” Oliver Pratt on the nuances of the Chocolate Lava cake in the movie “Chef.” I LOVE that movie and have watched it umpteen times, but before you watch, I’m giving you a bad language warning!

Chef: has a meltdown, plunges his hand into the critic’s lava cake and screams about the ball of ganache and how it isn’t just an under baked cake.

You’ve got to plan ahead for this recipe. The chocolate ganache needs to cool in the fridge for at least two hours before you can put it together with the cake and bake. Spread it into a shallow container and it will cool quickly.

The good news? The cake is super easy to mix together, but you do need a mixer. You’ll melt the chocolate for the cakes with your butter. I just use the microwave, starting with a minute, then stirring and if it’s not melted, I do 10-second increments. Yeah, ya probably have to sit there and watch it. It’s worth it. And only go until just melted; the less you heat, the less time you’ll spend waiting for it to cool so you can use it.

Then mix eggs, yolks, sugar and vanilla (or a liqueur if you want, but use about a teaspoon if you do that) in the stand mixer, probably about four or five minutes on high or by hand, five to six minutes, until the mixture falls in thick ribbons. It will be lighter in color and increased by about three times the volume. By hand stir in the chocolate/butter mixture and the flour, gently so the volume isn’t deflated. Fill the ramekins, pop in your ball of ganache and bake. And wait for the longest 12 to 15 minutes of your life!

When Molten Lava Cakes first came on my radar, I tried a lot of different recipes. There were a couple of Cook’s Illustrated among them, but my favorite by far is this one posted on a Ghiradelli advertisement and it was in nearly every food magazine I leafed through for nearly a decade. See how it pays to not be a “foodie” or a “food snob? and leave the recipes in the mag behind and cook from an ad, lol!

Ghiradelli isn’t paying me anything, but I gotta say I love their dark 60% Cacao Bittersweet Chocolate Chips in this. They deliver a great, over the top flavor. Any semi-sweet or bittersweet chocolate will work, or a mix of chocolate, if you like. If deep, dark chocolate isn’t your thing, use what you like, then you’ll like the cakes. Milk chocolate (I think) is really too light for the cakes themselves, although it might work for the ganache balls, although the color would be very light.

If you’d like to make these often, increase the ganache ball recipe, roll into balls, place them, spaced apart, on parchment or wax paper and freeze. Once frozen, roll in the waxed paper and place in a Ziploc. With the Ganache balls on hand, you can make these at a moment’s notice.

The recipe calls for six 4-ounce ramekins and the four-ounce size does work best. The little cakes are taller, the ganache ball fits in perfectly and you’ll get maximum ooze.

I only have various ramekins that are 6 ounces (3/4 cup) and are the standard white ones you can pick up almost anywhere and I have assorted custard cups (the glass kind). I’ve made this recipe a ton of times in both. I think they might be just a little bit less spectacular but still fabulous. I have not tried dividing into four servings because they are so rich as is. There are some things to know when you vary the recipe with a different size ramekin.

In a pinch, bake these in muffin tins if you don’t have ramekins. Use a cookie sheet under the muffin tins to add a little insulation so the bottom of the cakes don’t get too hot and the ganache doesn’t get too liquidy prematurely.

The chocolate in this recipe is a huge variable. The best are pricey and wonderful! I’ve used nearly every kind of chocolate over the years and often use chocolate chips, which are on sale more often than other chocolate. I avoid “baking” chocolate unless it’s a good one. Don’t forget the day after Valentine’s when you’re likely to find bags of good chocolate in the form of candy, 1/2 price. Stock up if you have more will power than I do!

Buy butter on sale, especially during the Winter Holiday season or pre-Easter sales. Freeze it where it will keep fine for months and do really stock up at a low. Butter is also a lot less at both Costco and Aldi and the Aldi prices rival the best grocery store sale prices.

Eggs can also be bought during holiday sales and keep well for several weeks. Refrigerate right away and never store in the door; eggs keep best in a colder part of the refrigerator, in their own box. (Then put your partially used vegetables in the door where you’ll see them and remember they need to be used ASAP – the half a bell pepper or onion, etc.) In doubt about an egg? It’s very rare to find a spoiled egg but if your egg floats in water, it’s old and has probably thickened a lot from air exchange. See my post on over 75 Ways to Use Egg Whites for how to handle the extra white you’ll have from this recipe.

In a microwave-safe bowl add chocolate and butter. Microwave 1 minute. Stop, stir. If not completely melted, microwave in 10-second intervals stirring after each. Whisk gently to blend.

Refrigerate for about 2 hours or until firm; this cools faster if poured into another (not hot) shallow container. Once firm, divide into six portions and quickly roll into balls. Refrigerate until ready to use. May be frozen.

Melt the chocolate designated for the cakes with the butter in the microwave for 1 minute. Stop and stir, place back into the microwave if needed for very short periods, about 10 seconds each, stirring after each. Heat only until melted, then stir until smooth. Set aside to cool.

Using an electric or stand mixer, whisk the eggs, yolks, sugar, and vanilla on high speed for about five minutes until thick and lightened in color. Mixture should form thick ribbons when allowed to fall from beaters. By hand, fold in the flour and melted chocolate. Spoon into prepared ramekins.

Place ramekins on a baking sheet and bake for 12 to 15 minutes until the cake is firm to the touch in the center. Remove and allow to sit for about five minutes.

To unmold, run a knife around the edges of the ramekins, place an inverted plate on the top of the ramekin and turn over. Cake should fall out onto the plate. Serve immediately.