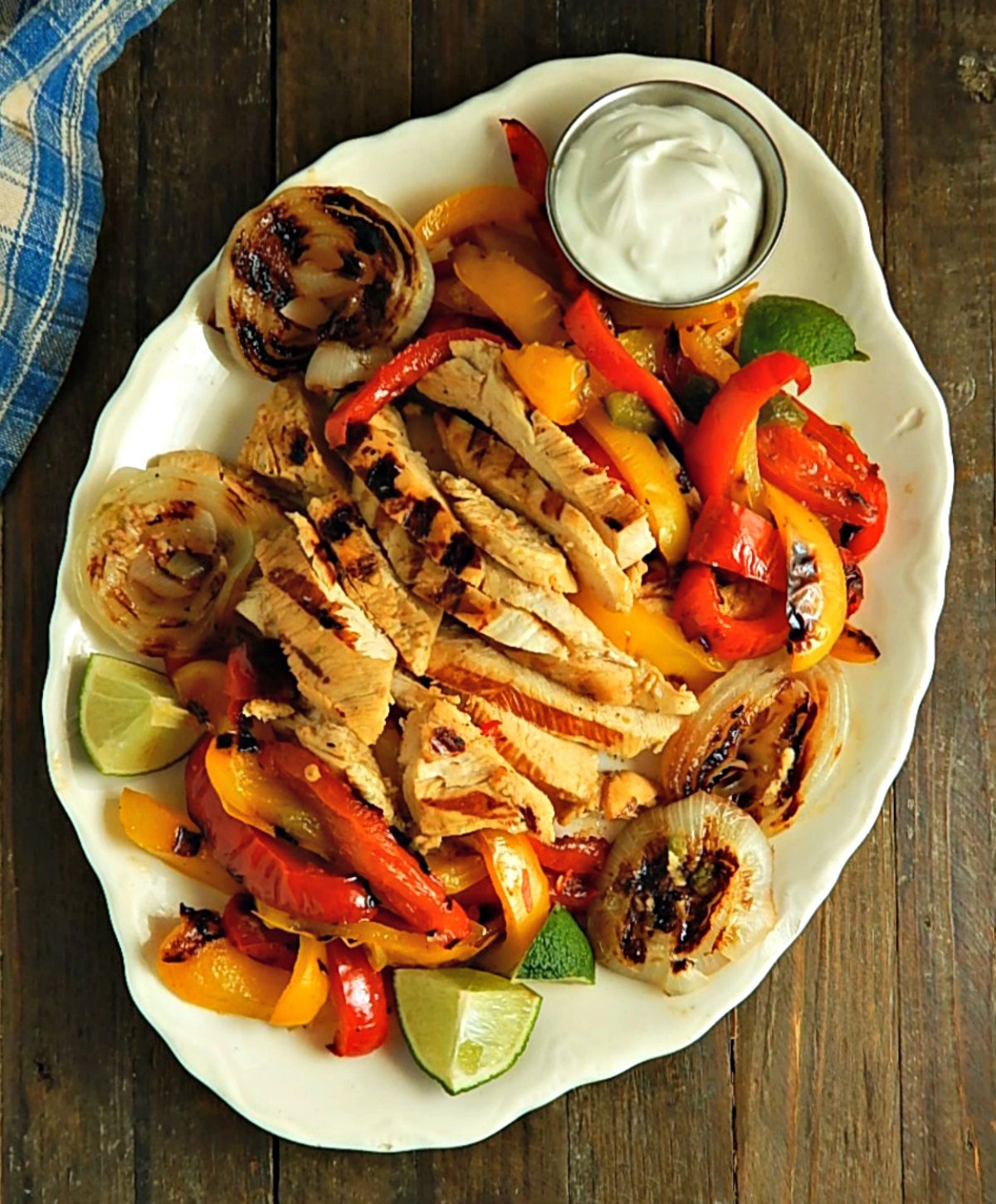 I love fajitas and have made them on a sheet pan, made them in my cast iron skillet and I have a dry Fajita Seasoning on my site. Every once in a while I want the real deal. Real deal smoky, garlicky, lime-y grilled fajitas. Classic Grilled Chicken Fajitas.

Yep, Classic Grilled Chicken Fajitas that are going to remind you, when you make them, of all that’s good about Fajitas. It will take you back (if you’re old enough to remember) to when fajitas started appearing in restaurants, brought to the table sizzling and hot on a cast iron pan. That was the dish you’d order that would turn everyone’s heads as the waitress (or waiter) wove through the tables to yours.

And so the sheet pan version is good, and the precut veggies, sometimes frozen, are alright, but every once in a while, you should treat yourself. To smokey, sizzling, juicy strips of chicken that wake up your taste buds, beautifully cooked veggies, and all the great accompaniments you could ever want.

Remember to heat up lots of extra tortillas. You’ll always need more than you think because you’ll start stuffing them and realize fast that you’re running out room as you take a bite and everything slips out the backside of your tortilla!

I like to serve my fajitas with black beans (I just usually doctor up a can with a little garlic & cumin) and a side of Mexican Rice. Either this Classic Mexican Rice or this Instant Pot Version. And of course, some of my fave accompaniments.

I’m pretty sure this recipe is from Cook’s Illustrated. Or maybe Cook’s Country or America’s Test Kitchen. I didn’t note it in my recipe box, but the great detail in the recipe makes me think that’s a big possibility. And also I seem to remember they are the ones that came up with the great idea of saving out some of that marinade and tossing it in with the cooked chicken and veggies, infusing them with fresh flavor right before they’re served.

Just start off on the grill with the onions first, then the peppers and then the chicken because the onions take the longest to cook, then the peppers, then the chicken. And if you want to do each of the tortillas indiviuaually that’s fine; they’ll pick up a nice smoky grilled flavor. If you’re not feeling that, you can put them in packets of six, wrapped in foil and heat them on a low part of the grill turning now and then.

Fajitas are actually pretty inexpensive to make, and so are the sides. It’s seriously all the accompaniments that start adding up! Watch for your chicken on sale; it usually comes in larger family packs so break it down to convenient sizes and freeze. Bell peppers go on sale regularly and last a week or two in the fridge. Buy them when you see them, and buy a few extra for the following week.

Cheese is regularly on sale, and so is sour cream, so get in the habit of picking items like this up before you need them, when you see them on sale, if you use them regularly. As far as the tortillas, I rarely see them on sale. Look for them in endcaps, in the refrigerator section, and in the Mexican food aisle and compare the prices.

In a medium bowl, whisk together the marinade ingredients, the lime zest & juice, 2 tablespoons oil, garlic, soy sauce, brown sugar, 1/2 teaspoon salt, and 1/2 teaspoon pepper, cayenne, and jalapeno. Reserve 1/2 marinade in a small bowl; set aside. Place the chicken and the remaining marinade in Ziploc set aside for 1/2 hour; may marinade longer, but refrigerate. Brush both sides of the onion rounds and the peppers with the remaining 2 tablespoons oil and season with 1/4 teaspoon each of salt and pepper.

Prepare grill and bring a large piece of foil to tent the fajitas with and a clean kitchen towel to wrap tortillas in when they come off the grill.

To grill the vegetables:

Place the onion rounds and peppers (skin side down) on the cooler side of the grill. cook the onions until tender and charred on both sides, 10 to 12 minutes, turning every 3 to 4 minutes. Meanwhile, cook the peppers until spottily charred and crisp-tender, 8 to 10 minutes, turning once or twice as needed;

To grill the chicken:

Remove the chicken from the marinade and place it smooth side down on the hotter side of the grill; discard the remaining marinade. Cook the chicken until it’s well browned, 4 to 5 minutes; using tongs, flip the chicken and continue grilling until it’s no longer pink when cut into with a paring knife or an instant-read thermometer inserted into the thickest part registers about 160 degrees, 2 to 3 minutes longer.

As the chicken and vegetables are done, transfer them to a large plate; tent with foil to keep warm.

Working in 2 or 3 batches, place the tortillas in a single layer on the cooler side of the now-empty grill and cook until warm and lightly browned, about 20 seconds per side (do not grill too long or the tortillas will become brittle). As the tortillas are done, wrap them in a kitchen towel or a large sheet of foil.

Separate the onions into rings and place them in a medium bowl; slice the bell peppers lengthwise into ¼-inch strips and place them in the bowl with the onions. Add 2 tablespoons reserved unused marinade to the vegetables and toss well to combine. Slice the chicken into ¼-inch strips and toss with the remaining 2 tablespoons reserved marinade in another bowl; arrange the chicken and vegetables on a large platter and serve with the warmed tortillas and desired accompaniements.

I’ll be sharing Classic Grilled Chicken Fajitas at Fiesta Frida 301, hosted this week by this week by Antonia @ Zoale.com and Angie, herself.