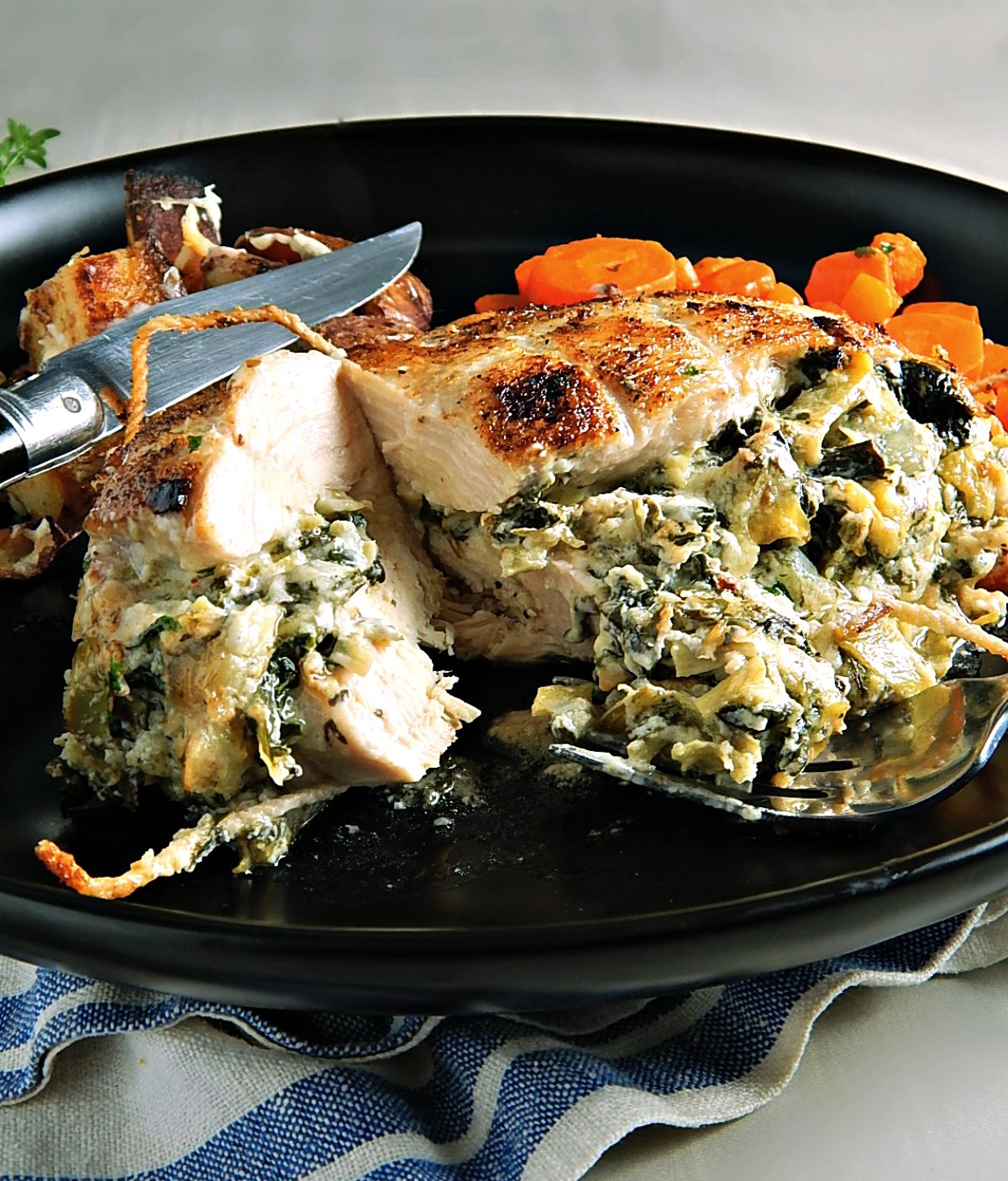 So is it hot where you are? My gosh, it’s like Hades up here in Minnesota, you betcha, and we’re really not used to high 80’s to 90-degree weather on a regular basis. A little in August maybe but I’m just about dying.  And while I’d love to be out grilling something, I’m like “No thank you! I’m staying inside, baby.” Instead, I’m posting this super simple (although it looks fancy) Three Ingredient Spinach Artichoke Dip Stuffed Chicken Breasts.

And those three ingredients? One is the chicken, another is the Spinach Dip, and the last is a little oil for the skillet. You can’t get easier than that. (Salt & pepper don’t count as ingredients as far as I’m concerned. They’re like “freebies!”) And you can’t beat a fast cooking skillet chicken in the summer – or any time of year!

Spinach Artichoke Dip Stuffed Chicken Breasts is really creamy, dreamy deliciousness. As you can see, I went a little over the top on the stuffing, coz that’s the best part, xoxoxo, oozy cheesy deliciousness! You can always be a bit more moderate and use a little less if you’d like. But why, lol?

Since I’m a geek, one of the favorite parts of this recipe is the way I tied the chicken breast up, which is actually pretty easy to do, but toothpicks work just fine if you’d rather. It’s easy to tie. Use a string longer than you’d think, then keep wrapping it around the breast, looping each wrap through the one above it in the center of the breast, leaving some slack, about 3/4 of an inch, then repeat. You’ll have to kind of “arrange” each wrap around and pull it snug as you go. Tie off your long string to the tail left on the underside of the breast.

You can serve your breasts with just about anything you’d like; just maybe not spinach!! I chose my Glazed Carrots with Parsley Butter and tossed some quickly cooked baby potatoes on the side. I think rice pilaf would be a beautiful thing, too, or you could go low carb with cauliflower rice.

With all this heat, I’ve been doing some floating in the lake thanks to my wonderful neighbor, Karen, who’s been letting me and my neighbor and friend, Sandy use her dock and floaties. And in the late evenings, Chance (my deplorable lab-radorable) & I have been walking down to the beach, after everyone is gone, and sneaking in a swim for him while I wade. It’s nice to cool off before bed. And I have been drinking a lot of ice tea. What are you guys doing to keep cool in this heatwave?

My roses are all but done, but I have a few late blooms & I just had to bring some in before our thunderstorm hit the other day. And the roses need a spray! Uggh, gardens. I never got any further than sticking those roses in my plastic drinking cup (and I must have 10,000 vases) but they make me smile! I used them in my post on Feta Cheese the other day, too. Now I can look back at them this winter!

One of my two remaining old fashioned bush roses

This is such a simple recipe and I love it because the Artichoke Dip keeps the chicken beautiful and moist and it’s the perfect exchange. The chicken flavors the dip and the dip flavors the chicken. Cook that chicken to about 160 degrees F, making sure to check the actual chicken, then let it rest a little so the molten dip doesn’t all spill out. The temperature should rise as it rests to the proper temperature of 165 degrees. I don’t stuff this ahead but if you do I’d go to 165 just to be on the safe side.

You can make your dip, and I did because when I made this Spinach Artichoke Dip, I actually tossed a bit in a Ziploc bag and froze it so I would have some to make this chicken with! That dip freezes well, by the way. The store-bought dip works just fine, too, as does your own favorite recipe, so use what you want. Obviously, this recipe works best with a thick, substantial dip, not something too thin.

Note that this recipe is for four chicken breasts even though I only made two. It’s easy to scale up and down as needed. And of course,  I don’t have to tell you what to do with any extra artichoke dip, I’m sure!

Shop carefully for your chicken and know the highs and lows in your area; normally chicken will drop to a rock bottom low once a quarter or so. The larger family packs are generally less per pound so pick them up and portion in sizes your family will use and freeze.

Although my Artichoke Spinach Dip is wonderful it does have quite a few ingredients and isn’t something that can easily scale down to a cup or so for this chicken. And you may not want to go to all the trouble of making it or any spinach dip just for this recipe – for one thing, frozen spinach or canned artichokes aren’t easy things to divide. This is one case where I recommend going the easy route and just picking some up at your store’s deli.

With a sharp knife, make a cut horizontally into, but not through, the chicken breast, forming a pocket. Make small shallow cuts to ensure the pocket is as deep and large as can be while still keeping the breast intact. Season as desired with salt and pepper. Stuff spinach dip deeply into the pocket and tie as directed in the post or close as best as can be done with toothpicks.

Heat oil in a large skillet over medium heat and cook until golden brown, about three to four minutes per side. Test with a thermometer and remove when 160 degrees. Let rest for several minutes before serving.

Note: the exact amount of spinach dip used depends on personal taste and the size of the chicken breasts.