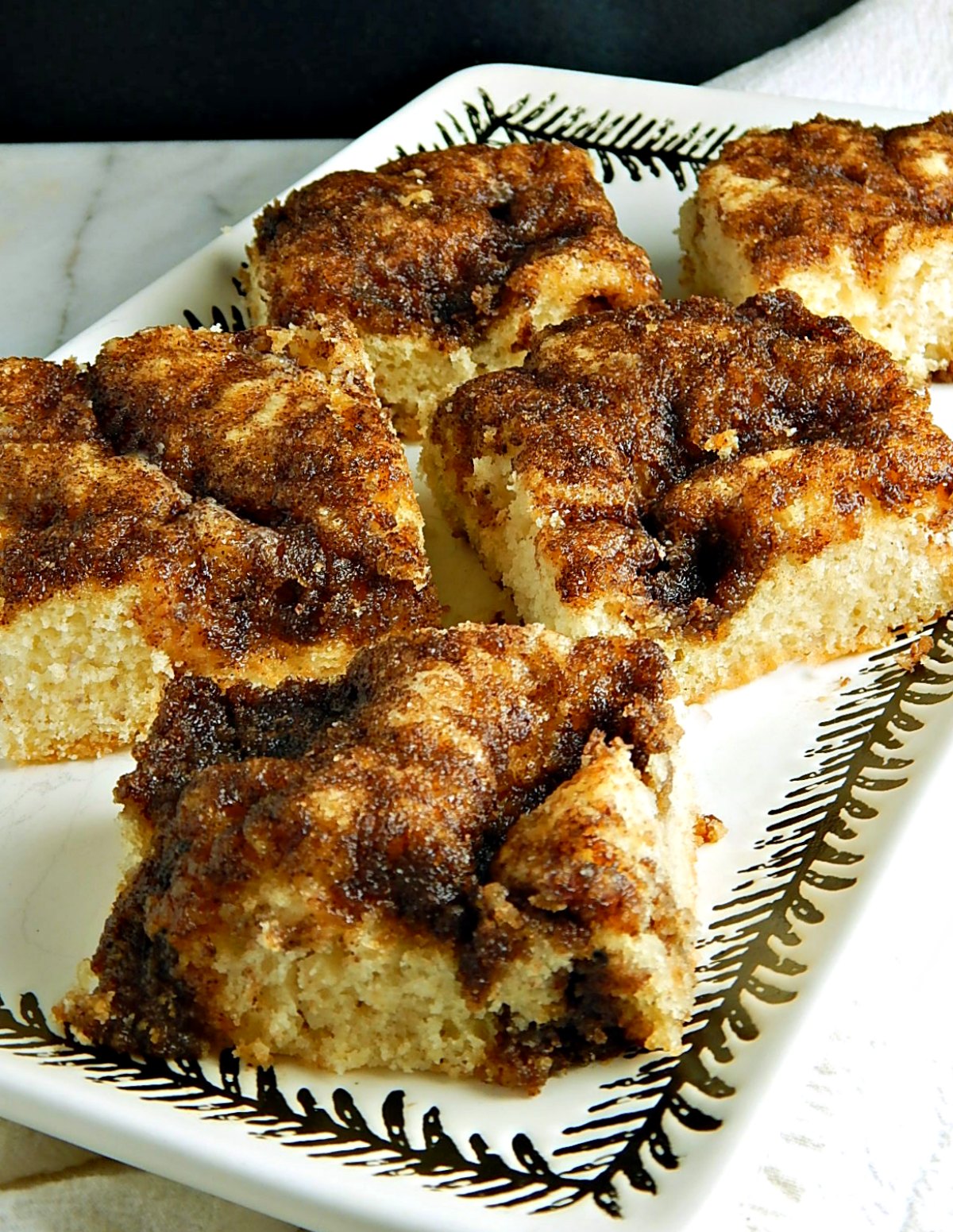 Not too long ago, I came across a photo of Moravian Cinnamon Flop Cake – and I took notice right away. I had made this super simple but oh so delish cake before, with my Mom’s help when I was a teenager. And I remembered because this cake is so distinctive looking and I’ve yet to see another cake that’s anything like it.

Moravian Cinnamon Flop Cake is a coffee cake (if you are elsewhere, in the States, a coffee cake is made to be eaten with coffee and isn’t a cake that contains coffee) but what makes it stand out is the brown sugar-cinnamon topping that is like no other! As you can see there are dimples in the cake that form pockets and rivulets of ooey-gooey caramelly deliciousness. That being said, it’s not so over the top that you should be afraid to eat it; it’s just a perfect amount of sweetness to balance the rest of otherwise plain jane cake.

Like many heritage recipes, Moravian Cinnamon Flop Cake is a little conservative in the use of butter, sugar, and eggs so this cake isn’t overly rich; it’s a little plain, in fact except for the topping. And while I couldn’t nail down exactly why it’s called a flop cake (there are speculations it is based on a Swedish flop cake), I think someone thought it must have been a bit of a flop when they first pulled it from the oven! Until they tasted it!

The Moravians are a Protestant religious community originating in Bavaria and Moravia (present-day Czech Republic) who established a permanent presence in Pennsylvania around 1741, and from there, expanded into North Carolina. And of course, they brought their history, culture, and food with them, including this Cinnamon Flop Cake. You’ll find versions of this cake in all kinds of old cookbooks and it hasn’t changed up too much over the years. At least not enough so it’s not still recognizable.

Since some of the earliest versions, as I’m guessing these early settlers had to “make do,” only contained two tablespoons of butter and sometimes no egg at all, the original must have had a kind of biscuit quality. And this one still does, but there’s no denying that most cakes are a little better with a little more butter and an egg doesn’t hurt, either. Nor does just a smidge more of the topping! Even with those few additions (and a lot of recipes these days have both egg and a little more butter), this simple coffee cake is still very much in keeping with the old recipes.

You’ll want to eat your Moravian Cinnamon Flop Cake warm if possible, as soon as it’s cooled enough to handle. And while it’s still good the next day, you’ll notice the texture begin to change a bit as the topping softens so don’t keep it around too long. Leave it around for several days, depending on the humidity, and it isn’t as pleasant to eat. So for this cake, you’ll def want to live in the moment!

This cake super easy to make by hand (and fast – it takes no time) and you’ll see the similarities to biscuit making; it uses what we call today the reverse creaming method. Rather than creaming the butter and sugar together and proceeding with the recipe, the butter is cut into the dry ingredients, the flour, sugar, baking powder and salt mixture. It’s easy enough to make by hand; you can pull out a mixer or food processor if you want, but it’s so simple it’s almost not worth dirtying either!

After the cake is spread into the pan (and it does have to be spread, it will be thick) it’s topped with a simple streusel. Since this streusel contains no flour, it doesn’t have a lot of structure; it’s not like the crumbly topping you might see on our standard American coffee cakes like my Classic Coffee Cake with Crumb Topping. It just kind of melts on and into the cake. I always find streusel works best if you start sprinkling it on at the edges and work towards the center.

Then, and here’s what makes the pockets, butter is cut into small cubes, about a  half an inch or so, and sprinkled over the cake. Then the butter is pushed down until no longer visible. Don’t be too perfect with cutting the butter, it’s nice to have some pockets larger and deeper, some smaller. And don’t be too perfect with the distribution of the butter over the top so you end up with a variety of holes and rivulets in your cake rather than something lined up like regimental soldiers. Be sure to butter or spray the bottom of the pan well; some of those pockets of cinnamony, sugary deliciousness will make it all the way to the bottom of the pan as the cake bakes and you want to be able to get the slices out and not have them stick.

This coffee cake is incredibly cheap to make! I priced it at about $1.25, but then that’s with using all sales-priced ingredients. I’ve gotten to the point that I buy all my baking goods, eggs, and butter at Aldi, where the regular prices rival shopping at the grocery store during the holiday sales. If you don’t have an Aldi nearby, stock up on your baking items when they’re on deep sale. Freeze any flour items coming into your house for three days and you’ll avoid any “peskies.”

More and more, eggs and butter are going on sale pretty much around any holiday. Butter though, as it’s getting more and more expensive, is very worthwhile to stock up on heavily during Winter holiday and Easter holiday sales. You’ll find it’s half price on a good sale. Figure out how much your family can use, how many weeks until the next great holiday sale, and buy appropriately. Freeze it; it keeps well for months.

We haven’t talked much lately about shopping for milk. In every area, there are usually stores that have milk at a low. It can be hard to stock up on, obviously, because it’s bulky, especially for families that go through several gallons a week. If that’s you, know which stores have the lowest prices, try to avoid quick trips to the gas station or convenience store where prices are always higher. It’s the smaller ticket items that add up over the course of a year that make an incredible difference in our spending. If you’re buying an additional three gallons a week in quick stops at the convenience store you’re likely paying (and this varies) an extra $1.75 over the grocery store price. That adds up to about $275 a year,

I’ve started making my brown sugar rather than buying. You just mix up the sugar with a little molasses in the food processor, easy peasy and it saves money; making your own is about half the price of buying it at the store and I don’t have bags of brown sugar sitting around and possibly getting hard. See Homemade Light or Dark Brown Sugar.

In a large bowl, whisk together the flour, sugar, baking powder and salt. Drop in the butter, separating as you do. Toss the butter in the flour mixture, then working with a pastry cutter or your fingers, cut the butter into the flour until the mixture looks like sand.

Add the egg to the milk and stir. Add to the dry ingredients. Stir until just combined and moistened. Transfer to prepared baking dish and smooth.

In a small bowl, mix together the brown sugar and cinnamon. Starting at the edges, sprinkle this mixture over the batter in the pan. Shake the pan gently to distribute the topping evenly. Scatter the small cubes of butter over the topping. Press each cube into the topping so they are barely visible.

Bake for 23  to 25 minutes or until the top, on a drier spot, springs back up when gently pressed and the edges are slightly brown. The toothpick test is unreliable for this cake.

Notes: May also be baked in 8 or 9″ round pans; check for doneness a few minutes early and watch carefully; timing has not been tested.