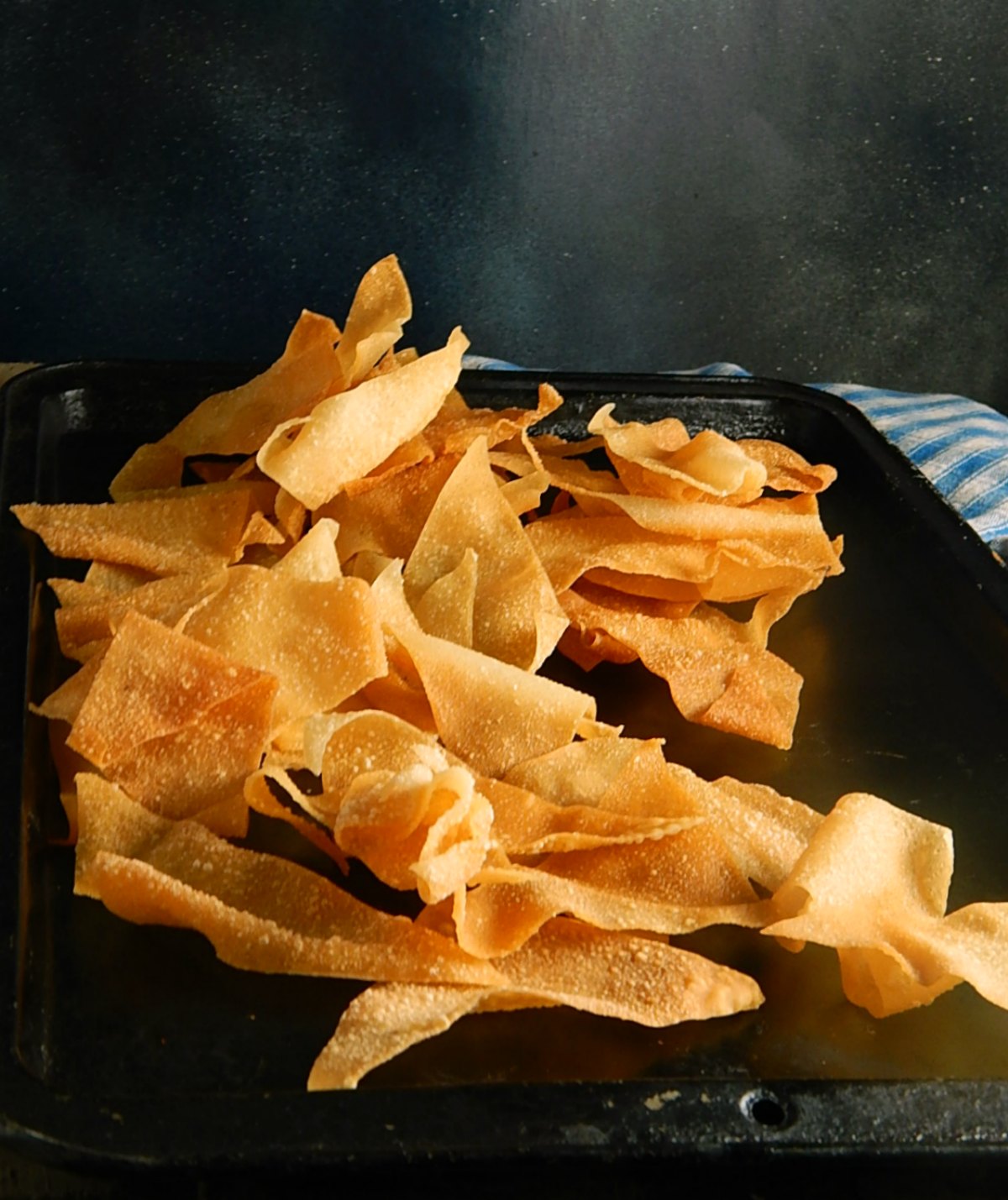 I was just watching TV and saw a cute commercial for Duracell batteries. They were asking if you’d rather have a battery with extra life or extra power and ended up by saying, “Because both is better than not both.” And I thought that just describes my Wonton Chips Baked or Fried served with my Creamy Crab Rangoon Dip.

That Rangoon Dip really is better with these homemade Wonton Chips is a given; after all, they were made for each other. I’m sure there are other dips that would be good with these chips, too. I might have to expand on that idea and find some – but in the meantime, these really are perfect with that dip.

About Wonton Chips Baked or Fried:

Yanno what else these chips are good for? Snacking. Yep, I could hardly leave them alone once they were made! They have such an incredible crunch and a tasty flavor – they’re kinda fun! I don’t know if you can even buy Wonton Chips, but I can’t imagine them any way other than fresh out of the oven or the frier.

There’s one little surprise! Instead of using Wonton Wrappers, I cut down Egg Roll Wrappers. I think the size of the egg roll wrappers, once cut is a better size for a chip. But somehow the name “cut up egg roll chips” doesn’t have the same oomph as “Wonton Chips,” now does it?

In my photos, all the chips were fried, in batches, which I love because they taste better, fry up beautifully and the shape is a bit irregular which makes them great for dipping. They seemed to be a little stronger than baked chips, too. I gave you instructions for both methods, below. I tested a few baked chips that came from the oven but didn’t take a photo of them. I thought I would go back and make more but after having the fried ones, I was kind of done. The oven chips were very flat and the color and texture were a bit uneven.

Nothing could e simpler than making these chips. It’s pretty straight forward. When baking, watch carefully as oven temperature and timing can vary. If you’re frying, paper bags set atop a sheet tray make a great surface to lay the finished chips on.

I always prefer to cut in stacks of several skins using a pizza cutter. A sharp knife works well too; just press straight down for the cleanest, most uniform cuts.

The big surprise is that Egg Roll wrappers cost a bit more than the Wonton wrappers but each wrapper makes 4 times as many. It’s hard to give a statement as to which is actually cheaper. The number of skins in a package and price of the package will vary from brand to brand, and may be different in different locations. When I bought, I determined that the Egg Roll Wrappers were a better deal (and made a better-sized chip.)

I almost always have both wonton wrappers and egg roll wrappers in my freezer. I stock up when I see them on sale during the Lunar New Year. That’s the date of the Chinese New Year and many items at my store are on sale, often unadvertised. Take a peek yourself and see if the same holds true in your area. Both are usually much less at an Asian grocer if you have one in your area.

Wonton Chips Baked or Fried are a great use of any leftover wrappers.

Use a sharp knife or pizza roller to cut wonton wrappers a few at a time, diagonally in half to form 40 triangles. If using Egg Roll wrappers, cut into four squares, then cut each square in half diagonally to form 8 total.

Arrange triangles in a single layer on baking sheets. Lightly spray with cooking spray, carefully turn, and spray again. Sprinkle with salt if desired. Bake in a 375 degrees oven for 5 minutes or until edges are golden brown. Set aside or store in an airtight container up to 2 days.

Pour vegetable oil to a depth of 1 inch into a Dutch oven, and heat over medium-high heat to 350°. Fry, in batches, 15 to 20 seconds on each side or until golden brown and crisp. Drain on a wire rack over paper towels; sprinkle with salt if desired.