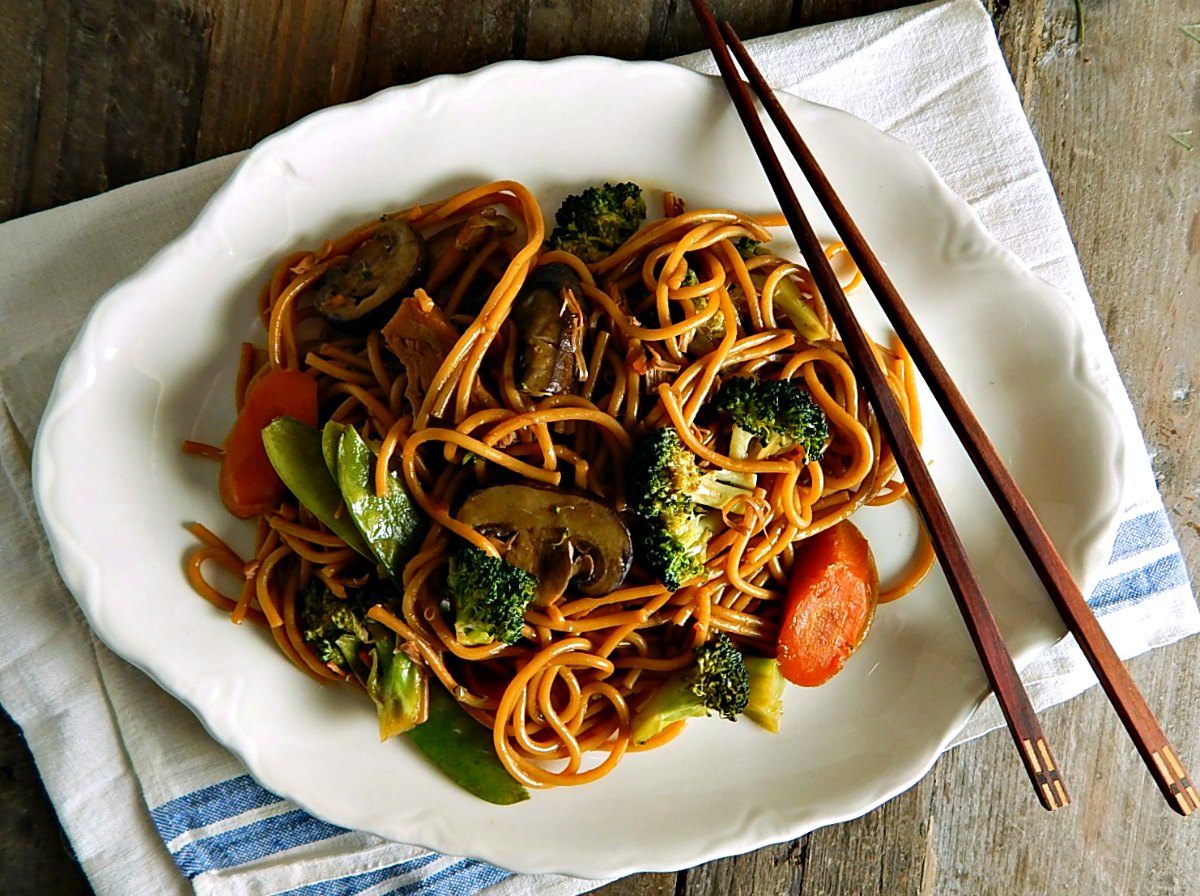 See, making Lo Mein on the stovetop is fast, but it’s kind of a pain. There are the noodles to cook so you need a pot of water to bring to a boil to cook the noodles (and you have to drain it) and you have to watch them closely to get them just right or you’ll have Lo Mein mush. And then there’s the stir-frying which is always fast and furious. It doesn’t take a long time to make a stovetop Lo Mein, but it IS intense time. Wouldn’t it be great if you could dump everything in the IP and push a button? And then walk away and do what you need to do while dinner cooks?

Well, it IS almost that easy, but it turns out making Instant Pot Lo Mein wasn’t quite so straightforward as I initially thought it might be. I don’t think any Instant Pot recipe has given me so much angst. Well, maybe hard-boiled eggs. They rated right up there on my pain in the patootie scale to master, but that recipe is perfected, too. But back to the Lo Mein. Trying to get gorgeous, fresh tender-crisp veggies done in the same pot as the noodles took a bit of finagling.

So my recipe has a little secret. It involves a foil packet. But follow along and your Fast Fresh Instant Pot Lo Mein will be a game changer, made all in one pot and better even than takeout! A big plus is that there is only a bit of sesame oil for flavoring, so Fast Fresh Instant Pot Lo Mein is SO much healthier, and of course, you can customize pretty much everything to your exact taste when you make your own Lo Mein. Keep the sauce the same though, it’s the bomb. The bomb dot com.

Now if you’ve cooked in the IP, you gotta know that the shorter recipes are sometimes trickier than longer ones. There’s little room for error when you’re cooking at three times the speed for just a few minutes. So let’s talk about the components of this Fast Fresh Instant Pot Lo Mein and how cooking them translates to the Instant Pot in a way that’s going to make each part of the Lo Mein shine, the noodles, the veggies, and the sauce.

The first issue I ran up against in my Instant Pot Lo Mein was the noodles. They need a good amount of liquid to cook in. Like way more liquid than you might want in your Lo Mein. So my solution is to take a page from other Lo Mein I’ve made on the stovetop. On the stovetop, I take my very al dente noodles and finish them in the sauce in the skillet.

In the Instant Pot, I do basically the same thing for my Fast Fresh Instant Pot Lo Mein. Cook the noodles just shy of al dente, take the lid off and push the Saute button. Simmer the Lo Mein, stirring often which will break up your noodles (they tend to clump in the IP) and let the noodles absorb most of the tasty sauce. It only takes about two to three minutes.

The noodles come out beautifully and the sauce is absolutely silky and gorgeous. Best of all, there’s no mess in the bottom of the Instant Pot like you might have if you try to cook the noodles all the way through under pressure. Yep, in my Lo Mein experiments, I had a lot of noodles stuck to the bottom my pot. And did a lot of scraping and scrubbing. Aint nobody got time for that! (I also found the best noodles to use are noodles with egg in them; besides being traditional, they hold up better in the IP. And if you use another noodle than spaghetti, cook it for 1/2 the amount of time the box says to cook for al dente.)

When cooking spaghetti in the Instant Pot, break in 1/2 and add in small bunches at right angles.

The Veggies for Fast Fresh Instant Pot Lo Mein & How to Get Them Tender-Crisp:

It turns out that the five minutes it takes to cook the noodles in the IP (remember that’s the five minutes under pressure, not including the heat up and the quick release) overcooks all but the sturdiest of the vegetables. And I wanted a Fast Fresh Instant Pot Lo Mein with beautiful tender-crisp veggies. And I so wanted to find an easy way to make everything in the same pot (that’s the whole point of the IP, right?) so I came up with a workaround.

I divided vegetables into three categories, Sturdy, Delicate and Very Delicate. The sturdier ones are laid in an even layer on top of the noodles and that helps the noodles cook without drying out because those veggies give up their moisture as they cook. The Delicate vegetables are wrapped in a protective foil packet with a tablespoon of water and added last. That foil packet helps protect the sturdy vegetables, right underneath them, too. The Very Delicate veggies or ones that are already cooked are stirred in during the final simmering phase to just heat through. That’s a great time to add any leftover vegetables you’d like to use in your Instant Pot Lo Mein, too, along with already cooked chicken, turkey, beef or pork or tofu.

Make sure to follow the cutting instructions pretty closely because that will affect how the vegetables cook. The foil packet needs to be made out of regular foil; heavy duty foil insulates them too much and they won’t be cooked through at the end. When the pressure is released, check the packet of the veggies and make sure they’re cooked to your liking. If they need a bit more time, toss them into the IP as you do that final simmer.

What Veggies to Use in Fast Fresh Instant Pot Lo Mein:

There are so many vegetable options that can be added to your Lo Mein. I haven’t tried them all yet; so far I’ve only cooked green onions, carrots, broccoli, mushrooms, and snow peas. Based on that, I’m taking an educated guess that the sturdier veggies should be cut a little thicker than normal and the delicate veggies just a smallish bite-size, so take the below as a guideline. If you make my Fast Fresh Instant Pot Lo Mein, I’d love to hear about what veggies you’ve used, how small or large you cut them and how they turned out!

Sturdier Vegetables (place on top of noodles and cover with foil pack):

Very Delicate Or Already Cooked Vegetables (stir in during the final simmering):

Instant Pot Lo Mein, my broccoli and snow peas cooked beautifully in the packet. Use water, though, not sauce

In this particular Fast Fresh Lo Mein recipe, I add in already cooked protein, about a cup and a half of chopped or sliced chicken, turkey, beef, or pork (or firm tofu) to the Instant Pot during the final simmering, just to heat through. Or if you’d like, smallish raw shrimp can be added, and are small enough that they’ll cook through during the simmering process. I made this particular Lo Mein with leftover Thanksgiving turkey.

If you would like to cook your protein just for this recipe, you can simply saute it with a little oil until done or marinate it, as I did in my recipe for Steak Lo Mein, then saute it. While using any leftover meat makes the Lo Mein much faster, if you’re starting from scratch and cooking it, you do have the chance to inject a little more flavor with the marinade. Either way is a win/win as far as I can see. 🙂 I haven’t yet added any raw protein to my Instant Pot and cooked it through with the noodles and veggies; I’ll update you if I do.

Mix all ingredients and set aside.

Spray bottom of Instant Pot liner with cooking spray. Break spaghetti noodles in half and add in several layers, each layer at right angles to the previous layer. Add water and sauce ingredients to the instant pot. Do not stir but push down or spread out any noodles that are sticking above the sauce. It’s ok for the very top of the noodles to be just even with the liquid. Add carrots and mushrooms in an even layer (as possible) on top of the noodles; try to make sure the noodles are covered as best as possible by the noodle layer.

Make a foil packet for the more delicate vegetables: Place the broccoli and snow peas in the center of a piece of foil. Add a tablespoon of water and fold foil around the vegetables to form a packet, sealing tightly. Place packet on top of carrots and mushrooms.

Seal Instant Pot and set for High Pressure for 5 minutes. (It will take a few minutes to come up to pressure; be patient.) Immediately Quick Release when finished, remove the lid and press the Cancel button and then press the Saute button. The noodles will still be stiff and there will be quite a bit of sauce. Open up the foil packet to determine if vegetables are done to your liking. If they need more time, add them to the Instant Pot to finish off in the next step. Add cooked turkey to the Instant Pot.

As the contents of the Instant Pot comes up to a boil, stir with a large spoon, breaking up any clumps of noodles, making sure to turn over everything that’s at the bottom of the pot. Continue to simmer, gently stirring as needed until the noodles are at the desired doneness and sauce is mostly gone, two to three minutes. The noodles will continue to absorb more of the sauce as they sit. Add in the vegetables from the packet if they haven’t already been added.

Note: This recipe has only been tested in a 6 quart Instant Pot using exactly 8 ounces of noodles (half the box) and the exact amount of liquid. Changing those proportions may change the outcome.

I’ll be sharing my Fast Fresh Instant Pot Lo Mein at Fiesta Friday #252, and the co-hosts this week are Alex @ Turks Who Eat and Zeba @ Food For The Soul. Stop by and check out Fiesta Friday and Alex and Zeba’s sites; you’ll love them all!