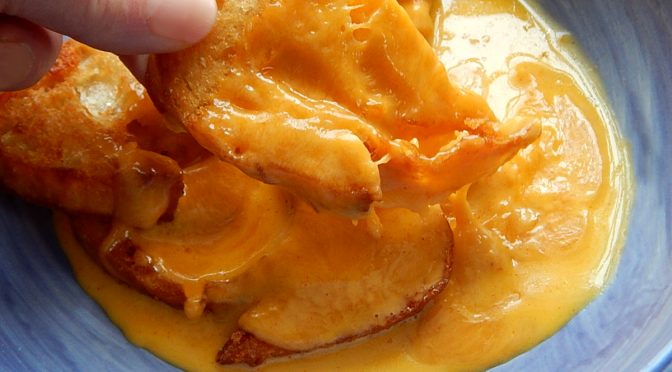 Let’s talk about Dad’s Traditional Welsh Cheese Rarebit. On a rare occasion when we were children, my Dad would cook for us. It was kind of a big deal, always on a Saturday, and probably always when Mom was gone, maybe running errands or something. It was a novelty, but really the reason we kids remember it was because Dad made it fun. Like an adventure.

We’d all be right on top of him in the kitchen, waiting in anticipation, probably something that Mom wouldn’t have allowed or encouraged. So now that we’re adults, the subject of this Dad’s Traditional Welsh Cheese Rarebit has come up a few times in family discussions. When I made it for my Dad, he told me it was a recipe my Grandma made often; Dad wasn’t sure if it had been passed down the Scottish side of the family or if this is one my Grandma Carmelita seized upon during the Great Depression as a way to stretch their rations. Dad was born in 1931, towards the beginning of that major economic downturn.

So at any rate, Dad picked it up from my Grandma and made it for us kids. I actually remember my Dad went through several iterations of the recipe; at one time he even tossed everything in the blender before heating. I think when we were very young he used milk but later on, beer. I’m betting Grandma Carmelita didn’t use the latter!

For a classic recipe with very few ingredients, there are a lot of ways to make Cheese Rarebit, and like so many traditional recipes you can find many discussions, including this one from Wikipedia, which at least has some history and footnotes,  about the dish. They almost all start with the name, so I’m not going into that other than to say the dish is pronounced Rabbit and there is no Rabbit in it. (Although if you follow me, you’ve probably heard about all my rabbit issues, and being a cook, it’s occurred to me that maybe I should develop a taste for the little critters!)

And of the ways to make cheese rarebit, it all really comes down to toasted cheese. Sometimes it’s just cheese, bread, and mustard, toasted, but usually, it’s a sauce that’s poured over bread and then toasted. Now that sauce can be made with beer (ale) which accentuates the cheesy taste or made with milk, most likely in a the form of a Bechamel or White Sauce, which makes it creamier. We never toasted ours and never served ours over bread. As Dad made the rarebit, our jobs were to lay out saltines on our plates, ready to be sauced. Mine were always arranged with precision. One in the center and one on each side, for five total. These days, I serve over a good bread.

This recipe is very simple and very straightforward and has most of the classic ingredients. First and foremost, you want a good Cheddar cheese. The mustard comes in the form of mustard powder, one of the items in what I call my Top Secret Super Stealth Arsenal of Ingredients post. You’ll see i use it a lot in recipes; prepared mustard just isn’t the same. The Worcestershire sauce is in a lot of cheese rarebits, although that must be a newer addition; it came on the scene in 1835. And as for the beer, use any kind you wish but a good Ale would really be in keeping, here. Maybe you want to see 30 English Ales You Must HAVE Before You Die. (And I thought I was dramatic, lol!)

There’s nothing to making the rarebit. It’s a mix and heat kind of thing, but if you’ve made many recipes with melted cheese, you know it can get grainy in a heartbeat. And if you haven’t made many recipes, well, I’m tellin’ ya now! Heat it slowly over low heat and don’t make a bit deal out of it. As soon as it’s melted, take it off and keep stirring for a minute so the hot pan doesn’t scorch it. Done.

Then serve as is over a hearty bread (or saltines) and toast under the broiler or not as you desire. And just for a minute, enjoy that moment of tasting melty cheese and bread and know that at least in your little corner of the world, all is right.

Good cheese can be pricey and sometimes hard to find, and a good, dry Cheddar is important in this recipe. Dad used Cracker Barrel, probably the best cheese available in our small Iowa town in the ’60s. You can pick it up at most groceries and there might be coupons. It will do very nicely.

I’ve found some decent budget cheddars at Aldi (yes, really) and Costco, but selections are sporadic. Then, of course, there are the Trader Joes if you have one nearby. And I’ve made this often enough with a plain grocery store sharp Cheddar (they’ve gotten better) to know that’s not a bad way to go. Some people (especially children) don’t appreciate too much sharpness. It’s interesting that though this used to be considered a budget meal, even grocery store cheese in my area on sale is around $4.00 a pound! Not so budget maybe, when I can pick up sales priced chicken breast or 99 cents a pound. But it is very easy and very enjoyable!

Serve this over any hearty, toasted bread, maybe my No-Knead Overnight Bread? When we were kids, we always had it over crackers. This recipe as is fine for two adults and smaller children, but increase it if serving anyone with a heartier appetite.

A very traditional, cheesy Welsh Rarebit, made with beer or milk.

Add the cheese, Worcestershire sauce, mustard, cayenne, and flour to a medium-sized saucepan. Mix well. Add 1/2 cup beer (or milk) and mix together.

Stir over a very low heat until just melted. Add more beer or milk if desired. Remove from heat and continue to stir for a minute. Let cool slightly (mixture will thicken) and pour over the toasted bread.

If desired, place the Rarebit covered toast under a broiler until bubbly and browned.

Don’t overthink or overheat the Welsh Cheese Rarebit. As soon as it’s melty take it off the heat. It will seize up and get grainy if overheated.

Welsh Rarebit is best used at once and is tricky to reheat. Reheat on the stove, very slowly, and as the mixture gets a little liquidy around the edges, remove the pan from the heat and whisk it. You might need more liquid.

I’ll be bringing this recipe to Fiesta Friday #216, The cohosts this week are Petra @ Love Food Eat and Zeba @ Food For The Soul.