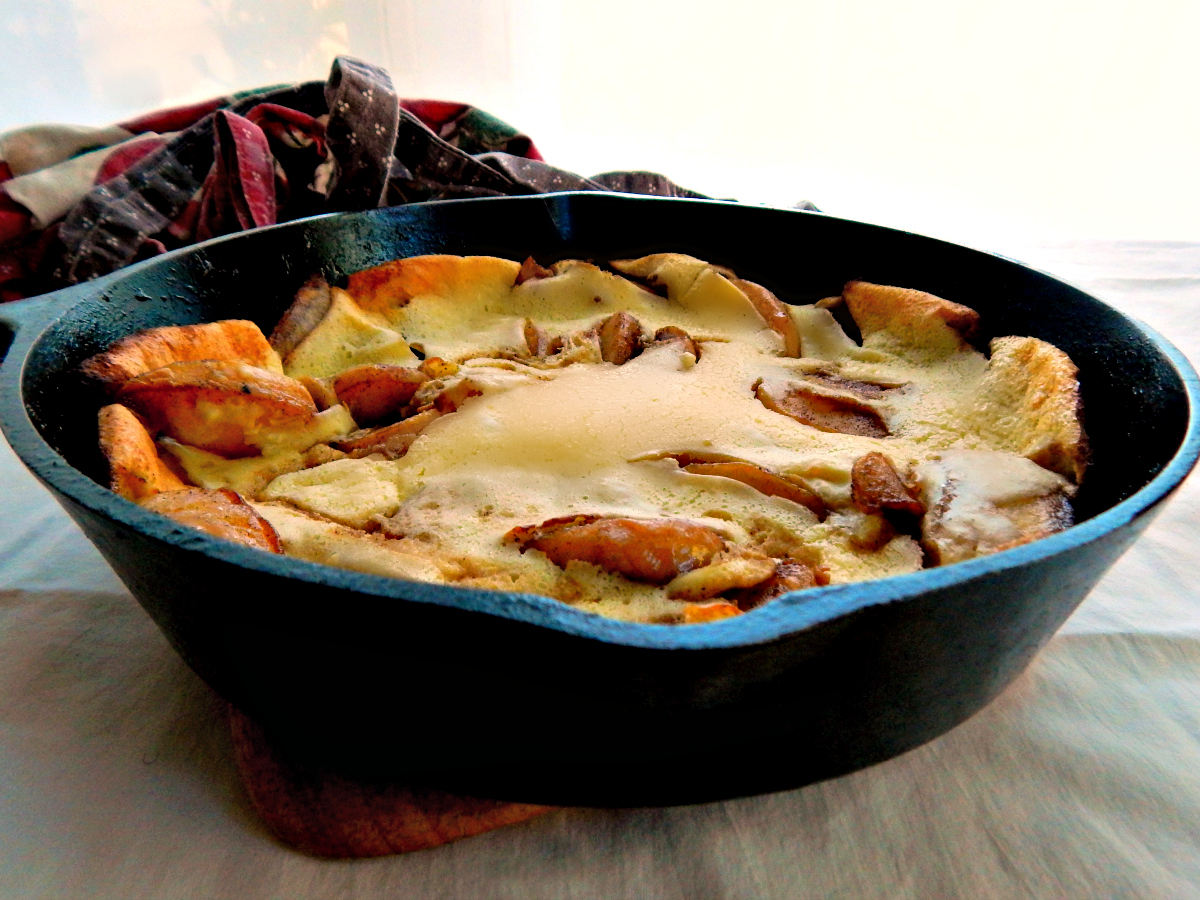 It’s no secret that I’m not a morning person. And I’m really not that into much breakfast food. So I’m not likely to be standing around the stove flippin’ pancakes at 7:00 a.m. No flippin’ way! But there are some breakfasts I can get behind and this Apple Oven Pancake is one of them.

I think this originally was a Cook’s Illustrated Recipe – I think they called it a German Pancake. I’m not sure that it falls in line with other German Pancakes I’ve made in the past, like my “Big Apple Pancake” (coming soon) but it is really good, substantial and perfect for fall!

Best of all, it’s all soft and custardy inside and has a little caramel apple gooeyness going on along with a bit of crunchy caramel on the edges… I’m showing it here with syrup, but frankly, that’s overkill. Maybe a dusting of powdered sugar would be more appropriate.

And guess what? It’s the perfect thing for brunch, too. Now Brunch. There’s something I can really get behind. A lazy weekend morning. People sitting around drinking coffee and reading the paper. Robes and slippers. Sounds idyllic to me.

The only way it could get better would be if someone served it to me – maybe not in bed, coz that could be a bit messy.

It’s easy peasy to make, too. 🙂 I turned it out of the pan, but next time, I don’t think I’ll bother. It looks so cool top up and the turning over of hot pans full of molten hot caramel is always a bit of drama I’d rather not worry about before noon…

I thought mine was just a bit dark, so I adapted the recipe a smidge to adjust. Just watch the edges closely. Really the only potentially pricey ingredient is the half and half. When comparing half and half to cream, it really should cost 1/2 as much to make it worth-while to buy, especially if you normally have milk on hand. Any tart apple will do here.

In a 10-inch skillet that can handle the oven heat, heat butter over medium heat. Add apples. Cook, stirring frequently, until the apples have begun to soften, several minutes. Add brown sugar and cinnamon and continue cooking until apples and sauce is just golden brown. Take the skillet off the heat and add the lemon juice.

In the meantime, whisk flour, sugar and salt together in a medium bowl. In a second bowl, whisk together the eggs, half-and-half and vanilla or rum. Add the liquid ingredients to the dry and whisk until no lumps remain.

Quickly pour the batter over the apples, pouring around the outside edges first and then filling in the center. Place the skillet into the oven. Reduce oven temperature to 425 degrees (or if using cast iron, keep at 425) and bake until the pancake’s edges are puffed and are nicely browned, about  15 – 18 minutes. Turn pan halfway through cooking time.

Remove skillet from oven and loosen the pancake’s edges with a spatula. Invert onto a serving platter, sprinkle with powdered sugar, cut into wedges and serve.

I’ll be sharing this at our very own Throwback Thursday Link party, hosted by Quinn, Alli, Carlee & Meaghan. Click the link to check out our blogs & rules or just click the blue froggy, below.

I’ll also be sharing at Fiesta Friday, hosted this week by Antonia @ Zoale and Sandhya @ Indfused. That will be some great party, I promise!!