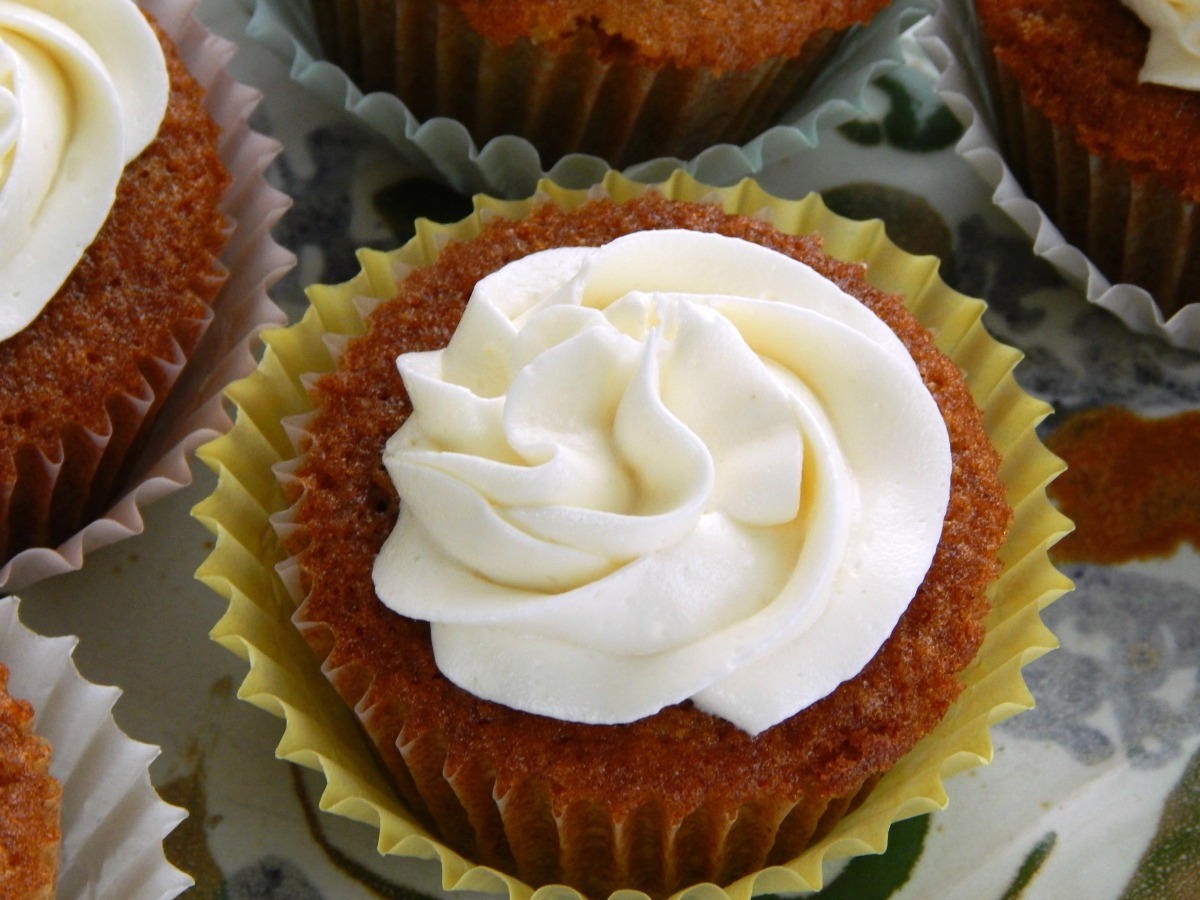 Do you have old family recipes that just take you back to childhood? Maybe it’s a photo, maybe it’s the first whiff of them baking in the oven, or maybe it’s that first bite? This is one of those for me…my Grandma’s Applesauce Cupcakes.

These are one of my Grandma Irene’s recipes, straight from her box, and one of my most treasured recipes. Her Apple Cake is pretty darned, good, too, btw! That’s like a sticky toffee pudding and has a Caramel Rum Sauce. (Go, Grandma!!) You might want to check that recipe out, too.

The spicing in Grandma’s Applesauce Cupcakes is gentle; just the faintest hint of nutmeg & clove, but no cinnamon, and the apple flavor shines through. A friend from Ireland told me once that a lot of old Irish recipes didn’t use cinnamon, and Grandma Irene was as Irish as they come, so it always made me wonder.

Grandma’s Applesauce Cupcakes are also super moist. These are not a light, airy cupcake; they’re just a bit dense and rich and perfectly moist and that makes them super delish. This isn’t one of those recipes that was converted in the anti-fat craze at the end of the last century to use applesauce in order to make the recipe low-fat. This is an honest to goodness Old Fashioned Applesauce Cupcake.

I love that these cupcakes are fantastic to eat, just as is, with no frosting at all, and usually, that’s how I make them about 90 percent of the time. They bake up absolutely flat on the top, though, so they practically scream out to be frosted, so I did today. I couldn’t help but think about the Ermine Buttercream frosting my Mom used. It’s always been a favorite and goes perfectly with the cupcakes. A Cream Cheese frosting would be good on these, too, but depending on the frosting recipe and how heavy the cream cheese flavor is, might dominate in flavor.

Grandma’s original recipe, as you can see, called for shortening, so I’d guess this recipe dates back to the 1920’s or 30’s, which makes sense. Grandma was born in 1896 and married in her 20’s. That means she baked in an era when refrigeration was iffy and people were using ice-boxes and shortening ruled. Converting shortening to butter is never a one to one conversion; you’ll need a little more butter. The rule of thumb is, when substituting butter for shortening for every 1 cup of shortening in a recipe, you will need to use 1 cup plus 2 tablespoons butter. So I put the right amount of butter in the recipe.

Most people I know would rather not use shortening, these days, and I’m pretty much a butter girl all the way with just a few exceptions. Snickerdoodles for one, because you’ll never get the classic texture and proper wrinkling with butter and my Grandmother’s Pumpkin Bread for another. That Pumpkin Bread, of course, is another one of Grandma Irene’s recipes and it’s so good as is I’d never dare tinker with it! Other than that I generally update the old recipes.

This recipe follows a pretty standard creaming method. Add raisins or dates if you want, or nuts if you want or leave one or the other or both out. The cupcakes are fantastic regardless.

Since I have an Aldi nearby, I generally pick up all my baking goods there; their everyday prices are usually as good or better than the sale prices at my regular grocery. If you don’t have Aldi, try to stock up during holiday sales, especially the big baking holidays like Easter, Thanksgiving, and Christmas.

Butter can be frozen and keeps well for months, and whenever I bring any type of flour or flour product into the house I freeze it for three days. That eliminates the possibility of any “peskies” being brought into the home.

Dried Fruits & Nuts generally have the best sales prices between Thanksgiving and Easter. Nuts can be frozen and if your dried fruit is in flimsy packaging, repackage them in a Ziploc. Applesauce is usually at a low in the fall. The harvest is in and has been processed, the warehouses are full and the producers want to move at least a good portion of their product quickly. If you eat applesauce regularly, stock up. Seriously. Figure out how much applesauce you go through in a year and buy it at the lowest fall sale prices.

Cream fat and sugar together. Add eggs, one at a time, mixing well after each.

In another bowl, sift together (I just put in a bowl and whisk) flour, soda, cloves, nutmeg. Add in raisins or dates and nuts if using.

Fill lined muffin cups about 2/3rds full (I used 1/3 cup scoop) and bake for 20 to 25 minutes until top springs back when gently touched.

You know I’ll be bringing Grandmas Applesauce Cupcakes to our Throwback Thursday #31 Link Party, hosted by Quinn of Dad What’s for Dinner, Meaghan of 4 Sons are Us, Alli of Tornadough, Carlee from Cooking with Carlee and Moi! That’s right – me!

Of course, I can’t miss bringing Grandmas Applesauce Cupcakes to Fiesta Friday #112, hosted by Angie and co-hosted this week by Natalie @ Kitchen, Uncorked and Hilda @ Along The Grapevine. Wow, 112 consecutive weeks!