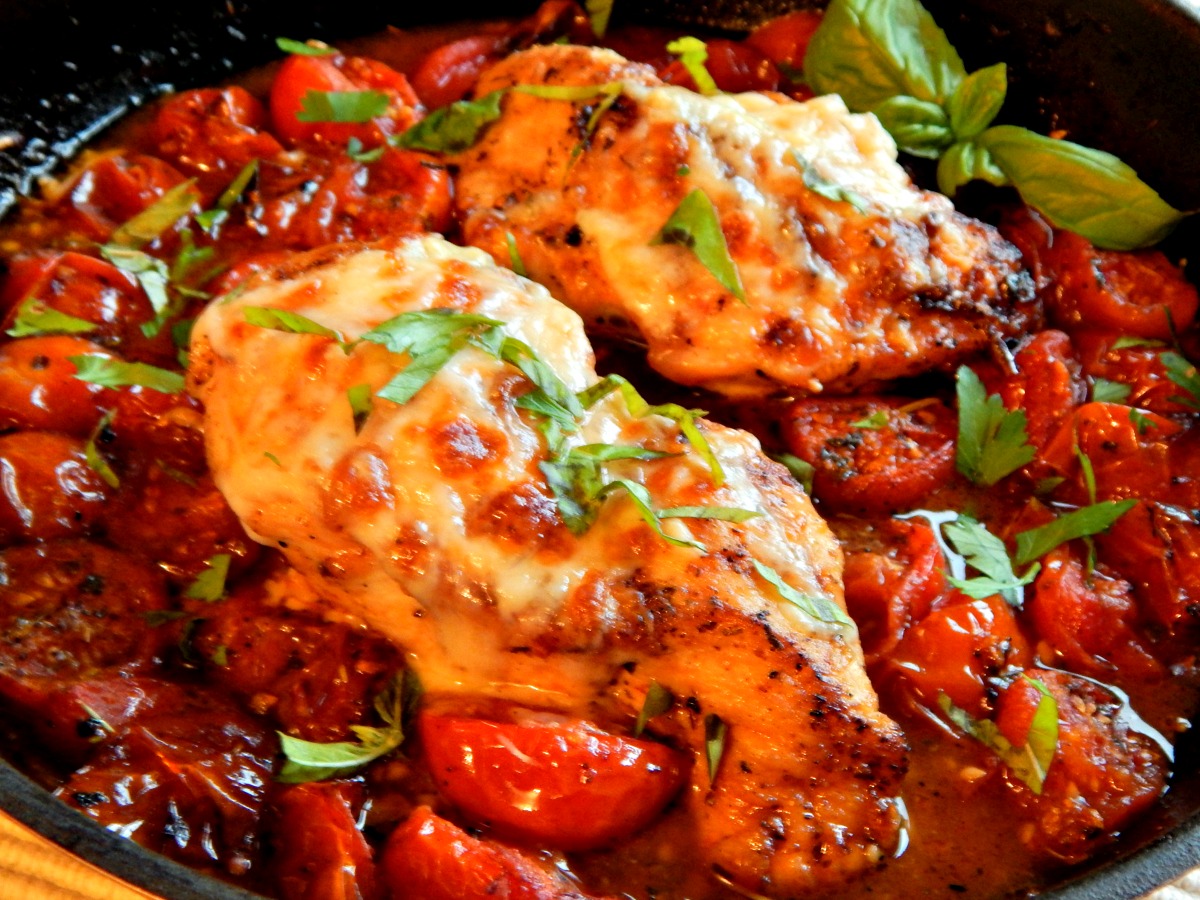 Chicken Italian, cheesy with tomatoes, at it’s most basic is a five-minute toss together weeknight save. Modified just a bit, and it’s a fantastic dinner. Add in a few gourmet ingredients, and you have a company dish. Best of all, each version takes just a few minutes and all are a one pan meal!

As the kids have transitioned off and asked for their favorite recipes, I’ve realized that they don’t always have everything they need to make them. Nor do they always know how to “shortcut” methods or change out ingredients successfully, especially the less expensive for the more expensive.

I hope this post will help them and others in evaluating some of the steps in cooking so they can “get” what’s important in a recipe and what can be skipped if necessary.

If only we could all be born knowing everything we needed to know, and then just slowly lose it instead of the other way around!

Note on the recipes: The timing is for 6-ounce chicken breasts. Chicken meat needs to be cooked to 165 degrees, and if using different sizes, the cooking time may vary. Either use a thermometer or be prepared to use the “nick” method – Cut into the largest breast to make sure it is done all the way through. FYI: a little drizzle of Balsamic Vinegar over the tomatoes when the pan is fresh out of the oven does wonders with any of the versions.

And this is very good. Super simple, the recipe for Easy Baked Chicken Italian (above) takes about five minutes to throw together, 40 to bake and one dish to bake it in. A spoon, chicken, salt, and pepper, 2 tablespoons of olive oil, a 15 ounce can of fire roasted tomatoes, a heaping tablespoon of flour, 1 cup grated cheese like Mozzarella and optional fresh herbs. And if you use fresh herbs, it’s handy to have a knife to cut them with. 🙂

The can of tomatoes, flour, and olive oil are mixed in the casserole dish, the chicken is salted and peppered and laid on top. Bake for about 35 minutes at 350 degrees, add cheese and bake five more minutes. Top with fresh herbs, if desired.

This slightly fancier version (shown above) takes minutes longer to make, but is a bit more work (the chicken is dredged in seasoned flour and sauteed, the recipe uses fresh cherry tomatoes and a mixture of cheeses) and you’ll need a little more equipment.

You’ll need a plate, 1/4 cup of flour, Italian seasoning, salt & pepper, garlic powder, a saute or frying pan that goes from stove top to oven, chicken, cut up tomatoes or cherry tomatoes cut in half (from 8 ounces to a pint, depending on how many you’d like) and a knife to cut them with, a spoon, olive oil, a touch of water, a blend of cheeses, 1/2 to 1 cup (combined) of grocery store mozzarella and a bit of Parmesan, and unless it’s pre grated, a cheese grater, and fresh herbs, still optional.

Instead of being combined in the pan, the breasts are seasoned, sprinkled with garlic powder, dredged in flour combined with about a teaspoon of Italian seasoning, sautéed, then removed.

The rest of the ingredients (except cheese) are added to the pan to cook for a moment. Sprinkle a little Italian seasoning over the tomatoes and a little garlic powder (or use fresh garlic, 2 cloves, minced.) A touch of water, maybe two tablespoons or so, keeps the tomatoes from burning. Add the chicken and bake for only 15 minutes at 350 instead of 40.

After 10 minutes of time, add the cheese, turn the oven up to broil for about five minutes until the cheese is browned and bubbly. (You may wish to move the oven rack up a bit to broil.)

The third version, the “goodest” one is cooked just like the 2nd, but in this case, it is the ingredients that are upgraded just a little more. It’s pretty much the same as version two, with the addition of Artichoke hearts, a “glug” of wine, white or red instead of the water, a few olives, better cheeses and a pinch of red pepper flakes.

The plus side is using a better cheese allows one to use just a little less – we like Asiago mixed with Parmesan. Fresh Mozzarella makes a gooey, decadent dish. Slightly more sophisticated and much more flavorful, this is really a restaurant quality dish.

Put Your Own Spin on it:

While it would be impractical for me to always cook three different recipes for one blog post, this has been a fun concept for me. I often talk about variations, shortcuts, and improvements in my posts under a section towards the bottom of each post called “Put your own Spin on it” but a picture’s worth a thousand words!

In this case, part of the food is going home with Child number 2 and his roomie. I’m happy to send the results of today’s experiment home with the “yunguns” along with a jar of my homemade Italian seasoning, and I’ll send it right in the casserole I baked the “good” version in. That way they can make their own “Good” version whenever they want.

By the way, all three dishes would be lovely with Roasted Broccoli, Pasta, and a green Salad. A loaf of Crusty Bread wouldn’t hurt, either. The “good” version would be the most inexpensive to make, the “gooder” a little more, but even the “goodest” is not very expensive, especially if it is made with sales priced ingredients.

Easily Cut Cherry Tomatoes, Grapes, Olives, Etc. Simply place the lid of a yogurt, sour cream container, etc. upside down (lip up) on the counter, fill with whatever round objects you want to cut, place another lid lip down, press gently but firmly and slice horizontally through the center.