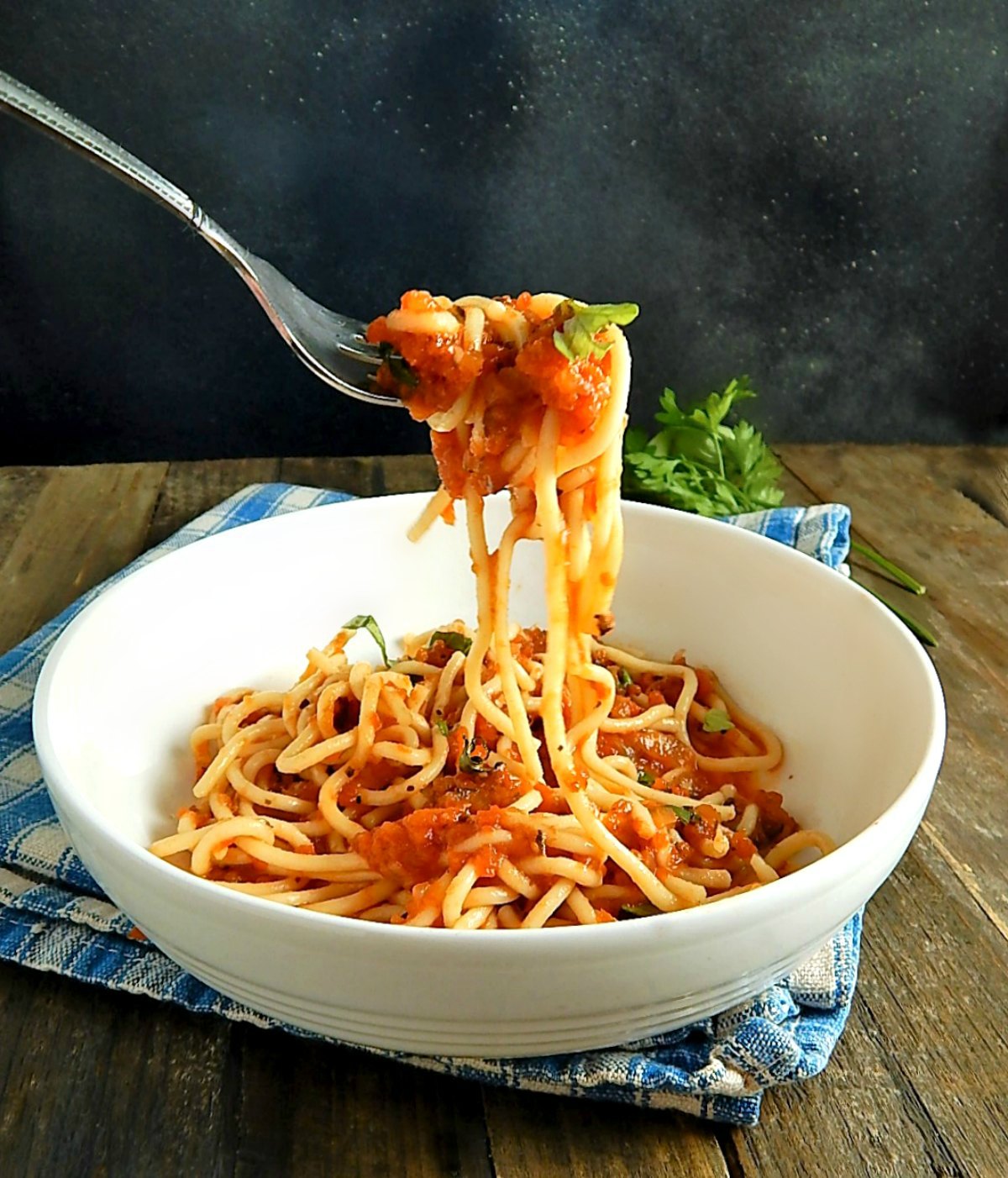 It’s 2019 now and I decided it was high time I updated this post for Cook’s Illustrated Quick Marinara – I first posted this recipe in 2012, long before I knew much about running a blog at all! And here it is years later and I have only scratched the surface. In the meantime, carbs fell out of fashion, the world of cooking has exploded and now it seems, carbs are rising again in popularity.

Regardless, Cook’s Illustrated Marinara has stood the test of time, at least at my house! I just made it again, today, for a quick dinner for the kids (my son Kraig, who would have been a teenager when this was first posted and is now a young man, and his girlfriend Tweety). Who would have thought the years would fly by so quickly! I do have to give a shout out to another CI recipe that’s also a fave, Simple, Quick Italian Tomato Sauce. That’s the one where the onions are grated just in case you’re looking for that recipe and landed on this page.

Speaking of quick, is it a weird transition to mention now how quick this easy but quirky marinara sauce is? And how delicious? It has just the right amount of garlicky, herby zestiness, you want, a rich flavor from deeply caramelized tomatoes, a touch of wine that gives it a deep backbone. Then the quirkiness: just before it’s done, a few reserved tomatoes are added in. It tastes so fresh, you’d never guess it was built on canned tomatoes! Only after it’s cooked is it run through the food processor, leaving this sauce the perfect combination of saucy and chunky!

Of course, you’re not limited to serving Marinara over pasta. It’s a classic sauce, and a simple one and there are literally hundreds of ways to use it.  Marinara can be used in classic dishes, it can be built upon for more complex sauces and of course you can use it anywhere you’d normally want to use a jarred “spaghetti” sauce, although this is so much better than any jarred sauce you’ll find. Try this once and there will be no going back. Here are just 50 ways to use a Pasta Sauce, from the Food Network if you’d like some inspiration.

Did you know the first marinara sauces were more like a salsa? There’s a debate on how the recipe came about; from the Italian ‘alla marinara’ or ‘sailor style’, it was named after the sailors. Was it because it is made from ingredients carried by ship from the New World or was it named for housewives, who upon seeing the ships pull in, rushed to make a quick sauce so the sailor would have something to eat as is so often speculated? Some think it was because fishermen used the sauce over seafood. Or was it named, as I believe, because mariners brought the salsa like preparation to Italy, having experienced something similar in their travels? Honestly, if my sailor was returning, the last thing on my mind would be tomato sauce – okay, I’m trying to keep it B rated here!

I think I saw someone mention once that this sauce takes about an hour. If I’m on my game, I can knock it off in about 40 minutes, especially since I love this on the fresher side. It’s perfect for a weeknight dinner! Just dump some oil in a pan, toss in the onion and while that’s cooking, drain and prepare the tomatoes, gather the rest of the ingredients and the food processor or blender.

Since this makes about four cups, it’s perfect for a family. Sometimes I double the recipe but it does take longer to reduce and thicken and will need to be processed in batches. Still, it’s nice to double and then freeze half.

One of my favorite, always on hand, pantry items is whole tomatoes. I rarely buy any other kind unless a recipe calls for something else and it’s very particular. I just think they’re the most versatile and can be crushed or diced as needed. Generall the larger cans are the least expensive (when compared per pound) so often use what I need from a can and label and freeze any excess.

Stock your pantry when they’re at a low, generally about once a quarter and you’ll always have sales priced tomatoes for your recipes. Make sure to find a use for the leftover juices from the tomatoes that aren’t used in the recipe – you’ll have a cup to a cup and a half. Maybe freeze for meatloaf, soups, etc., or doctor up for a Bloody or Virgin Mary. The juice, imho, tastes a bit “tinny” so I prefer it when something is added if I plan to drink it.

I don’t use expensive wines to cook with, but I take more care when something is simmered and reduced for a long time – use an inexpensive Chianti or Merlot here. Kee your eye open for bargain wines; my last wine was bought at a gas station while driving through Iowa – I  picked up several bottles of Yellow Tail for $2.75. Who knew you could buy wine at a gas station!

You’ll be transported to Italy!

Heat olive oil in large skillet or Dutch oven over medium heat until shimmering. Add onion and cook, stirring occasionally until softened and golden around edges, 6-8 minutes. Add garlic and oregano and cook, 30 seconds or until fragrant.  If using dried basil, add it now.

As the onions cook, pour tomatoes and juice into strainer set over large bowl. Open tomatoes with hands and working over a strainer, remove, any seeds and hard areas from the stem. Place each tomato as it is finished in a bowl, and when all are done, empty out the seeds and waste from the strainer and add the tomatoes from the bowl, along with any juices, back to the strainer. Let tomatoes drain excess liquid, about 5 minutes, pushing the tomatoes around a time or two to facilitate draining. Remove 3/4 cup tomatoes from strainer and set aside. Reserve 2 1/2 cups tomato juice after stirring.

When onions are finished and the garlic and oregano and basil, if dried, are added and have cooked for about 30 seconds, add tomatoes from strainer and increase heat to medium-high. Cook, stirring every minute until liquid has evaporated and tomatoes begin to stick to bottom of pan, 10-12 minutes. Add wine and cook until thick and syrupy, about 1 minute. Add 2 1 /2 cups reserved tomato juice and bring to simmer; reduce heat to medium and cook until sauce is thick, 8-10 minutes.

Serve over pasta or toss freshly cooked pasta with the marinara, garnish with fresh herbs if desired and serve, passing Parmesan cheese.