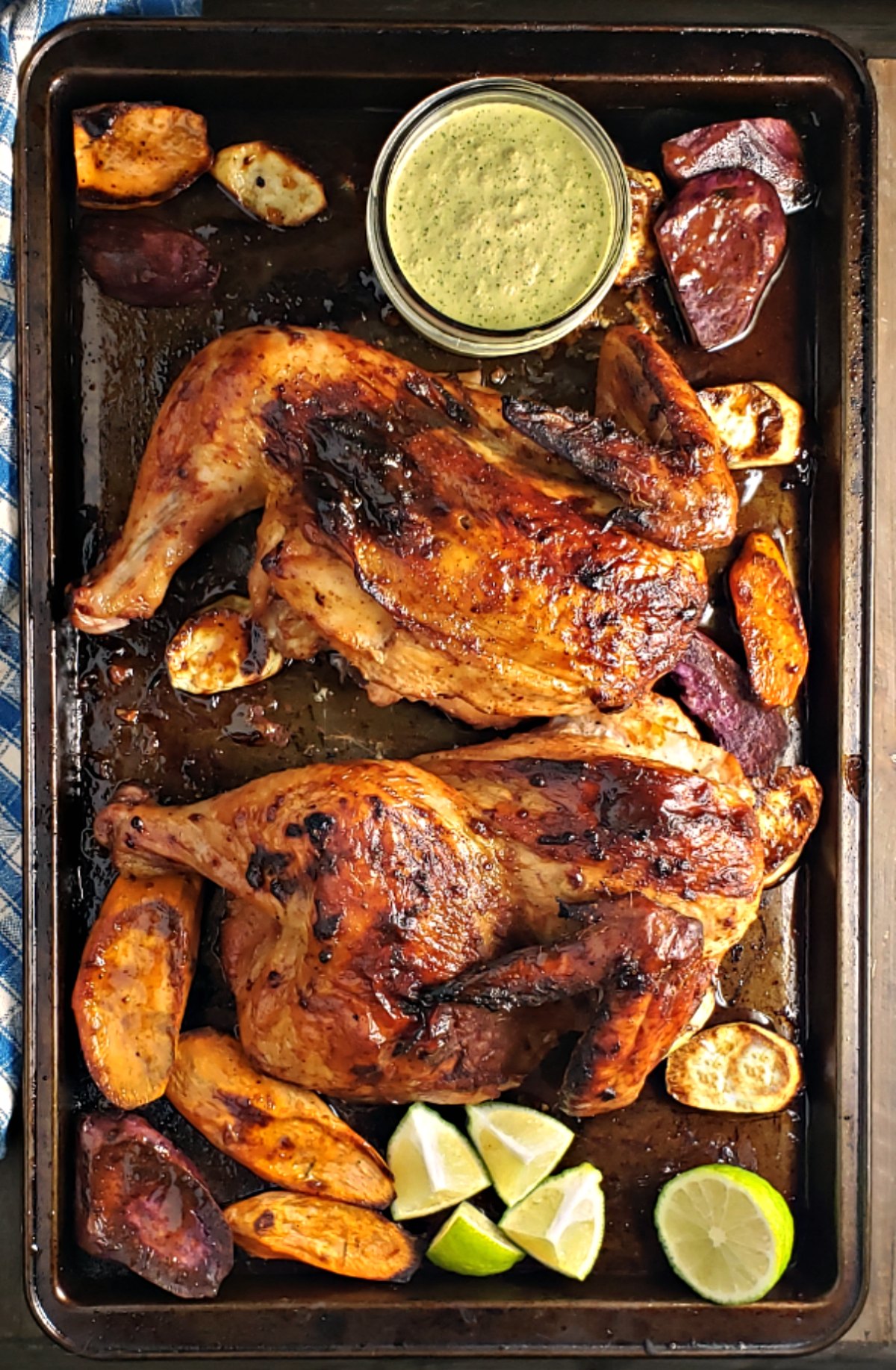 Sometimes I wish I were a sample person at Costco, except I’d sneak out samples of this Peruvian Chicken with Green Sauce instead of whatever was supposed to be coming out of my little oven. It’s just that I wish everyone could at least have a taste of it! But then, if you make this, you can!

It’s been a long time since I put out a recipe that was so good we started out all refined with nice slices on a plate and ended up just kinda going at it towards the end, passing around the sauce as we cut, pulled, ripped or tore the rest of the chicken with that crispy flavorful skin off the bone and tried to scrape up every bit of sauce out of that little jar…and luckily there was more of that sauce in the kitchen. Otherwise, I seriously would have gotten up from the table and made more!

About Peruvian Chicken with Green Sauce:

Actually, the last time I made a recipe like that was when I made Momofuku’s Bo Ssam. But maybe the best way to “sell” this recipe to you isn’t to describe our wholesale animalistic gluttony, lol! Seriously, though this was a casual and fun dinner and to tell the truth, that gluttony was probably bound to happen coz I just tossed everything on the sheet tray and brought it just like that to the table. And it DID start slow, just about the time we thought dinner was finished, with the first person saying, “Ya know, I just have to have a bit of that piece there with that crispy bit on it…”

I really have been getting casual lately and half the time I think I’m lucky to even get dinner out, let alone pull out platters and wash them. (And then wash them again before they’re put away!) This recipe absolutely fits that super cazh (does that make it sound cooler, cazh?) super easy one sheet pan meal vibe. But it has some cache about it, too and would def make a cool company coming over kinda dinner. Maybe on a platter, lol!

I’m all about the drama and I think some of the drama in this dish comes from Spatchcocking the chicken, which is really the only part of the recipe that takes any effort. And when that drama is basically “free” and nothing but a bit of effort, I’m down with it. If you want to use chicken quarters instead, though, go for it! Directions for the quarters are in the recipe; basically they just cook for a little less time.

The chicken is fabulous with flavor for days but it’s really flavors that anyone would fall for. The sauce, though, brings it all home. It’s creamy, spicy, sharp and surprising deliciousness. If you’ve eaten at restaurants that have served Peruvian Chicken, I’m sure you’re nodding right along with me. If not, may I introduce you? And btw, that sauce is something that’s different everywhere you eat it. There’s lots of room for the subbing in of ingredients and/or tinkering to your taste, and using what’s available in where you live.

I served this up with Sweet Potatoes that I roasted right along with the chicken; I had several colors and just tossed them on. They cooked right up in the juices and were so delectable, although next time I’ll pay a little more attention to them; some were a bit on the charred side, not that we even cared by the time we were bickering over the last bit of the chicken & sauce!

Here’s the Green Sauce with my Peruvian Soup

The absolutely hardest part about making this dish is spatchcocking the chicken; everything else is a piece of cake!

If you’d rather not spatchcock, you can just use chicken quarters or if you have a butcher who will do it, that’s a huge help. I can be such a spaz in the kitchen and if I can get through it, so can you. For me, it’s always kind of a wrestling match and it’s an ugly thing to see, I think I maybe even caused a deformity on my chicken; either it was that way when I got it and I didn’t notice or I somehow turned one of the legs around in the throes of my spatchcocking session!

Spatchcocking if you haven’t done this, is just cutting the backbone out of the chicken so it lays flat and cooks evenly. I usually have to use my kitchen shears and a knife, btw, and sometimes even hit the back of the knife with my meat mallet to power through it, and in this case, I then cut through the breast, too so it has two halves. If you want to see a pro do it, I’m going to refer you to a video on Natasha’s Kitchen.

If I had a video I’m sure it would include a lot of messy stuff, some sighing, muttering and grumbling and maybe even an expletive or two! And after you saw it you’d want to order take-out, lol! You’ll get through it one way or the other and you can always smooth that skin back over the chicken when you’re done!

After the chicken is cut, just loosen the skin and set it aside while you stir together the marinade ingredients. Depending on where you live, you may or may not be able to find the yellow Aji Amarillo paste. You can order it if you’d like.

I just substitute in some Chili paste of some sort. I almost always have the Chili Garlic Paste (Sambal Oelek) on hand (and Bon Appetit has a great little article about Sambal Oelek and possible substitutions). It might not be 100 percent authentic, but your chicken is still going to be fabulous and you’ll be able to get it on the table! Which is the whole point of any recipe, amirite!?

Just mix all those marinade ingredients up in big bowl, add in the chicken and massage it, working some of it under the skin, no need to be perfect. Leave it in the fridge covered for 2 to 12 hours. No foodie will probably ever recommend this, but I went 2 days last time (things came up and I just didn’t have a chance to cook and/or eat it) and thought the flavor was off the hook. Better yet, and I didn’t see any harm done to the chicken; no texture change or deterioration!

I absolutely prefer the version in the bowl, though, it’s a little thinner and the flavor rings out so true w/o the mayo and/or Feta dulling that spice down. If you don’t want to use egg, use about 1/4 cup of Mayo instead. And if that doesn’t work for you, add in a little avocado. If you want to use Feta, again, about 1/4 cup will do it. If you don’t want or use cilantro, try parsley or use a combination.

You can use the jalapenos with the ribs in or without (they’re a little hotter with the ribs in) and use less or more. I like to clean the ribs out and use three. It’s a bit of heat but in a good way. It’s always hard to judge just how hot those jalapenos can be so you can start out with as many as you’d like, taste and add more if you want it hotter. Traditionally you’d use Aji peppers (and this sauce is called Aji Amarillo Verde) or the paste for this sauce, too, so add it if you have it, but don’t use as many jalapenos if you do.

If you’re more daring, you can try a half of habanero and a jalapeno; the habanero brings a lot of heat but it also has a little fruitiness just like the Aji Peppers.

Saving Money on This Recipe:

Chickens go on sale, sometimes once in a blue moon at about 49 cents a pound but they will run 69 to 99 cents a pound on a good sale. A great time to buy is just after Easter when a lot of those unfortunate layers are just no longer needed once the holiday has passed. Look for them in the few weeks following Easter and chuck a few in your freezer if you have room.

Check Aldi, if you have one for the jalapenos. You’re always going to be better off if you grow your own herbs. Bring them in during the winter if it’s too cold for them. A plant isn’t usually any more than a bunch at the grocery store, you don’t have to worry about them taking up fridge space and if you kill it off, just dry it and use it. I can’t think of a better way to add something fresh to a meal than to use fresh herbs.

Place chicken breast-side down on cutting board. Cut along both sides of the backbone with a sharp, heavy knife or kitchen shears. Remove and reserve the backbone for stock if desired. Press down on breastbone with palms until you hear it crack and chicken is as flat as possible. Using shears or knife, cut right through the breast following the crack if possible. If necessary, cover the top edge of the knife with several layers of towel to protect it and use a kitchen/meat mallet to assist getting through. (At your own risk and use good judgment.)

Loosen skin from breasts and thighs, being careful not to tear the skin and to leave it attached as much as possible. Set aside.

In a large bowl, add the garlic, soy sauce, aji Amarillo (or substitute), lime juice, paprika, cumin, pepper, and salt. Add the chicken and turn to coat, working some of the marinade up under the skin. Cover and refrigerate at least 2 hours and up to 12 hours, maybe longer if desired.

When ready to cook, preheat oven to 450 degrees F. Transfer chicken, skin side up on to a heavy sheet tray. Drizzle with oil. Roast until skin is golden and chicken is cooked through, 35 to 45 minutes (if using chicken parts, remove the breasts after 25 to 35 minutes). Safe temperature should be 165 degrees F. so remove at 160 and the temperature will rise as it rests. Let sit, loosely covered with foil, for 10 minutes before serving.

In a blender, blend onion, garlic, jalapeno, cilantro, vinegar, and egg yolk until very smooth. With the motor running, slowly drizzle in oil until mixture is emulsified. Taste and adjust the seasonings. Thin with a little water if desired.

I’ll be sharing at Fiesta Friday, Weekend Potluck and What’s for Dinner Sundays.