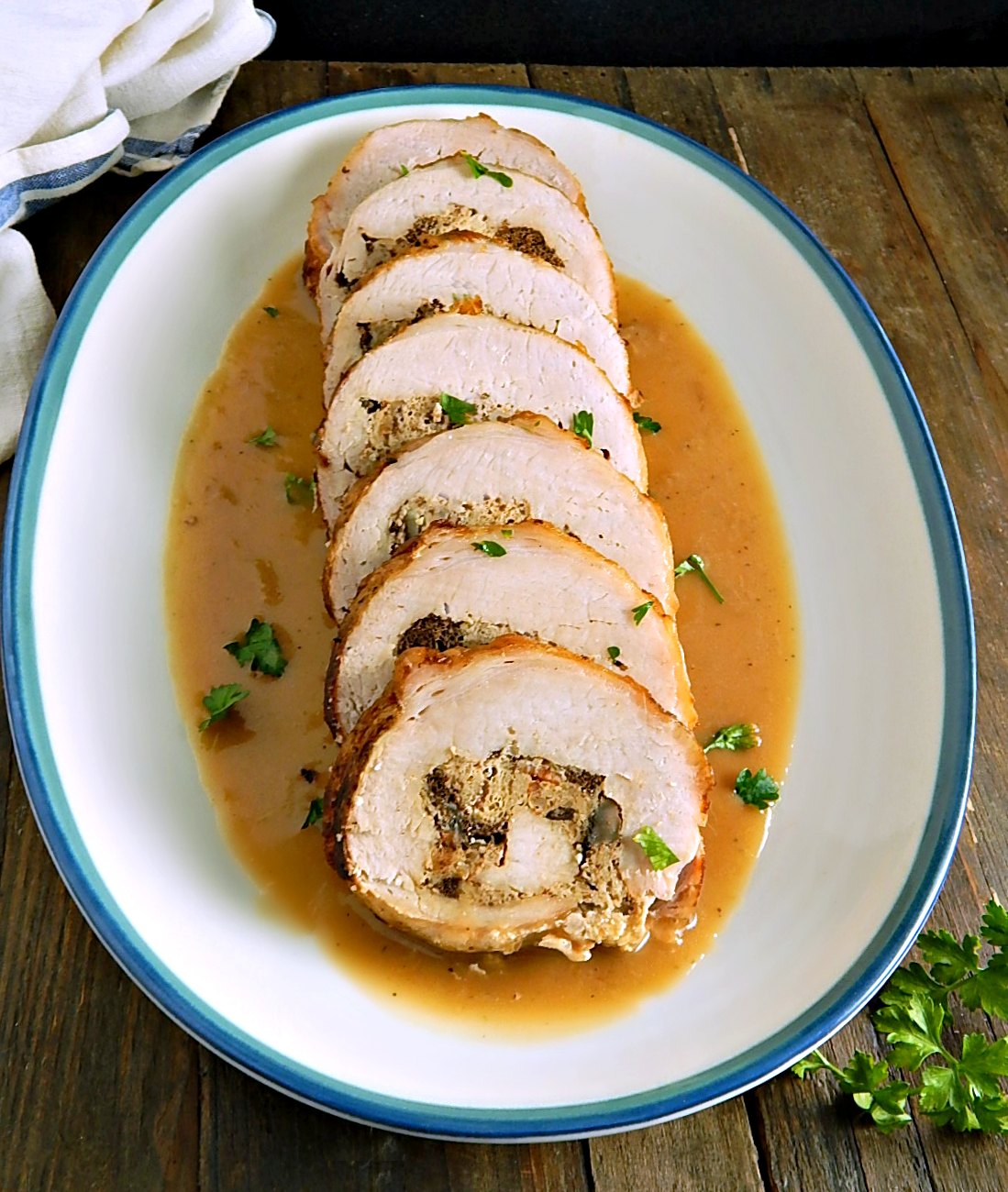 We took a departure this year during Thanksgiving and made something entirely different than we’ve ever done before. We made a Slow Cooker Stuffed Pork Loin. But what makes this pork loin especially delish (and especially Thanksgiving like) was that I stuffed it with my Sister’s Ridiculously Delish Thanksgiving Bacon Stuffing. This pork loin would be a beautiful thing for Thanksgiving, Christmas or New Year’s or any fall through winter dinner party.

Now a couple of years ago, I almost started a family war with my adamant declaration about what belongs in a stuffing and what doesn’t on my post for Classic Midwestern Stuffing. Bacon was on my list of things that don’t belong (Ask your Grandma, I said, Sausage belongs in the stuffing…) at least in a classic Midwestern one. Well, long story short, my sister makes her stuffing with bacon. So I had to eat my words AND her Ridiculously Delish Bacon Stuffing.

So we fell in love with Auntie Liz’s stuffing. And I just knew that it was going to be the perfect thing to stuff this pork loin with. Heck, all the flavors in that stuffing with that bacon are a beautiful match for turkey but also, as it turns out for pork. The stuffing is already so flavorful, all I added to the loin itself besides that stuffing is lots of salt and pepper and a little sprinkle of garlic powder. There’s one thing I wish I would have done, and that’s to add a few dried cranberries into the mix when I stuffed the loin. A little tart & a little sweet from dried fruit is always good. Next time!

I made the whole recipe of the bacon stuffing which was enough to stuff the pork loin and have enough as a side, along with a few leftovers. You can cut the stuffing recipe back if you’d like, but this pork loin serves 6 to 8 people pretty generously so it’s nice to have a lot of stuffing, You could also make this recipe with leftover stuffing, just make sure to moisten your leftover stuffing a bit if it’s dry.

But speaking of dry, If you’ve made any pork loin, ya gotta know that it’s a lean cut and can dry out in a heartbeat. The stuffing inside helps keep it moist but cooking it in a slow cooker is the way to go. What comes out is a beautiful thing, Golden brown, perfectly moist and there is more than enough stock left in that slow cooker for a fabulous gravy.

We served our pork loin with the rest of the stuffing on the side, our Best Company Mashed Potatoes, gravy, and my newest cranberry sauce, Spicy Jalapeno Cranberry Sauce along with a killer new recipe for Brussels sprouts. Those recipes are coming soon. This would also be wonderful with sweet potatoes and another veggie, like a broccoli/cauliflower medley. These Perfect Instant Pot Mashed Potatoes are a great option, too.

I cut my pork loin to prepare for stuffing it the same way I cut my pork tenderloin. I don’t just cut straight down which will give you two half moon shapes, difficult to pound out, I spiral it.

Place some plastic over the pork and pound it out so it’s as even as possible. Salt and pepper generously and lay out strings for tying. String is cheap, be generous with the length; excess can be cut off. Place the loin over the strings, spread your stuffing on, leaving about 2 inches unstuffed on a long edge and roll it up towards that bare edge.

When it comes time to tie, use a butcher’s knot and about an inch from each edge, first, which helps the rolled loin stay together, then go to the center and tie it. Tie from the center to each edge at about an inch to an inch and a half, judging as you go how tight you need to make each tie so your loin is even and round. If you’re a pro, you can probably tie with one long piece of string, wrapping it over and round itself as you go. If you’re a lesser mortal like me, try this method.

The photos of slicing, stuffing, and tying are from another post, my Bacon, Dried Cherry & Caramelized Onion Stuffed Pork Tenderloin, which is much smaller but works pretty much the same way.

This was the scrappiest pork tenderloin I’ve ever seen – but I managed to stuff it!

I made a cut down the center, leaving a thickness of 1/2″, then started taking small slices on the right hand side then did the same on the left hand side

After pounding, I have something large and flat enough to work with

Stuffing laid out. Notice the strings already in place for tying.

Tie each end, then the center and work from there.

Butcher’s knot (top) is basic square knot (bottom) with an extra twist in the first part of the tying.

Brown the pork well before it goes in the slow cooker. A well-browned piece of meat will help flavor the drippings and give you gorgeous gravy later. I thought I’d be able to use the oil and crusty bits from the pan I browned the pork in. That was a mistake on my part. The pork took awhile to brown and because of that those pan drippings were cooked too much and were past the point of using. I had to toss the gravy I made and remake it because it had a bitter taste from the drippings.

I ended up making a “slurry” gravy. A slurry is when you take your thickener (I used flour but you can use cornstarch or arrowroot) and mix it with water (or in this case, the stock from the cooked pork loin) so it’s a pourable liquid. Start with the flour in a cup and slowly add the 1/2 cup liquid in increments as you stir so it doesn’t clumb.

Then you’ll take all your yummy stock/liquid from the slow cooker, put it in a sauce pan and bring it to a simmer. When it’s it’s going good, whisk in the slurry and cook it at a good strong simmer for two to three minutes, stirring constantly.

Then turn down the heat to a bare simmer, stirring now and then as the pork rests, for about six to eight minutes. Taste and adjust. I almost always add a little dark jam to my gravy; it deepens the flavor and makes it taste amazing, although you won’t taste the jam in it. Start with a teaspoon and adjust from there and adjust the amount of salt and pepper, too.

When finished, you’re looking for a gravy that doesn’t look oily but is beautiful and consistent all the way through. There’s almost always some judgment call involved because the amount of your drippings and the amount of fat in them will vary a bit every time you make something. If it does look oily, mix up just a little more slurry and add it as the gravy simmers, bit by bit, giving it a minute or two each time at a simmer, until it’s just right. If your gravy is not thick enough for you, do the same thing. If it’s too thick, thin with a bit of water or stock.

This is a perfect example of a meal so good no one will know you’re cheap!

Pork Loin is one of the least expensive (along with pork shoulder) proteins. It’s lean, too, which means once cooked there’s very little waste. Always know the highs and lows in pricing. In our area, we can pick up loin on a great sale for 99 cents a pound up to $1.29 a pound while at regular store price they can run $4.69 or up. Watch for those great sales which usually happen about once a quarter, and more often in the fall and be prepared to buy.

The sales priced loins are usually the large pork loins, running between 18 to 20 pounds and can be up to three feet long. When you get them home, cut into sizes for your family and package. I’ll usually slice off a portion for a roast like this one, but the rest I slice into chops. Some into thick-cut pork chops for stuffing or fancy dinners, thinner pork chops for quick weeknight meals, and package any scrappy pieces for quick stir-fries.

Use a store-bought complete seasoned stuffing (not just bread cubes) boxed or bagged, prepare as directed and add your cooked bacon to it to shortcut this recipe or use your leftover stuffing from any holiday.

Slow Cooker Stuffed Pork Loin; this is only part of the loin and gravy on the platter.

Generously salt and pepper and lightly sprinkle on the garlic powder on both sides of the pork rectangle. Lay down enough strings, horizontally across the cutting board. Place the loin over, being careful not to disturb the strings. Spread and dollop stuffing over, keeping it even at about an inch high, leaving a two-inch border on one long side. Roll the loin up towards the side with no stuffing.

Tie at intervals, starting with a string on each end, about an inch in from the edge, then tie the center. Work your way from the center tie to each edge, making sure the roll is uniform in width, varying the tension of the ties as needed.

Heat In a large skillet, heat about 2 tablespoons of the oil over medium to medium-high heat and brown the loin slowly on all sides. Add additional oil as needed. Transfer the loin to the slow cooker.

Combine the chicken broth, and soy sauce in a small bowl; pour into the slow cooker. Cover and cook on high for about 4 hours or on low for seven. Transfer the meat to a serving platter and cover to keep it warm.

To make the gravy, pour the juices from the slow cooker into a saucepan. Bring to a simmer over medium heat. Add the slurry, whisking until gravy is thickened and bubbly, two to three minutes. Turn down heat to a bare simmer and stirring now and then cook for about six to eight minutes. Stir in the teaspoon of jam. Taste and adjust seasonings, adding more jam or salt and/or salt and pepper.

Slice the roast and serve it with the gravy.

I’ll be sharing my Slow Cooker Stuffed Pork Loin at Fiesta Friday #307, co-hosted this week by Jhuls @ The Not So Creative Cook.