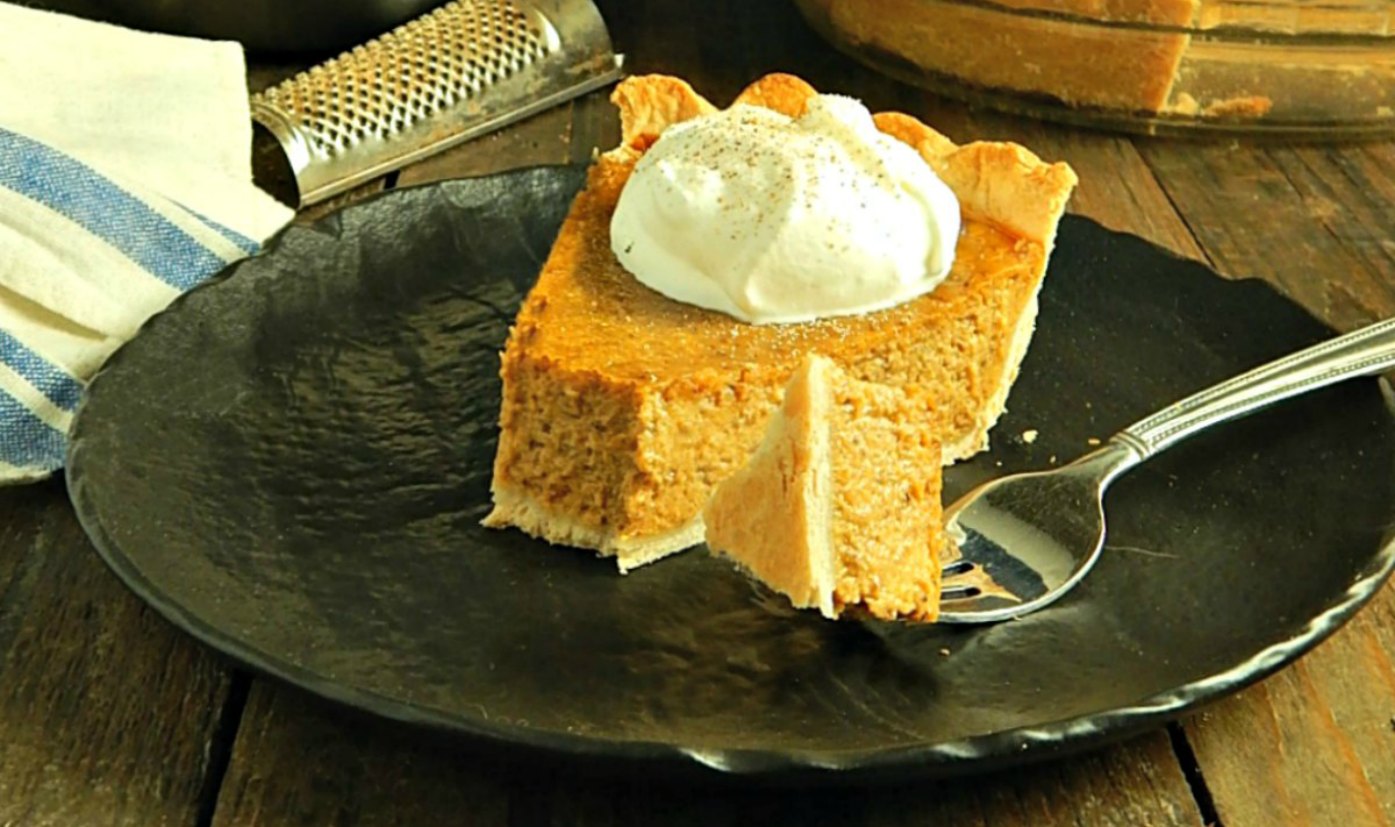 Some of you might know, while others of you might not have a clue until you’re ready to bake your Pumpkin Pie (probably the evening before Thanksgiving) that Libby’s changed their pumpkin pie recipe (yes, the one from the back of the can) this fall (2019.) It’s the first time there has been a change on the can since the original Libby’s Famous Pumpkin Pie was put on the can in 1950. Follow the link if you’re looking for the original, but here on this post I’m reviewing Libby’s New Fashioned Pumpkin Pie.

You may need the original recipe anyway if you picked up everything you need for the pie without consulting the back of the can and were counting on using the old recipe…there are several differences in the new pie, and one of them is the ingredients. First and foremost, you’ll need a can of condensed milk and a can of evaporated milk for the new back of the can recipe, Libby’s New Fashioned Pumpkin Pie,  while you’ll only need evaporated milk for the old.

There are some things you think will never change; after all that old recipe was on the Libby’s can for almost 70 years. I kind of felt the same way about my childhood home. It just never occurred to me that old stripped-down Victorian would be leveled to make way for a tidy new ranch. I gotta admit it was an improvement.

There’s no doubt that Libby’s back of the can, or as they call it, Libby’s Famous Pumpkin Pie is a classic, in spite of the inherent flaws. In honor of the change, I thought it would be fun (admittedly my idea of “fun” might be different than most peoples, lol!) to make both pies. This one and the new one, which is called Libby’s “New Fashioned Pumpkin Pie.” I usually make two pies anyway, so why not make one of each (they’re both super easy) and compare them?

We were divided in the house on the new pie. I vote wholeheartedly for the new pie (although I do think my favorite Pam Anderson Silky Pumpkin Pie is better, and I probably like the new pie because it reminds me of that one) and my son was adamantly for the old pie. Go figure! I do want to qualify that neither of us had any problem with eating either of the two pies, though! I go into the differences, below.

The two pies are pretty close and both super easy. There are three differences in the ingredients which make the New Fashioned Pumpkin Pie a little sweeter, richer and smoother with the teensiest bit of more spice (the cloves) than the Famous Pumpkin Pie. There are two minor changes in the mixing/baking instructions.

FYI: The Pam Anderson Silky Pumpkin Pie I mentioned earlier uses that same combo of evaporated & condensed milk as the New Fashioned Pumpkin Pie does, although the Anderson Pie has two additional egg yolks. My oven temperature is perfectly calibrated, accurate, and I use a GE Spectra gas oven. My pumpkin pies have always taken longer to bake than the can says and this has been true when baked in my oven or baked at someone else’s home.

The Cans of Condensed and Evaporated Milk look similar. Read the labels!

The Good & the Bad of Libby’s New Fashioned Pumpkin Pie:

The New Fashioned Pumpkin Pie has just a touch more clove than the Libby’s Famous Pumpkin Pie but isn’t so far out there or so spicy that it doesn’t still have that classic Libby flavor we have all come to love. It’s actually close enough so that many people might not even notice a change in the taste, especially if they have a pumpkin pie once a year. It was also just a little sweeter but honestly, it was a little hard to sort the additional touch of sweetness from the smidge of extra spice.

I felt the New Fashioned was silkier and more custard-like, maybe just a bit denser and not quite as light or as “fluffy” as the old Libby’s Famous Pumpkin Pie. This I think might be something people notice; not so much as they would guess this is a different pie than the original but that they might think the pie seems slightly better…that’s my educated guess, anyway. My son did not appreciate the denser texture as much as I did.

What was quite a bit different were the strange “bubble-like” projections of filling along the outer edge of the pie. They weren’t hollow, just bumps. They calmed down and sank a little as the pie cooled but as you can see in the pics, there is a definite waviness in about the first inch to inch and a half of the filling.

When I posted about the Libby’s Famous Pumpkin Pie, I highlighted four areas that I thought were flaws in the pie. So, just to be thorough, I’m going through those same four areas on this New Fashioned Pumpkin Pie.

So, this is a fine pie, perfectly acceptable and I do think some who dislike the original Famous Pumpkin Pie might get on just a bit better with this pie, especially if the dislike has come about because of some of the textural issues in the old. Or if you’re serving pumpkin pie haters, you might want to see Our Favorite Thanksgiving Desserts for more pumpkin (and other) pies and other desserts.

First of all, prepare your pie crust and preheat the oven.

This pie is absolutely simple to make and is made completely by hand. Mix together the spices in a small bowl. Whisk the eggs in a largish bowl, dump in all the ingredients (I find it helpful to sprinkle the spices over the whole works rather than dumping them all in one spot, being sure to use a CUP of evaporated milk and a CAN of condensed milk. Pour into the shell, put it in the oven and after 15 minutes, turn the temperature down.

Now here’s what they don’t tell you in the original recipe, probably because it doesn’t all fit on the back of the can, without getting overly complicated, and I did this with both pies:

Know that this pie seldom cooks up with a perfectly flat, unmarred top because it will puff and then fall. Although it didn’t crack, there are some strange bubble-like formations up to about an inch to an inch and a half out from the crust. If you want to disguise that, either strategically pipe whipped cream around the edges of the pie or bake decorative leaves, acorns, etc. using any extra pie crust and place them on the pie.

When you look at the photo on Libby’s site, know that your finished pie won’t look exactly like the one a team of professional food stylists worked on. Mine doesn’t! Actually, that pie might not even BE this pie; the color is a strange orange and the pie appears much higher than this pie is. They do show the “bubbles”, though. I used some harsh light on the comparison pics to highlight the differences in the pies; some of it the bubbling was hardly noticeable in real life and keep in mind food always looks (and tastes, lol) better “in person.”

The fall, in the pre-Thanksgiving through New Year’s sales (see my post on How to Beat the Grocery, Winter Holidays) is when you want to pick up canned pumpkin. My sister-in-law passed on that pies made with canned pumpkin are best after the canned pumpkin has “aged” a year or two. I swear it’s true! Stock up during the fall and stash some away to use throughout the year in savory dishes or desserts, and make sure to have enough for next year’s pie.

Pie crust is strange; it’s one of the few items that can be cheaper to buy with the right sale (and coupons) than to make. I’d rather have a homemade pie crust but that’s “just the facts, Ma’am.” It really all depends on the price of butter. Buy it at the low during the holidays and stash it in the freezer, and buy enough in the fall to last until Easter and enough at Easter to last until the fall. And yes, you should have a freezer if you’re interested in being frugal!

That brings me to butter, one of the priciest baking items. Really stock up and fill your freezer when the prices are low, which is usually the Winter Holidays and the pre-Easter & Lent sales. A rock bottom grocery sale price is usually better than what’s at the buyer’s club or Aldi, though both are far less than a regular grocery price. Know how much butter you use on average per week, count the weeks to the next big holiday, buy that amount and freeze.

Watch egg prices during the holiday sales and stock up. For instance, if they’re on sale around Halloween, buy enough to last to Thanksgiving, then at Thanksgiving, buy enough to last to Christmas, and so on. Eggs last for weeks past the “buy by” date, and for some items, like hard-boiled eggs or deviled eggs, it’s nice to have eggs that have a bit of age on them. If you eat eggs every day you might not have enough storage for this strategy.

I know this is long but I do want to talk about evaporated & condensed milk. Like most canned items, it’s best stored at room temp which according to ThoughtCo is (59 °F) and 25 °C (77 °F), and should be stored out of sunlight. The “best if used by” dates are put on by the producer, have nothing to do with food safety, and aren’t regulated. The quality of any canned goods can be affected by improper storage or age. If you open your can of either milk and it is slightly darker than usual, don’t panic; the sugars in the milk have begun to caramelize. It’s still fine to use. If the milk is clumpy, it’s best to discard it. if the can is dented or rusted, discard to be on the safe side.

Other Options for Thanksgiving Desserts:

Sometimes pumpkin pie haters are perfectly satisfied with other pumpkiny recipes. I’ve found from personal experience, some will eat this Pumpkin Spice Cake, this Martin Sheen’s Pumpkin Cheesecake, my Grandmother’s Pumpkin Bread, and so on.

Notice the blatant self-promotion in linking you to my recipes. 🙂 And if you’re looking for other non-pumpkin options, there are several, some of them showstoppers, on my page Favorite Thanksgiving Desserts.

BAKE in preheated 425°F oven for 15 minutes. Reduce temperature to 350°F; bake for 30-40 minutes or until knife inserted near center comes out clean.

COOL on wire rack for 2 hours. Serve immediately or refrigerate.

I will be sharing Libby’s New Fashioned Pumpkin Pie at Fiesta Friday #303 this week. I’m co-hosting this week with Antonia @ Zoale.com I hope you’ll drop by and see all the fall, Thanksgiving and a few Christmas posts by some of the most talented bloggers out here! Happy Holidays.