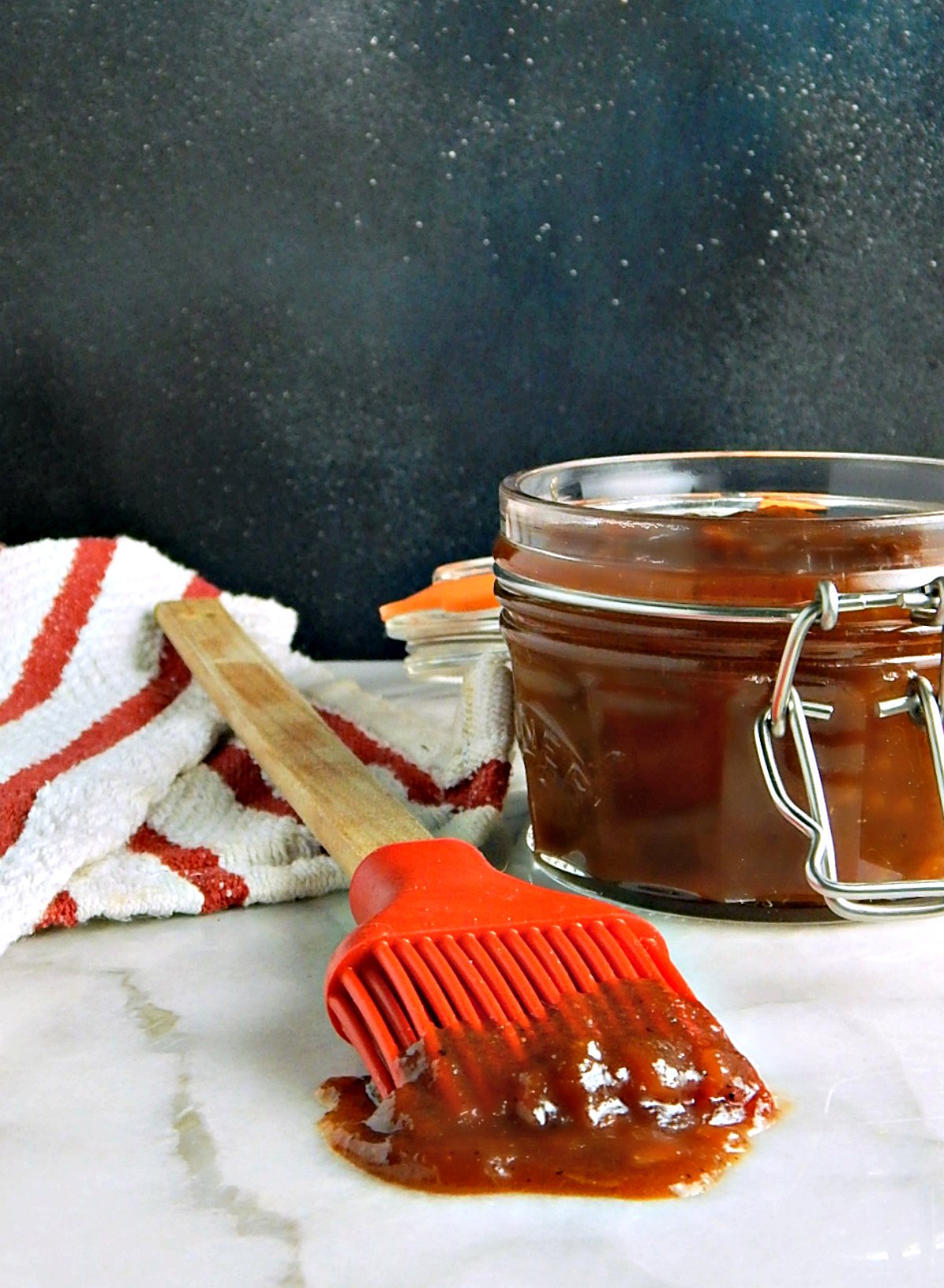 I’m kind of getting on a little apple kick here in late May. It’s because I posted the recipe out for my Cider Glazed Ribs so I just had to put out the recipe for this Apple Butter Barbecue Sauce to complement them. And to tell the truth, I have a slaw coming up with apples in it, too. That’s my Tangy Apple Cabbage Slaw.

Maybe I should have saved the posts for fall, with the apple theme and all. but none of these items, the sauce, the ribs or the slaw are overwhelmingly apple. They just have a slight hint and that makes them all go together so well. Besides I just think all of this would be fantastic for Memorial Day Weekend. Or anytime this summer. And I am sooo ready for summer – how bout you?

This is an interesting sauce. Most of the ingredients are the usual suspects you’d expect in a barbecue sauce. What sets it apart is the deep richness of the apple butter and the wee touch of hooch. There’s a little bourbon if you likey likey or not if you don’t for a husky backnote that offsets the sweet. And of course, a little liquid smoke to lend that smoky taste. If you haven’t used liquid smoke, it’s really not scary, It’s just the distilled essence of smoke and is made in just about the same way distilled water is. I have it on my Top Secret Super Stealth Arsenal of Ingredients.

This barbecue sauce would be fantastic on almost anything, but I think that anything pork has an affinity for the slight hint of apple that comes through in the sauce. Maybe some pulled pork and of course, these or any ribs. But then I wouldn’t turn out a burger slathered with a little Apple Butter Barbecue Sauce, maybe one topped with onion rings.

This barbecue sauce reminds me a bit of a kicked up and just a little more robust Sweet Baby Ray’s sauce, so don’t be worried that it tastes a lot of apples; it’ s barely there, just a hint of it. I did notice that it didn’t keep as long as some barbecue sauces in the fridge, probably due to the higher fruit content and the butter, but it was fine for a couple, three weeks in the fridge.

This is a pretty simple sauce to make. You’ll need to saute your onions in the butter, add the garlic then there’s really nothing to the rest except dumping in the remaining ingredients. Then you’ll let the sauce simmer, stirring now and then until it’s gorgeous and glossy and thick. Keep in mind that, like most barbecue sauces, it will be a little thicker once cooled.

When you make this barbecue sauce, use a larger pan than you think you’ll need, first because as this thickens, it’s going to spurt and sputter, and secondly, the larger surface area helps speed the reduction along.

It’s up to you if you want to serve this sauce as is or blend and strain or just strain. I like it just fine chunky but not everyone “gets” that, and texture in a barbecue sauce might bother some people. As you can see from the pics, I left mine on the chunky side, but I did take care to cut the onions pretty finely.

For me, making this barbecue sauce was actually a bit of a money-saving proposition. See, I had a jar that was opened and might have just languished in the fridge. I guess I just lost my taste for it and this barbecue sauce put it to good use rather than letting it go to waste.

This is a great recipe to make if someone gives you apple butter as a gift. (Don’t we all love to have that friend? Thank you Jenni!) And of course, if you can your own, you’re likely to have it a lot cheaper than if you buy it. It’s perfect anytime you might have an abundance of Apple Butter. If you run out and buy the apple butter, well that does up the price and it’s then it’s not as inexpensive to make as some sauces. I think this sauce is so lovely it’s worth a little bit of an extra expense.

Since barbecue sauce is so often a condiment made from other condiments, you’ll use a quite a few of them when you make most. I do like to watch the summer sales, especially around the summer holidays and stock up for the year on all my condiments. There are sporadic sales on condiments right before the Superbowl, and this year, I noticed around March Madness, but they don’t come near to beating out the summer sales prices.

This Apple Butter Barbecue Sauce with a touch of bourbon might just be your new signature sauce! Try it on a burger or on ribs.

In a large, heavy saucepan, melt butter over medium heat, add onion and saute, stirring now and then until translucent, 6 to 8 minutes. Add in garlic and stir for a moment longer just until fragrant.

Add the rest of the ingredients and bring to a boil. Turn down to a simmer, stirring now and then, until reduced to desired consistency, 10 to 15 minutes or so.

Store in a jar in the refrigerator; lasts for two to three weeks.

Use a larger pan than you think necessary; this sauce can sputter and spurt as it reduces.

——————————–
I’ll be sharing my Apple Butter Barbecue Sauce this week at Fiesta Friday #277. Thank you to the co-hosts this week, Diann @ Of Goats and Greens and Jhuls @ The Not So Creative Cook.