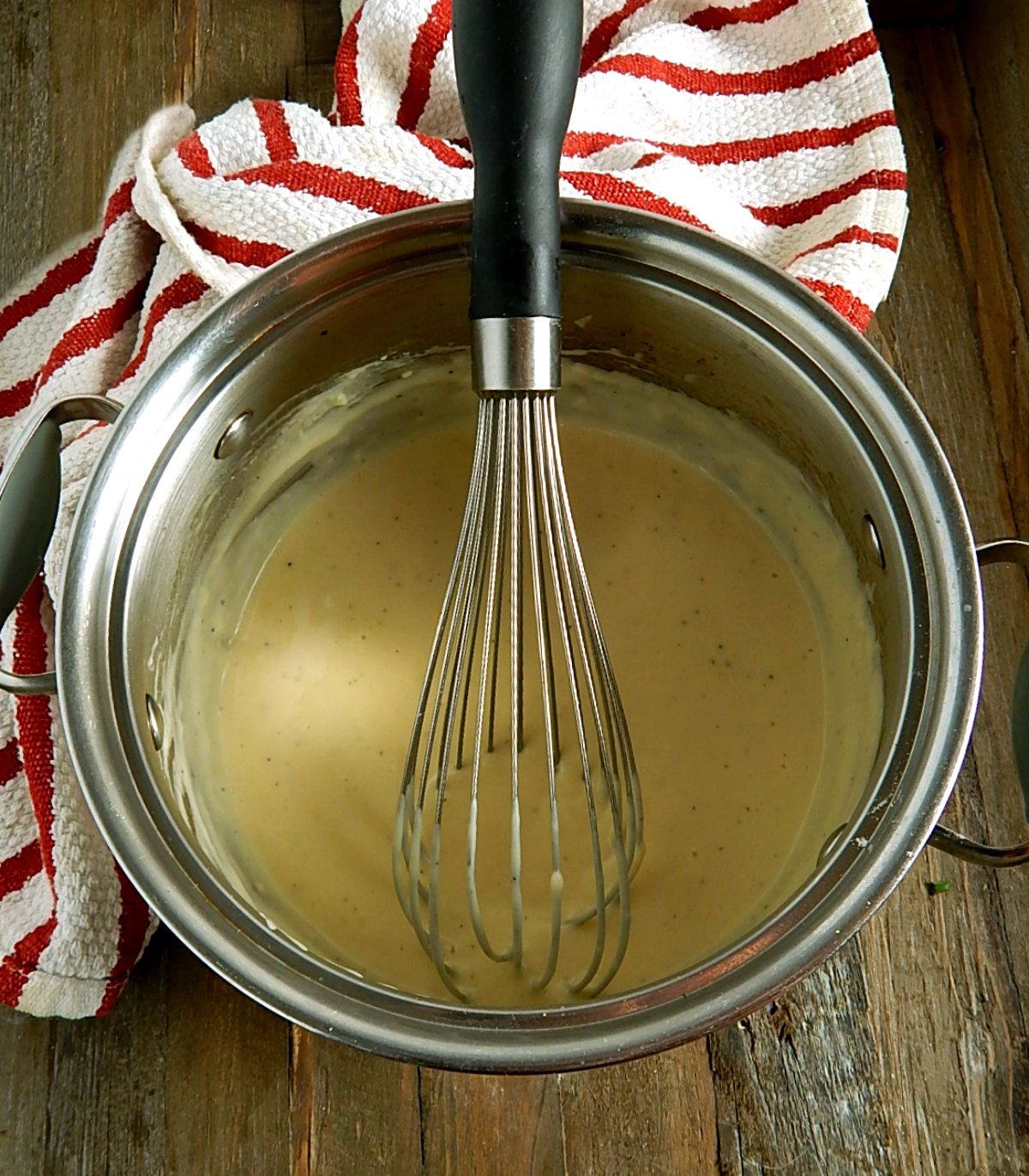 Let me tell you about Supreme Sauce – it really IS Supreme and you might have had it in many dishes, even though you didn’t realize it. Supreme Sauce is basically lots of butter and a little flour heated and whisked together to form a roux. Then stock is added and the whole thing is simmered away and reduced until it forms, a rich sauce like gravy.

This Easiest Supreme Sauce really is as easy as gravy, it’s just not your every old gravy. First, there’s all that butter and then at the end, it’s finished off with a good drizzle of creme fraiche or cream and maybe a squeeze of lemon. Personally, I like to add a touch of Sherry to my Supreme Sauces instead of the lemon and in the States, we tend to use Sour Cream or even Cream Cheese in dishes made with Supreme Sauce. You’ll want to stick with the Creme Fraiche or actual Cream when making this stand-alone Supreme Sauce so it doesn’t curdle as it cooks.

You’re likely to see Supreme sauce served in dishes with mushrooms, like dishes where you saute a chicken breast or a pork chop, then add onions and mushrooms to cook away in the pan and then sprinkle them with flour and add stock. My Creamy Mushroom Pork Chops are made with what is basically a Supreme Sauce. Most recipes don’t say things like “then make the Supreme Sauce” and you’ve probably been making Supreme Sauce all along IN recipes if you’ve cooked much at all, even though you might not have known it. Unless maybe you’re a French chef or classically trained, or just a food geek like me!

The biggest things to know about making the Easiest Supreme Sauce is to use a good chicken stock if you have one. Preferably a homemade one. That’s always going to give you the best flavor. I have made Easiest Supreme Sauce with store-bought boxed stock and in a pinch with chicken base. The difference is the good stock will give you a lovely, beautiful nuanced flavor and the other is going to give you something more along the lines of a saltier, diner type of a flavor. Hey, I’ll take it either way, because both are a lick your plate clean kind of deliciousness.

You’re going to have to be patient because even the Easiest Supreme Sauce is going to have to have the flour and butter cooked for two or three minutes so that raw flour taste won’t come through in the sauce, then after the stock is added, it’s going to have to be simmered away, stirring now and then at first and more at the end for at least 10 minutes or so. Then you’ll add the cream and cook, stirring like mad for about two more minutes.

Someone once asked me, “How do you know the butter and flour have cooked enough?” and there are two ways to tell. First, the mixture will start to look a bit drier and after you’ve made a few rouxs you just “know” by sight, but another way is to take just a tiny bit and taste it. It will taste bad if the flour is raw and while it won’t really taste good once that flour is cooked enough, it won’t be bad and believe me, you’ll know the difference. When the stock is added, don’t add it all at once, add it in small additions, stirring like mad and as it thickens, add a bit more until your sauce is creamy. That keeps the sauce from getting lumpy. If you do ever end up with lumps in a sauce or gravy, just push it through a strainer. All better!

The biggest way to save money on this recipe or just about any recipe is to make your own Chicken Stock. Making your own is also a great way to make sure you not only have the best-tasting stock but one without a lot of additives. I have a recipe on my site for the Best Chicken (or Turkey) Stock if you want to give it a go and don’t have a regular recipe of your own.

Watch the price on your cream, too. Cream is pretty inexpensive at Aldi (about half the price of the cream at my grocery) and at Costco. The smaller container at Aldi suits me better. Cream, with its high-fat content, keeps for weeks, unopened and it’s a good item to pick up during holiday sales when it’s usually on special.

Melt butter in a saucepan over medium heat. Add the flour and whisk for 2 to three minutes. The roux should be light “blond” in color so watch the heat. Add the stock in small additions, about 1/2 cup at a time, and whisk until smooth.

Bring the mixture to a boil then reduce the heat to low and cook for about 10 minutes until sauce is thick enough to leave a trail when the whisk is run through it.

Whisk in the cream and lemon juice or sherry and continue to cook for 2 minutes, stirring constantly. Season with salt and pepper. Serve warm.