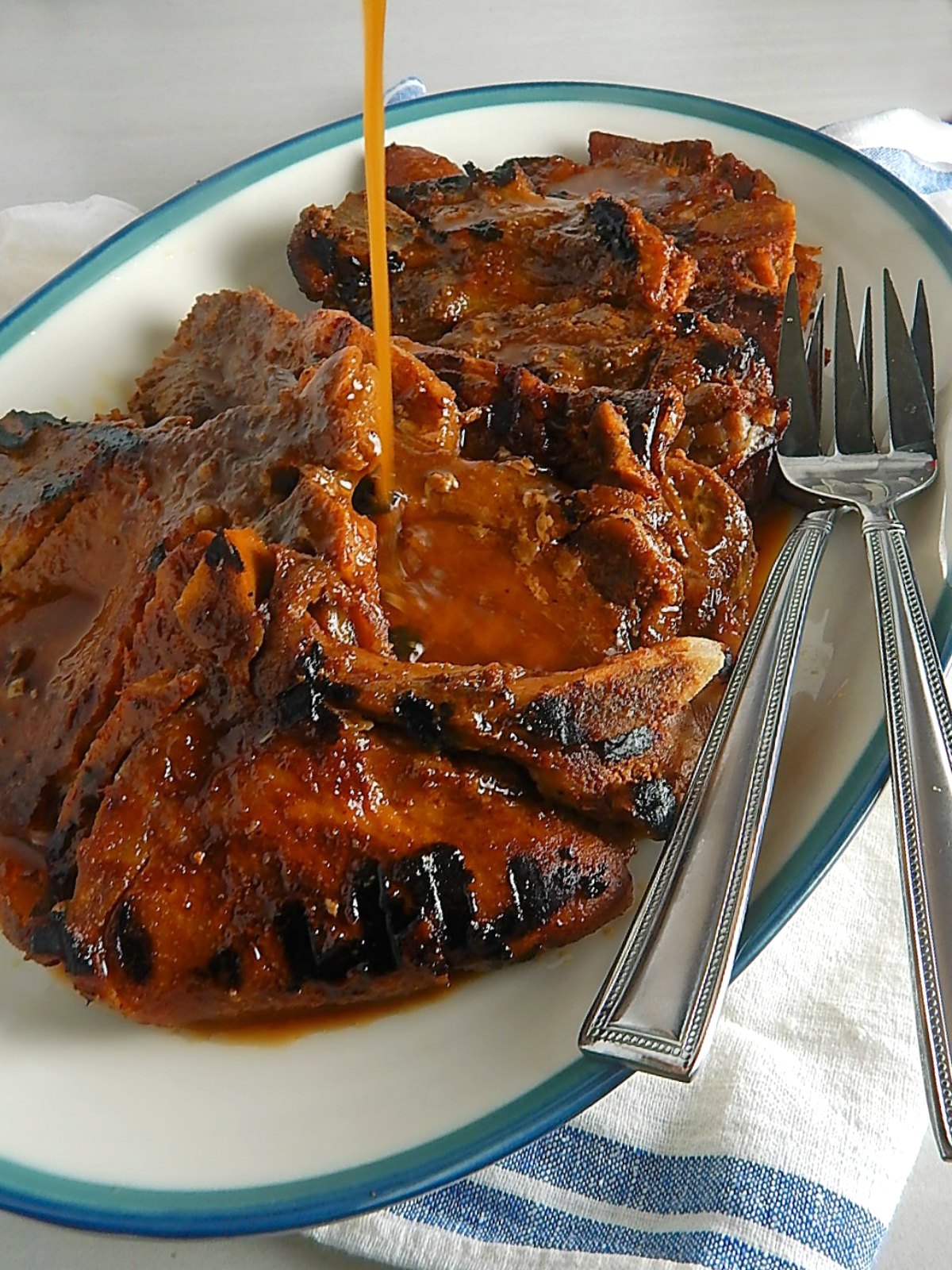 I’m not sure if anyone ever told me how to make St Louis Pork Steaks. When you grow up in Iowa (I know I just blew my St. Louis Pork Steak street cred – Missouri is one state south and Iowa is a huge pork producer) or the Midwest, there are certain dishes you just know how to make.

One of them is that backyard barbecue fave, St. Louis Pork Steak. I gotta say, I never heard this called St. Loius Pork Steak until I was well into adulthood and saw them in a magazine. We called them Barbecue Pork Steaks or Barbecue Pork Chops and they are the perfect recipe to use up those large family packs of thin, cheap pork chops when you see them on sale. And a perfect recipe when you need a bunch of food for a pack of hungry people.

Once ya pin a food down to a specific location and a certain style (Hello, South, I just saw Rhubarb pie called one of the greatest Southern desserts?!!) it can take on a bit of a mystique. And then the (hopefully) in fun bantering and bickering starts. Here’s what I understand about St. Louis Pork Chops that makes them just a bit unique.

First of all, the best cut is said to come from the shoulder, and traditionally, they are rather thin. The pork is seasoned, and barbecue sauce is used. Those “in the know” seem to prefer the local brand Maull’s. Now, I haven’t had Maull’s and don’t even know if I can get it up Nord here in Minnesota, but the childhood barbecue sauce I grew up with is KC Masterpiece. Any smoky, sweet, St. Louis Style Barbecue sauce should work just fine. Some people swear by Sweet Baby Ray’s.

There’s another addition to that barbecue sauce that’s kind of new to me. Beer. Lots and lots of people like to put a little beer in the mix. That’s a change I can get behind! If you don’t like the idea of the beer, use cider or even a little water. If you have time to mix it up, try my Homemade Seasoning Salt…it’s really the perfect thing. Use any seasoning salt, but do keep it simple. This isn’t the place for fancy rubs.

Pork Steak like this can be made in a lot of ways! It can be done all on the grill, they can be smoked, they can be partially grilled and then placed in a big pan on the grill and slathered with sauce to finish cooking. Or they can be done in reverse, cooking the pork chop in barbecue sauce (oven, slow cooker, grill or even Instant Pot) and then finished on the grill.

The method chosen is usually dependent on how many you’re cooking for, your patience level, and the weather! Everyone has their preferred method, and like everything else, there are some that have turned the St. Louis Pork Steaks into an art form of thick, gorgeous glossy mahogany beauties. This isn’t that recipe. This is down-home cooking for sure.

Me, I like to keep it simple and toss the pork steaks in the oven, slathered with barbecue sauce, covered and slow cooked until just tender, 1 1/2 to 2 hours. Then I take them out and mark them on the grill, adding more sauce as needed. Layer your steaks on a big platter and then all the extra sauce and juices from the cooking get drizzled over those chops. Perfection! Defat those juices if you want. This is a method that works great for a big crowd. Keep pans of the tender chops in the oven and bring out to the grill as needed.

Pork steaks like this in my area are usually sold in large family packs at a steep discount. There doesn’t seem to be any rhyme or reason as to the timing. They’ll just appear at the store, but they’re not an item that’s always at the store. When I see them, that’s when I think St. Louis Pork Steaks! For my smaller family, I would always have plenty and plenty of leftovers but if I was planning on a summer bbq party or campout, I’d pick up several packs when I see them and toss them in the freezer.

If you don’t have those family packs where you live, cut a pork shoulder, preferably boneless, right? Into thin, maybe 1/2 inch slices. And of course, you’ll want to pick up that pork shoulder on sale and may want to plan on what to make with the rest of it if you have huge one and way more than you need. Check out my main menu for pork recipes.

I like to serve this with the basic barbecue sides and lots of them since the chops aren’t necessarily huge. Some corn (of course) goes well and in this case, my newest favorite potato salad, my Loaded Baked Potato Salad. You can never go wrong with cole slaw, either for a budget side! Just fill that plate out with all the good stuff.

Preheat oven to 325 degrees. Sprinkle both sides of the chops with seasoning salt. Layer chops in a 9 x 13 pan. Pour beer into pan, not directly on chops. Cover the chops with barbecue sauce, lifting chops a bit to get some sauce between. Cover and bake until tender, but not falling apart, usually 1 1/2 to 2 hours.

Heat grill to medium-high. Remove chops from the sauce and place on grill, until the barbecue sauce starts to caramelize and you have a few grill marks. Brush with additional sauce, turning chops as needed. Serve with the remainder of the sauce.

I’ll be bringing St. Louis Pork Steaks to Fiesta Friday #234, hosted this week by Jenny @ Apply To Face Blog and Deb @ Pantry Portfolio. Stop by and take a peek at their blogs! Jenny will have you in stitches (and good eats) and Deb’s enthusiasm for life and cooking is going to carry you away!