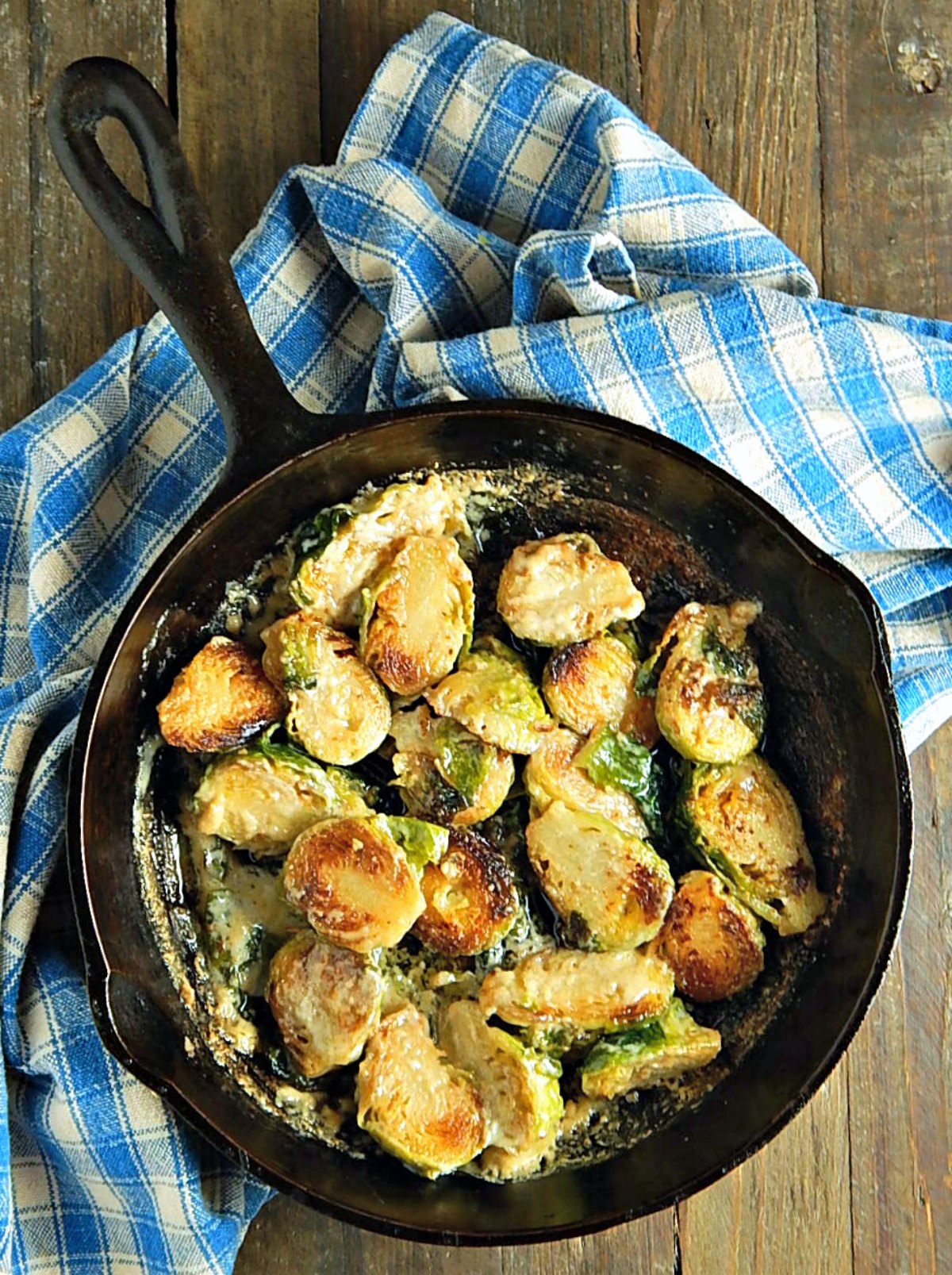 When I first made Cream Braised Brussels Sprouts I gotta say that I felt like I had made some new discovery! These are absolutely fabulous! Decadent, for sure but wow, will they ever rock your world! Have you tried them yet? Maybe now is the time!

Heck, I might not have even tried them if I hadn’t overbought on Brussels and just happened to have a little cream in the fridge. It had gotten to the point where they needed to be cooked and cooked now if you know what I mean.

Ok, so I gotta admit that these Brussels aren’t necessarily going to win any beauty contests. The might even be just a bit “ugg” but boy do they ever make up for it in the taste department. These Brussels are, as the kids say, OMG delish. Seriously.

They kind of turn upside down everything I thought I knew about cooking Brussels Sprouts. The sprouts are tenderly braised until they’re very well cooked, not just to the crisp-tender state I usually (and all the experts say we all should) favor. Instead, they’re soft and luscious, slowly braised until they’re spoon tender, almost fally-aparty and the cream is reduced to literally little more than a glaze.

After making these, I started paying more attention to Brussels and cream and saw a lot of variations. Additions of wild mushrooms, shallots or caramelized onion. Many have wine and/or bacon, cheese and/or spices ranging from nutmeg to cayenne. Maybe I’ll get fancier sometime, but in the meantime, I can hardly imagine anything better than this very simple recipe. I kinda wanted to lick my plate clean. Or maybe I should say I absolutely wanted to lick my plate clean, but only kinda wanted to admit it! I would serve them as a side to anything simply cooked, maybe a chicken breast and they’d be a fantastic side for a steak. As a matter of fact, they remind me of that Steakhouse special, creamed Spinach. Only better because, well, Brussels Sprouts!

These are super easy to make, but they do require quite a bit of attention at the end. You’ll start out sauteing the Brussels cut side down and getting a good caramelization on them and that might require moving and shuffling them around. Then the cream goes in, the lid goes on and they’ll simmer away, and that’s pretty hands-off, just check them now and then to make sure nothing is scorching.

Once the Brussels are soft and that lid comes off, they need to be slowly simmered so the cream doesn’t break into a greasy liquid as it reduces. Just watch them like a hawk and nudge the Brussels around now and then so the cream flows under and they don’t burn. If the bottoms of any of them are getting too dark, flip them over and shuffle them around a bit.

Remove the pan from the heat if needed and if any of the Brussels seem a bit too pale on the cut edge, run them through an area where the cream has darkened and they’ll pick up a touch of that color. Don’t forget a good squeeze of lemon at the end; it brightens the whole dish and takes it from delish to over the top.

Look for Brussels on sale and in season and be sure to check for freshness. The cut stem on the bottom tells the story; the freshest ones will not be all dried up and/or brown.

The cream is on sale pretty much every holiday, often at about 1/2 price, and keeps well for several weeks due to its high-fat content. Buy it a low. If you are a member of a buyer’s club the pricing is usually better than the grocery store sales prices, but Aldi usually beats out both – and has the advantage of being in pint (2 cup) cartons rather than a huge quart. Once the cream is opened it only has a few days.

In season in the winter months, look for bags of lemon on special – crunch the numbers. There’s really not much reason to pay full price as lemons store well in a bag in the fridge as long as they’re kept out of condensation. Look for lemons that are heavy for their size. Use every bit – the rind can be grated and saved in a small snack-sized Ziploc in the freezer for dressings or recipes. Cost for one lemon: 33 cents.

Trim Brussels sprouts by removing a slice from the end and any damaged leaves. Cut in half, stem to tip.

Heat the butter and oil in a large skillet, add the sprouts, cut edge down. Cook, turning now and then over medium high heat until the sprouts are browned, several minutes.

Sprinkle with salt, add cream and stir. Cover the pan, reduce heat to a bare simmer and cook until the sprouts are soft when pierced with a fork, 25 to 30 minutes.

Remove the lid and simmer another minute or two to thicken the cream to a glaze that coats the sprouts. Add a little lemon juice and stir. Taste for seasoning.

Note: Simmering cream too quickly, especially at the end of the cooking time can cause it to separate and leave the Brussels Sprouts greasy. Low and slow is the way to go!

I’ll be taking this recipe by Fiesta Friday, hosted this week by Zeba @ Food For The Soul and Jhuls @ The Not So Creative Cook.