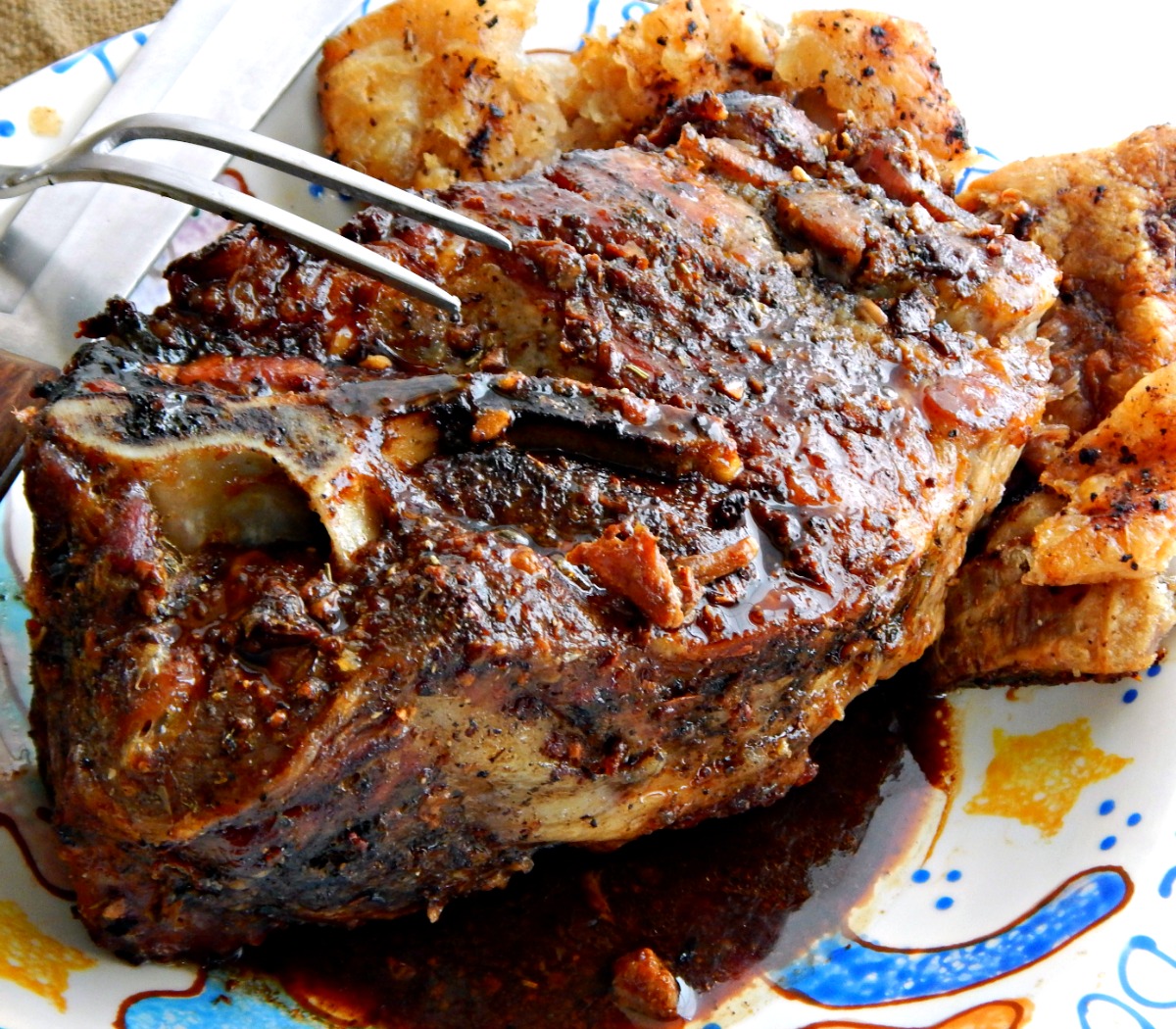 If you’ve never had the Pernil Classic Puerto Rican Pork Shoulder, you’ve been missing out. It’s beyond fantastic – slowly roasted, garlicky, herby deliciousness, done when it’s just about falling off the bone tender.

This Pernil is a simple, garlicky, herby pork shoulder, roasted until it’s all but falling apart tender and if you’re not having it for some kind of a special occasion feast at your house, well just serving this is reason enough for a party. I get rave reviews every time I serve this. Pernil is one of those dishes I like because it’s fabulous but easy and will make you look like a genius. I don’t mind at all that it serves a crowd, too, and you’ll probably have marvelous leftovers. Minimum effort – maximum payoff.

A very traditional Pernil is made with a picnic ham, a cut that’s not easy to get in a lot of places in the States. When it’s slowly roasted, the skin forms amazing cracklings called the cueritos, not to be confused with the pickled kind. You can get a different but still delicious effect when you use a good pork shoulder with a fat cap; it will form a kind of Chicharrones. Keep in mind, that I’m not Puerto Rican, so take that statement with a grain of salt.

So what do you serve with Pernil? You can go all out traditional and add Puerto Rican sides, or do like I did here in South Dakota in the dead of winter because we really can’t pick up some of the ingredients needed to make them. Hey, at least I didn’t use any cheese or bacon, the two most famous condiments up here in the States!

I made what I call Rice with a Puerto Rican Flair, served some black beans doctored up with cumin and garlic and a sweet Northern Style Cornbread. There were no complaints. 🙂 But just to make sure, I served a Puerto Rican cocktail called a Coquito, a coconut cocktail laced with Rum. That we CAN get here! But that’s another story, and another recipe. Click over if you’re interested.

You’ll need to start the night before, preferably, preparing a kind of rub or marinade for the roast. If your roast has a good fat cap, you’ll cut, between the fat cap and the pork, leaving the fat cap attached at one of the narrowest ends. Then whether or not your roast has the fat cap, stab all over.

Then line a pan large enough to wrap your roast with overlapping plastic wrap; the idea is that after you rub the garlicky, herby deliciousness all over and into every nook and cranny, and place the fat cap back, you’ll pull the plastic wrap up and around the roast, bringing all those seasonings in contact to the every exposed area.

You can probably get by with a six to eight-hour marinade, but the roast needs to sit at room temperature for an hour & a roast of the size takes a couple of hours to cook. You’ll need to start pretty early in the day & you’ll be missing out on flavor. If your roast isn’t exactly a size called for in a recipe, see this handy dandy Chart.

There is hardly a more inexpensive meat protein that Pork Shoulder. Check out my post on Buying a Large Pork Roast BostonButt/Shoulder for lots of tips.

Of course, other than buying that shoulder at a great price, the most cost-effective thing you can do is manage the leftovers well. I have a whole post of collected recipes for Leftover Pork and some are better than the original. See Inspiration & Recipes for Leftover Pork. I hope you and your family and/or friends enjoyed this (and will enjoy some of those leftovers) as much as mine!

Place garlic, oregano, salt, and pepper in a food processor. Pulse until the garlic is broken down. Slowly add the olive oil and vinegar and process until a relatively smooth paste is formed. Scrape down often.

Using a very sharp knife, remove the fat cap from the roast leaving it attached on one end (the narrowest) so you can lift it like a “flap.” Stab the roast all over, deeply, forming pockets throughout the meat. Rub the paste mixture into the roast, making sure to get some of the mixture into the pockets. Place fat cap back on top.

Lay overlapping sheets of plastic wrap on the bottom of a shallow dish, using enough to hang off the sides and enough to wrap the shoulder in. Place the shoulder in the dish and pull the plastic wrap up and over, sealing tightly. Marinade for at least 6 and preferably 24 hours. If there is no time to marinade, it will still be good, but the longer, the better.

When ready to cook, remove roast from oven, unwrap and let sit for an hour at room temperature. Preheat oven to 400 degrees F. for at least 30 minutes.

Place pork in a pan at least 2 to 2 1/2 inches deep. Cook, uncovered, for one hour at 400 degrees F. Turn oven down to 325 degrees F. and continue to roast until roast is tender and when a fork inserted in the side will turn easily. Calculate around 20 minutes per pound.

Let roast sit for 15 to 30 minutes at room temperature, lightly covered with foil, before serving. Slice or break apart the shoulder meat, break the cueritos (crisped fat) into pieces and arrange around the meat. Keep them dry. Any juices may be defatted and drizzled over the meat.

Note: If your pork shoulder does not have a fat cap, simply stab it all over, rub, marinade, bring to room temperature & roast the whole time at 325 degrees.

If you’re looking for a few leftover ideas for this roast, think Cuban Sandwiches or Pork Fried Rice. You won’t go wrong with either!

I’ll be taking this recipe to Fiesta Friday Link Party!

Update: I’m proud to say this recipe was one of the Fiesta Friday Features.