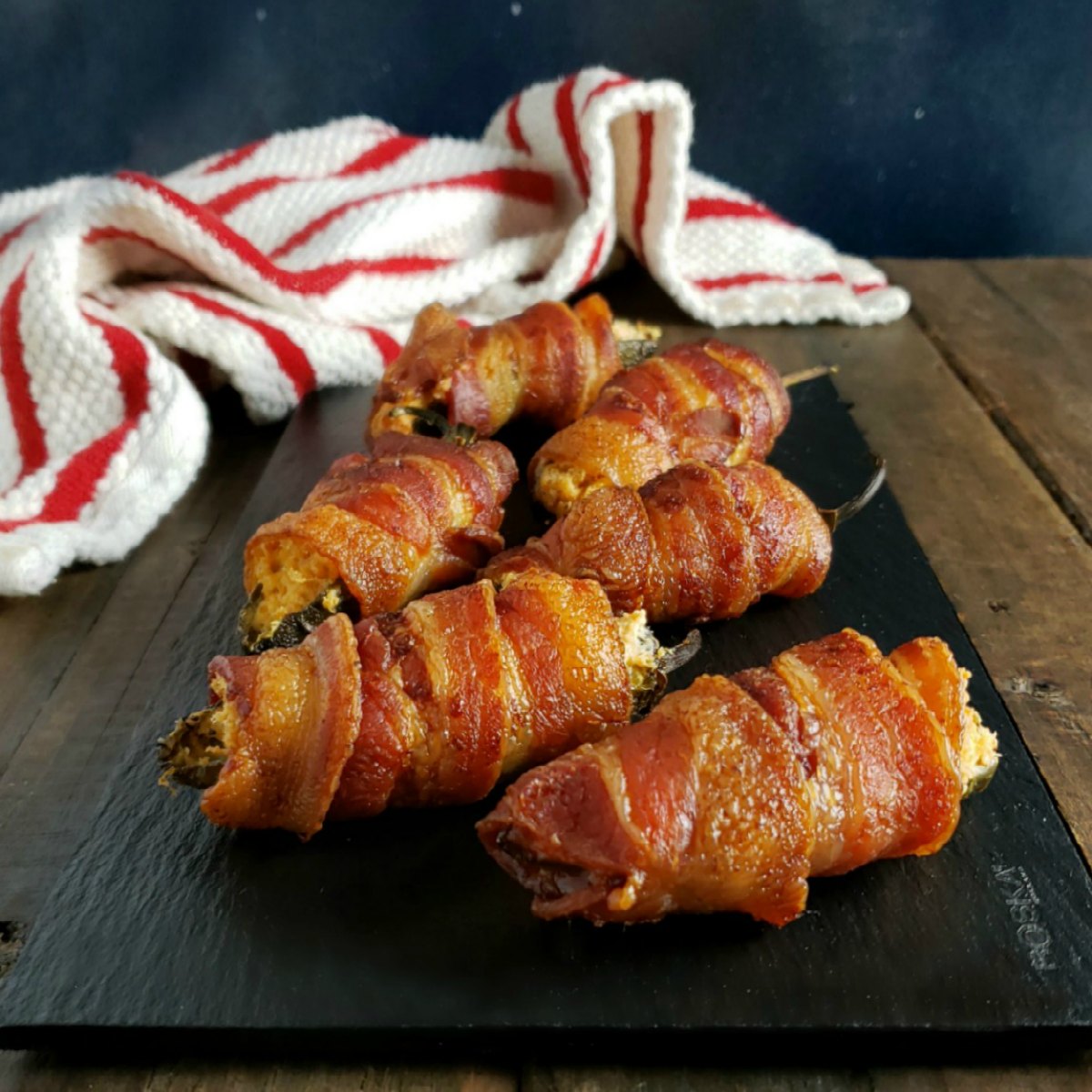 If you’re backing up now and thinking, “Whoa. Crab? On a Frugal blog?”I getcha. I have a few strategies, below, to keep you on budget but first of all, lemme say there’s just a little crab in these. Just enough to taste and it plays so well with the bacon and the spicy jalapeno. And btw, bonus, with all those other flavors, it doesn’t even have to be great crabmeat. As a matter of fact, it would be a bit of a shame if it was!

Now let’s talk about my issue with most Jalapeno Poppers, the downside. Raise your hand if you’ve had this happen: you pick up a lovely little Jalapeno Popper. What looks to be a perfect bit of deliciousness. And that first bite is crunchy raw jalapeno, then bacon pulls off in a chunk, and adding insult to injury, that popper slaps you in the chin with some kind of random, greasy, molten cheesiness. Bummer.

No, huh-uh. It doesn’t have to be that way! These babies are roasted low and slow, with lots of lovin’ in the oven. The jalapeno stays spicy but the natural sweetness comes forward and it’s the perfect bite, wrapped in that beautiful crispy bacon that has rendered over the hot and bubbly (let them cool a minute or two before serving) crab and cheese filling. Each component of this popper just shines in ridiculously awesome deliciousness!

The key to this recipe is that slow cooking; give them a ridiculous amount of time in the oven, smoker or grill and you’re sure to be rewarded with not just an amazing tasting popper but a gorgeous popper and one you can actually bite cleanly through. You can shortcut, directions given, but they’ll only be really good poppers, not ridiculously awesome poppers. Your choice!

When I say give Crab Stuffed Bacon Wrapped Jalapeno Poppers some time, I mean REALLY give them time. The amount of time is going to be dependant on whether or not you use thin or thick-cut bacon.

Keep in mind that none of these time in the oven (or grill or smoker) is actual working time (although you will have to tend the grill or smoker, maybe having a beer or two?) but for a great Jalapeno Popper? I think it’s worth the extra time.

Look for jalapenos about 4 inches long and pretty uniform in size if possible. When filling, a tablespoon scoop works great; add a tablespoon to each jalapeno and you’ll end up with about a tablespoon and a half leftover. Just divide it among any jalapenos that need just a bit more. Don’t wrap the bacon too tightly; it shrinks as it cooks and it can literally squeeze out the filling. You can see that happened here and there on the photo of the poppers on the tray.

If you’re cooking in the oven, use a rack over a lined sheet tray to catch the drippings. The rack is going to allow the air to circulate and cook the bacon on the bottom of the popper and keep it out of the grease.

If you don’t have the time, you can go with a standard 375 degrees F. for 20 to 25 minutes using regular cut bacon (I didn’t test the thick bacon at the higher heat with the shorter cooking time) and these poppers will still be really good.

All said and done, jalapeno poppers aren’t the cheapest thing in the world to make. They are restaurant-quality (I’d say better than any at a restaurant I’ve had) and as a contribution to a cookout or party, they’re a standout. And maybe it will keep you and your family/friends at home rather than out where you know you’d drop a bundle.

You don’t need a lot of the crab, and I just used canned, so it’s doable even on a budget. Pick up any canned fish on sale around Lent (see what’s usually on sale around Lent/Easter) and with the right sale, you’ll probably get it half price or less. It might not be Lent now but keep it in mind.

Both bacon and cream cheese are almost always on sale around any holiday. Pick up cream cheese at a low if you use; it keeps for weeks past the “buy by” date. Bacon is a great item to pick up on sale and chuck in the freezer. It takes up little room and freezes beautifully. With a little planning, there’s really no reason to ever pay full price.

Look for your jalapenos at Aldi where packages of about a dozen are always inexpensive. This recipe uses eight (16 halves) so be sure to have another use for any extra. Maybe double the recipe if it’s a big package or if nothing else, roast, peel, de-seed and toss in the freezer for salsa or make quick refrigerator pickles. Links for recipes are at the bottom of the page.

These go fast at a party, You might want to double or triple, just sayin’. I hope you guys will enjoy them as much as we do!

The best poppers are cooked low and slow, but directions are given for a shortcut version.

Prepare a cooking rack by setting it over a foil lined tray.

Mix together cream cheese and crab meat. Add Old Bay to taste. Refrigerate while you prepare the jalapenos.

Cut Jalapenos in half (if you lay the jalapeno down then turn it by 1/4, so the down side is now vertical, and then make your slice from the top to the bottom, you’ll always have a jalapeno that will lay nicely once it is cut side up.)

Remove ribs and stems – a spoon works nicely. Fill each jalapeno with 1 tablespoon filling. Divide an extra between poppers. Wrap with the bacon, overlapping each wrap by a little. Place all on a rack over a foil lined sheet pan.

Bake at 275 F. degrees (no need to preheat) for forty five minutes to an hour on a rack about 8 inches from the broiler. When the bacon has rendered and picked up a little color and the jalapenos are tender, turn the broiler on high for a few minutes to give the bacon and the cheese a little extra color.

If grilling, use indirect heat and cook with the lid on, if smoking, aim for a temperature of about 275 to 300 degrees F. and cook a little less time.

If you don’t have the time to cook these poppers low and slow, cook at a standard 375 degrees F. for 20 to 25 minutes

If using thick cut bacon, there will be enough (depending on the bacon) for 11 poppers; you’ll need more bacon and cooking is increased to between one and a half to two hours.

And, as I do almost every Friday, I’ll be linking up to Angie’s Fiesta Friday  – this is Number 136, hosted this week by Judi of Cooking with Aunt Juju. I’m sharing also at Throwback Thursday and Saucy Saturdays, too!